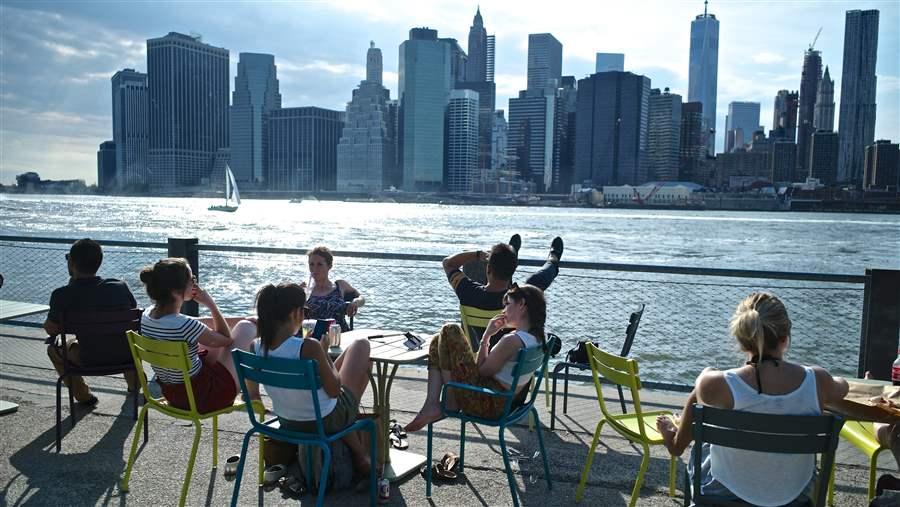 A view of Manhattan from New York’s Brooklyn Bridge Park. Brooklyn is one of the places where population growth has slowed, as more affordable areas in the Sun Belt are growing.

Fewer people are moving into some of the country’s most expensive areas, including San Diego, Silicon Valley, and some Washington, D.C., suburbs. At the same time, places where the cost of living is lower, such as Las Vegas, Phoenix and parts of Florida, are showing bigger population gains, new census data show.

A likely explanation: the cost of housing, which can eat up 30 to 50 percent of a household’s income. It’s the biggest factor for millennials planning a move. It’s also a key factor for retirees looking to downsize. And it helps explain population growth in the Sun Belt, where it’s often less expensive to live.

“Available and affordable housing may be the new piece in the continued gains in Sun Belt counties,” said William Frey, a demographer at the Brookings Institution. “The housing market is motivating some of the growth in Nevada, as well as Florida, and maybe for Arizona, too.”

Arizona’s Maricopa County, home to Phoenix, saw its largest population increase of the decade in 2015, adding 78,000 residents, according to new county population estimates from the U.S. Census Bureau.

For years, cities like Los Angeles and San Diego, as well as Brooklyn, New York, and some Washington, D.C., suburban counties, have enjoyed tremendous growth despite their relatively high costs of living. Silicon Valley has been growing quickly, too.

But their allure may be fading.

And in Brooklyn (Kings County), which has changed from downscale to upscale and pricy in recent years, the population grew by 16,000 in 2015 — 5,000 less than the year before and the smallest increase of the past decade. The borough gained 34,000 people in 2011.

Ronald Flores, a sociology professor at Connecticut College, said New York City has changed since the 1970s, when he was growing up in the South Bronx. Affluent people used to flee the city, he said; now they want to be there — and are driving out the poor.

Several parts of the country where the cost of living is more affordable have enjoyed strong growth in the past year.

Florida dominates the list of counties where growth accelerated last year: Brevard County, which includes Cocoa Beach and Cape Canaveral, saw population growth double, adding 11,000 people, the biggest increase in 11 years. And Hillsborough County, which includes Tampa, grew by 31,000, an increase of 6,000 over the previous year and its strongest growth since 2011. In all, 20 counties in Florida added at least 1,000 more people last year than they did the year before.

Many of the people who moved were prompted by cost-consciousness, said Julie Harrington, director of the Center for Economic Forecasting and Analysis at Florida State University. Especially around Tampa, in Hillsborough County, and Fort Myers, in Lee County, where housing is less expensive than in nearby areas, Harrington said.

But the availability of jobs is also a big factor in the growth or decline of an area’s population.

Renewed job growth in the aerospace industry may be drawing some new residents around Cocoa Beach and Daytona Beach, said Richard Doty, a demographer with the Bureau of Economic and Business Research at the University of Florida.

Areas around Tampa are more retirement-oriented, Doty said, although they also have new jobs for young people: a new Amazon warehouse hired a thousand people last year and plans to expand. “Southwest Florida was particularly hard-hit during the recession, so it’s really nice to see it coming back,” Doty said.

Moving with Housing Costs in Mind

While many factors, such as jobs, go into a decision to move, young people think of price first, according to a survey of millennials released last year by the Urban Land Institute.

“In considering a future residential community, cost of housing is the most important factor,” said Stockton Williams, director of the institute’s Terwilliger Center for Housing.

The cost of housing has become an increasingly urgent issue for many, as record numbers of people spend too much on housing, forcing them to cut back on health care and other critical expenses, according to a study released last year by the Harvard Joint Center for Housing Studies.

Empty nesters, another large component of the population, are also moving with lower costs in mind as retirement approaches.

Richard Albury, a 54-year-old software developer whose oldest child is now in high school, is planning a move from the Virginia suburbs of Washington, D.C., to Cocoa Beach, where a typical home costs $160,500. He now works from home for a New Jersey-based company so he can live anywhere.

“Housing costs are certainly a factor. The D.C. area is extremely expensive,” Albury said, adding that he’s been shopping and thinks he can find a large house with a pool near Cocoa Beach for about $320,000, half the price of a similar house in the Virginia suburbs.

Moving can make sense for renters, too.

While relatively low housing prices may be drawing new residents to the Sun Belt, there are signs that increased demand may already be pushing prices higher.

In Brevard County, Florida, home prices rose 13 percent between mid-2014 and mid-2015, according to the Federal Housing Finance Agency’s home price index. (Median prices are based on preliminary 2015 values from the National Association of Realtors.) And they rose 10 percent in the Las Vegas area, where the median price is $216,800.