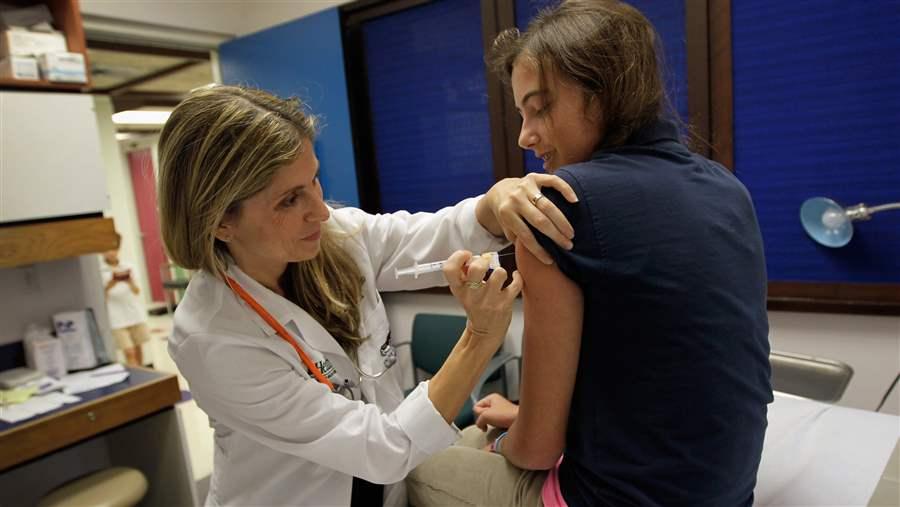 A Miami pediatrician administers an HPV vaccination to a 13-year-old girl. Vaccination rates remain stubbornly low despite state efforts to raise them.

Despite state efforts to raise vaccination rates, public health officials say that for a variety of reasons, mainly wariness over the HPV’s association with sex, parents and especially doctors have not embraced the potentially life-saving vaccine.

According to the Centers for Disease Control and Prevention, as of 2014, only 40 percent of girls ages 13 to 17 had completed the three-vaccine course of HPV immunization. (And just 22 percent of boys had done so.) That’s well short of the 80 percent goal set in 2010 by the federal government in its Healthy People 2020 report, which established health objectives for the nation.

Even states that require HPV inoculation for school admission or mandate that schools teach students about the virus have fallen far short of the federal benchmark.

“We think the rates are dismally low and very alarming,” said Amy Pisani, executive director of Every Child by Two, a nonprofit that aims to reduce instances of vaccine-preventable illnesses. “We clamor and clamor for a vaccine to get rid of these terrible diseases and yet we aren’t implementing them.”

Some states fare significantly worse. In Tennessee, for example, the vaccination rate for girls was 20 percent — the lowest rate in the nation — and 14 percent for boys. Even the best performing state, Rhode Island, one of only two states plus the District of Columbia that require HPV inoculation for school admission, has rates well below the national goal, with 54 percent of girls and 43 percent of boys receiving all three HPV vaccinations.

Particularly vexing to public health experts is the fact that the HPV vaccination rate lags far behind that of two other vaccines recommended for the same age group. The national rate for adolescents receiving the Tdap booster (to prevent tetanus, diphtheria and acellular pertussis) is 88 percent, and for the vaccine to prevent meningococcal diseases, the rate is 79 percent.

HPV is a group of more than 150 related viruses, which together are the most common sexually transmitted infections in the United States. According to the CDC, about 79 million Americans are now infected with HPV and 14 million people become newly infected each year. Nine out of 10 HPV infections resolve themselves within two years, mostly with no symptoms whatsoever, but 10 percent of the infections lead to cancer, especially cervical cancer but also cancers of the vulva, vagina, penis, anus and throat. It takes years, if not decades, for a person with HPV to develop cancer.

The vaccines are nearly a hundred percent effective in preventing precancerous tumors (tumors that are not growing aggressively, killing surrounding tissue or spreading to other parts of the body, but are considered likely to do so), according to the CDC. The Advisory Committee on Immunization Practices (ACIP), which makes inoculation recommendations to the U.S. Department of Health and Human Services, recommends the vaccine for boys and girls at 11 or 12, likely before they become sexually active and possibly exposed to HPV.

ACIP recommended the vaccine for boys in 2011. Boys were not included in ACIP’s original recommendation for HPV vaccines because it took longer for medical researchers to find a reliable way to detect HPV-related precancerous tumors in males. ACIP now recommends the vaccine for women up to age 26 and males up to 21. In women older than 26 and men older than 21, the vaccine is much less effective.

That the HPV vaccine requires three inoculations over several months contributes to the low vaccination rates. CDC data show a dramatic drop-off between the first and last doses. But health policy experts also point to other factors, especially the discomfort over the association between the virus and sexual activity.

HPV is most commonly spread through sexual relations. When the vaccine was first approved by the Food and Drug Administration in 2006 and recommended for all adolescent girls the following year, opponents argued that the vaccine would prompt young people to start engaging in sex by freeing them of the fear of contracting HPV.

At least one study shows no uptick in sexual activity in girls who have been immunized. Nevertheless, the concern prompted the Texas Legislature in 2007 to overturn the executive order issued by Republican Gov. Rick Perry, earlier that year, requiring all girls entering the sixth grade to be immunized.

The same fear doomed immunization bills in a number of other states. The exceptions were Rhode Island, where both boys and girls entering the seventh grade must be inoculated; and Virginia and the District of Columbia, where girls entering the sixth grade must be immunized — but not boys. Their laws were passed when the recommendation applied only to girls and have not been altered to reflect the change.

Immunization supporters also hurt their own cause with ill-advised strategic decisions. For example, some state legislators soured on immunization requirements after Merck & Co., the manufacturer of the first HPV vaccine, mounted an aggressive lobbying campaign in favor of the vaccine, prompting a backlash among parents, doctors and consumer advocates.

Walt Orenstein, a professor of medicine at Emory University and the former director of the National Immunization Program at the CDC, said federal and state public health officials also erred by focusing the early public information campaign on the sexual transmission of the virus, rather than on the vaccine’s life-saving benefit.

“It should have been pushed out as an anti-cancer drug,” Orenstein said. “People didn’t understand why their children needed this drug when they were still years away from being sexually active.”

Many who study immunizations think that too few doctors and nurse practitioners discuss the HPV vaccine with parents in a way that conveys its importance. Some parents and providers are reluctant to engage in conversations about sex — especially when the child is a preteen.

Health care providers “believe it will take a lot of time, that parents either aren’t interested or would give them a hard time about it, and physicians don’t want to talk about sex when indeed they don’t have to,” said Noel Brewer, who does research on immunizations at the University of North Carolina and who has studied parental and provider attitudes toward HPV.

Pisani, the director of Every Child by Two, witnessed that attitude firsthand.

“My son, when he turned 11, we went to see our pediatric nurse practitioner,” Pisani said. “She said, ‘He’s due Tdap and meningococcal. Do you also want to get HPV?’ She made it sound optional, as though it was no big deal.”

Pisani said a pediatrician talked her cousin’s 16-year-old daughter out of getting the vaccine until she was 26.

Aside from the sex-related issues, policymakers say medical providers may feel the HPV vaccine is not urgent because symptoms do not surface for many years and the virus poses no risk of being spread in an elementary or middle school, where students usually are not sexually active.

But Brewer’s research demonstrates that, contrary to what doctors may believe, parents are interested in the vaccine and a strong recommendation from a physician correlates highly with youngsters getting the full course of vaccinations.

Although health policymakers want to see more vaccinations, few argue in favor of adopting mandatory state vaccination laws. Such laws, they say, often prompt a backlash, as in Texas, and can cause the opposite of the intended effect by heightening suspicion and resistance.

Denying children entry to school when they aren’t dangerous to anyone else is poor public policy, said Debbie Saslow, director of cancer control intervention, HPV and women’s cancers at the American Cancer Society.

“Let’s say you’re in Tennessee and 80 percent of boys are not vaccinated and 60 percent of girls aren’t and you open school, and suddenly you have to keep more than half the school home,” she said. “They have low SAT scores and low grades and now you’re making them sit at home? You’d be guaranteeing yourself a backlash.”

Those who track immunization rates say mandatory immunization only helps marginally and, in the case of HPV, only in places where the rates were not abysmally low. “Mandates are a last resort after you’ve built consensus that they are a good thing to do,” Orenstein said.

Instead, they believe the best way to raise immunization rates is to better educate health care providers. Much of that education occurs through a federally supported process: Through AFIX (assessment, feedback, incentives and exchange), state and local health officials visit pediatricians and internists who routinely administer immunizations to examine their procedures and suggest improvements. To varying degrees, most states participate in the process.

One promising strategy is for practitioners to send out reminders that children are due for their vaccinations or that they failed to come in for an appointment when they were due.

Health policy researchers say “reminder and recall” notices are one of the most reliable means of keeping patients up to date on vaccinations. Yet the practice is still not that widespread among doctors.

“Somehow our dentists and vets know how to do it, but I never get anything like that from my doctor,” Orenstein said.