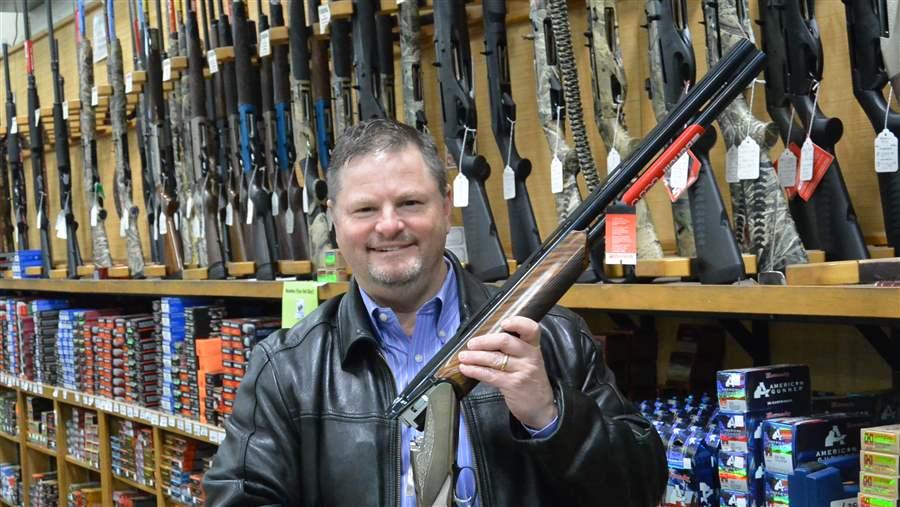 Mike Coombs, the owner of an outdoor store in Seattle, opposes the city’s gun tax. But city leaders say it will fund medical research on reducing gun violence.

SEATTLE — To Mike Coombs, owner of the Outdoor Emporium, a hunting, fishing and camping store, Seattle’s gun tax is unfair and aimed at driving him out of the city, if not out of business. To Seattle City Councilor Tim Burgess, the tax is a good way to fund medical research on reducing gun violence injuries.

The two represent the opposing poles in the debate over Seattle’s controversial tax on guns and ammunition that took effect Jan. 1 and puts this city at the center of a dispute over whether municipalities can tax firearms to pay for what they see as a public benefit or states alone have the power to regulate and tax guns.

The dispute, which emerged briefly last year in Baltimore and continues in Cook County, Illinois, involves issues such as whether the taxes are designed to suppress gun sales or drive sales out of a city or county, and whether gun violence is a public health issue that justifies taxes on firearms and ammunition to help pay for their consequences in the same fashion as taxes on cigarettes and alcohol.

Here — where the city collects a $25 tax on every gun sale and between 2 cents and a nickel on every round of ammunition, depending on the caliber — Burgess and Coombs are equally wedded to their positions.

The $300,000 to $500,000 that the tax is expected to raise this year is earmarked to fund a study of gunshot victims, including medical and behavioral interventions, by the University of Washington and Harborview Hospital’s trauma center, which treats most of the city’s gunshot victims.

To Burgess, it’s good public policy. “Designing a program where doctors, social workers and case managers attempt to help people who have been injured by firearms is not some wild-eyed, kooky, strange thing,” he said. “It’s what we would do for any kind of health challenge.”

To Coombs, the tax is not the only way the city can improve public safety. “If they want to help with safety,” he said of city leaders, “they should help me pay for safety classes.”

He said he suspects an ulterior motive behind the tax: to reduce gun sales or drive sales out of the city. This would make it harder for people to exercise their Second Amendment rights, he said. Business is down since the tax took effect, though by how much he wouldn’t say. Already, one other store, Precise Shooter, closed its Seattle location and decamped to nearby Lynnwood.

If the city wants to pay for research, Coombs suggested, it can use revenue from the sales tax on guns and ammunition, which already exists. But that revenue is declining, he said, as sales fall because of the new tax. 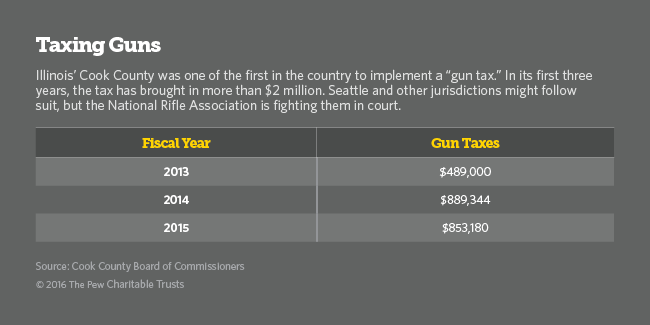 The arguments also are playing out in court. Gun-rights groups, led by the National Rifle Association, are challenging Seattle’s tax on “state preemption” grounds. They argue that the city has no right to regulate firearms, because gun regulation is under state purview.

City officials say they are not trying to “regulate” guns, but simply to tax them. City and local taxes are allowed under state law.

In their challenge, gun-rights advocates cite an earlier case, in which Seattle’s attempt to ban guns from playgrounds and other child-friendly parks was thrown out on state preemption grounds. In December, however, Judge Palmer Robinson of the King County Superior Court ruled in the city’s favor on the gun tax, calling it a “lawful exercise of Seattle’s taxing authority.” The NRA and others are appealing.

“There is no way in the world that this so-called tax is in fact a tax,” said Steve Fogg, a Washington attorney who is representing the gun-rights groups. “It is a straight-up piece of regulation that is designed to inhibit the merchant sales and use of firearms in the city of Seattle. We have a very strong clause in state legislation … only the state can regulate firearms.”

In Cook County, Illinois, home to Chicago, where gun-related deaths have doubled in the first three months of 2016 compared to last year, a $25 gun tax also is being challenged in court and debated in the state Legislature on Second Amendment grounds.

The tax, which was created in 2012 and has raised more than $2 million for the county’s general fund, wasn’t designed purely to discourage sales, but also to help underwrite the consequential costs of gun violence, county officials say.

“It is meant to raise consciousness about the potential impact of these weapons and help pay for the negative societal costs that the dangerous product has on society,” said Frank Shuftan, director of communications for Cook County Board President Toni Preckwinkle.

The cost of treating a gunshot victim in Chicago has been estimated at about $52,000. There are currently no gun shops in the city of Chicago, Shuftan said, although there are some elsewhere in the surrounding county.

Illinois state Rep. Jerry Costello II, a Democrat, has sponsored a bill that would prevent counties and cities from passing a tax like Cook County’s. He has the backing of the NRA’s lobbying arm, which accuses cities and counties that levy the tax of attempting to “make an already expensive product even more so, potentially pricing law-abiding citizens out of exercising their Second Amendment rights.”

Baltimore and the state of Missouri considered a tax on gun sales last year to pay for police body cameras before abandoning the idea amid opposition.

Backers of Seattle’s gun tax justify it as a way to underwrite the costs of researching and possibly treating an issue of public health — comparable to using cigarette or alcohol taxes to study the effects of and remedies for smoking and alcoholism.

Dr. Ali Rowhani-Rahbar, researcher and professor at the University of Washington School of Public Health, is spearheading the study aimed at trying to reduce gun violence by diminishing the number of repeat gunshot victims.

An April 2015 study by Rowhani-Rahbar and others found that gunshot victims who survive an initial gunshot wound are 21 times more likely to get shot again and five times more likely to die than those wounded by a weapon other than a gun or who were hurt in other kinds of accidents.

Research decades ago on alcohol abuse found a “bedside brief alcohol intervention” with patients who were hospitalized as the result of alcohol-induced incidents could reduce by 50 percent the reoccurrence of alcohol-fueled hospitalizations.

Rowhani-Rahbar said such interventions with medical and behavioral professionals have now become standard at hospitals nationwide. Rowhani-Rahbar and his team of researchers want to marry that type of intervention with gunshot victims for the new study, which began a few weeks ago.

The trial study will provide a brief hospital intervention coupled with access to services, such as education, medical help, counseling and housing for a group of randomly chosen gunshot survivors, while leaving a control group with the usual care but without the services, to see whether intervention can make a difference.

Many gunshot victims are men in their 20s and 30s, Rowhani-Rahbar said. “With a group so vulnerable, you have to do something.”