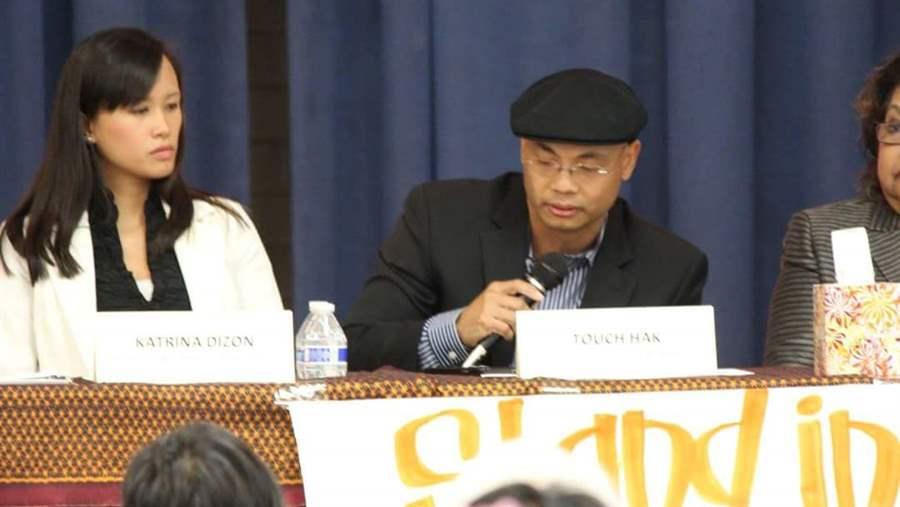 Touch Hak, who came to the U.S. as a refugee from Cambodia when he was a child, speaks at an immigration panel. Now, because of his criminal record, he faces deportation to a country he barely remembers.

LONG BEACH, Calif. — When he was 2, Touch Hak fled with his parents from the “killing fields” of Cambodia, ultimately landing in the slums of Stockton in 1985. His parents were peasants, he says, traumatized from the war and ill-equipped to help their children deal with inner-city America. To survive, Hak joined a gang. Bloodshed and gunplay were the norm. By the time he was 28, he was doing time in federal prison for selling drugs.

Now 38, Hak says he has turned his life around: He’s off drugs and out of prison, working in a factory and reconnecting with his teenage daughter. But he faces a new challenge: Within the next couple of years, because he has a criminal record and is not a U.S. citizen, the former refugee could be deported to the country of his birth, where he knows no one.

“How will I survive there?” said Hak, who is appealing his case. “I’m not a farmer kind of guy. I’m a city boy. America is my home. I’ve lived here for 30 years.”

Amid a national debate about resettling refugees in the U.S., cases like Hak’s illustrate what can go wrong when there aren’t enough resources to help traumatized refugees and their families successfully integrate American society.

Today, few states have programs to help them. Some states, such as Maryland, Massachusetts, Minnesota and Utah, welcome refugees, offering extensive services to ease their transition. Many others, such as Georgia, Indiana and Maine, have tried to halt the arrival of new refugees.

“Political leaders can have an influential role in calming the public and providing aid to refugees,” said Linda Trinh Vo, a professor of Asian-American studies at the University of California, Irvine. “They can set an atmosphere that’s more welcoming to refugees. I think that’s crucial.”

More often than not, the refugees’ successful adaptation to new lives here depends greatly on the organizations that sponsor them, such as the Mormon church, Catholic Charities USA and Lutheran Services in America. But success can vary widely, depending on where they live, immigration analysts say.

The Federal Reserve recently tracked Hmong immigrants in predominantly rural Fresno, California, and urban St. Paul, Minnesota. Fresno had few service providers; St. Paul had an abundance of agencies or services, many of them provided by church groups, which helped the newcomers with language, cultural barriers, and navigating the school system.

The result? Hmong-American students in St. Paul attended college at higher rates than in Fresno, according to Melany De La Cruz-Viesca, a demographer and assistant director of the UCLA Asian-American Studies Center.

They are the lucky ones.

Southeast Asian refugees are more likely to be poor, less educated, and suffering from trauma than other Asian immigrant groups, according to De La Cruz-Viesca. Their lives are far from the stereotype of the “model minority” of Asian-American immigrants in the U.S.

Since the end of the Vietnam War in 1975, more than a million Southeast Asian refugees fleeing Vietnam, Laos and Cambodia have settled in the U.S. — the largest refugee group ever to settle here.

Many were children, part of the so-called 1.5 generation, born in their home countries or in refugee camps. Hak is one of the 15,000 members of this group of Southeast Asian refugees who have been served final deportation orders, even though, like him, they are green-card carrying legal residents. (Two thousand have been deported.) Many are being deported for nonviolent crimes they committed when they were young, according to the Southeast Asia Resource Action Center (SEARAC), a Washington, D.C.-based advocacy group.

Assimilating proved to be a rough ride for many Southeast Asian refugees, with few federal and state resources available. Often bullied for being outsiders, some found solace and protection in street gangs — only to find that crimes they committed in their youth could mean abrupt deportation for them later on. Because of stringent immigration policies enacted in 1996, immigrants from Southeast Asia are three to four times more likely than others to be deported for old convictions, according to a 2015 report.

The laws made it easier to deport documented immigrants for infractions that were once considered misdemeanors, such as public urination, selling $10 worth of marijuana, or writing a bad check. The laws also made it possible for immigrants to be deported for crimes committed before 1996.

People are being deported to countries where they might not be able to write in their native language, said Ben Wang, co-chairman of the California-based Asian Prisoner Support Committee. “Some of these countries won’t accept them back. They’re in limbo for the rest of their lives.”

A Lesson in Resettlement

Refugee resettlement is a contentious topic. In January, a U.S. Senate bill that would have prohibited Syrian and Iraqi refugees from settling here was blocked. Last week, Tennessee lawmakers introduced a bill that would require the state’s attorney general to sue the Obama administration for allegedly violating the Refugee Resettlement Act.

They do not want to accept any Syrian refugees, arguing that their state is being forced to pay to care for refugees and that the federal government is required to consult with the states before sending refugees their way.

When considering how to handle the Syrian refugee crisis, the plight of the 1.5 generation of Southeast Asians should serve as a cautionary tale for states, say immigration rights workers like Katrina Dizon, SEARAC’s immigration policy manager.

“Restricting support for these traumatized communities only leads to the growth of an increasingly marginalized population,” Dizon said. What is needed, she said, is investment in refugee communities and a “long-term integration strategy that recognizes the unique barriers these communities face.”

One of the challenges: Many Southeast Asian refugees don’t understand the importance of securing citizenship, which would protect them from deportation and secure Social Security benefits. Others don’t have the financial resources to obtain it. For older refugees with limited English skills, naturalization can be a daunting process, Dizon said.

Long Beach is a gritty working-class city, land of fuel tanks and strip malls. Today, it is home to the largest settlement of Cambodians who fled the genocidal Khmer Rouge regime. According to a 2005 Rand Institute study, nearly two-thirds of the Southeast Asian refugee population in the city struggled with post-traumatic stress disorder. More than half have experienced major depression. Thirty-six percent of Cambodians living in Southern California live below the poverty line, according to the Asian Pacific American Legal Resource Center, a Washington, D.C.-based research and advocacy group.

In the city’s Cambodia Town, the trauma ricochets across generations. And one group of young activists is intently focused on doing something about it.

At the offices of Khmer Girls in Action (KGA), tucked upstairs in a ramshackle building, the doors are kept locked — the better to keep out certain elements. (The group shares the building with several substance abuse treatment agencies.) Inside, amid posters of Che Guevara, the revolutionary leader, there are signs that read “SCHOOLS NOT PRISONS” and “YOUTH POWER.” Taped on one wall is a large map of Los Angeles County, with contact information for government officials.

The group was founded in 1997 to help Cambodian-American girls — 1.5-ers and second-generation children — take charge of their reproductive health. But it quickly morphed into a vehicle for them to become “social justice warriors,” hell bent on improving the lives of others in their community. Many are the children of 1.5ers who now face deportation. According to a 2011 KGA-UCLA survey, more than a third of Southeast-Asian-American youths in Long Beach know someone in their family or community who has been deported.

Its executive director, Lian Cheun, is a 1.5-er born in Cambodia who resettled in a poverty-stricken neighborhood in Oakland. “We left one war zone and ended up being dropped in another,” she said.

Cheun said she lucked out. She had a high school counselor who pushed her to go to college. Now she’s focused on coaching other Southeast Asian youths to do the same. Other KGA programs develop leadership skills and encourage working with educators to establish policies in the Long Beach school district to help students stay in school. Last fall, KGA worked with school administrators to launch a teens-only health clinic.

Hak said he would have been deported by now if it weren’t for one thing: His brother needed a kidney transplant. So for the past few years, he’s worked with pro bono lawyers to stay in the country so he could donate one to him. It turned out he wasn’t a match. But he is participating in a fair-exchange program, through which he will donate a kidney to someone else so that his brother in turn can get one.

He was initially granted a one-year stay, then his deportation order was extended a year, and if he’s accepted into the transplant program, it will be extended another two years.

That’s the best that he can hope for, said Hak, who lives in Santa Ana. He says it’s “highly unlikely” he’ll be able to stay in the country, although his entire family now lives here. They’re all U.S. citizens. He said he didn’t realize until it was too late how important it was that he become one, too.