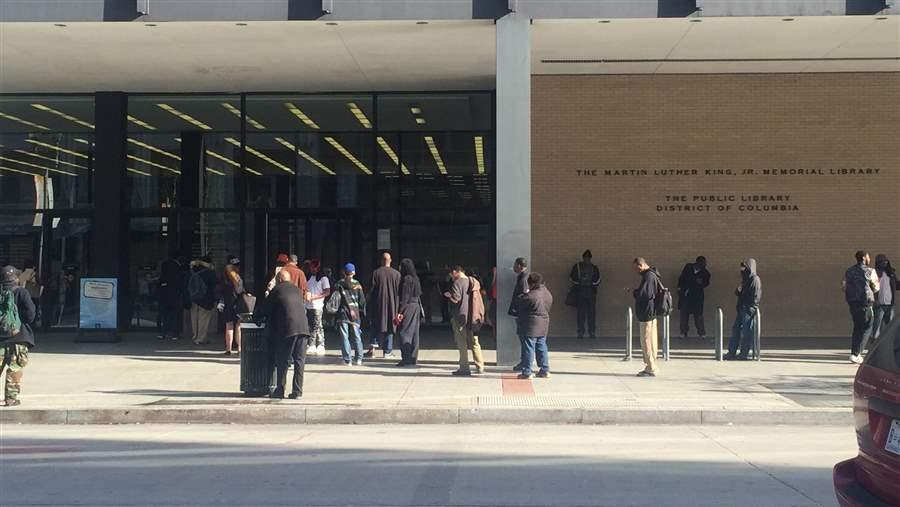 Some of the people waiting to enter Washington, D.C.’s central library are homeless. A growing number of public libraries are trying to do more to help them.

WASHINGTON — Every weekday morning, people line up outside the central library in the nation’s capital and wait for it to open. Last Monday, about two dozen people, some carrying shopping bags or large backpacks, clustered around the entrance. At 9:30 sharp, the doors opened and they trooped in.

Public libraries have long been havens for people with nowhere else to go. Now, a growing number of library systems are adding services for patrons who are homeless, hungry, or suffering from drug addiction or mental illness. For the District of Columbia, that means hiring a social worker, partnering with nonprofits and organizing social hours.

The library can be part of the city’s efforts to reduce homelessness, said Jean Badalamenti, the social worker for the system here. “I see the library as playing a role in that, since this is where people are,” she said.

Libraries in the Internet age offer more than books and computer access. On a typical day, Washington’s central library, the Martin Luther King Jr. Memorial Library, less than a mile from the White House, hosts all types of events, from free tax preparation assistance for adults to poetry workshops for teens.

Increasingly, public libraries also are providing social services, such as serving children free lunches during the summer, said Sari Feldman, president of the American Library Association. Reaching out to patrons who don’t have a safe place to sleep at night is part of that trend.

Libraries are safe, open for long hours, and offer everything from public bathrooms to a place for people to search for online job listings. “I think libraries are fully equipped and ready to address community needs, and this is another community need,” Feldman said.

Homelessness has fallen nationally since 2007. But in big cities such as Los Angeles, New York and Washington, the numbers keep rising, according to the latest federal statistics. One in a hundred Washington residents is homeless, according to the nonprofit Metropolitan Washington Council of Governments’ latest tally, and the homeless population has increased 11 percent since 2011.

Public libraries don’t track patrons’ housing status, and librarians say there’s no way to tell whether someone lacks housing just by looking at them. But many library regulars in low-income neighborhoods and central cities don’t have a home or a job to go to.

Some patrons who lack housing also struggle with mental illness or addiction, and need more than a quiet place to study or read. They might have breakdowns in the reading room, start fights in the lobby or sneak into the bathroom to use drugs.

During the recession, behavioral incidents spiked in the main branch of the Salt Lake City Public Library, said Tommy Hamby, the library’s adult services coordinator. “We saw a lot of what our manager called ‘new homeless,’ ” he said: panicked people who had just lost their homes and were in crisis mode.

Public libraries have expanded services in a number of ways. San Francisco was the first to hire a social worker, in 2009. Washington and Denver have followed suit. The Dallas Public Library has used grant money to station two AmeriCorps volunteers behind a help desk — as well as answering questions, they might help proofread resumes or help with food stamp applications — and to hire someone who refers patrons to social services.

In 2012, the Salt Lake City Public Library began stationing three outreach workers from Volunteers of America, Utah, a nonprofit, at its main branch. “When that happened, it really, fundamentally changed the way we engaged with our patrons,” Hamby said.

The outreach workers were trained to work with people experiencing mental illness, addiction and homelessness. They do everything from giving directions to nearby food banks to escorting victims of domestic violence to battered women’s shelters and helping patrons get state ID cards. “I helped a lady get a divorce decree once,” said Ethan Sellers, who leads the Volunteers of America library team.

They also can step in to calm people in crisis and have trained library staff to do the same. “Our police calls went down dramatically, our security calls dropped dramatically,” Hamby said.

Effective programs also involve a philosophical shift. One of the first things the Dallas library did, for instance, was to require staff to take turns greeting all patrons at the door. Treating homeless people with respect was the first step, said Mary Jo Giudice, the library director.

Joe Borrego first walked into the Dallas library two Thanksgivings ago. Originally from South Dakota, he had lost his job in the oil fields, then fallen out with his brother and lost a place to stay.

A pamphlet distributed by the library help desk helped him figure out the basics, such as where to find food. But he says that encouragement from library staff did more to get his life back on track. “Without that additional push, I’d probably still be sitting there on the homeless side of things,” Borrego, 37, said.

He started attending coffee hours the library arranges to help regular patrons and staff get to know each other. A lifelong guitar player, he started taking piano lessons — one of the arts classes the library introduced based on feedback from coffee hour attendees, most of whom are homeless.

Staff members encouraged him to show off his guitar skills at open mic nights around the city and to spend his nights at the Bridge, a homeless shelter and recovery program, rather than on the street.

Borrego said that the activities forced him to socialize and have faith in people again. He’s now working as a busker, playing guitar on street corners and earning enough money to pay rent on a shared apartment.

Washington’s library introduced coffee hours inspired by Dallas’ model in November. And San Francisco’s library has found another way to welcome homeless patrons: by hiring them. Five people who are working their way out of homelessness now make rounds of the building, offering advice to their peers and helping enforce library rules.

Not every person who is homeless wants help. Some Dallas library patrons who are homeless mock the library’s efforts, Borrego said. And not every library can afford to hire a social worker, although most can bring in local community organizations for occasional workshops and events.

Libraries also have to contend with how the presence of down-and-out people can make some more affluent patrons uncomfortable. Take this online review of the Salt Lake City Public Library’s main branch, from a woman called Shauna: “I don’t feel comfortable walking outside by myself, especially at night, because of beggars and homeless people.”

The Salt Lake library raised some eyebrows when, in 2014, it briefly considered staying open 24 hours a day to give residents a safe haven. “Why not improve existing services for the homeless and return the downtown library to taxpayers,” one Salt Lake Tribune reader commented. The idea was eventually rejected as too costly.

When Salt Lake’s librarians hear those kinds of complaints they explain that libraries are open to everyone, including people who don’t have a home, Hamby said.

Some patrons conflate homelessness with other issues, Dallas’ Giudice said. “The people who live downtown are constantly accosted by people panhandling — which is illegal” in Dallas. But that’s not something that happens in the library, and street beggars aren’t necessarily homeless.

The Dallas library had a daylong forum for area residents, business owners and patrons experiencing homelessness last May and will have another, focused on mental illness, this year.

Libraries do have codes of conduct that allow them to temporarily eject or suspend patrons for minor offenses, such as falling asleep or smelling bad, and to ban them for longer periods for serious offenses, such as doing drugs.

But public libraries are public spaces, and library staff members like Washington’s Badalamenti want to preserve that. “The public library is one of the last places where people from all different backgrounds can be together,” she said.

At the end of this year, Washington’s central library will shut its doors for a major renovation. It’s unclear where many patrons will go during the three-year overhaul — or where city vans that transport people downtown from far-flung homeless shelters will stop.

The library’s jutting upper floors create a covered, outdoor space that’s a perfect drop-off point. From here, homeless people can easily fan out across the city in search of free meals, some money, or their case workers.

Families can stay in Washington’s homeless shelters 24 hours a day, and the city maintains a drop-in day center for individuals in the Northeast of the city, near the National Arboretum. There isn’t a plan to open more such day centers, said Dora Taylor, public information officer for the Department of Human Services.