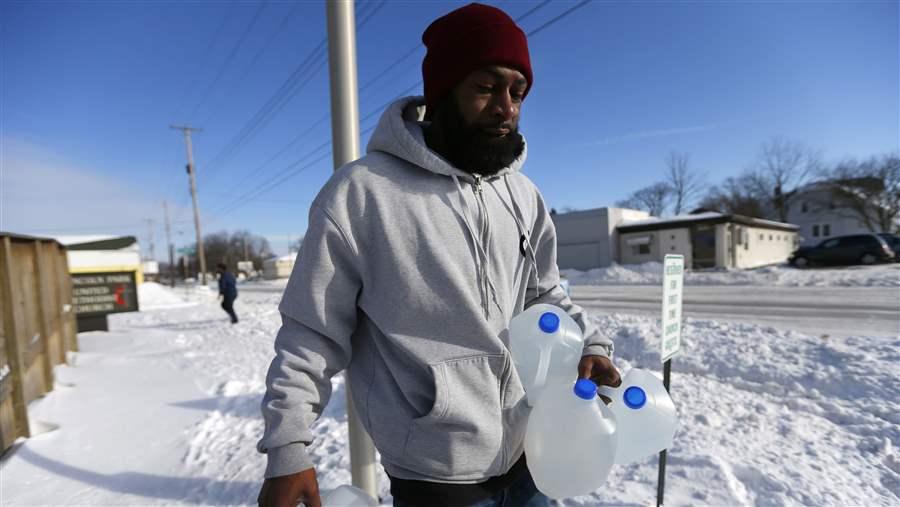 A man carries free water distributed by a church in Flint, Michigan. The water crisis in Flint, where old pipes leached out lead into water supplies, has raised new worries that cities aren’t keeping up with maintenance and improvements.

David Trovato, the council president, acknowledged that any hint of a water quality emergency “would scare the hell out of me, too.” But there is no emergency in Woodbury.

New Jersey has designated Woodbury’s water system as “emergent” because it can’t meet the need for water at peak demand times. So this town of 10,000 across the Delaware River from Philadelphia is considering selling its water system to a private company.

More than 2,000 municipalities have entered public-private partnerships for all or part of their water supply systems, according to the National Association of Water Companies, which represents private water companies like Veolia North America and American Water. Partner municipalities include San Antonio; Akron, Ohio; and Washington, D.C. Miami-Dade County is considering partnerships for three water facilities, including one built in 1924. And Wichita, Kansas, is starting to study the issue.

The water crisis in Flint, Michigan, where old pipes leached out lead into water supplies, has raised new worries that cities aren’t keeping up with maintenance and improvements.

Maintaining, operating, replacing and upgrading the nation’s water infrastructure could cost $2.8 trillion to $4.8 trillion through 2028, according to the U.S. Conference of Mayors. The American Water Works Association estimates that replacing and expanding water pipes alone would cost $1 trillion through 2035. And the American Society of Civil Engineers gives U.S. water infrastructure a D grade. Greg DiLoreto, past president of the ASCE, estimates that systems nationwide would need $84 billion in improvements by 2020 to get to a B grade.

Some cities are turning to private industry for help.

“There’s a desire to bring more private capital into the water world,” said Diane VanDe Hei, executive director or the Association of Metropolitan Water Agencies, which represents the largest municipal water utilities in the country. “Money is needed for aging infrastructure, for treatment plants, for pipes. The more money you can make available, the more you can do.”

Public-private partnerships (known as P3s) take many forms. Companies can take over maintenance and operation of an entire system, or parts of it, for a large one-time fee plus future profits. Or the companies can design, build and operate a new water and wastewater treatment plant, for instance. P3s have been used for years in transportation, but are relatively new in water.

A recent USA Today analysis of data from the U.S. Environmental Protection Agency found that nearly 2,000 water systems across all 50 states have lead levels in excess of federal limits. Lead can cause developmental damage, particularly in children.

Municipalities with little money, like Flint, can’t afford to improve their systems, or issue bonds to finance improvements because their bond rating is so low. They’d have to pay higher interest rates on that debt. In the case of Flint, the city chose to switch water sources from the Detroit River to the Flint River to save money, and then didn’t properly treat the water to avoid lead leaching from old lead-lined pipes.

But even cities that are not in financial difficulty are choosing to sell some or all of their water systems. Miami-Dade County Mayor Carlos Gimenez said he “doesn’t want to operate anything,” and has opened the door to public-private partnerships for water and other services.

Cities also are facing other water-related problems, such as how to keep storm water from overwhelming wastewater treatment plants and slopping untreated sewage into rivers, streams and the ocean. Rising sea levels and rapid population growth will compound the challenges.

But governments are spending less on water infrastructure when they should be spending more, says Bill Reinhardt, editor of Public Works Financing, a newsletter that follows the industry.

According to a 2015 survey by the U.S. Conference of Mayors, mayors of cities larger than 30,000 said their No. 1 concern was underinvestment in infrastructure. Their top need was mass transit (22 percent), followed by roads (20 percent) and water, including wastewater and storm water (18 percent).

“It takes a big thing like Flint to get people to worry about water,” said Todd Herberghs, executive director of the National Council of Public Private Partnerships in Washington. “Roads they see; roads they use. But water? People really take it for granted. People see it as cheap and just, well, just there.”

Water partnerships can be controversial.

Residents often are concerned about losing control over water supplies, and fear that a private company will impose rate increases without voter input. Food & Water Watch, a nonprofit in Washington, opposes P3s because, it said, they don’t result in cost efficiencies and can be more expensive for consumers than public systems. For their part, unions are concerned about protecting city workers’ jobs.

But DiLoreto, the former ASCE president, said rate increases are inevitable, with or without partnerships. DiLoreto said many years of insufficient spending on infrastructure has put cities in the position they are in today.

The average monthly water bill jumped 6 percent in 2015 and 41 percent since 2010, according to a survey of the nation’s 30 largest cities by Circle of Blue, a nonprofit research firm focused on natural resources. Atlanta, which has a publicly run system after experimenting with a private partnership, has the nation’s highest combined monthly water-sewer bill at $325.52 for a family of four.

Despite those increases, more rate hikes for consumers will be necessary to pay for improvements, DiLoreto said. Americans will pay hundreds of dollars a month for cellphone and cable TV service, but expect water and sewer rates to be much lower, he said. That’s because water bills have been kept artificially low by local governments under pressure from the public, he said.

“You and I have to decide that having clean, safe drinking water is important,” he said. “And we have to be willing to pay the money to get that done.”

Richard Anderson, senior adviser to the U.S. Conference of Mayors’ water council, said cities need to consider partnerships because the costs for infrastructure improvements are so high that some cities would go bankrupt trying to pay them.

“We allow water to be operated as a monopoly by local governments,” Anderson said. “People go to rate meetings and the nun gets up and says: ‘Rain is free. Why are we paying so much?’ Well, go out and catch it. You’re not in Ethiopia! You’re not going to take a bucket down to the river and get dirty water. It’s very hard for the public to understand why you have to pay so much for clean water.”

In Woodbury, City Councilor William Fleming tried to reassure the 25 or so citizens at the meeting that selling Woodbury’s water system isn’t a done deal. There will be public hearings for citizen input, he said, and months of discussion and study.

“Up until the very last minute we can always say no,” Fleming said.