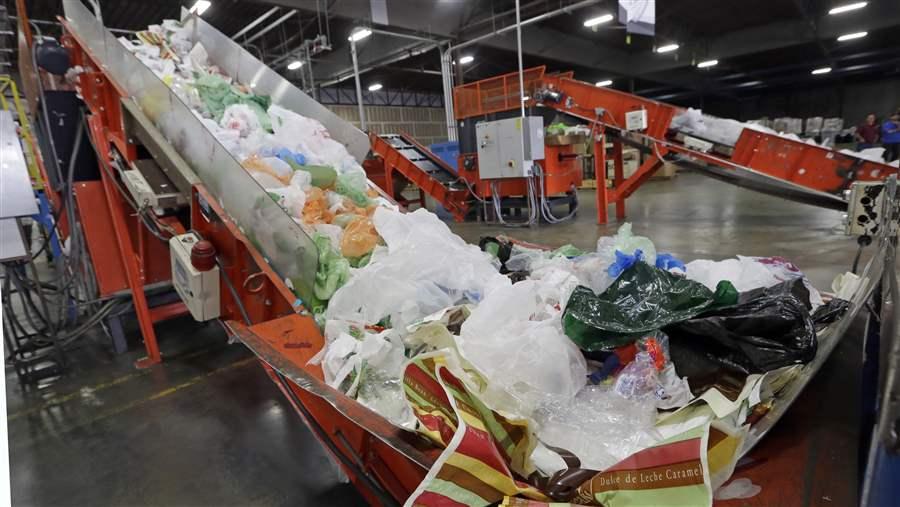 A plastic recycling plant in Vernon, California. Many states and localities are trying to make recycling viable again after a decline in global commodity prices.

This story has been updated to clarify the reason behind the closing of the Montgomery recycling plant.

With great fanfare and promises of a new era of recycling in Alabama’s capital, officials from Montgomery and from a Florida company called Infinitus opened a state-of-the-art mixed waste and material recovery plant in April 2014.

The plant created over a hundred jobs and allowed Montgomery residents to put their garbage and recyclable material in one curbside bin for pickup. The plant’s sophisticated assembly line of shakers, sensors, sorters, belts and hoses would separate recyclable material from garbage, and clean paper, plastics, metals and glass that could be reused.

Infinitus also collected recyclables from around the region, including the western panhandle of Florida. Its revenue largely came from selling that reusable material, which was mostly destined for China.

The money was so good initially, said Montgomery’s sanitation chief, Daniel Dickey, that “we had a profit-sharing agreement with them.”

But in October 2015, the plant was suddenly shuttered, and Montgomery began dumping its curbside pickups in a landfill. The plant was operating at a loss, a victim of rock-bottom global commodity prices.

The closing of a plant that many civic officials thought pointed to the future of recycling is an extreme example of the disruption that has been roiling recycling programs and industries in the past year.

But it helps illustrate how the long, drastic slide in the price fetched by recyclable commodities is hurting recycling programs and companies — and laying bare some serious structural problems in how the nation collects, processes and sells recyclable material.

“Good times make us happy, and sometimes when we’re happy we don’t think down the road. That’s human nature,” said Chaz Miller, policy director of the National Waste & Recycling Association, the trade association that represents private-sector waste and recycling companies. “But now we’re down the road, and not sure what’s ahead.”

Failure to address these problems adequately could jeopardize the recycling goals that most states have set for themselves as a major part of their environmental strategies.

For years, recycling programs seemed like magic. Municipalities, counties and state-run programs were not only improving the environment, but spending little to do so and in many cases saving money by not having to pay landfill fees or making money by selling the material to processors who wanted it.

Recycling haulers and processors offered low- or no-cost contracts to municipalities and other customers because they wanted to sell the recycled material at what were high — even record high — prices during what Joe Pickard, director of commodities at the Institute of Scrap Recycling Industries (ISRI), called “the super cycle in commodities.”

Prices during the cycle, from the late 1990s until the financial crisis that began in 2008, skyrocketed for nearly all raw materials. And many recyclables hit record peaks in 2008: ISRI’s weighted index of scrap metals and paper hit a high of $380.25 a ton in April of that year. Plastics experienced similar highs. Although prices plunged later that year, they rebounded quickly and nearly reached record highs again in early 2011.

Much of the price rise was spurred by China’s extraordinary economic growth and its seemingly boundless appetite for any kind of raw material.

Prices began a long, gradual slide in 2011 and then dropped sharply over the course of 2015, when the ISRI index of paper and metals fell nearly $100 a ton to $156.77. Commodity prices had collapsed by nearly half from the record highs.

Plastics, which ISRI does not include in the index, were hit especially hard because they are made largely from oil — and oil prices have dropped so low that it costs the same or less to make virgin plastic than to use recycled plastic.

Michelle Leonard, president of an association that represents public and private recyclers and haulers, the Solid Waste Association of North America, said “markets are so low right now that some processors are holding on to” recyclables rather than selling — especially those far from the West Coast ports that ship to China.

As prices slumped and contracts that processors and haulers had with local governments expired (or hit certain targets that allowed for renegotiating rates), taxpayers suddenly found themselves paying much more dearly for a service that had been low-cost or even a source of revenue.

In some cases, companies had trouble paying what they had promised for the recyclables they picked up and processed. Firstar Fiber, for instance, fell behind in its payments to Omaha, Nebraska, by hundreds of thousands of dollars. “There has been real sticker shock,” said Miller of the recycling industry group.

The problem was so jolting to municipalities and counties that the two recycling associations (which together represent companies serving most curbside recycling programs in the country) drew up and issued guidelines for new contracts aimed at sharing costs and risks more evenly between localities and the haulers and processors.

It’s unclear whether states, most of which have some type of recycling goal, are seeing a dip in recycling efforts as the commodity crisis drives up the costs of collecting and processing.

“Nobody has really been talking to us about any problems,” said Karen Moore, the recycling administrator at Florida’s Department of Environmental Protection.

“It’s far too early to tell,” said Mark Oldfield, the spokesman for CalRecycle, the state agency in charge of recycling in California.

But that doesn’t mean states aren’t aware of the problem or thinking about whether and how to address it.

CalRecycle ran a workshop in February, entitled Recyclable Commodity Prices: Trends and Impacts, at which local officials and recycling industry representatives gathered to size up the problems.

California, which is recycling 50 percent of its waste and wants to reach 75 percent by 2020, is also trying to find ways to create more domestic demand for recycled commodities so “we insulate ourselves from the ups and downs of the markets,” Oldfield said.

“We’re good at collecting stuff,” he said. “We need to get good at using these materials here and creating a market for them.”

He points to California’s efforts through Recycling Market Development Zones to spur the creation of infrastructure that makes it easier for manufacturers to make new or existing products using recycled materials. The zones give manufacturers and entrepreneurs access to low-cost loans, technical advice, free marketing and more.

The state points to a number of companies that benefited from the program and are using or recycling materials that otherwise would have gone to landfills. American Textile & Supply Inc., for example, uses recycled fabrics in a variety of products, such as cleaning and absorbing rags. California says the company diverts an additional 1,000 tons of textiles from landfills a year thanks to the program. And Princess Paper Inc. says it uses program loans to make towel and tissue products from 5,000 tons of recycled paper each year.

Florida, which also has a recycling goal of 75 percent by 2020 and is at 50 percent now, has a less activist approach than California and generally leaves much of the responsibility for meeting those goals to cities and counties. However, counties that don’t meet the goals get a gentle push, Moore said.

Counties that didn’t reach the interim goal of 50 percent are required to submit plans explaining how they will step up their efforts. Escambia County — one of the Florida panhandle counties left in a lurch by the sudden closing of the facility in Montgomery — is building a new recycling facility and will be able to resume recycling materials residents leave in recycling bins rather than burying them in landfills.

Debating the Direction of Recycling

It’s a maxim of the recycling industry that making it easier for people to recycle increases volume. That’s why a growing number of programs have turned to single-bin systems, in which consumers put all recyclables into one container, instead of having to sort paper, cans, glass and plastics into two or three containers to be picked up. Garbage has its own can and goes straight to a landfill.

But this so-called single streaming system requires more equipment and man power to separate and clean recyclable material than handling recyclables that are already sorted by customers.

But if convenience is the goal, what could be easier than comingling all recyclables and garbage?

“None of my members can buy [that paper] because a lot of what we make are food-grade materials,” Fran McPoland of the Paper Recycling Coalition told the Montgomery Advertiser newspaper in November. “The objective is to take material contaminated with garbage and then magically separate it out so you have some valuable recyclable material. However, some things can’t be separated.”

Montgomery appears to have given up on the comingled approach. The city expects to eventually take over the facility and is likely to use it only to separate different types of recyclables from one another.

Indianapolis just scrapped plans to build a similar facility, which had been ardently opposed by recycling advocates there even before the Alabama plant closed. Critics had serious doubts about the plant’s ability to recover an acceptable, uncontaminated amount of recyclables. The failure of the Montgomery facility appears to have been the last nail in the coffin.

Most communities that already collect recyclables from a single bin are unlikely to change any time soon. That’s because customers are used to the system and the convenience, and the infrastructure for handling it already is in place, most analysts say.

“I think that horse is out of the barn,” Miller says. He is among those who suggest that contamination issues would best be resolved by educating residents.

A nonprofit called the Recycling Partnership exists to help boost recycling rates by teaching residents what should and should not go into their bins. The foundation and Massachusetts announced in January that they would test different approaches across the state with an eye toward creating a “field-tested, data-supported program” to help drive down contamination rates.

But others argue that communities new to recycling should avoid single-bin systems. Florida’s environmental agency has gone so far as to send a memo to counties spelling out how the single-bin approach can lead to contamination and machine breakdowns.

Given that recycling of materials such as bottles, cans and glass has taken hold in much of the country, most recycling advocates and analysts argue that the next big step toward ambitious goals will be to find ways to collect and use food and other organic waste.

California is trying to encourage efforts to divert organic waste from landfills with a $100 million grant program to help spur the collection of compostable material and plants for processing it.

To succeed, “We have to manage this material,” said California’s Oldfield. “The largest amount of stuff that goes to landfills is compostable green waste and food waste.”