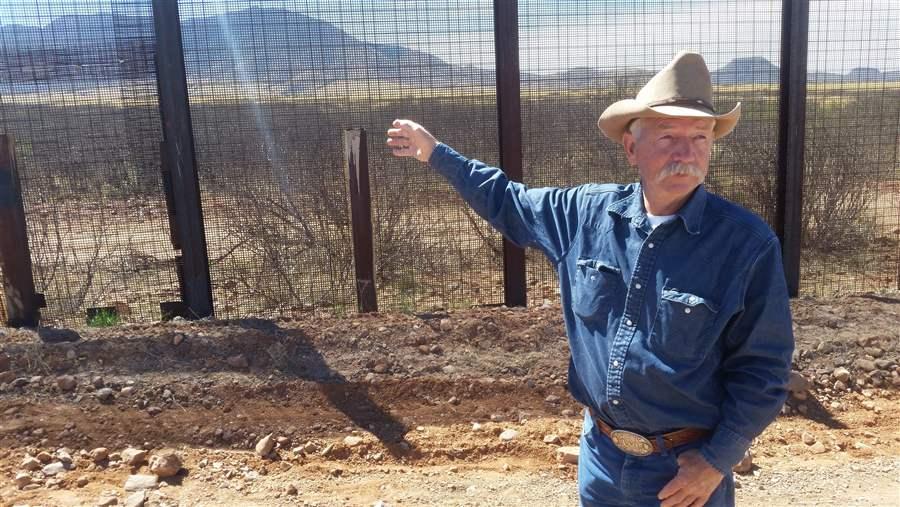 John Ladd stands along the road that separates his cattle ranch from the U.S.-Mexico border in Naco, Arizona. While the flow of illegal immigrants across the Southwest border has largely subsided, states are facing other security challenges.

NACO, Arizona — John Ladd used to watch as groups of a dozen or more migrants trekked each day across his ranch, which sits along a fence that separates Mexico from Southeast Arizona.

But the heavy foot traffic that once crossed the desert here and along much of the Southwest border has subsided. Illegal immigration from Mexico declined dramatically during the recession, and apprehensions along the border are now less than a third of what they were 10 years ago.

Across Ladd’s land these days, it’s mostly dust and cattle. But that doesn’t mean the border is secure. Mexican criminal cartels have increased their presence, watching over the land for lapses in border enforcement and then smuggling people and drugs across. And, in Texas, more Central American immigrants are attempting to cross illegally into the U.S., as violence escalates in their home countries.

So while presidential candidates call for bigger walls or an easier path to citizenship, many officials here say they are less worried about stopping vast numbers of people, and more concerned with battling the cartels and stopping the flow of drugs.

In Texas, Republican Gov. Greg Abbott in December extended the stay of National Guard troops along the border to help stem the flow of illegal Central American immigrants, some of whom were unaccompanied children. And he and the Legislature doubled spending on border security initiatives to $800 million over two years. In addition to addressing the flow of people, the plan is meant to help root out the cartels’ hidden activity. More state troopers and deputies are stationed on main smuggling routes and more money is going to technology, such as cameras and scopes, to help monitor more difficult terrain from afar.

In Arizona, where smuggling of methamphetamine and heroin is increasing dramatically, Republican Gov. Doug Ducey is proposing to spend $31.5 million more next year to expand a new program designed to stop cartel activity.

“If it doesn’t look like the chaos everyone says, that’s because it’s in the shadows,” said Thad Smith, the chief sheriff’s deputy of Cochise County here, about 100 miles southeast of Tucson.

The plans have drawn criticism from many sides. Some Democratic lawmakers say securing the border is the federal government’s job, and states shouldn’t be spending money on it, especially when immigration numbers are down and federal funding is at an all-time high, reaching $13.2 billion this year.

And researchers who study the U.S.-Mexico border, such as Tony Payan, director of the Mexico Center at Rice University’s Baker Institute for Public Policy, say there are better ways to battle the cartels, such as decreasing demand for drugs in the states. “Trying to plug the border of drugs is not going to work,” Payan said.

A Shift to the East

After illegal immigration from Mexico became rampant in the 1990s, initial enforcement efforts focused on the West. A federal program boosted border security in California, and Congress appropriated funding for 700 miles of fencing along the 1,954-mile border. Most of the miles that have been built so far have been in California and Arizona. In 2010, then-Gov. Jan Brewer, a Republican, spent $10 million in federal stimulus money to beef up border security.

After those efforts helped make the border more secure, immigration shifted east — evidence of what is sometimes called the “balloon effect.” Total border control apprehensions have decreased in Arizona by about 45 percent since 2011, to 70,074 in 2015, and increased in Texas by about 44 percent to 210,468.

Changing demographics also have contributed to the shift. Apprehensions along the border of people from places other than Mexico have tripled, and, Texas provides a more direct route into the U.S. for migrants from Central America. (New Mexico’s mountainous and desolate terrain offers a less hospitable route.)

Texas’ additional spending — for 250 more troopers, a $7.5 million aircraft, installation and maintenance of border cameras, and a new intelligence center to analyze crime data — comes at a time when the federal government proposes reducing the number of aerial surveillance hours along the border by half. That’s a move Abbott last month called “imprudent” in a letter in which he urged the U.S. Department of Homeland Security to reconsider the cuts.

Not everyone in the Lone Star state agree with the state’s spending, though.

Payan said the illegal immigrants coming across southeast Texas in waves aren’t hiding from border control, as many of the children are turning themselves in.

Others argue that militarizing the border only leads to more violence. Democratic state Sen. José Rodríguez, who represents El Paso and surrounding areas, said that rather than spending millions on state troopers to act as state border patrol, the state should focus on making the border friendlier to residents and trading partners.

“Gunboats and helicopters are great visuals,” Rodriguez said, “but using them as a political prop sets a tone from the top that the state sees the border as a threat, not an opportunity.”

Along the edge of Ladd’s property in Arizona, dust kicks up on the other side of the border fence as a red truck with two men inside drives by, stopping at the top of a hill. They’re scouts, Smith said, working for cartels that are always watching, from the tops of hills, mountains and houses, to find gaps in patrol areas.

While cartels mainly smuggled marijuana before, the amount of heroin apprehended along the border more than doubled from 2009 to 2014, and the amount of meth more than quadrupled.

And while families used to cross the border in plain sight, they often hire cartels now, to stay hidden. Smith and other officials in border towns say that because of this, they know that more people are getting across than the border patrol knows about.

Gov. Ducey’s proposal would expand a “border strike task force” to patrol main smuggling routes. In its first four months, the new force made over 300 arrests and seized 4,400 pounds of marijuana, 194 pounds of meth, and 21 pounds of heroin. In comparison, in the entire previous year, state troopers seized 14 pounds of heroin.

The plan arrives at a time when the number of federal agents patrolling the Arizona border has been declining. The same is true across the Southwest border, where the number of agents peaked at 18,611 in 2013. Last year, there were 17,522.

Cochise County Sheriff Mark Dannels said state and local government has had to step in because the federal government “forgot about” border communities.

Working with federal and state agencies, Dannels created a special unit in 2013 that patrols remote and mountainous regions looking for border-related crimes such as drug smuggling and violence. The team consists of border patrol agents, sheriff deputies and state troopers.

Worried about the border, the Arizona Legislature in 2011 started raising money to be used to expand the state’s border fencing. That effort failed, but lawmakers last year awarded Dannels $219,000 it had collected from private donors, to be used to help the county track down illegal immigrants and smugglers. Most of the money will be spent on a $156,000 thermal binocular, which can be used to detect body heat in the distance. The rest will pay for six handheld thermal cameras, binoculars, handheld GPS and a scope.

Here in Cochise County, the cartel sends drugs on the backs of men, known as “drug mules,” who travel up rugged mountains and through tunnels to cross the border. They also shoot the drugs over the fence using air cannons and catapults, fly the drugs across in ultralight planes, and cut holes in the border fence big enough for a truck to drive through, and then drive loads through, Smith said.

In the last three years, Ladd said he’s seen tire tracks along the 10 miles he owns along the border, and holes in the steel border fence, and reckons that cartels have driven their trucks through about 50 times.

Living in a War Zone

Earlier this month, about 600 ranchers gathered at the high school in Animas, New Mexico, to talk about their worries and try to get the attention of local, state and federal lawmakers. Tricia Elbrock, who owns a ranch in Animas, said increased drug smuggling is causing the community to live in fear, and hurting her business and others.

She and other ranchers want border patrol agents to stay along the border, not miles away, and they want more “hoofs on the ground” — agents on horseback. Elbrock said she doesn’t want to leave her community, but if the problem continues, she may have to.

“This is our home, and we’re not going to get up and let the drug cartels take over,” Elbrock said. “We have a problem here and it’s not just ours, it’s everybody’s.”