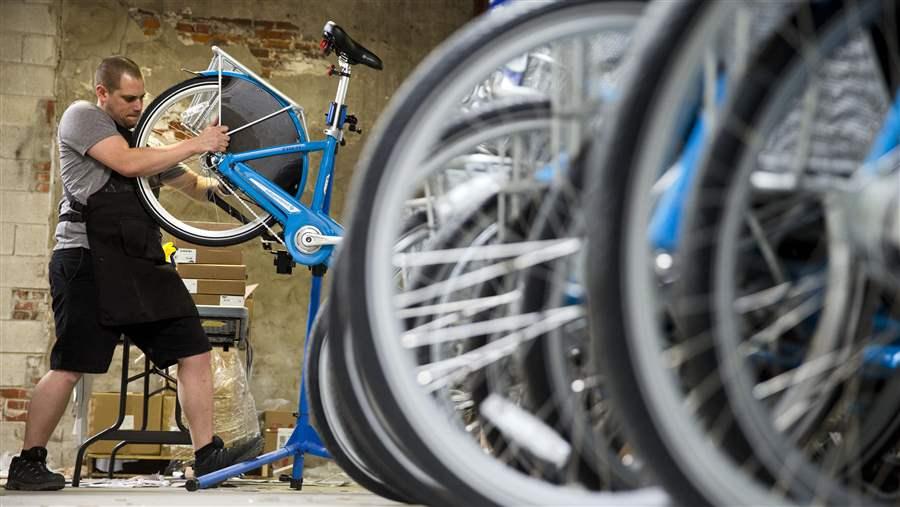 This story has been updated to correct the outside funding for Birmingham, Alabama’s program.

The first modern U.S. bike share programs rolled out in Denver, Washington, D.C., and the Twin Cities about five years ago as a way to ease congestion, cut pollution and give residents and tourists a fun and healthy way to get around.

With their sturdy bikes and docking stations, the systems have spread quickly since then: More than 32,000 bikes are now in use in sharing programs in about 80 U.S. cities, including smaller cities such as Birmingham, Alabama, and Fargo, North Dakota. Another 100 cities are studying, planning or constructing their own bike share programs, including Baltimore, where a system is set to open in October.

Bike share advocates and analysts say successful programs balance a desire to reach into new parts of cities with the need to supply enough bikes and stations in dense downtown areas to make service convenient and reliable. Successful programs also attract both regular riders and occasional users, who often contribute more to a program’s bottom line. Even then, most programs also depend on outside funding to keep the bikes rolling.

“You are not always going to make money or even break even,” said Tim Blumenthal, president of People For Bikes, a bicycle industry and advocacy group. “These are public transportation systems that cost money.”

Starting a bike share program requires substantial capital, typically about $4,000 to $5,000 per bike, which also covers the cost of docking stations and kiosks, said Russell Meddin, the founder of Bike Share Philadelphia.

But while programs need to roll out with enough bikes and stations to make travel convenient, bigger isn’t always better.

Bike share programs in Chicago, the District of Columbia and Minneapolis, which count on residents and tourists to use their systems, have been successful because they have many stations within dense areas.

“These systems work best when people can find an open dock and can find an available bike,” Meddin said. “Once you have a dense array of stations, ridership increases and then you can expand the geography.”

There is some evidence that bike share programs have an impact on pollution, albeit a small one. Neighborhoods with bike share stations in Washington, D.C., had 2 to 3 percent less traffic congestion than areas without them, according to Timothy Hamilton, assistant professor of economics at the University of Richmond, who looked at traffic between 2010 and 2012.

Cities that don’t have the tourism or dense downtowns of larger cities can still be home to successful programs.

In Fargo, with a population of about 110,000, the bike share program that opened last year has just 100 bikes, used mostly by students at North Dakota State University. Student activity fees help pay for the bike share system. Once students register for the program, they can grab a bike for free to travel between the main campus and the downtown campus, where parking is difficult.

Despite the small size of the Fargo program, which “hibernates” during winter, it reached a milestone in the bike sharing world, with bikes used for an average of 20 trips a day, said Sara Watson Curry, director of operations for the nonprofit that runs the bike share.

Birmingham, Alabama, has tried to make its system more appealing by using bikes with electric assist pedaling, more commonly called pedelec, which does about 80 percent of the work of moving a bike.

Lindsey West, director of the city’s Zyp bike share program, credits pedelec with making the program popular in a warm climate with many hills, and says that in a city with a high obesity rate, it helps encourage those who may otherwise be hesitant to get on a bike.

“It’s hot, and we still want to go to meetings and to lunch and look professional. We want to change the bike culture but have people still feel they look presentable,” West said.

Most bike share programs are managed by city agencies or nonprofit groups, and even those with plenty of riders have struggled to be financially sound.

In Chicago for example, members who pay $10 a month account for two-thirds of rides, while casual users —who pay $10 for a 24-hour pass — account for two-thirds of the revenue brought in by riders, according to Sean Wiedel, who manages the program for the city and is vice president of the North American Bike Share Association. But the revenue from riders only covers about 85 percent of the costs of the program — and that’s one of the highest rates in the nation, he said.

In Washington D.C., where the bike share program started in 2010 and now has more than 3,000 bikes, riders cover 77 percent of the $7.2 million operating costs. In Boulder, money from riders covers just 35 percent of the system costs.

To close the gap, programs have turned to federal grants and corporate sponsorships.

In New York, Citigroup, the financial services firm, pledged $41 million to underwrite the city’s bike sharing program for five years. San Antonio’s nonprofit bike share program has relied on about $180,000 from the city to keep it afloat.

Birmingham, Alabama, received $1.6 million in federal transportation grants as well as $2.2 million from Regions Bank, Blue Cross Blue Shield of Alabama, Alabama Power Foundation and others to get its program started in October and keep it running for the next five years.

In Seattle, the city council voted this month to spend $1.4 million to buy the city’s troubled program from the nonprofit group that launched it.

The Seattle system operated in a dense urban area, with a mix of regular riders and tourists. But it also had to deal with the challenge of a city law that requires bike riders to wear helmets, ultimately providing clean helmets and bins for dirty ones.

The program was plagued by $1.2 million in debt. City Councilman Mike O’Brien, who supported the city’s takeover, said the program did not expand quickly enough, and its problems were compounded when the city’s transportation department hired its own bike share experts, creating confusion over who would run the program.

In Minneapolis and St. Paul, old rail lines have been converted to bike trails. But ridership is much higher in Minneapolis, where the trail runs through downtown, said Dossett of the Twin Cities’ program.

Millennials were at the heart of the bike share movement, and today most riders are young, white men, said Wiedel of the North American Bike Share Association. But many cities are trying to increase membership by attracting new riders who better reflect the racial, gender and age profile of their cities.

Philadelphia’s kiosks, like many across the country, only take credit and debit cards. But the city’s bike share program allows people to sign up online and pay for a monthly membership in cash at some convenience stores, where they receive an electronic key to unlock bikes.

Chicago’s system offers $5 memberships to those who qualify as low income. Wiedel said 70 percent of those with regular memberships are men, but men and women have signed up for the reduced cost memberships in equal numbers.

James Decker, coordinator of Baltimore’s program, said it will offer pedelec bikes to make the system more appealing to those who aren’t used to biking, and will place stations in neighborhoods across the city, including low-income ones.

“We want a bike share program that’s an accurate reflection of the people of this city,” he said. “We want to make sure this large public investment is convenient and accessible for everyone.”