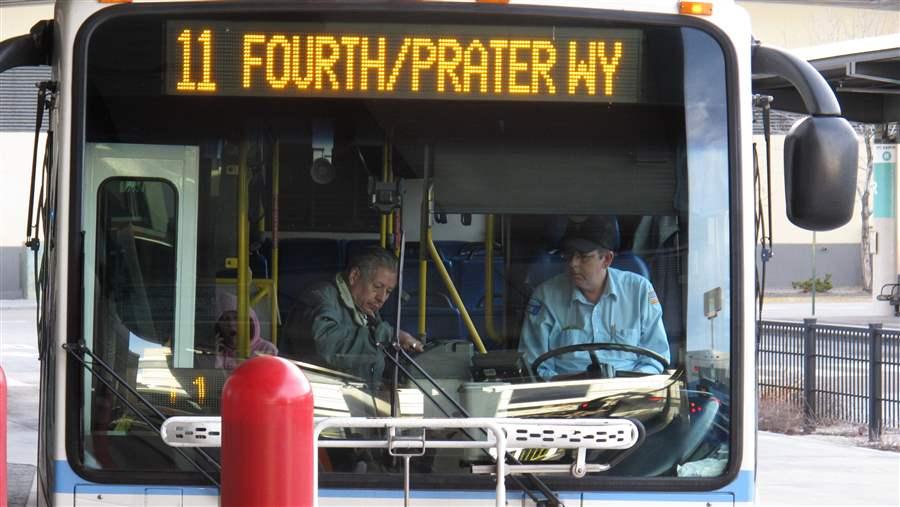 A passenger boards a bus in Reno, Nevada, where drivers are battling county government over audio surveillance on public buses.

When passengers board a public bus in Maryland, chances are they’re not only on camera, but their conversations are being recorded as well.

Probably unbeknownst to many riders, the Maryland Transit Administration (MTA) has been recording sound, as well as video, on 487 of its 771 buses, starting in 2013, in the name of safety and customer service. So are cities like Atlanta and San Francisco. In fact, the ability to record sight and sound comes standard on most new bus fleets being bought by city and state transit agencies.

The recording is justified by transit and law enforcement officials, such as MTA Police Force Capt. Christopher Holland, as an investigative tool to help prosecute crimes and by manufacturers of the equipment, such as Apollo Video Technology Chief Operating Officer April Johnson, as a way to check the quality of driver and customer service. And, they insist, the listening devices aren’t overly intrusive or in violation of riders’ privacy.

“It’s a public setting on a public conveyance,” Holland said. “On that same bus, anybody could be pulling out a cellphone and recording what you’re doing.”

But privacy advocates and civil libertarians, such as Jay Stanley of the American Civil Liberties Union, say the ability of government to listen in on conversations is more intrusive than simply being captured on video in a bank or store. And, they say, it represents another step in spying on citizens who already are being recorded by police-worn body cameras, and whose cellphones can be tracked and auto license plates scanned and searched.

And in Maryland at least, the voice taping is likely running afoul of state law that requires consent to record a conversation, said state Sen. Jim Brochin, who wants to halt the rolling voice recording.

“If you and I go sit on a bus, it’s nobody’s business what our conversation is,” he said.

Brochin, a Democrat, is pushing legislation that would make bus drivers responsible for turning on audio recorders when events on the bus warrant it. The bill is a compromise, he said, because getting his colleagues to end audio recording altogether is unlikely.

Microphones On or Off?

It’s unknown how many public buses across the country are equipped with audio recorders, which Apollo’s Johnson said are being installed on nearly every new one being made. Nor is it clear how many states and localities are using them.

In Connecticut, for instance, they aren’t, said state Transportation Department spokesman Kevin Nursick. The microphones aren’t turned on, he said, because the risk of violating riders’ privacy outweighs the benefit of collecting audio.

Soundless videos adequately show what happens on public buses, he said. Audio recording would make riders less trusting of government and does not sit well with the public, he said. “Period.”

And in Nevada, bus drivers are in a standoff with the Washoe County Regional Transportation Commission (RTC) in Reno, which wanted to turn on microphones two years ago.

Gary Watson, president of the local Teamsters union that represents the drivers, said the RTC doesn’t have the authority to start recording audio without approval from the union, and his members are concerned the recordings could lead to disciplinary action for drivers.

“It’s a term and condition of employment, which could lead to discipline,” Watson said. “And that’s got to be negotiated through a contract.”

Much of the argument over the listening devices pits their effectiveness as a crime-fighting tool against what critics say is a Big Brother-style government intrusion.

In Maryland, Holland of the transit police said audio recordings have been essential in prosecuting about a half-dozen criminal cases in the last three years.

For example, he said, police used the audio and video recording of an assault on a bus to identify an assailant by his street name. They were then able to run the name through a law enforcement database and pinpoint exactly who to arrest. Without audio, he said, police wouldn’t have been able to solve the case.

“You’re looking at an anonymous person,” Holland said. “You have no idea who you’re looking at, and unless you stumble on them on the street, you’re never going to get them.”

Combined with improved police training, the recordings keep crime down, Holland said. The number of violent crimes committed on Maryland transit decreased by 11 percent between 2014 and 2015.

In Montgomery County, Maryland, a Washington, D.C., suburb of about a million people, audio recordings on 340 buses hold drivers accountable and help officials settle disputes between drivers and passengers, said Jeff George, who manages safety, training and security on the county’s transit services.

“It’s kind of like watching a silent movie,” George said. “Until you listen to the audio, it’s really difficult to tell what’s taking place.”

But Jeramie Scott of the Electronic Privacy Information Center said mass surveillance is bad public policy and, although cameras and audio recordings may be helpful for public safety, they could easily be used for tracking individuals or capturing entire private conversations.

“We don’t have a criminal problem or a terrorism problem because we have a lack of mass surveillance,” Scott said. “Mass surveillance will never solve those problems.”

Under one privacy safeguard adopted by the MTA, Holland said voice recordings are taped over with new ones every 30 days — and not kept and stored by the agency.

But that’s not enough security against possible abuse of government surveillance in the minds of some privacy advocates.

“Do you really trust the government to say they’re going to listen and then roll it over in a week, 30 days, or whatever?” Brochin said.