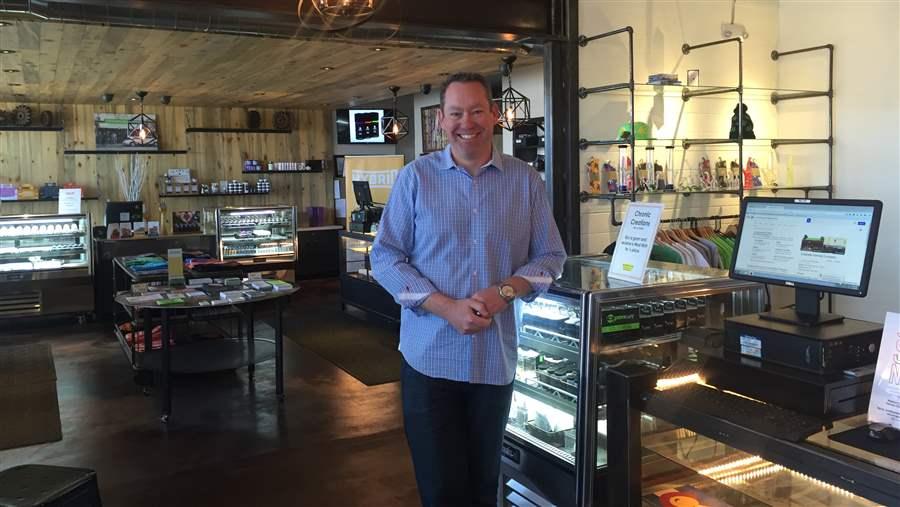 Tim Cullen, founder of Colorado Harvest Company, has had trouble keeping a bank account for his marijuana business.

DENVER — Tim Cullen’s marijuana business brought in millions of dollars last year, but he’s had a hard time finding a bank to take the money. He’s cycled through 14 checking accounts in six years. Recently, he said, a bank shut down all his personal accounts, including college savings for his 3-year-old son.

Federal law prohibits banks and credit unions from taking marijuana money. So here in Colorado, everyone involved with the state’s legal cannabis industry has a banking problem. Businesses can’t get loans, customers have to pay in cash, and state tax collectors are processing bags of bills.

Some community financial institutions have become more open to serving the cannabis industry since the U.S. Treasury and Justice departments said they won’t go after institutions that keep a close eye on their clients and report suspected wrongdoing, such as funding gang activity.

But the big banks refuse to touch the industry, and banking challenges are only going to grow as legal marijuana expands. Nationwide, sales hit $5.4 billion in 2015, according to The ArcView Group, an analysis and investment firm that specializes in the legal cannabis industry.

Twenty-three states allow medical use of marijuana and four also allow recreational use. Voters in Arizona, California, Massachusetts and Nevada may legalize adult use this fall, and Vermont’s Senate recently approved a bill that would do so.

States are looking to Colorado — which legalized medical marijuana in 2000, and adult use in 2012 — for answers to the banking problem, but the state has few to offer. “We don’t truly think we’ll see a solution unless there’s a federal solution,” said Andrew Freedman, Colorado’s director of marijuana coordination, who’s also known as the state’s pot czar.

Cullen has been an unofficial spokesman for Colorado’s cannabis industry ever since he bumped into a CNN camera crew while picking up one of the state’s first retail marijuana licenses, he said. It helps that he’s a clean-cut former high school biology teacher who designed his stores with his mom in mind.

“We wanted to look like Restoration Hardware,” he said while walking through the main Denver location of Colorado Harvest Company, the marijuana growing and retail business he founded in 2009 and co-owns. That means wood paneling, edibles laid out in glass cases like chocolates, and a scent in the air that’s more reminiscent of a day spa than a college dorm.

But even Cullen’s squeaky-clean operation makes banks uneasy. The company’s current account, with a credit union, only covers basic services such as direct deposit for the company’s 70-odd employees and sending tax payments to the state, Cullen said.

An ATM sits in the corner of each of his three stores, because his business can’t process credit or debit card payments (credit card companies, like banks, may refuse to touch marijuana money). Every day an armored car swings by to pick up the day’s revenue — all cash — and takes it away to be deposited.

About 40 percent of Colorado cannabis businesses lack bank accounts altogether, according to the office of U.S. Rep. Ed Perlmutter, a Democrat who has pushed to improve banking for the cannabis industry. State officials would not comment on that number.

Freedman said a growing number of marijuana businesses seem to be obtaining bank accounts, judging by the declining share of tax revenue that businesses are paying in cash. But the services they’re able to access are limited and costly — “which means a lot of people prefer to keep as much as they can in cash,” he said.

All the cash floating around makes cannabis businesses targets for crime, Freedman says. Since Colorado fully legalized marijuana in January 2014, the Denver Police Department has logged over 200 burglaries at marijuana businesses, as well as shoplifting and other crimes.

The loose cash also makes it harder for the state to track businesses’ finances to make sure they are obeying the law and paying their taxes. And in order to get a bank account, some businesses will funnel their cash through a shell company, Cullen said. “It starts to look a lot like money laundering.”

As Cullen’s experience shows, accounts can also be tenuous. Sometimes, a financial institution will change its mind about taking marijuana money. Or it might learn of a client’s ties to the marijuana industry. Mark Goldfogel, a consultant, said his bank closed accounts he’d held for 14 years after he revealed who his marijuana clients were.

Not Much States Can Do

Colorado’s attempts to solve the problem have shown other states how few options they have.

In May 2014, lawmakers authorized a new class of financial institution called a cannabis credit co-operative, which wouldn’t have to acquire and maintain deposit insurance. But no such institutions have been formed so far, partly because the Federal Reserve isn’t likely to approve them.

Later that year, lawmakers authorized a credit union for the cannabis industry. But the Fed denied the credit union access to a master account, which is necessary for transferring money, and the National Credit Union Administration refused to insure its deposits.

“Even transporting or transmitting funds known to have been derived from the distribution of marijuana is illegal,” the Federal Reserve Bank of Kansas City said during a court case the credit union brought and recently lost.

Without a master account, the credit union can’t fully function, said Mike Elliott, head of the Marijuana Industry Group, a trade association in Colorado. “It can be a vault. But we don’t need a vault,” he said.

Officials in other states that allow marijuana have run up against the same barriers. Tax officials in California have floated the idea of a state-run bank, for instance, as have officials in Alaska. But such an institution would still have to use federal wiring services, said George Runner of the California State Board of Equalization.

California already has trouble collecting taxes on medical marijuana, Runner said. “We’ve had folks come in with hundreds of thousands of dollars” in cash to make a payment. Other than increasing security at tax collection offices, there’s not much his office can do about it.

The cannabis industry’s banking problems would vanish if Congress were to take marijuana off the federal government’s list of most dangerous drugs. Last November, U.S. Sen. Bernie Sanders of Vermont, who is running for the Democratic presidential nomination, became the latest lawmaker to propose the change.

But that’s a remote possibility. Perlmutter has introduced a bill — twice — that would take a smaller step, and stop federal regulators from penalizing financial institutions for serving the cannabis industry. He hasn’t been able to get a hearing, let alone move the bill out of committee.

Perlmutter and his allies in Congress are now trying to cut off funding for federal enforcement actions against banks and credit unions that serve cannabis businesses.

The Fed and other regulatory agencies have made it clear that states can’t create new financial institutions for the cannabis industry. But because the Obama administration has indicated that it will look the other way when existing institutions serve cannabis clients, businesses like Cullen’s do have some options.

Vermont’s Department of Financial Regulation has researched the services available to the state’s four medical marijuana dispensaries and found some good news. The state’s largest credit union serves one dispensary and says it would serve more. Although the credit union doesn’t offer marijuana businesses much more than depository accounts, federal regulators confirmed the accounts are insured.

Vermont state Sen. Joe Benning, a Republican who co-sponsored the Senate proposal to legalize marijuana for adult use, said the state’s financial institutions should be able to handle the cannabis industry’s expansion — at least initially. “You’re not going to have to be bringing in wheelbarrows full of cash to make deposits,” he said.

In other states, new services have emerged to eliminate cash transactions. In Washington and Oregon, an intermediary company called PayQwick electronically transfers money between marijuana growers, sellers, customers and their financial institutions. PayQwick also files all the paperwork the Treasury Department requires, taking a burden off banks.

Tax collection offices are doing what they can to manage cash collections. Offices in Oregon and Colorado have invested in extra security, such as safety glass and security cameras; businesses are also hiring security guards to help them make their deposits safely.

Auditing cash-only cannabis businesses is tough, but not impossible. In Colorado, the Department of Revenue relies on the state’s system for tracking legally grown and sold marijuana plants, Freedman said.

Still, the situation is far from ideal for businesses or for states. It’s temporary, too; nobody knows how the next president will enforce federal marijuana policies.

While Colorado waits for Congress to act, state officials will keep meeting with bank and credit union boards and explaining the nuances of federal law, Freedman said. That slow, institution-by-institution campaign may be states’ best hope for getting marijuana money off the streets.

“I think it’s going to get better. It certainly couldn’t be worse,” Cullen said of the cannabis industry’s banking problem. He takes the sunny view that as more states legalize the drug, it will become something federal lawmakers will no longer be able to ignore.