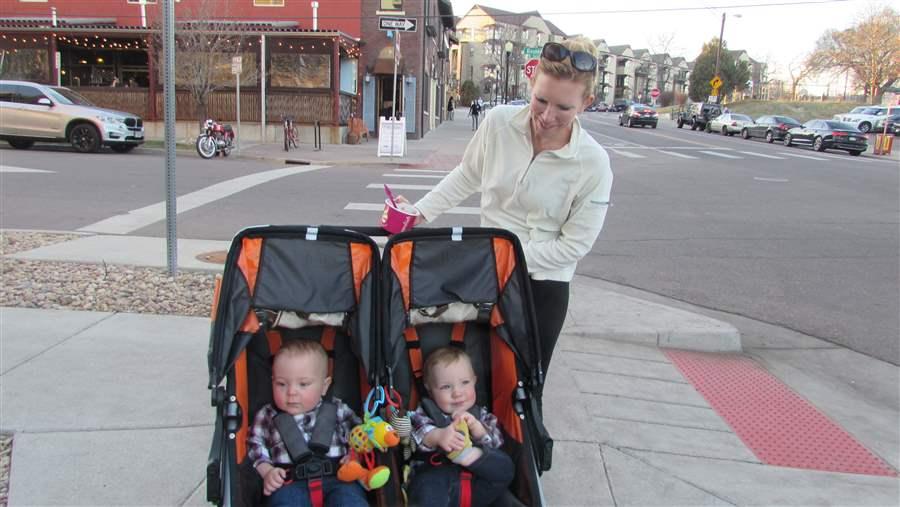 Sarah Lenti moved to Denver’s LoHi neighborhood, where apartments are replacing houses, before her twin boys, Abel and Eli, were born. She’s inclined to stay there rather than move to the suburbs as some millennials will.

DENVER — Jason and Rebecca Petersen’s lives are in flux, just as they are for many young families. They like life as renters in the urban neighborhood here called LoHi, where apartments are steadily replacing single-family houses, and crowds of millennials flock to trendy shops and restaurants.

But will they buy a house in the suburbs as their son, 3-year-old Lucas, nears school age? It’s a possibility, if jobs lead them there, or they go in search of better schools. But they would miss the lively neighborhood and its short walk downtown, through a scenic park where Lucas loves to ride his bicycle.

The Petersens, like other millennials — who were born after 1980, have a taste for city life, and are willing to move in search of work — have helped fuel a boom in apartment construction unlike anything in recent decades. They tend to have careers that were delayed by the recession, and to lack the job security or savings to settle down and buy a home.

Construction started on 386,000 new apartments last year, according to census data, the highest number since 1987. Apartments, defined as housing units in buildings with five or more units, made up 35 percent of all home construction last year, the highest share since 1973.

Forty-seven states saw construction shift from houses toward apartments, as measured by approval of permits, between 2005 and 2014, the most recent complete year of census data. The shift was especially dramatic in western states such as Colorado, where multifamily units made up 38 percent of new construction permits in 2014, up from just 10 percent in 2005.

Other states where the share rose more than 25 percentage points were California, Oregon, Arizona, New Jersey, Washington, North Dakota and Nebraska. The only states to buck the trend were Wyoming and Rhode Island, where apartment-construction permits dropped by more than half since 2005.

When Is the Turning Point?

Debate rages over whether a turning point has been reached as millennials begin to enter their late 20s and early 30s. Will they stay in the urban spots they’ve come to love or will many move to the suburbs to have children, just as their boomer parents did, for more space, better schools and less crime?

But Jonathan Spader, a research associate at the Joint Center for Housing Studies at Harvard University, said the need for new urban apartments is likely to continue. The center released a study of rental housing in December.

Rents are rising and vacancy rates for apartments are near 30-year lows, Spader said, and if some older millennials are buying houses, younger ones are still waiting for a chance to move out on their own.

The annual share of first-time homebuyers is at its lowest ebb in three decades, according to a National Association of Realtors report, and a new 3-percent-down program had little effect in 2015. Buyers have been discouraged by higher home prices and mortgage rates, and rising rents are making it harder for them to save, the report said.

“Those things together suggest a bull market at the national level,” for apartments, Spader said. “Growth in demand is rising and new multifamily construction, at least in the short term, is here to stay.”

The Federal Home Loan Mortgage Corporation (Freddie Mac) also predicts continued growth in apartments this year, saying the key drivers of the boom are still in place: rising incomes and more young people setting out on their own.

Rents are projected to rise fastest in San Francisco, Oakland, Los Angeles, Seattle and Denver, and to increase moderately in the District of Columbia and Minneapolis, according to the forecast. Most renters still see buying a house as unaffordable, according to a survey this month by Freddie Mac.

While millennials are the most important factor in demand for new apartments, according to a Federal National Mortgage Association (Fannie Mae) report this month, a significant number of their boomer parents are also renting, especially in large buildings.

Baltimore apartment developer Tom Bozzuto wrote last year about the experience of renting an apartment for the first time in 42 years, in the District. Boomers like him want the same urban amenities as millennials, he said.

“This is not a generation looking to rest in their retirement,” he wrote. “This is the generation that invented rock ’n’ roll. ... They will want to continue to party until the very end.”

Chris Porter, chief demographer for John Burns Real Estate Consulting, in California, said boomers still prefer buying to renting, but their sheer numbers are so large that even a small share of renters will have an effect on apartment construction.

The last 10 years have seen an increase of almost 5 million people in the 20-29 age group, the most likely to want urban rentals. The number of empty-nesters, ages 55-64, has gone up by more than 10 million.

Given their relative affluence, empty-nesters “would be more aligned with the increase in luxury rental living,” Porter said. “I don’t think we’re going to see a massive shift in their homeownership habits. But given their size, we are likely to see a higher number of older renters.” 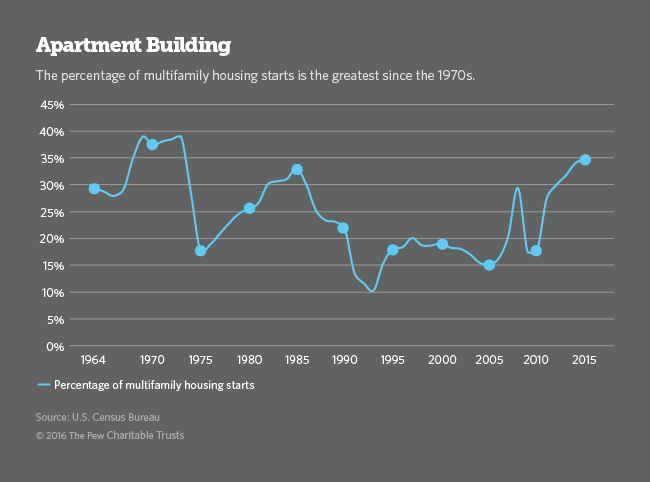 Cities may find themselves trying to compete with suburbs to hold on to residents as millennials age, Spader said, by improving services like parks and schools that make life more amenable to young parents.

For instance, Growing up Boulder focuses on getting children’s input for designing neighborhood amenities like parks and downtown public areas, using UNICEF guidelines for child-friendly cities. It’s a partnership between the city, the local school district and the University of Colorado.

Another concept gaining traction is the “adventure playground,” meant as an antidote to the extreme parental supervision most children experience in big cities. The playgrounds spend more money on employees to watch children than on fancy-looking amenities, and encourage children to decide by themselves how to play.

“If you’re a kid in the city, your parents want to watch you all the time. What you need is more unstructured play. You don’t get to do a thing like draw on the wall or build a fort,” said Reilly Bergin Wilson, a director at Playground NYC, an adventure playground set to open on Governor’s Island in New York City. New playgrounds have already opened in places such as Mercer Island, Washington; and Berkeley and Irvine, California.

Not everyone sees raising children as a barrier to staying in dense, inner-city neighborhoods. Sarah Lenti, a political consultant, moved to Denver when she wanted to have children, in her late 30s, knowing the cost of living would be more manageable than in the District of Columbia, where she’d been living three years earlier.

Now the mother of twin baby boys, Lenti doesn’t see herself moving away. She did buy a car for the first time when the babies were born, because it’s illegal here to take them in a cab or car service without a car seat.

“We would be really isolated out there in the suburbs,” Lenti said. “For a modern family, urban living is the way to go. Everything we need is right here.”

Porter, the demographer, said more millennials may choose a more suburban life and a single-family home, but it’s hard to say when. Many millennials found their early career plans postponed by the recession, making it hard to move up to homeownership.

“The delays in life events — marriage, children — for the younger population have allowed them to live in more urban-type environments longer,” Porter said. “But, as they do get married and have children, I believe they will start migrating to more suburban areas, with schools and affordability among the many factors in that decision. It will just be at a later age than their parents or grandparents.”

Denver’s urban neighborhoods like LoHi — short for Lower Highland — have seen an influx of young people and “scrapes,” or single-family homes and duplexes torn down to make room for rental apartments, in recent years, said Colorado state demographer Elizabeth Garner.

Garner doesn’t see the trend stopping any time soon, because the influx caught the construction industry flat-footed after the housing bust in 2007. “Some people might consider it a boom. I consider it making up lost ground,” Garner said.