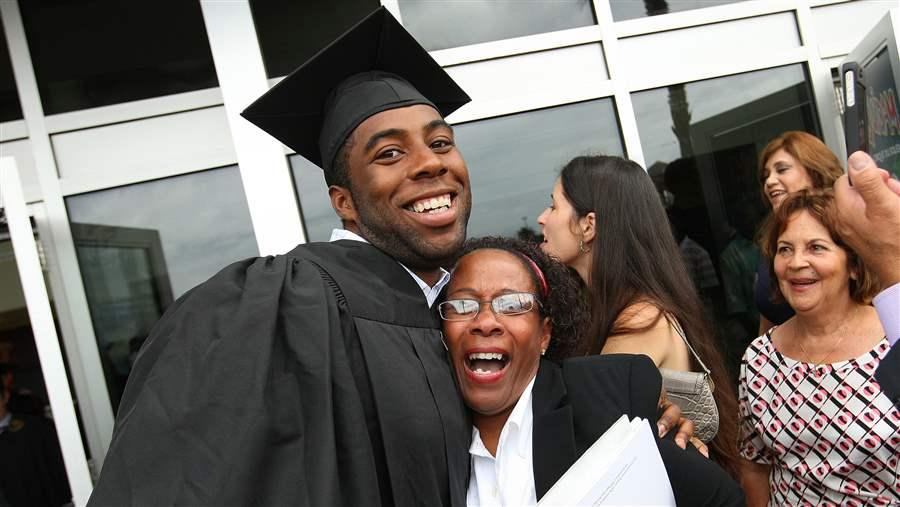 To fill jobs in a more demanding economy, states need more minorities with college degrees like this 2013 graduate of the University of Central Florida’s College of Medicine.

In 15 years, California expects to be about 1.1 million college graduates short of the number needed to fill jobs that require at least a bachelor’s degree.

Already, the nation’s most populous state is a minority-majority state — one in which racial and ethnic minorities comprise more than half the population. And blacks, Hispanics and American Indians not only are less likely to go to college, but their graduation rates are also lower than that of whites.

California is a bellwether for a nation that is becoming more diverse, whose economy is demanding a better educated workforce, and whose state colleges and universities are increasingly pressured to deliver it — which means making sure minorities, especially African-Americans, finish school and get degrees.

College graduation rates among African-American students have lagged behind the national average for a variety of reasons, including poor preparation at the K-12 level, family issues, feeling alienated at school, and financial pressure from rising tuition costs. (Latino and American Indian students also lag, but not as much.)

Among 255 four-year state colleges and universities with a large enrollment of minority students, combined graduation rates for African-American, Hispanic and American Indian students rose from 43.8 percent to just over 50 percent from 2003 to 2013, according to the Education Trust.

Many educators, such as Kumea Shorter-Gooden, chief diversity officer at the University of Maryland, say that because public universities receive state funding, they have an obligation to educate the citizenry. Admitting students and not helping them succeed doesn’t make financial sense, she said.

Other educators, such as Angela Dillard, associate dean for undergraduate education at the University of Michigan, agree.

“At the end of the day, it’s just the right thing to do,” Dillard said. “And it’s the smart thing to do for our future workforce.”

University of California President Janet Napolitano plans to increase enrollment, adding 10,000 more undergraduates over the next three years at its 10 campuses. The university system is sending administrators, including Napolitano, to high schools to encourage low-income minority students, who reflect the state’s shifting demographics, to enroll. And it is stepping up efforts to get students to graduate on time.

Like nearly every major state university, the University of Nebraska has been focusing on increasing the graduation rates of all students, said Amy Goodburn, the associate vice chancellor for academic affairs.

But the school also put in place programs, such as the William H. Thompson Scholars Learning Community, to help disadvantaged students, many of whom are minorities. (By law, the university cannot award scholarships based on race, but it can issue scholarships to students who’ve faced challenges in their lives.)

The program, which started in 2008 and is funded by the Susan Thompson Buffett Foundation, gives a full ride to promising students from low-income families. Thompson scholars live together and receive academic support and intensive mentoring.

The program’s success inspired the university to add programs that pair students with academic coaches and financial aid counselors, like First Husker, for students who are the first in their family to attend college, and Emerging Leaders, for students from disadvantaged backgrounds.

The school’s most recent retention rates — the rate of students who enrolled in 2014 and returned for the 2015 academic year — were 68 percent for black men and 80 percent for black women, Goodburn said. And this year, applications from minority students more than doubled.

The University of Maryland launched a diversity initiative in 2010, including programs to address the achievement gap between white and minority students. Fifteen percent of undergraduates on the campus are black.

Another, longer-standing, program targets talented African-American and Latino men. The eight-year-old College Success Scholars program brings in students the summer before their freshman year and supports them throughout their college career. Parents are also encouraged to get involved, Shorter-Gooden said.

How has the university done it?

“The easiest answer is that we’re the most selective institution in the state,” said Dillard, who helps oversee undergraduate education in the university’s largest college, the College of Literature, Science and the Arts.

Still, she said, “we want to close the gap completely.” The university wants not just to improve students’ graduation rates, but also to boost their GPAs, improve their quality of life, and prepare them for fulfilling careers, she said.

To that end, the university has invested heavily in its Comprehensive Studies Program. Accepted students, who come from disadvantaged backgrounds, start their freshman year early with an intensive, seven-week summer bridge program. Once the fall term starts, they receive academic counseling and are eligible to participate in smaller study sessions for more challenging courses.

The idea is to give first- and second-year students support so they can thrive, Dillard said.

The program, which serves 2,500 students, got its start in the late ’60s, and originally was intended for African-American and Latino students. But in 2006, Michigan effectively outlawed affirmative action by public colleges. Now, the program targets a broader segment of the state’s population, focusing on students from low-income families, first-generation college students, and students from rural high schools — which means it serves more white students, Dillard says.

Still, she said she hopes the program can be positive for black and Latino students, as well. “They won’t be so isolated, this population of talented young people who haven’t had the same advantages as some of their peers.”

States have a vested interest in a college-educated workforce.

Federal, state and local governments enjoy greater tax revenue from college graduates, according to a 2013 report by the College Board, a national education advocacy group. The report also found that adults over 25 with only a high school degree are five times more likely to rely on food stamps and school lunch programs.

College graduates earn on average twice what workers with only a high school diploma earn, according to the U.S. Department of Education.

Today, a high school degree is no longer enough to guarantee admittance to the middle class, said Antoinette Flores, a post-secondary education policy analyst at the Center for American Progress, a left-leaning think tank based in Washington, D.C.

“Fifteen years ago, you didn’t have to go to college,” Flores said. “You could find a middle-class job without a degree. But that’s not the case anymore.”