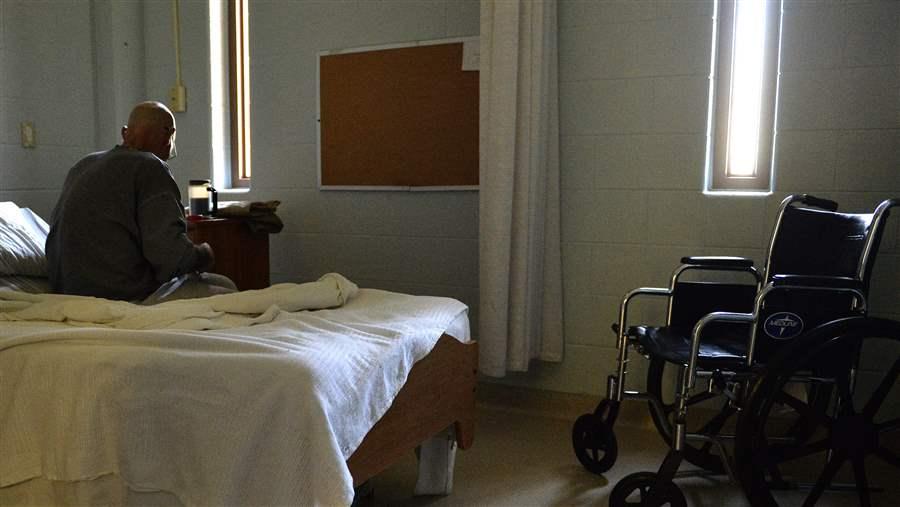 A patient in the medical wing of the Kentucky State Reformatory in LaGrange. As the elderly population in state prisons keeps climbing, correctional systems are adding more services geared toward aging inmates, including hospice services and assisted living units.

CAPRON, Va. — Walter Melvin Atkinson is a bit vague about how long he has been in the assisted living portion of the Deerfield Correctional Center and how long he has left on his sentence. He claims to not even remember the crime — pedophilia — that landed him here.

At 92, “Speedy,” as he is called ironically by fellow prisoners and guards, is frail enough to require a wheelchair to get around, and his inmate caregivers rushed to his side to grab from his shaking hand a coffee mug that seemed destined to spill all over his cot. A huge, bright orange star has been sewn on to the white blanket that covers the cot — an idea the unit manager, Kathy Walker, dreamed up to help Atkinson spot his own bed among the six rows of beds in the spotless unit.

Atkinson is representative of an ever deepening trend in state corrections systems, and an ever growing problem, too. According to Human Rights Watch, from 2007 to 2010, the increase in the elderly population, 65 and up, being sentenced to state and federal prison outpaced the increase in the total population by 94 to 1.

In 2013, nearly half the $58 million that Virginia spent on off-site prisoner health care went to the care of older prisoners, according to Trey Fuller, acting health services director in the state Department of Corrections. “Over time,” Fuller said, “we’ll need more and more money for that population because they will need more drugs, more specialist visits, more nursing hours, more everything.”

Many states have taken steps to reduce their prison populations by releasing nonviolent inmates or by diverting some offenders to community programs before sending them to prison. But corrections officials say those reforms alone will do little to decrease the population of older prisoners who are serving mandatory sentences or have committed violent crimes.

Several states have adopted programs such as early release for geriatric patients or “compassionate release” for the dying. But advocates for prisoners say the programs are often so cumbersome and restrictive that few older prisoners are able to take advantage of them.

The graying of the U.S. prison population reflects the rising median age of Americans since 1970. But that broader trend doesn’t fully explain the sharp increase in older prisoners. For that, corrections officials point to two factors. One is a steady increase in the rate of older adults entering prison. The second, and more potent, factor is changes enacted in the get-tough-on-criminals 1990s that resulted in longer prison sentences.

Virginia’s problem was compounded in 1995 when the General Assembly eliminated parole for any offender entering its prisons from then on.

To accommodate the growing number of older prisoners, most states have been adding or retrofitting facilities.

“Prisons weren’t designed for patients who are getting older,” said Owen Murray, chief physician for Correctional Managed Care, University of Texas Medical Branch, which overseas health care for most of that state’s prisons. “They were designed for people 18 to 55” and who were able to walk, Murray said. One in five Texas prisoners is older than 50.

States have had to install ramps and shower handles and make other physical modifications. Many prisons have had to create assisted living centers with full-time nursing staffs, as Deerfield has. In addition, at least 75 U.S. prisons, including Deerfield, provide hospice services for dying prisoners, according to the Vera Institute of Justice, a nonprofit that advocates for criminal justice reform.

In prison, services for the elderly are often stretched thin. The 57-bed assisted living unit at Deerfield is always full; there’s a waiting list to get in. The nearby 18-bed infirmary provides hospice services, but its beds are also needed for nonterminal acute care patients, such as inmates who have just had surgery and need special care while they recover.

As a result, Deerfield has tightened restrictions on which elderly patients can go to assisted living or hospice care. For example, it used to be that prisoners would be considered eligible for assisted living if they could not perform any one basic task such as bathing, dressing or walking, said Susan Wright, nurse manager of assisted living at Deerfield. Now, they must be unable to do two or three or them.

People sent to prison are generally less healthy than the general population, having abused drugs and alcohol or neglected their health for many years. Prisoners have much higher rates of cardiac disease, high blood pressure, hepatitis C, diabetes and other chronic diseases than the general population. That is why corrections officials consider that old age comes much sooner for prisoners.

“The norm in prisons is to use 55-and-older as the metric associated with older prisoners primarily because the consensus is that our population is 10 years ahead, clinically,” of people on the outside, Murray said.

Prison is a particularly treacherous place to get old. Getting to a top bunk is difficult for many aging prisoners, as is climbing stairs. Hearing loss, dementia and general frailty can make it difficult to comprehend or obey rules. And being infirm in an institution full of young predators can make older prisoners vulnerable. “If there’s an old lion or gazelle,” said Phillip Wheatley, one of the prisoner caregivers who tends to Atkinson, “the young ones are going to take advantage.”

When aging prisoners do reach the end of their sentences, corrections officials often have a hard time placing them, even if they look beyond their state. “Private nursing homes don’t want to take elderly offenders who were murderers or sex offenders,” said Virginia’s Fuller. He is currently keeping a wheelchair-bound former prisoner in a hotel, where a nurse visits daily, “because we couldn’t find a home for him,” he said.

Atkinson seems likely to present a similar problem. He was sentenced to 27 years in 1990 for pedophilia, paroled in 2005, and taken back into custody in 2008 for entering a school in violation of his parole. Thanks to credit he earned for good behavior, Atkinson could be released later this year, but his criminal record will likely make it difficult to find an outside assisted living facility or nursing home willing to take him.

Dealing with an aging prison population isn’t so complicated, said Texas’ Murray. “Either you figure out ways to get them out of the prison system and on to Medicare, or you choose to take a firm line that those patients have to do their time and you need to fund those facilities and care services that are necessary.”

So far most states have opted for the second approach, which means continuing to add services for an elderly population, including a special dementia unit for prisoners in New York state and housing units just for the elderly at Ohio’s Hocking Correctional Facility.

In 2012, Connecticut contracted with a private nursing home in Rocky Hill to care for elderly and infirm inmates granted parole. But even there, the state is locked in a battle with the federal government over whether the facility qualifies for Medicare or Medicaid reimbursement.

Several states have a mechanism they could use to shed some older prisoners. Louisiana, Ohio and Virginia have “geriatric conditional release” laws that make old age grounds for consideration for an early release. In Virginia, prisoners are automatically considered for release if they are 60 and have served 13 years or if they are 65 and have served five years.

Last year, 505 eligible prisoners were considered for geriatric release, according to Karen Brown, chairwoman of the state’s Parole Board. Only 3 percent were granted release, she said, adding that many of those who were denied had committed violent crimes.

Decisions about aging prisoners and the risk they would pose to the outside world should better reflect their medical conditions, said Brie Williams, an associate professor of geriatric medicine at the University of California, San Francisco, who studies aging in prison. “Health care professionals and criminal justice administrators should be coming together … to evaluate people for release,” she said. “We need to develop different approaches to their parole that are informed by their medical state.”

Virginia, like most other states, also permits the governor to grant clemency to prisoners certified by doctors to have less than 90 days left to live because of terminal illness. Last year, two Virginia prisoners received such clemencies.

Studies have found that older ex-offenders are less likely than younger ones to commit additional crimes after their release. But politicians and the public don’t seem willing to release former murderers, rapists and sex offenders, even though they are decades removed from their crimes and physically incapable of repeating them, said Liz Gaynes, president of the Osborne Association, a nonprofit that works on behalf of ex-offenders.

“It comes down to they did a bad thing and they should be punished,” she said. “Endlessly.”

States will be forced to pay more and more for that attitude, Gaynes said. “What to do about this is going to be the challenge for prisons in the next 20 years.”

Strategies for Reducing Inappropriate Antibiotic Use