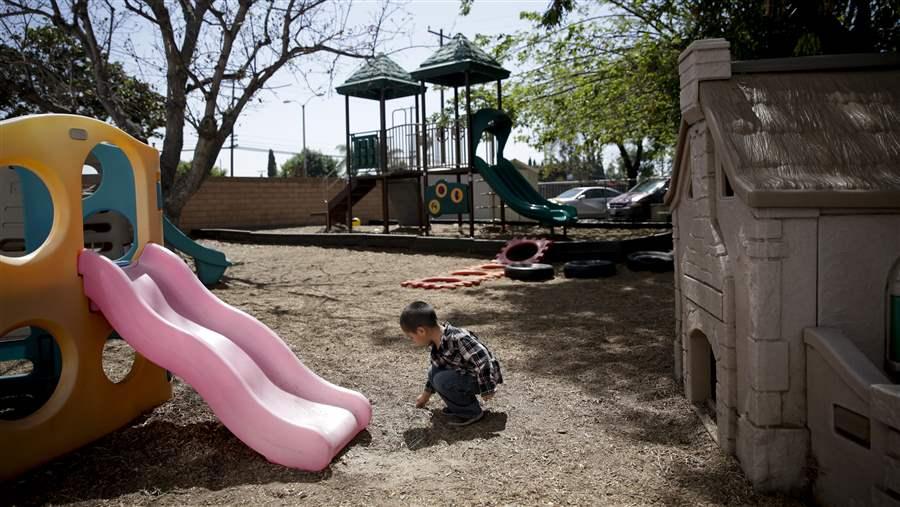 Is it in a child’s best interest to split time as evenly as possible between divorced parents?

It’s been about 40 years since the majority of moms stayed home, and married dads in the 21st century spend twice as much time caring for their children as they did back then.

Yet when parents divorce or separate, custody arrangements are more likely to reflect life as it was in 1975, with the mother as the primary caretaker and the father working to help support a child he seldom sees.

As fathers become more vocal about what they see as inequities in custody cases — and as more research shows how important it is for fathers to be present in their children’s lives — states are considering changing their custody laws.

Five states — Colorado, Florida, Maryland, Massachusetts and Missouri — are looking at proposals that would require judges to presume that it’s best for children to split their time as evenly as possible between their two parents. Utah enacted a similar law last year.

State laws have historically directed judges to determine custody based on what is in a child’s best interest, looking at factors such as which arrangement would disturb his or her life the least and be safest. The proposals would instead require judges to presume it’s best that both parents be awarded a substantial amount of parenting time — often at least a third of the time — and, if they don’t award substantial time to both parents, to explain why it wouldn’t be in the child's best interest to do so.

Fathers’ rights groups, such as the National Parents Organization, are pushing the proposals, arguing that they will give fathers a better chance at a fair ruling and pointing to new research that shows how joint custody may be better than sole custody for children’s health.

But only a fraction of custody cases actually are up to a judge to decide — in Washington state, for example, nine in 10 cases that go to court are settled — and the cases that judges do hear are more likely to be ones in which parents can’t communicate or cooperate to make decisions. In those high-conflict situations, some researchers have warned that joint custody may be harmful to a child’s well-being.

Laws that encourage shared parenting may sound “seductive” to state lawmakers, but they often force families into bad situations, said Maritza Karmely, a professor at Suffolk University Law School in Boston. Bar associations, judges and lawyers have come out against some of the proposals.

“A presumption is a pretty radical step,” Karmely said. “That assumes that shared parenting works for most families, and I think that is an enormous assumption.”

But Ned Holstein, founder of the National Parents Organization, said none of the proposals forces judges to do anything. They would still be able to use discretion and decide what’s in the best interest of the child.

There haven’t been sweeping changes to state laws on custody arrangements since 1970, when the Uniform Marriage and Divorce Act set the “best interest” standard.

But the dynamics of American families have changed significantly since then. The share of children under 18 living with both parents fell, from 85.2 percent in 1970 to 69.2 percent in 2015. And more fathers are living away from their children, up from 11 percent in 1960 to 27 percent in 2010, a recent Pew study found; the shift is likely due to more children being born to unmarried parents. (Pew also funds Stateline.) At the same time, the amount of time married fathers spend caring for their children has more than doubled, from 2.5 hours a week in 1965 to 7.3 hours in 2010, according to Pew findings.

And that may be a good thing. Research shows that children who spend more time with their fathers are more likely to succeed academically and less likely to be delinquent or have substance abuse issues.

They will also grow up to be healthier mentally and physically, said William Fabricius, an associate professor of developmental psychology at Arizona State University who has been studying fathers and divorce since 2000.

In a yet to be published 10-year study funded by the National Institutes of Health, he found that children who felt they mattered to their fathers were less likely to later have mental health problems such as depression or anxiety.

“There are attributes and benefits that both parents bring to the child,” said Missouri state Rep. Kathryn Swan, a Republican who has sponsored shared parenting bills the last two years.

The Missouri Bar last year opposed provisions in Swan’s bill that put limits on judges’ discretion when deciding child support arrangements in cases where equal parenting time is granted; and that required judicial education on shared parenting. This year’s bill no longer includes those provisions, but the group has not yet taken a position on it.

Some fathers, such as Troy Matson of Jacksonville, Florida, push for shared custody, only to get worn down by the time, the cost and the acrimony of their court battles. Matson’s daughter was just a few weeks old when he and his wife started divorce proceedings. He asked to have her half the time. After contentious court hearings, the couple settled; he now sees his 4-year-old daughter 30 percent of the time.

Matson, who now chairs Florida’s chapter of the National Parents Organization, helped push a Florida bill that would require judges to presume that approximately equal time sharing is best. The bill, which passed the Legislature last week, would also require judges, when they rule differently, to show that equal time sharing is not the best solution. If Republican Gov. Rick Scott signs the bill, Florida would have one of the strongest shared parenting laws in the nation.

“I grew up without my father,” Matson said. “When I was a kid, I told myself if I’m ever blessed with children, I would do everything I could to be as involved in their lives as possible.”

While many family law and child psychology specialists agree that shared parenting is best in situations in which both parents are interested, involved and capable, they have concerns about other situations.

Domestic violence awareness groups have opposed some of the proposals, arguing that a victim shouldn’t have to prove that it’s not in a child’s best interest to live half the time with an abusive ex-partner. And specialists in the field have come to different conclusions about whether separating infants from their mother would be best for the infant’s well-being.

Most agree that each case is unique. “It is hard to find fault with examining each case and each child individually, when deciding what works best for their family and them,” said Peter Salem, executive director of the Association of Family and Conciliation Courts, a national trade association for family law professionals.

Fathers’ rights groups are often the ones pushing for the laws, but it’s not about the parents, said Robert Langlois, a former family court judge in Massachusetts who is now a lawyer there. “It’s about the kids, and what is in their best interest, not in their parent’s best interest,” he said.

When approaching a case, a judge looks at what the situation has been, if that should change, and why, Langlois said. Other factors judges look at include how old the children are, where they go to school, and where the parents live.

A bill proposed in Massachusetts would change the law to encourage shared parenting without requiring judges to presume equal time is best. Still, the change would require judges to provide reasoning when deciding a parent should not have significant time with a child.

“If you’re going to separate a child from one of his or her parents for most of their childhood, it’s only fair to say why,” said Holstein of the National Parents Organization, who lives in the state.

Proponents of shared parenting argue that current laws treat fathers unfairly. But gender bias in custody cases may be more perception than reality.

While mothers are custodial parents 82.5 percent of the time, it may just be because fathers aren’t asking for that job. A study in Massachusetts found that fathers who actively sought primary or joint custody obtained it more than 70 percent of the time.

In at least one state, specialists say recent changes to custody laws have made a difference. The Arizona Legislature passed a policy statement in 2011 in support of shared parenting and, in 2012, changed custody law to mirror the statement. This changed the culture of the court system, at least in Maricopa County, according to both Fabricius of the state university and Annette Burns, a lawyer there who specializes in family law.

The perceptions of parents have changed, too, Burns said. Now, both parents know they are likely to get a significant amount of time with their child.