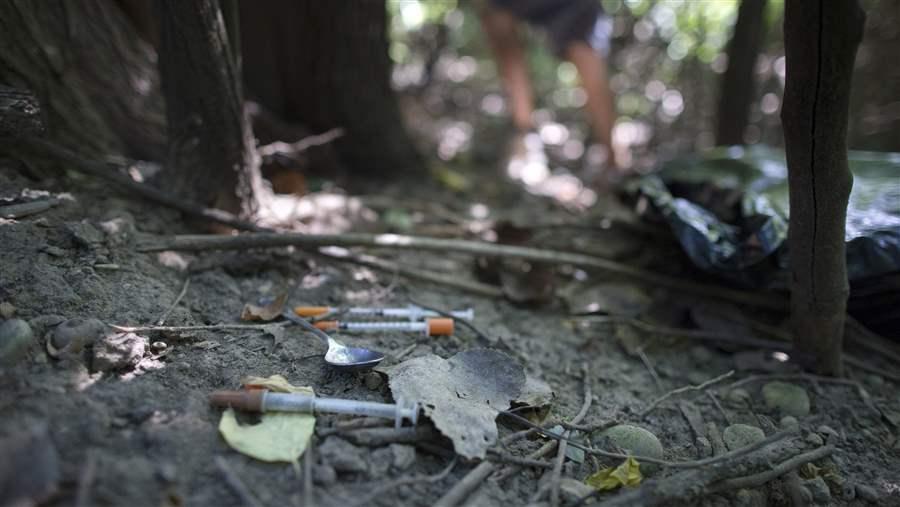 Used heroin syringes and cooking spoons in a park in Ohio. Some local and state officials are pushing for legal sites where heroin users can inject drugs under medical supervision.

That’s how Mayor Svante Myrick describes Ithaca, New York, where he hopes to open the nation’s first safe injection facility — a place where heroin users could shoot their illegal drugs under medical supervision and without fear of arrest.

His proposal, part of a plan to address drug abuse in the 31,000-person college town in central New York, is not a novel idea. Safe injection sites, which also connect clients to treatment programs and offer emergency care to reverse overdoses, exist in 27 cities in other parts of the world. Some have been around for decades.

But no safe havens for injecting illegal drugs exist in the United States, which is experiencing an epidemic of opioid addiction and a rising tide of overdose deaths. Some lawmakers in California and Maryland want to change that and make legal what addiction specialists say is already going on at many clinics or needle-exchange programs across the country.

Proponents of the sites say they reduce the risk of dying from heroin use because addicts are drawn out from alleys, public restrooms and run-down buildings and into supervised settings where they can be quickly treated for overdose symptoms. Once there, access to clean needles reduces an addict’s exposure to infections, as well as diseases like hepatitis C and AIDS. And, supporters say, drug users are more likely to pursue addiction treatment once they develop trusting relationships with clinic staffers.

Other lawmakers, however, warn that supervised heroin shooting galleries run contrary to state and federal drug laws and would encourage illegal drug abuse.

In New York’s Tompkins County, a jurisdiction of just over 100,000 people that includes Ithaca, at least 14 deaths were drug-related in 2014, up from six in 2010. An addiction treatment center there reported that more than a quarter of its admissions in 2014 were for opioids, second only to alcohol.

“We’re not the capital of heroin in America or even in New York state,” Myrick said. “But we’re losing people.”

Studies of safe injection sites, largely in Canada and Australia, have found that they help reduce overdoses and don’t increase drug use or trafficking in the communities where they’re located.

Sites in the United States could violate the federal Controlled Substances Act, which prohibits possession of drugs such as heroin or cocaine or operating a place where people use them. But Congress could change the law or the U.S. Justice Department could make exceptions for the sites, said Leo Beletsky, a law and health sciences professor at Northeastern University.

Most state laws mirror the federal act and would also need to be amended to allow injection sites to operate legally, he said. Though if states begin legalizing them, the federal government could choose not to prosecute people who run and use them — just as the Justice Department has decided not to enforce federal laws for possessing, processing or selling marijuana in states that have legalized it.

“Do you try to solve these [legal] problems first? Or do you proceed with what you know is needed, the innovation that is needed in, really, a time of national crisis?” Beletsky said.

Advocates would rather establish the injection sites through legislative action, but creating the sites through executive orders issued by mayors or county executives could create quicker access to care, he said.

Even with the approval of the district attorney in Tompkins County, Gwen Wilkinson, Myrick is not interested in opening a site in Ithaca without permission from the New York Legislature and Democratic Gov. Andrew Cuomo.

“Our hope is once this is put in place, we’ll be ready for the next epidemic,” he said.

Maryland state Del. Dan Morhaim, an emergency room physician, wants to create safe injection sites in his state, saying supervised injection would help break the cycle of drug use by exposing addicts to counseling and making them less prone to drawing others into the habit of drug use.

Morhaim’s proposal received little opposition during a recent legislative hearing, and officials at the University of Maryland School of Medicine said they would “seriously consider” establishing a pilot program to evaluate the concept if the legislation passes.

“If all our polices were doing great, we’d be talking about how addiction rates are down and streets are safer,” said Morhaim, a Democrat.

Opioid deaths in Maryland increased by 76 percent between 2010 and 2014, to nearly 900. And according to the American Society of Addiction Medicine, drug overdoses are the leading cause of accidental death in the United States. In 2014, heroin contributed to about 10,600 deaths nationwide.

But proposals like Morhaim’s and Myrick’s are not without opposition.

Steve Schuh, a Republican county executive from Anne Arundel County, Maryland, called Morhaim’s bill one of the most “irresponsible” that the General Assembly has ever considered.

Providing those in the throes of addiction a place and the tools to use heroin is “careless, reckless, and unconscionable” and tantamount to making the state an accomplice to murder, he said in a letter to the chairman of the health committee, which held a hearing on the bill this week.

New York state Assemblyman Edward Ra, a Republican, opposes Myrick’s Ithaca plan because he said it would stand in the way of cooperation between local, state and federal law enforcement. The state should instead focus on treating more heroin addicts, Ra said.

“I object to the idea that this drug can be used safely. It’s a drug that kills people.”

Matt Curtis, policy and program director at Voices of Community Activists & Leaders (Vocal), a nonprofit that offers counseling, hepatitis screening, syringe exchanges and other services to drug users in New York City, said it would be easier to establish injection sites locally than at the state level. A campaign for injection sites in New York City already has the support of at least one city councilman.

“We’re not quite there,” Curtis said. “We are still in the stage of getting people familiar with the idea.”

Although no sanctioned injection sites exist, advocates for them say informal sites exist at needle exchanges around the country where addicts can already get clean syringes and substance abuse counseling.

Organizations that operate exchange programs say they do not condone drug use and injection is still prohibited on-site. But because people use bathrooms at the exchanges to shoot up after receiving new needles, the organizations have taken steps to make those spaces safer.

In the past, staff at some exchanges tried to discourage drug use by installing black lights so users couldn’t find their veins and timing how long each person spent in the bathroom. But these practices led to overdoses as drug users rushed to take large amounts of heroin before being detected by staff members.

“That is terrible public health practice and you’re basically saying, ‘Go out and use it in the street,’ ” said Curtis of Vocal, which runs a facility in Brooklyn.

Now, many exchanges have installed syringe disposal boxes, put intercoms in the bathrooms and installed emergency locks so staff members can get into a bathroom to help if someone becomes unresponsive.

Vocal made similar renovations to its facility in 2014, not because very many people were using drugs in the bathroom, Curtis said, but because the changes make the site safer for clients and staff.

Supervised injection sites are part of a “harm reduction strategy” to reduce the negative effects of drug abuse through public health initiatives. The harm reduction theory stresses the rights of drug users and acknowledges that abstaining from drug use is not the only measure of improving the quality of life of an addict.

The Boston Health Care for the Homeless Program is applying this theory in its new Supportive Place for Observation and Treatment Center. The center prohibits drug use and won’t offer needle exchange. But users can come there after they inject to wait out their high under medical supervision and there is an exchange close by, said Jessie Gaeta, the group’s chief medical officer.

As many as a handful of clients overdose at the main Health Care for the Homeless site each week and Gaeta said she thinks the rate of overdoses in the Boston area is increasing because people are taking heroin that is combined with other drugs like benzodiazepines, which also have a sedative effect.

“Dead people don’t recover,” Gaeta said. “Our hope is to make it less dangerous for the people who are currently using, who are not seeking treatment or not able to access treatment. I like to think we’re enabling people to live.”