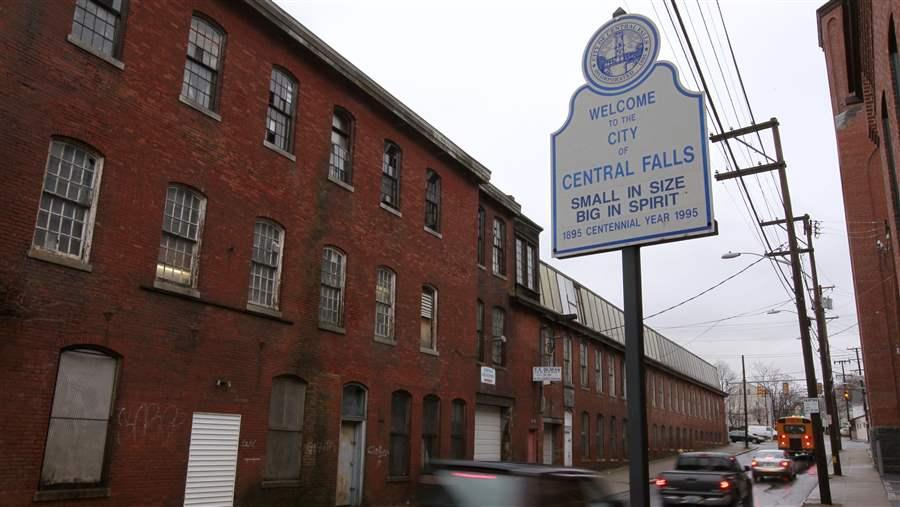 After Central Falls, Rhode Island, went into bankruptcy, financial advisers said the city should merge with nearby towns, but no other town wanted it. Mergers of municipalities and their services can sometimes save money, but political considerations often get in the way.

Three times in 40 years — in the 1950s, in the ’70s and in the ’90s — the Township and the Borough of Princeton, New Jersey, tried unsuccessfully to merge. The two finally combined into the new Municipality of Princeton a few years ago, allowing them to cut out redundant services and save millions on policing, snow removal and trash pickup.

Across the country, advocates of consolidation, including governors like New Jersey’s Chris Christie and Illinois’ Bruce Rauner, both Republicans, tout the municipal combinations as a way to streamline services and save taxpayers money.

An Illinois report released in December sparked a conversation in that state and in others. It found that living in an area with too many layers of government increases property taxes on residents (the report didn’t break out business taxes) and makes it all but impossible to remember which governmental entity governs what.

But the Municipality of Princeton, formed in 2013, is an exception. Consolidations have often been discussed and studied, but the mergers rarely take place.

State officials and affected residents almost always must approve a proposed merger, and residents often balk, especially if one entity is in better fiscal shape. Government workers are usually opposed, fearing they will lose their jobs. And politics plays a role, too, as elected officials generally aren’t keen on giving up power.

Northern Illinois University professor Norman Walzer, who worked on that state’s report, said the baseline question is whether two or more units of government are needed if they do essentially the same thing and cover the same people. “Logically, the answer is ‘no,’ ” but history, politics and pride most times combine to undermine logic, he said.

Overlapping governments are especially common in New England, which has the most governments per square mile, according to Stephen Larrick, who studies states and localities at the Sunlight Foundation, a nonprofit that advocates for transparency in government. Those governments arose when cities developed as mill towns in the 1800s, with needs that were different from those of the surrounding farmland. Put simply, farmers didn’t want to pay for city fire departments.

Sometimes, overlapping governments were created to address a financing problem, Walzer said. Faced with legal limits on taxing or bonding authority, cities and other municipal entities would create another “authority,” with the power to tax or to float bonds.

“The city may feel, legitimately, that they need more services, transportation, parks or something, but they are at a tax rate limit or a bond limit, so, what do you do? You create another government,” he said.

The number of governmental entities has grown so much that states sometimes don’t even know how many municipalities or municipal authorities they have. Illinois identified 8,480 units of government that can collect taxes or have some fiscal authority, Walzer said. “Two weeks later, an attorney called to say he was working with two governments that we didn’t have on our record.”

Modern cities and their surrounding suburbs aren’t so different anymore. When the mill towns started to wane with the de-industrialization of the Northeast, the similar nature of their needs and the overlap in services became obvious. Towns in some areas, such as Greene County in Ohio, started to share services like police and emergency response communications. New Jersey’s Monmouth County tapped into a state system that serves many jurisdictions. But municipal consolidations like Princeton’s are still rare. 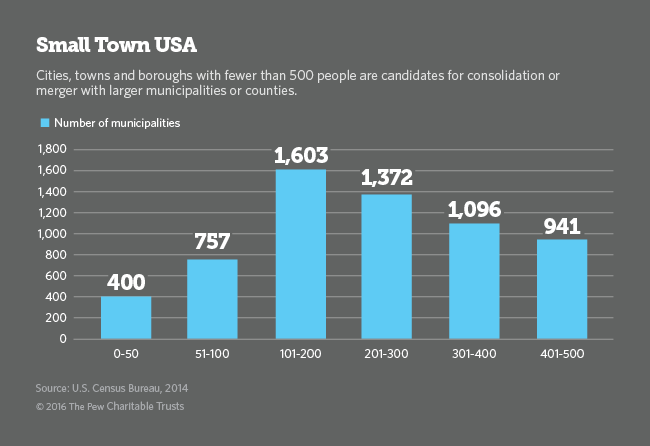 'I’m Not Going to Fire Mabel'

In Sangamon County, Illinois, which includes Springfield, the Citizens’ Efficiency Commission has been working since 2010 to find ways to merge services like government administration, public safety and public works. The group has had some success, according to Jeff Fulgenzi, senior planner with the commission, like getting regional mayors to meet on a regular basis to talk about coordinating services. But more often than not, the commission’s recommendations are ignored.

That’s because as soon as a consolidation recommendation comes out, officials go on “high alert” to counter it, he said, and ordinary citizens “don’t pay much attention to documents of this nature.”

For example, an Illinois statute allows for tax collectors at the township level, but 96 percent of property tax payments are made to the county treasurer, not the township, according to Fulgenzi. “We don’t need township collectors anymore,” he said. “Some of them have gone away, but others are fighting tooth and nail to stay alive. They are paid anywhere between $3,000 and $17,000 [a year]. As one person said, ‘I’m not going to fire Mabel.’ ”

Running for re-election in 2013, Christie pointed to the savings generated by the Princeton merger and called for other communities to streamline local government services, including police.

Nevertheless, support for the consolidations appears to be declining in New Jersey. Forty-five percent supported consolidating their municipal government with a nearby community, according to a 2014 Rutgers-Eagleton poll. That was down from 54 percent in 2010.

David Redlawsk, director of the Rutgers-Eagleton poll and professor of political science at Rutgers, speculated that the decline in support may result in part from smaller property tax increases in the state over the last few years. “While some towns have had large tax increases, many have not, which ironically may be reducing pressure to cut local government costs,” he wrote.

Last year, Nevada state Sen. Pete Goicoechea, a Republican, sponsored a bill to require the citizens of two areas he represents, the town of Ely (population 3,455) and surrounding White Pine County, to vote on a merger. The county had money problems for several years, and Goicoechea thought that a merger made sense — and that a majority of the people he represents would go along.

“Ely probably doesn’t need two seats of government,” he said, “and duplication of a city treasurer and a county treasurer.”

The measure passed the Senate and the House, but then Ely Mayor Melody Van Camp implored Republican Gov. Brian Sandoval not to go along. Sandoval vetoed the bill, saying it was an attempt to circumvent the existing petition process that would permit residents of the City of Ely and the surrounding county to put the issue on the ballot themselves if they wanted to.

Goicoechea is trying again this year, spearheading a petition drive in the county to put the issue on the ballot that way.

But Van Camp is still opposed, calling the move a “money grab” by the poorer county. Her city, she said, is doing just fine and running in the black. “Our little government runs real swell.”

In Princeton, the merger saved money, according to Liz Lempert, who was elected mayor of the Municipality of Princeton in 2012. For example, she said, both communities had 911 call centers in need of upgraded technology. Consolidating the centers saved money that was used to add a couple of police stations. In addition, a drug counseling facility in a run-down building took up residence in one of the old 911 call centers.

The merger saved the municipality $3.9 million in 2015, according to the most recent report from the municipality’s Citizens Finance Advisory Committee. Of that, $714,000 went to expanding residential trash collection and $436,000 to upgrading Internet services for county offices, among other things. Transition costs sucked up another $483,516, leaving $2.3 million in savings.

The main challenge for Princeton has been merging the two public workforces. “Can you have two people side by side doing the same job, getting paid differently? No,” the mayor said. She solved the problem by “harmonizing” the pay scales, which meant the lower-paid people generally got bumped up. That move, she acknowledged, didn’t save money, but kept morale up among municipal workers. In addition, some workers retired, others transferred to different jobs, and some vacancies created by attrition were not filled.

Lempert says snow plowing and trash pickup have improved for many residents. But there is some lingering dissatisfaction, including complaints about fall leaf and brush pickup. Under the borough’s old government, a truck used to drive around and pick up the detritus as it accumulated on the sidewalk. The township picked up the stuff on a set schedule. “We moved to having a schedule townwide,” she said.