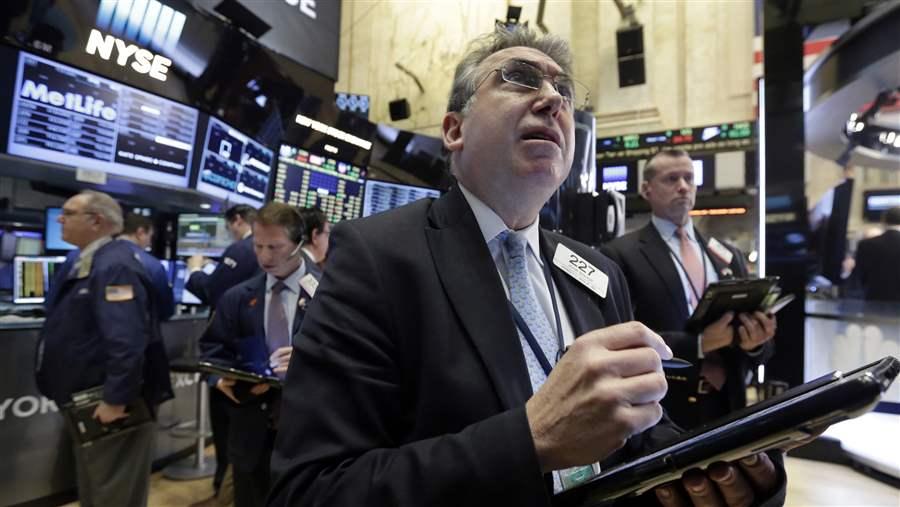 Traders work on the floor of the New York Stock Exchange. Stock market performance can have a ripple effect on state revenue.

This story has been updated; Connecticut state Rep. Vincent Candelora is a supporter of the rainy day fund legislation.

As the gap between the rich and the poor widens, states are finding that taxing the incomes of the rich means living with unstable budgets.

That’s because wealthy Americans are more likely to have investments in the stock market. When the market falls, so do their tax payments. Stock market turmoil can hurt state pension funds, too. But while it takes years for states to feel that impact, a dip in the markets — or a lackluster Wall Street bonus season — can create an immediate fiscal crisis.

California is bracing for lower-than-expected revenue from capital gains this year, and economists have advised New York legislators to scale back their expectations for next year (New York’s fiscal year ends this month).

Some states are adapting by tweaking their rainy day funds. Fundamentally, though, they’re grappling with a larger economic problem.

During a news conference last month, Malloy said that he’s long felt “nervous” about Connecticut’s tax receipts. “If you look at how we tax and how our income comes in, we are quite dependent on highest-income earners, and in many cases with passive income, to pay the tax bill.”

State personal income tax revenue was three times more volatile during the 2000s than during the previous two decades, said Rick Mattoon, a senior economist at the Federal Reserve Bank of Chicago. In a 2012 study, he found that the wild swings were driven by nonwage income, such as gains from the sale of stocks and real estate.

While nonwage income typically makes up a small share of state budgets, the share is large enough in some states that unexpected shortfalls — or surpluses — can create multimillion dollar spending problems.

States base their spending for each fiscal year on how much they expect to bring in that year from taxes and other sources. But because capital gains are swayed by the stock market, they’re very difficult to predict. That’s especially true this year: According to one analysis, the start of 2016 ranks as the third-most chaotic in the history of the Standard & Poor’s 500 index.

States can anticipate a couple of key events. Policy changes, for instance: many investors sold off assets in 2012 to avoid a looming federal tax increase. Or major public offerings: the year Facebook went public, California prepared for a capital gains bonanza as early investors and employees cashed in.

But exactly how much these kinds of events generate depends on the whims of the market.

Since 2010, Connecticut lawmakers have consistently overestimated or underestimated personal income tax proceeds — once by more than 11 percent — from payers with irregular incomes, a category that includes investors and some business owners, according to the Legislature’s nonpartisan Office of Fiscal Analysis.

Based on current receipts, that portion of income tax revenue is 4 percent below where it was last year, said Comptroller Kevin Lembo, “falling far short of the projections that were used to build the budget in the first place.”

By the end of the year, the fiscal office estimates that tax payments from irregular earners will be 9.3 percent lower than was budgeted for this fiscal year. Income taxes withheld from salaried workers, a much more stable source of funds, are expected to be down 1.6 percent.

When wealth shifts away from salaried workers and toward the top 1 percent, market fluctuations have a bigger impact on personal income tax revenue.

Connecticut has the widest gulf between high and low earners of any state, according to the Economic Policy Institute, a left-leaning think tank. Taxpayers in the top 1 percent of earners made about $2.7 million on average in 2012; the rest of the taxpayers averaged less than $53,000.

Connecticut’s wealth — and capital gains — are concentrated in Fairfield County, home to bedroom communities for Wall Street financiers and most of the state’s 13 billionaires.

Tax policy has further exposed some states to stock market risk, said E.J. McMahon of the New York-based Empire Center, a right-leaning think tank. New York moved its tax burden up the income scale in the 1990s, when it cut taxes for the middle class; and lawmakers keep extending a 2009 tax increase on wealthy earners, he said.

States may be exposing themselves even further by failing to raise income taxes when the economy sours, and failing to lower them when the economy improves. Since the ’90s, states have left tax laws virtually unchanged despite economic swings, Mattoon found in his study.

What Can States Do?

States can make budgets more predictable by relying on more stable taxes, such as sales taxes. Seven states — Alaska, Florida, Nevada, South Dakota, Texas, Washington and Wyoming — refrain from taxing incomes at all. But by turning away from taxing the ultra-wealthy, states risk increasing the tax burdens on the middle class and the poor.

Personal income tax payments comprise about half of Connecticut’s general fund revenue, according to the fiscal office there. Since 1991, Connecticut has taxed progressively — meaning that taxpayers in higher tax brackets face higher rates.

Lembo said that progressive structure isn’t likely to change. Instead, last year’s budget requires the state to automatically deposit revenue that exceeds estimates into a rainy day fund, beginning in 2021. (The Pew Charitable Trusts, which also funds Stateline, lobbied for the legislation and has advised lawmakers in California and Minnesota on similar reforms.)

McMahon argues that, rather than adjusting their rainy day funds, states should set aside capital gains and other volatile revenue sources for specific, one-time projects. That way they wouldn’t rely on the money to fund ongoing services.

In any case, Connecticut’s rainy day fund reform isn’t helping the state now. And the drop in estimated payments from taxpayers with irregular incomes was so sudden this quarter that Republican lawmakers say something else must be going on.

State Rep. Vincent Candelora, a supporter of the rainy day fund legislation, said he’s heard that millionaires are moving out of Connecticut to avoid the state’s high taxes, including the recently raised estate tax. “Many of our residents have homes in other states, so they’ll change residency to avoid the tax,” he said.

The Hartford Courant speculated last week that a single man’s departure to Florida (net worth: $11.1 billion) worsened the state’s deficit.

Other states haven’t reported a recent drop as sharp as Connecticut’s. Payments from irregular earners, however, were also lower than expected for both California and Massachusetts in January.

New York will end its fiscal year with more income tax revenue from nonwage income than expected, according to Democratic Gov. Andrew Cuomo’s 2017 budget plan. But his budget director told lawmakers at a recent hearing that the state would likely feel the impact of the stock market’s gyrations next year — and that the market’s outlook wasn’t good.

“There is broad agreement that New York state faces substantial risk given the nature of its revenue base,” said budget director Robert Mujica.

Mujica warned of other forces that could weaken the economy, including the collapse of the energy sector and China’s economic slowdown. Right now, both those factors are driving uncertainty in the stock market. And that’s already enough to disrupt New York’s budget.