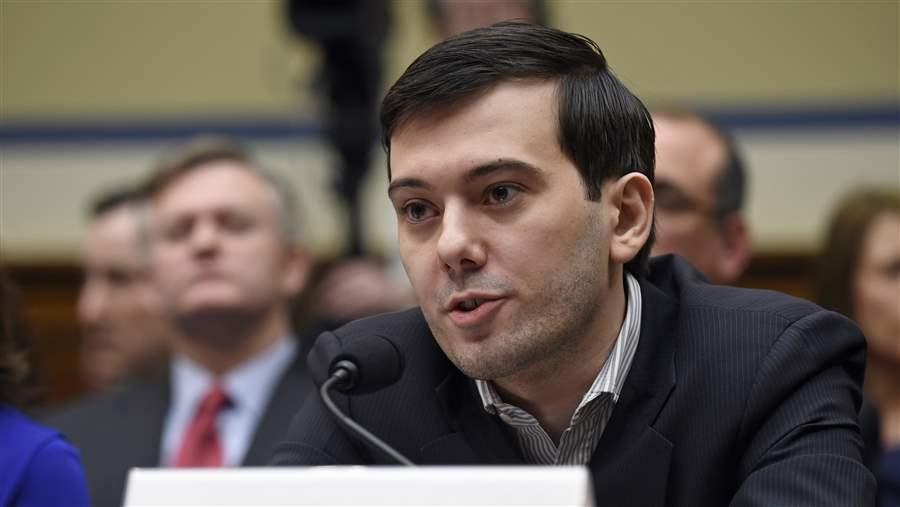 Pharmaceutical chief Martin Shkreli testifies on Capitol Hill last month about his company’s decision to raise the price of a drug that combats a certain parasite that threatens the lives of some AIDS patients by more than 5,000 percent. Legislators in at least 11 states have filed bills that would require drugmakers to disclose their costs to justify their prices.

Outraged by exorbitant prices for certain prescription drugs, lawmakers in at least 11 states have introduced legislation that would require pharmaceutical companies to justify their prices by disclosing how much they spend on research, manufacturing and marketing.

The bills are similar to a provision in President Barack Obama’s proposed 2017 budget.

The sponsors of the measures say they have a variety of goals: to educate policymakers and consumers about the reason for high prescription drug prices; to shame pharmaceutical companies into moderating their prices; and, in some states, including Massachusetts, to actually place a ceiling on prices that are determined to be unjustified.

“They are price-gouging,” said Massachusetts state Sen. Mark Montigny, the assistant majority leader and the author of a transparency measure in that state. The Democrat said he hopes the disclosures will embarrass drugmakers into setting their prices at levels that would make the drugs affordable to those who need them. “We not only have a right but a responsibility to push back on this special interest and say, ‘Hey, you’ve got to justify your price.’ ”

Unlike in most other Western nations, drugmakers in the U.S. face no limits on the prices they can charge — and those prices have steadily increased over time. The prices of medications rose 9.4 percent between 2006 and 2013, compared to a general inflation rate of 1.5 percent, according to the AARP. Spending on prescription drugs rose by 12.2 percent in 2014, while overall health care spending grew by 5.3 percent, according to the federal government.

And all health care payers — from individuals and private insurers to the federal government and the states — are grappling with how to meet those rising costs.

In addition to Massachusetts, transparency measures have been filed or carried over from last year in Colorado, Michigan, North Carolina, Oregon, Pennsylvania, Tennessee, Virginia and Washington. A proposal in New York has the strong support of Democratic Gov. Andrew Cuomo, while one in California was defeated in early January. Unusually in these days of hyper-partisanship, some of the bills have been filed by Republicans and some by Democrats.

A handful of transparency bills were filed last year, but none of them passed. But advocates like Montigny say continued revelations about high prices have only strengthened support for such legislation.

A generation of new drugs to cure hepatitis C, with a price tag as high as $95,000 for a course of treatment, as well as medications for some unusual forms of cancer that cost more than $100,000 a year, have drawn public scrutiny — and outrage.

Then there is the case of Martin Shkreli, a young pharmaceutical entrepreneur who raised the price of a medicine that eliminates a particular parasite that threatens the lives of some AIDS patients from $13.50 to $750 per tablet.

For now, those prices are a mystery that the industry has no interest in solving, said Leigh Purvis, director of health services research at AARP’s Public Policy Institute. “It’s basically a ‘trust us’ situation.”

The bills on transparency, Purvis said, demonstrate that the “trust us” approach is no longer satisfying consumers, policymakers, insurers, physician organizations and advocates for better health care access.

The pharmaceutical industry has so far been successful at fending off efforts to control how it sets prices, while keeping a tight lid on any information that would reveal how it arrives at those prices. It has even managed to block Medicare, the second biggest health plan behind Medicaid, from the ability to negotiate better prices for its 50 million beneficiaries.

The industry insists that it is being unfairly targeted by the transparency measures, pointing out that prescription drugs account for only 10 percent of health care spending in the United States, $300 billion out of $3 trillion per year.

Industry representatives also say the information being sought is proprietary and has little to do with the actual price drug companies charge. Pricing, said Priscilla VanderVeer, a spokeswoman for the Pharmaceutical Research and Manufacturers of America, the industry’s main lobbying group, is more related to the marketplace, to competition, and to how beneficial the drugs are.

Drugmakers say only a small fraction of drugs entering clinical trials eventually gain approval from the U.S. Food and Drug Administration — 7 percent, according to one study. Those that make it to market pay for research and development of the next generation of breakthrough drugs, which will also involve trial and error, VanderVeer said. That’s the way innovative therapies happen, she said.

Tufts University’s Center for the Study of Drug Development, which is largely funded by pharmaceutical and biotechnology firms, says it costs on average $1.4 billion out-of-pocket to bring a new drug to market.

In legislative fights across the country, two well-heeled and influential industries are pitted against each other. The pharmaceutical industry has contributed $9.6 million to the campaigns of state lawmakers since 2014, while the insurance industry has spent $21 million, according to the National Institute on Money in State Politics, a nonprofit that tracks campaign donations.

VanderVeer, of the pharmaceutical manufacturers group, says the whole pricing issue has been generated by insurance companies. She characterizes the transparency bills as “a somewhat cynical attempt to rile up pharma by insurance.”

Clare Krusing, a spokeswoman for America’s Health Insurance Plans, which represents commercial insurers, said the proposed legislation represents common-sense public policy: “Health plans have to make rates public and they are scrutinized by consumers and regulators so it’s clear where every dollar of premium is going. We don’t have that with drug pricing.”

Drugmakers have also enlisted some supporters. In Colorado, their allies include manufacturing groups and social service organizations that advocate on behalf of those with some diseases, such as the Partnership to Fight Chronic Disease and the Liver Health Connection. Eileen Doherty, executive director of the Colorado Gerontological Society, a nonprofit serving the elderly, said that although high drug prices are a major burden for the people she serves, “I don’t see any reason why the bill as written would make any difference.”

But Ginal says drug prices have simply reached a tipping point and it’s time that policymakers understand why. “I know lives have been saved” by prescription medications, she said. “But I can’t stand by as these needed medications become out of range for people who need them.”

The transparency bills are only the latest front in states’ attempts to deal with high medication prices. Before this year’s legislative session, at least seven states had capped the amount insurance companies could require patients to pay out-of-pocket for biologics, a class of extremely complex and usually expensive medicines made from organic materials that are most commonly prescribed for certain cancers and auto-immune and nervous system disorders.

The bills around the country are not all the same, and they are likely to change as they move through the legislative process. Most contain some kind of price trigger that would require drugmakers to disclose information about cost. For example, Ginal’s bill would only affect drugs that are priced above $50,000 for a course of treatment or annual supply. Although lawmakers, regulators and consumers would have access to the information, the drug would not be subject to any further government action, such as price setting, under her bill.

“What we need to do is look at why the prices are as high as they are, and I believe without that consumers and policymakers are unable to enter into a discussion about pricing,” Ginal said.

But under Montigny’s bill in Massachusetts, if regulators found that the price set by a manufacturer was unjustified, they could set a maximum allowable price for that drug in the state. (The measures to be used to assess the price have not yet been developed.)

Montigny doesn’t mince words when speaking about the pharmaceutical industry. Other parts of the health care system, such as hospitals, must explain how they set their prices, and there’s no reason drugmakers should stand apart, he said. “Why should everyone else be in the spotlight in health care but them?”

Some experts in drug pricing who are sympathetic to the goals of the transparency bills are dubious that they will accomplish what their sponsors hope.

“There is a problem in trying to attack the problem this way,” said Kenneth Kaitin, director of the Tufts Center for the Study of Drug Development.

It would be difficult for drugmakers to supply cost information because many of their products are the result of mergers, acquisitions and partnerships, Kaitin said. As for the information that is available, he said even an accountant would find it hard to understand, let alone a lawmaker or a regulator. The proposed bills would seek information about government subsidies and the costs of clinical trials, patent acquisition, advertising, manufacturing and distribution.

Beyond that, Kaitin agrees with industry officials that the cost associated with research and development, manufacturing and marketing are not really relevant to the price drugmakers charge.

“My fear is a lot of energy and emotion is tied up in these proposals to get at drug pricing and in the end it’s just not going to make a difference,” Kaitin said.

But Kaitin said the bills may accomplish something else.

By talking about pricing and transparency, Kaitin said, lawmakers may pressure the industry into talking with policymakers, health plans and others with a stake in health care about “how to make sure tomorrow’s breakthrough drugs are affordable and accessible to the patients who need them.”