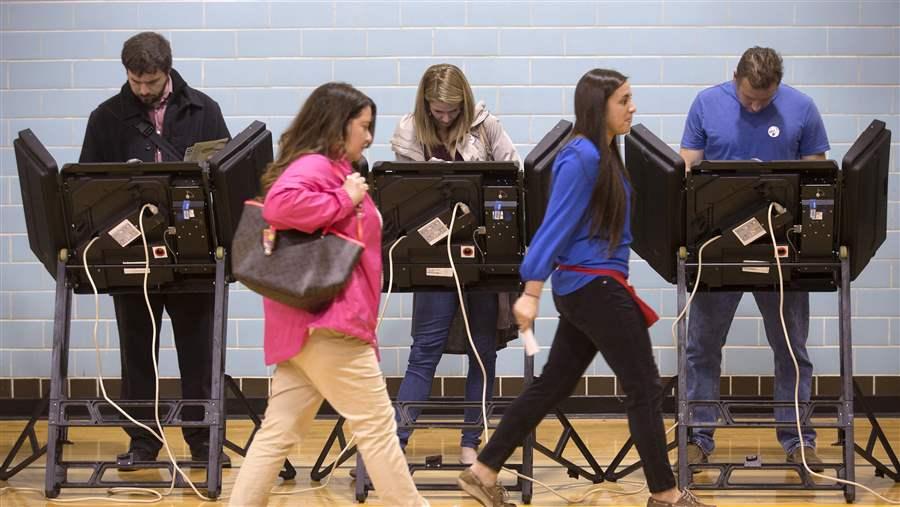 A poll worker leads a voter to an electronic voting machine in Columbus, Ohio. Many computerized voting machines are reaching the end of their life span and governments must figure out what to replace them with and how to pay for it.

This year, as Americans select the next president, the entire U.S. House of Representatives and a third of the Senate, as well as an array of state and local officials, many voters will cast ballots on a generation of electronic voting machines that is nearing extinction.

Most of the machines, adopted by local governments after “hanging chads” left the 2000 presidential election in the balance for weeks, are at least a decade old. And they create a perilous situation: an equipment breakdown on Election Day could mean long lines, potentially leaving some people unable to vote.

But replacing the old machines with newer models is costly. The latest computerized machines typically cost between $2,500 and $3,000 each, and election boards should budget for one machine per 250 to 300 registered voters, according to the National Conference of State Legislatures (NCSL).

That high cost is just one reason the computerized machines, which record ballots via a touch-screen, push-button or dial mechanism, have been falling out of favor with cash-strapped local governments. Some elections officials and lawmakers also worry the machines could be hacked and lead to voter fraud.

Some states are already turning to other approaches. This year Maryland voters will cast paper ballots that can be scanned by machines. Optical scanners that read paper ballots cost up to $5,000, but only one is needed per polling location, making them a cheaper approach than computerized voting machines. In Virginia, officials have ditched most of their voting machines in favor a similar system, and legislation before the General Assembly would get rid of all voting machines in the state by 2018.

In New Hampshire, a proposal would create a municipal grant program to support local governments that want to change their election procedures, and lawmakers in Ohio put a provision in the state budget to save money by eliminating certain special elections.

About 25 percent of voters will use electronic voting systems this year, said Pamela Smith, president of Verified Voting, a nonprofit focused on ballot accuracy. That’s down from 30 to 40 percent when the machines were more popular.

In most states, those machines are at least 10 years old, an age at which most reach the end of their life span, according to a report from the Brennan Center for Justice. Nearly every state is using machines that are no longer manufactured.

Jurisdictions have to “make sure they have good emergency provisions in place,” Smith said. “If you have a good paper ballot and scanner system in place as your voting system, even if your scanner breaks down, voters can still vote.”

State and local governments first began to buy computer voting machines in the early 2000s under the federal Help America Vote Act. Some states still have HAVA money on hand, but additional federal help is not expected and many governments have trouble paying for new election equipment — typically from a combination of state and local coffers.

Election funding often butts against the need to pay for more in-demand priorities like schools and roads, said Colorado Secretary of State Wayne Williams, a Republican.

“You can’t wait for it to break to fix it,” he said. “You can wait for a road to have issues to fix it, but if you wait to do that in an election, it’s too late.”

Across the country, officials in at least 31 states want to purchase new voting machines within five years, but at least 22 of them don’t know where the money will come from, according to the Brennan Center report.

The Center estimates the total national cost of replacing existing machines could exceed $1 billion. The country’s largest jurisdiction, Los Angeles County, has allocated $70 million to design and develop its own voting system for the 5 million registered voters who live there. County officials are pursuing a system that will allow voters to cast ballots on a touch-screen device that would issue a printed ballot that they would place in a ballot box to be counted.

But other county and local governments will have to get by with existing equipment because many states have cut their election budgets in recent years. In 2014, Virginia lawmakers stripped $28 million from the state budget that was intended to pay for new voting machines.

In Utah, Republican Rep. Brad Daw is pushing legislation that would replace the state’s aging computer-based machines. His proposal would set up a selection committee to recommend voting equipment and help counties pay for the machines if they choose to use the state-selected brand.

Daw, who is also a software engineer, said he’s never been a fan of the state’s computer voting machines — they require a lot of equipment and their operating systems are easy to hack, he said.

Opponents of the machines also say they create long lines as voters have a hard time figuring out how to use them; they are prone to crashes as the software ages; and they are vulnerable to attack. A 2014 analysis of Virginia’s computerized voting machines found that hackers could access the wireless networks the machines ran on to view or change votes.

A system by which voters mark paper ballots that are scanned by machine could be a better option, Daw said.

As the computer models fade out, most jurisdictions are replacing them with the scanner systems, which are more affordable and were recommended by experts following the 2000 presidential election. But, the high-tech (for the time) computer systems were more attractive, Smith said, because “nobody wanted to be the next Florida.”

To save on election costs, a few states have turned to voting by mail.

Oregon, Washington and Colorado require that all elections be conducted by mailed ballots, though many others permit localities to conduct mail-in special elections. California, Hawaii and Oklahoma are also considering mail-in systems.

In Oregon, the first state to adopt a mail-in process, in 2000, all eligible voters are mailed a ballot, which can be mailed back to the election board, completed in person at a county clerk’s office or placed in a public drop box. People with disabilities are able to vote on machines at a clerk’s office.

The ballots are examined by election board workers who verify voters’ signatures and then pass them through scanners that tabulate results.

Phil Keisling, Oregon’s former secretary of state who is credited with pioneering the vote-by-mail program, said it not only saves money — an estimated $3 million per election cycle in Oregon — by reducing the number of polling places and machines required to hold an election, but also increases turnout.

During the 2012 presidential election, 64.2 percent of voters cast ballots in Oregon, compared with a national voter turnout of 58.6 percent.

In the last four general elections, 40 percent of Oregon voters returned their ballots by mail and roughly 56 percent returned them via public drop boxes, said Jim Williams, elections director for the Oregon secretary of state. The remaining ballots were cast by walk-in voters.

Last year, San Mateo County, California, held its first mail-in special election, garnering a nearly 30 percent voter turnout, almost five percentage points higher than a similar election two years earlier. Only 2.5 percent of ballots were cast at a precinct or voting center in the 2015 election, down from 24 percent in 2013.

While Oregon has had success as the first state to move to a mail-in system, few others are interested, Keisling said.

Some states are resistant to mail-in ballots simply because they buck tradition, said Wendy Underhill of NCSL.

“Cost is one consideration,” Underhill said. “But it is by no means the only consideration. [Mail-in voting] does change the feel of Election Day. That’s not a small consideration.”