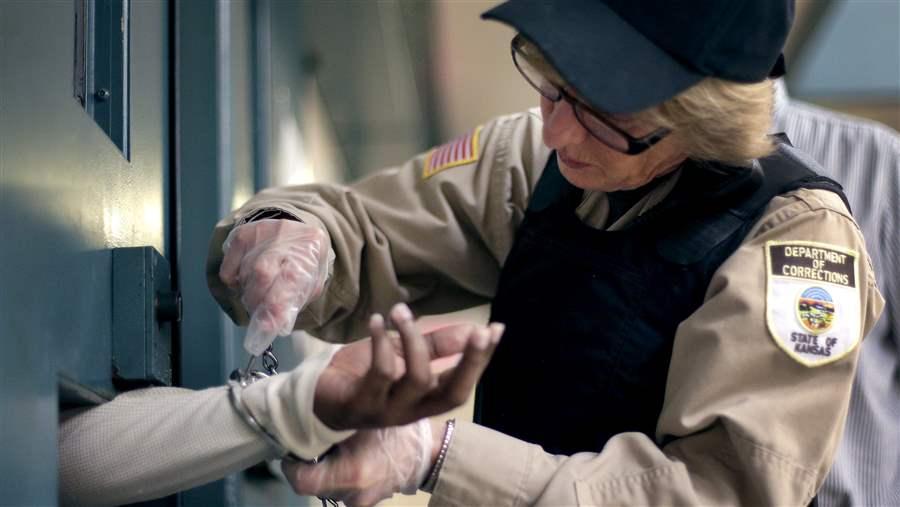 Kansas correctional officer Cynthia Miller handcuffs an inmate at the Ellsworth Correctional Facility. Kansas is one of several states facing high vacancy and turnover rates in its prison staff.

In David Sanchez’s nightmares, he’s back in the ravaged New Mexico Penitentiary after one of the deadliest prison riots in U.S. history, the smell of burnt flesh permeating the air. Thirty-three inmates died in the February 1980 riot, hundreds of others were injured, and seven guards were beaten or raped.

Sanchez, a guard at the time and a state prison administrator until last year, is haunted by what can happen when a prison is overcrowded and understaffed. He looks warily today at New Mexico’s prisons, where Corrections Secretary Gregg Marcantel says the staffing level is at a breaking point.

“It’s very unsafe,” Sanchez said. “The officers … are fatigued, they are exhausted. They are on edge.”

New Mexico is one of several states — including Kansas, Nebraska, Michigan, Missouri and West Virginia — trying to solve a dire shortage and high turnover in state correctional officers this year by proposing pay increases or starting new training academies. The proposals are similar to what Idaho, North Carolina, Texas and Oklahoma did last year to try to attract and retain prison guards.

It’s important the states find a solution, say state officials and lawmakers, union representatives and analysts. Understaffed prisons result in long hours, fatigue and stress for guards, and canceled recreational and social programs for inmates, such as family visits — all of which can lead to potentially dangerous situations.

“If we don’t have enough staff, and if the staff we have is young and unexperienced, and they are disproportionately overworked because they are understaffed — that combination is a recipe for, if not disaster, then for a serious dangerous incident,” said Kansas state Rep. John Rubin, a Republican.

Although no studies have definitively linked understaffed prisons to an increase in assaults, riots or escapes, union representatives Miles Conway of New Mexico’s branch of the American Federation of State, County and Municipal Employees and Mike Marvin of the Nebraska branch, say their officers know it creates unsafe conditions.

The staffing shortages are occurring as most prison populations are rising, even when many states are looking to reduce sentences for minor offenses or provide alternatives to prison.

Twenty-eight of the 34 states that provided projections to The Pew Charitable Trusts in 2014 expected their state prison populations to grow by 2018, from 1 to 16 percent (Pew also funds Stateline).

Many prisons already are full or overcrowded. New Mexico, for instance, is at 98 percent of capacity. At the same time, one in three officer jobs is open. In the two most understaffed prisons, half the jobs are open. With starting pay of $13.65 an hour and little chance of a raise, most New Mexico officers leave within three years.

Union representatives protested outside the state Capitol last month, asking the Legislature to boost salaries. Republican Gov. Susana Martinez’s proposed budget, released in January, would increase funding to corrections by $12 million — part of which Marcantel said would probably go to boosting starting salaries in corrections, but won’t help much with retention or with maintaining programs designed to deter recidivism and stem the growing inmate population.

“When we’re relegated to staffing levels in which we are stretching ourselves just to maintain the safety and security of our operating environment, then the other things that are very, very important to reducing recidivism have to be set aside,” he said.

An improving economy has exacerbated the prison staffing problem in some states: job seekers can more easily find better-paying, lower-stress jobs. And the person who wants to stay in the corrections field can find better pay in county jails or federal penitentiaries.

In Kansas, where starting officer pay is $13.61 an hour, the unemployment rate is low, at 4 percent in December. The state’s turnover rate for correctional officers has been increasing since 2010, when 20.8 percent of staff left. Last year, 29.7 percent did.

Guards at Lansing Correctional Facility, a medium and maximum security prison in northeast Kansas, don’t need to look far if they’re seeking a better-paying prison job. The federal medium-security prison at Leavenworth is in the same county.

In 2015, two inmates at Kansas’ second-largest state prison battered three officers. Later that year, the state Department of Corrections told employees they would see their pay raise to $14.30 an hour if they stuck around for a year. Officers had been getting a raise after three years, said Adam Pfannenstiel, the department’s communications director.

In addition, in February, lawmakers sent Republican Gov. Sam Brownback a budget bill that would provide a 2.5 percent pay raise.

In Nebraska, where starting prison guard pay is $15.49 an hour, the story is similar. Unemployment was 2.9 percent in December. Turnover has been on the rise from 18.5 percent in 2010 to 30.8 percent last year, when an average of about 8 percent of the 1,300 officer positions were vacant.

A riot in May at one of the state’s maximum security prisons in which two inmates were killed drew attention to the staffing problem. Doug Koebernick, the state’s new inspector general for its prisons, said employees tell him that low pay and a lack of raises is discouraging — especially when they could make more working at a county jail. The Lancaster County Jail, an hour away from the prison where the rioting occurred, pays $17.85 an hour, $2 more an hour than the state’s starting wage.

Koebernick said the Nebraska Department of Correctional Services is seeking to improve the work environment. The state’s use of mandatory overtime, in which an employee working an eight-hour shift may be required to stay on duty for another eight-hour shift, has been cut nearly in half.

State Sen. Dan Watermeier, a Republican, introduced a bill this year that would put more money into prison staffing, giving the department $2.5 million to be spent on anything to do with recruiting and retaining guards, with the hopes it will help with recidivism.

“You’re going to have longer-term case workers, with a stable work environment for them,” he said. “They know the system. They know the end goal is to keep those inmates out.”

In a 2014 survey of correctional officers — with 592 respondents from 44 states — the nonprofit Desert Waters Correctional Outreach found that 20 percent of them had high levels of “corrections fatigue,” feeling stressed and unsupported.

Caterina Spinaris, founder of the organization that studies officer well-being and trains officers on how to stay healthy and alert, said that if prison administrators don’t acknowledge the deteriorating health of their guards, they will pay for it in the long run.

Guards experiencing a high level of fatigue take an average of 10 sick days a year, she said; those who aren’t take five days. In a prison system with 1,000 guards that pays an average wage of $15 an hour, the annual cost of lost productivity for those additional sick days would be $406,778.40, according to a calculator on the organization’s website.

The cost of overtime also pushes up corrections department budgets. In many states seeking solutions, officers are working 12 to 36 hours overtime a week — some of it mandatory.

Administrators can fight fatigue, Spinaris said, by reducing overtime, seeing that guards get support from leaders and co-workers, and providing training on how to handle stress, be resilient and not take shortcuts.

To try to give his overworked officers a break in New Mexico, Marcantel last month began eliminating social programs for inmates a week out of every month so that guards can work less. It didn’t go over well. Inmates began to stir on the second day of the new program, causing what the correctional officers’ union characterized a near riot.

Although Marcantel said he thought officers overstated what happened, it reminded him to listen to his staff’s concerns. He realizes the situation is dire — that’s why he is constantly asking for more resources.

“We cannot fall asleep on the job here,” he said. “Even though we are better trained and our prisons are safe right now, we cannot sustain these vacancy levels.”