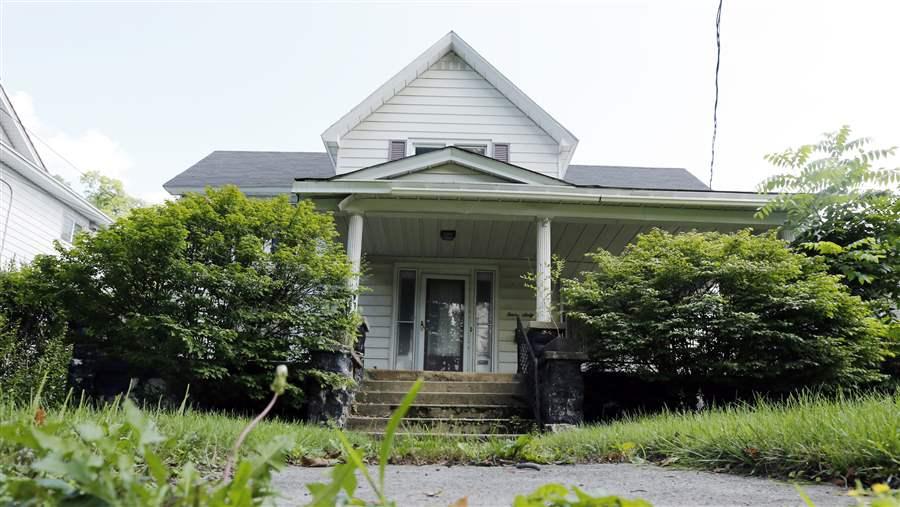 The number of vacant “zombie” houses, like this one in Amsterdam, New York, is on the rise in several states eight years after the nation’s housing crash.

MASTIC BEACH, New York — They call it “The Matrix,” a well-thumbed pile of maps locked in a cabinet at Village Hall that pinpoints all the empty “zombie houses” in this 4.2-square-mile seaside community. There’s one on nearly every block.

“It’s like a cancer,” Mayor Maura Spery said of the scourge. “It’s not getting any better. Each one of these is hurting property values for six or seven houses around it. Who wants to live in a place with so many vacant houses?”

The vacant properties are called zombie houses because their ownership is in limbo: mortgage holders have already left, but banks haven’t yet taken possession through foreclosure, leaving the properties abandoned and often decaying.

A relic of the Great Recession, zombie houses have receded in many states — but not all. They remain, and are growing in number in several states, including here in New York and in nearby New Jersey and Massachusetts, which together account for 40 percent of the nation’s vacant foreclosures. Over the last year, the number of zombie houses also has risen in Oklahoma, Michigan and Washington.

State and local officials like Spery are tired of them and demanding or taking action, saying the public cost of trying to maintain the vacant houses is unacceptable and they are driving down the value of neighboring property.

In New York, a group of mayors are pushing a proposal introduced by Democratic Attorney General Eric Schneiderman that would require banks to take responsibility for maintenance as soon as a house is vacant, so they can’t avoid responsibility by postponing foreclosure.

This month, Schneiderman announced a $3.2 billion settlement with Morgan Stanley, part of which will go to local governments to help offset the costs of dealing with the properties.

In Memphis, Tennessee, neighbors can now collect a $25 credit toward eventually buying a home each time they cut the grass at an abandoned property under a “mow to own” program. It’s an approach that’s also been used in St. Louis; Columbus, Ohio; and Rockford, Illinois.

In New Jersey, which has more than 4,000 zombies, the most of any state, lenders by law must notify local governments if a property becomes vacant before foreclosure is finished, and be available to help with repairs and maintenance. The law allows towns to fine lenders up to $2,500 a day if they don’t comply.

If states or communities fail to act, New York’s Schneiderman makes it clear what can happen: “Abandoned homes become magnets for crime, drag down property values and drain municipal coffers.”

As the nation’s housing market has improved, the number of zombie houses declined from 46,715 in 2013 to 19,793 by the start of this year, the real estate information company RealtyTrac estimates. That’s a 58 percent drop.

Entering the year, Suffolk County, New York, where Mastic Beach is located, has the highest number of zombies in the country at 625, followed by Camden, New Jersey, at 596, according to RealtyTrac, which bases its estimates on matching houses in foreclosure with vacancies reported by the U.S. Postal Service.

“It’s improving nationally but becoming more concentrated in some areas,” said Julia Gordon, executive vice president at The National Community Stabilization Trust, a nonprofit that works with local government to free up zombies and other troubled properties for use as affordable housing.

Daren Blomquist, vice president at RealtyTrac, cautions that his firm’s estimates may understate the problem, especially in some states — New Jersey and New York among them — where laws demand lengthy court-supervised foreclosure procedures designed to help protect property owners.

A Seton Hall Law School study in 2014 found that New Jersey’s system of court-supervised foreclosure “has not worked efficiently” since the housing bust in 2008, contributing to backlogs and abandoned housing.

Massachusetts has a shorter foreclosure process in theory. But in practice, it became much more difficult after a 2011 court ruling that required extra paperwork. A state law signed last month is designed to streamline the process again.

Many advocates for property owners say foreclosure delays often are caused by banks or contracted loan servicers that deliberately back out of proceedings before taking possession to avoid legal responsibility for maintaining the property.

“In most cases the delays in going forward with a foreclosure on a vacant property are caused by the banks themselves,” concluded the Empire Justice Center, a nonprofit New York law firm, in a report last year analyzing five years of foreclosures in Rochester.

As of late last year, according to association economist Joel Kan, nearly 3 percent of loans were in the foreclosure process in states with court-supervised foreclosure laws, compared to 1 percent for other states.

Richard Simon, of Bank of America, said foreclosure delays are common in a state like New York because of the lengthy process. But, he said, it’s never in the bank’s financial interest to step back from foreclosure to avoid responsibility for a property.

“Extended foreclosure and property preservation are quite expensive and only add to the large financial losses already being absorbed in most foreclosures,” Simon said.

But Peter Skillern, director of Reinvestment Partners, a North Carolina nonprofit that advocates for fairer lending in poor communities, pointed to another possibility. “Sometimes the reality is that these banks have thousands of these houses and they really don’t know what to do.”

The New York proposal has not progressed in the House or the Senate since being introduced in 2013. But the New York Conference of Mayors continues to press for the legislation, calling vacant and abandoned properties “an epidemic in New York’s cities and villages” in a February memo on the bill.

At its winter legislative meeting, the mayors’ group offered training on dealing with abandoned properties, and its 2016 Legislative Program calls for even more reforms, such as allowing local governments to force foreclosure for zombies.

The mayors’ concerns were underscored in a January report by Mount Vernon (New York) Mayor Richard Thomas, which said that vacant houses in Westchester County had cost neighboring homes $9.2 million in property value, and generated hundreds of complaints and code violations.

In addition to forcing banks to take responsibility for maintaining vacant houses, the New York proposal would establish a hotline for residents to report vacancies. It would require banks to notify homeowners that New York law permits them to stay in their homes until ordered to leave by a judge.

The argument is the presence of the original owner would help prevent decay of the property, while making it easier to establish ownership so a loan could be restructured or the property sold in a short sale. “It would be so much easier to negotiate if the owners were still there,” said Gordon of the Stabilization Trust.

Homeowners are often shocked to find out that they still own houses that they thought were foreclosed, and that they may even be responsible for cleanup bills, said Judith Fox, a facilitator for state foreclosure court in Indiana who is conducting a study of abandoned housing in South Bend, Indiana.

In Mastic Beach, the mayor knows many of the vacant properties by heart after working on “The Matrix” for eight months in an effort to get a handle on the problem. The Matrix’ color-coded maps use blue to mark verified vacancies, red for suspected vacancies, and yellow for squatters. Some blocks have five or six vacant properties.

She can point out a two-story house on Baker Road where squatters moved in and dealt heroin, brazenly renovating the house with new radiators. Across the village, squatters in more than 30 houses have been identified and evicted since last summer.

As Spery headed back to Village Hall on a recent afternoon, a resident stopped her to say somebody was vandalizing a boarded-up home, so she paused to call the police.

Because abandoned houses may not be obvious at a glance, neighborhood activists are an important part of any plan to keep track of them. In Mastic Beach, a committee of residents helps identify homes that need to be investigated. Some neighbors mow lawns and even park cars in the driveways of abandoned homes to keep up appearances.

Once zombies have been identified, the next step is finding somebody to take responsibility for cleanup charges. But one of the top challenges for local and state governments is gathering data about titles and foreclosures, according to a 2010 study from the U.S. Government Accountability Office.

Mastic Beach relies on county records and handwritten notes by its small staff of five part-time code enforcement officers to find out who owns mortgages at each vacant house, the name of the lender, and whether property taxes are being paid.

Reinvestment Partners, the North Carolina nonprofit, published a guide last year for neighbors and others looking to verify zombie houses and take action, including going to court to force lenders to finish foreclosing. The group has also held protests in zombie makeup and put out a music video to raise awareness and explain the issue.

Some of the most ambitious programs to combat zombie houses may be in Ohio, where Youngstown and Canton require banks to put up a $10,000 bond before foreclosing on a vacant house, to be used for upkeep should the property turn zombie.

Experimental “land banks” that can accept donated housing from banks and repurpose them for affordable housing have sprung up in Syracuse, New York, and Long Island’s Suffolk County.

Oklahoma, where the number of zombies has almost doubled in the last year to 225, passed a state law in 2014 allowing local towns to recover costs for maintaining vacant houses through tax liens.

The state law superseded an Oklahoma City ordinance that required owners of vacant properties to pay an annual fee, which was opposed by realtors who considered it unfair to investors who had vacant but well-maintained houses, said Jane Abraham, government affairs manager for the city.

The state law also allows the city to charge owners for police and fire calls to abandoned homes, services that cost the city $6.4 million a year, according to a 2013 study. Property values were $2.7 billion lower because of the zombies, the study found.

Many localities, including Mastic Beach, have also started requiring banks to register vacant properties. Failing to register carries a $2,500 fine, but the village can’t always track down a responsible party to pay the fine.

Though the village has never tallied the cost of using its employees to investigate houses, board them up, and clean up when squatters trash them, the mayor knows it’s costly and postpones other important work.

One part of the New York law would create a statewide registry, run by the attorney general’s office, and fines for failing to register would go to local governments to help pay for responding to complaints about zombies. That would be a welcome development, Spery said.

“We’re a poor village. We don’t have the resources to handle all this. We’re the poster child for this and we’re getting no help. None.”