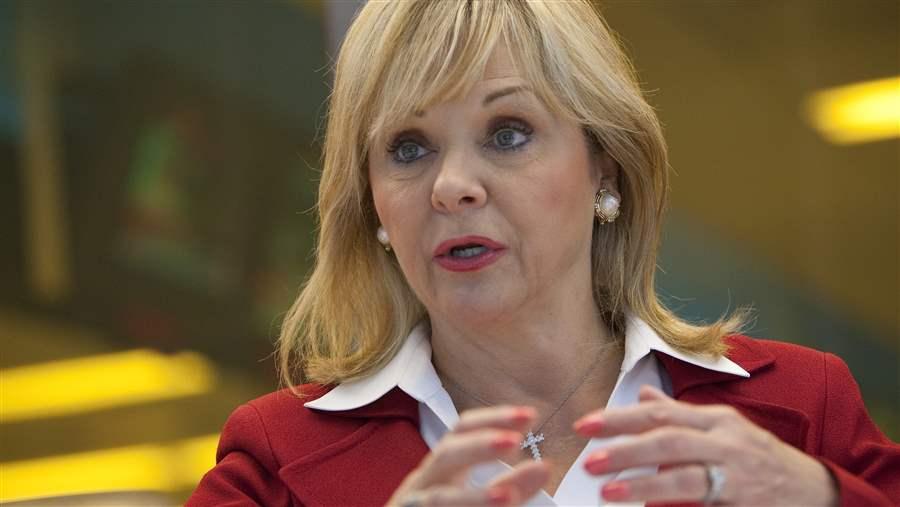 Republican Gov. Mary Fallin of Oklahoma has proposed expanding the sales tax to services that are currently exempt. Other states also are considering taxing services.

As sales tax collections slow and the nation becomes a service-based economy, many states are considering expanding the universe of goods and, especially, services that are subject to the sales tax.

For some states, expanding the sales tax is a straightforward way to get more revenue amid a budget crunch. For others, it’s a way to replace revenue lost in a political and philosophical decision to reduce personal income and corporate business taxes in an attempt to free capital to create more jobs.

Further down the line, some states are looking at taxing new or different endeavors in the face of a changing economy.

In states from Arizona to Oklahoma and West Virginia, lawmakers are considering bills that would impose the sales tax on services ranging from beauty salons to funeral homes; from telephone land lines to cellphones. In Pennsylvania, the governor’s budget calls for an expansion of the state’s sales tax — to include movie tickets, cable service and digital downloads — that he expects to raise about $415 million.

But revenue from the sales tax is slowing. According to the Rockefeller Institute’s “State Revenue Report” issued in November, sales tax collections in the second quarter of last year grew 3.2 percent from the same period in 2014 — significantly weaker growth than reported in the previous four quarters and “low by historical standards.”

The erosion is expected to continue. Shoppers now do more business online, where collecting sales taxes is less reliable. And many people are simply paying for services rather than buying the taxable goods to do the work themselves — think of hiring a lawn service as opposed to buying a mower.

And it’s coming at a time that many states have sought to reduce their reliance on personal and business income taxes because they have become overly dependent on them; revenue from them is more volatile and harder to forecast; or because they think income taxes stifle job creation.

“Over the past four or five years, there has been increasing interest in sales tax base expansion,” together with the rise in Republican state legislators, said Joseph Crosby, a principal at MultiState Associates and a former executive with the Council on State Taxation. “There is a natural, strong instinct to reduce income taxes in favor of consumption.”

There are downsides to that, however. Sales taxes tend to be regressive in that they dent the pocketbooks of lower-income families more than upper-income families with more disposable income (though taxes on services like landscaping and health clubs may hit more affluent folks). And unless the sales tax is extended to all goods and services, it plays favorites on whom and what gets taxed.

If legislators exempt some services — such as health care and educational services — from the tax, as they tend to do, Crosby said, then the tax base is undermined. And, he said, a question of fairness arises.

Some states, such as Oklahoma, are considering sales tax expansion out of dire necessity.

To help close a projected $1.3 billion budget deficit in fiscal 2017, largely resulting from tumbling oil prices and exacerbated by a cut in personal income taxes that took effect this year, Republican Gov. Mary Fallin proposed a $200 million expansion of the state sales and use tax. She hasn’t enumerated specific services to be taxed, but has left no doubt that taxing services will need to be evaluated.

“If you never looked at any of your sales tax exemptions, particularly in a service economy, it makes sense to look at that,” Fallin said, adding that there are probably some “antiquated exemptions put on 50 or 60 years ago.”

Ultimately, Fallin said, she’d like to lower Oklahoma’s sales tax rate of 4.5 percent if its base can be expanded enough. But she doesn’t underestimate the political difficulty in expanding it to cover currently untaxed goods or services. “It’s hard to move the old dinosaurs.”

Other states also are driven to look at expanding the sales tax by dire finances.

In Louisiana, faced with a budget deficit of at least $870 million this year and projected at $2.2 billion in fiscal 2017, Democratic Gov. John Bel Edwards has proposed a 1 cent hike in the 4 percent sales tax rate. He would also extend the sales tax to Internet sales; lodging booked through online travel companies; and personal home rental services such as Airbnb.

Democratic Gov. Gov. Tom Wolf’s proposal to expand Pennsylvania’s 6 percent sales tax comes as he and the Legislature try to come to grips with a deficit that is expected to surpass $500 million this fiscal year and to balloon to $2 billion the next.

Lawmakers in other states are eyeing a sales tax expansion as a way to pay for cuts in income taxes.

A bill in the Arizona House, for instance, would lower personal income tax rates and make up the lost revenue by broadening the sales tax base to a laundry list of services: beauty salon services, funeral homes, dry cleaners, shoe repair, carpet cleaning, pet grooming and boarding, parking, and cleaning and repair services.

North Carolina has made the trade-off already, and Republican Gov. Pat McCrory said it has been an economic success.

In 2013, he signed a bill that cut North Carolina’s personal income tax rate from 6 to 5.8 percent and cut business taxes from 6.9 to 6 percent. In 2015, while the state built on that plan and cut other taxes, it added insulation repair and maintenance to the list of services subject to the sales tax.

According to the Tax Foundation, tax revenue in North Carolina exceeded projections by $400 million in 2015. Unemployment dropped, although a direct correlation is often hard to track and can be attributed to the improving economy nationally.

McCrory, however, has no doubt about the results: “Our income tax revenue has increased by 5 percent this year, and our job creation has been the best in the nation. There’s a direct correlation. You could keep doing the same thing and get the same result, or you could try something new.”

California’s budget situation could not be more different from Oklahoma’s. Gov. Jerry Brown’s proposed budget estimates more than $10 billion in reserves by the end of fiscal 2017, and the debate is mostly over whether to spend or save the extra cash.

But a leading member of the Legislature says now may be a good time to look at restructuring the state’s tax system, including shifting the sales tax structure, precisely because the state is not cash-strapped and can evaluate proposals without the deficit sword hanging over its head.

Democratic state Sen. Robert Hertzberg, a former speaker of the California Assembly, is preparing legislation that would add services to the sales tax base as part of a larger tax restructuring package. Although he is still working out the details, his plan is similar to legislation that he introduced last year and did not pass. That bill called for extending the sales tax to services, without specifying which ones.

Hertzberg wants to cover services because they comprise an increasing share of the economy. He acknowledges sales taxes can be regressive, but said they can be less so by exempting rent, utilities, education, child care and health care.

“You have to make the rate low enough so it doesn’t have that much effect on poor people,” he said.

Brown, a Democrat, who has not taken a position on Hertzberg’s reform efforts, has called for putting more money into California’s rainy day fund to guard against revenue volatility and the likelihood of another recession.

Six states — Delaware, Hawaii, New Mexico, South Dakota, Washington and West Virginia — tax services broadly. And some, such as South Dakota, have for many years. But even in those states, there are routine calls for exemptions.

Republican Gov. Dennis Daugaard, who is seeking a half-cent increase in South Dakota’s 4-cents-on-the-dollar sales tax to pay for teachers’ salaries this year, recently wrote an op-ed column opposing lobbyists who each year “argue for a tax exemption on their particular goods or services.”

Daugaard vetoed an effort last year to exempt hay for livestock bedding. And he vowed to oppose efforts this year to exempt rodeo admissions and used truck tires.

Elsewhere in the country, advocates lay out many reasons they want exemptions.

For example, legislatures in four states — California, Michigan, Virginia and Wisconsin — are considering bills to lift the sales tax on all feminine hygiene products, including tampons. Backers say the goods are “essential” by any definition and should not be taxed by states that have exempted other essentials such as groceries. (A similar bill has already failed in Utah. Five states — Maryland, Massachusetts, Minnesota, New Jersey and Pennsylvania — exempt tampons from tax.)

Other states are dealing with other proposed exemptions: The Idaho House has approved a bill taking sales taxes off Girl Scout Cookies, Boy Scout popcorn and other food products sold by the scouts. And Georgia is considering removing its sales tax from Super Bowl tickets as an incentive to bring the NFL’s big game to Atlanta in 2019 or 2020. The NFL will choose the sites in May from among Atlanta, Miami, New Orleans and Tampa.