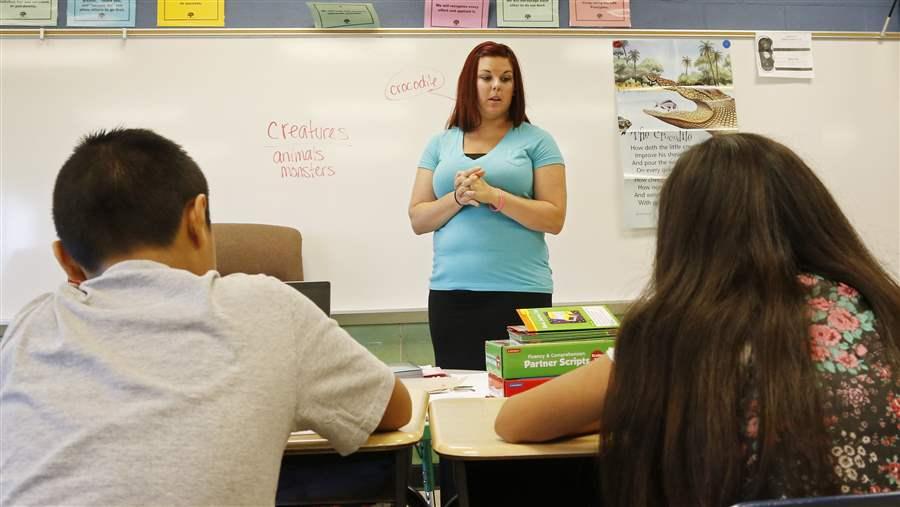 Kelci Gouge teaches third-graders at a summer reading academy in Oklahoma City. Oklahoma is one of several states grappling with a severe teacher shortage.

Prairie View Elementary School doesn’t usually have trouble attracting new teachers. It’s one of the more affluent schools in rural Enid, Oklahoma, housed in the district’s newest building, which looks out on to wheat fields.

“When I started having trouble hiring teachers — I can only imagine what the other principals are doing,” said Prairie View’s principal, Clark Koepping.

Schools nationwide are reporting teacher shortages that go beyond the chronic struggle to fill positions at low-income schools and in subjects such as science and special education. Oklahoma, where education funding has been slashed, may be the hardest hit state.

Like many of her counterparts, Republican Gov. Mary Fallin has focused on one solution: giving teachers a raise. Her latest budget proposal finds money for teacher pay increases despite declining revenue and a projected $1.3 billion deficit for fiscal 2017.

Raising teacher pay is a simple policy lever for lawmakers to pull — most states have increased K-12 spending in recent years, including spending on teacher compensation. But there are other things states can do to close the gap, such as establishing residency programs, akin to those for young doctors, to give new teachers more support.

“The solution is to improve the job,” said Richard Ingersoll, a professor at the University of Pennsylvania Graduate School of Education. Some approaches, such as raising teacher salaries and reducing class sizes, cost a lot of money. Others, such as giving teachers a bigger role in how classrooms are run, do not.

Is Low Pay a Driving Factor?

When this school year started, about 1,000 teaching positions across Oklahoma weren’t yet filled. Schools there have canceled courses, crammed more children into classrooms, and hired more teachers on emergency licenses as the shortage has worsened over the past few years.

To Shawn Hime, head of the Oklahoma State School Boards Association, the reason is clear: Oklahoma teachers haven’t had a pay raise since 2008. Oklahoma teachers new to the profession earn about $31,600 a year, less than they could earn in cities in neighboring states.

Although $31,600 is higher than the average private sector salary for a new college graduate in Oklahoma, after 10 years private sector workers earn 37 percent more than teachers do, according to an analysis commissioned by the School Boards Association and the Oklahoma Business and Education Coalition.

Fallin’s budget would spend $178 million to raise every teacher’s salary by $3,000. “The education of our students remains my biggest priority in my budget, even in fiscal climates like this,” she said in her State of the State address this month.

State legislators have put forward their own proposals for raising teacher pay. Meanwhile, David Boren, president of the University of Oklahoma and a former Democratic governor and U.S. senator, is leading a drive for a ballot initiative that would raise money for schools (including teacher salaries) through a $0.01 sales tax increase.

Many Oklahoma teachers are already eligible for additional compensation, in the form of federal loan forgiveness for working in a designated shortage area. Last year, the Legislature passed bills that allow districts to offer one-time bonus payments to attract rookie teachers.

A Broader Focus on Recruitment and Retention

Low pay may not be Oklahoma’s only problem, however. Teacher shortages involve many factors, including teacher retirements, a growing school-age population, and efforts to reduce class sizes. Educators, advocates and researchers nationwide have different theories about why schools may have trouble recruiting qualified teachers.

Koepping, the elementary school principal, said he thinks there’s a supply problem: Fewer young people are getting bachelor’s degrees in education. Nationally, college education programs are producing fewer graduates than they used to, and it’s not clear why.

But Ingersoll says that focusing on college graduates misses the point. Public schools hire teachers of all ages, including people who enter the profession through an alternate route, such as the Teach for America program. In any case, students will return to education programs once the economy improves and teacher hiring picks up, he said.

“The problem isn’t shortages, so much as it is too much turnover,” he said. The latest federal survey data shows that 17 percent of new teachers leave the profession in five years or less.

New teachers are more likely to stay in the profession if they’re connected with mentors and additional training, Ingersoll said. As of 2012, a majority of states required such a program; Oklahoma suspended its statewide mentoring program in 2010 but reinstated it in 2014.

In California, a Senate bill would put a twist on the idea by giving money to districts, counties and charter school operators to establish a residency program for trainee teachers working toward their teaching credentials.

Lawmakers also are removing regulatory barriers that keep out some qualified teachers. In Oklahoma, a 2015 law made it easier for teachers certified elsewhere to work in the state. Lawmakers are considering a bill that would allow retired teachers to return to the classroom and earn $18,000 a year without losing their retirement benefits.

Lawmakers can also consider scaling back the bureaucratic rules and paperwork that teachers find frustrating once they’re in the classroom. The latest federal K-12 education law, which gives states more control over their schools, could provide an opportunity for rethinking requirements placed on teachers, Hime said.

Schools and districts can also take steps to address local teacher shortages. Enid matched new teachers with mentors even when the state didn’t require it. The high school offers a teaching career training course. A partnership with a local university helps get student teachers into Enid’s pre-K classrooms.

But all those efforts are up against years of education funding cuts. Since 2008, Oklahoma has cut per-pupil education funding by 24 percent, the deepest reduction in the country, according to the Center on Budget and Policy Priorities.

The Enid school district anticipates a 15 to 18 percent reduction this year, and eliminated 20 positions last year to get ready. “The crisis that we’re facing is so large — it’s hard to be prepared for it,” Fitzgerald said.

With schools under so much stress, teacher salary increases aren’t enough, education advocates say. The ballot initiative in Oklahoma would create a constitutionally protected education fund for schools, higher education, career education and early childhood education. According to organizers, the proposal would raise about $615 million per year.

Oklahoma lawmakers have to find a way to protect education funding and deal with teacher pay, Holt said. “If we don’t figure out this issue this year, even with the budget shortfall, I think Republicans will pay a political price — and deservedly so.”