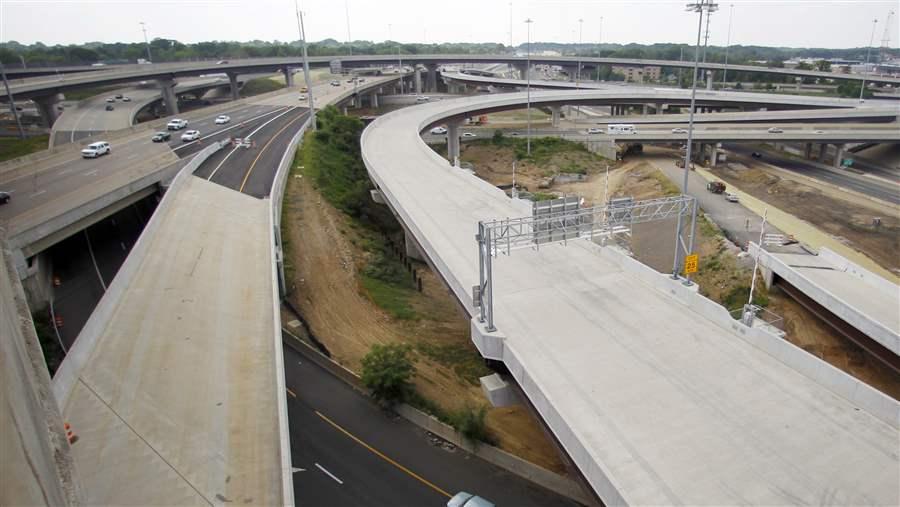 Newly built roads in Fairfax County. Virginia and other states are trying new ways to cut down on costly transportation project delays.

By Katherine Barrett and Richard Greene

Once it’s done, the 52-mile Northern Beltline in central Alabama will allow interstate travelers to avoid Birmingham traffic. But the $5.3-billion project has been controversial since planning began in the late 1980s.

Supporters say the project is essential to the state’s economy, while opponents decry its environmental impact. But Beltline boosters and critics agree on one thing: The project is taking a long, long time.

A road like the Beltline typically would take 15-20 years to build, according to Ronnie Baldwin, the recently retired chief engineer for the Alabama Department of Transportation. But the Federal Highway Administration recently predicted it won’t be finished until 2054 — six years later than was projected two years ago, and 65 years after funds were earmarked for a project feasibility study in 1989. So far, work has begun on less than 2 miles of the highway.

Baldwin realizes he’s not likely to live to see the project completed. “I’m 63 right now,” he said. “There are a lot of things that will happen when I’m up in heaven.”

The Alabama road is an extreme example of a common problem: Transportation projects often are completed years or even decades late. The reasons range from environmental lawsuits and bureaucratic wrangling to recalcitrant property owners and combative utility companies.

Some states, recognizing the economic and environmental costs of such delays, are starting to use financial incentives, heightened public scrutiny and “design-build” strategies to increase the likelihood that projects will come in on time and on budget.

Each year, the Federal Highway Administration updates Congress on transportation projects that cost more than $500 million. Most, but not all, use federal funding. There are 101 active projects on the latest list. Of the 57 projects with completion dates that were set before 2013, 25 are behind schedule by a year or more.

Generally speaking, the longer a project drags on, the bigger the price tag. More money is spent on contracting costs, machinery, staff time, rent and fuel. Inflation takes a toll, as does the need to pay for temporary repairs to existing routes.

There are costs to the local economy, when ongoing construction makes it more difficult for commuters to get to work and prevents businesses from delivering goods and services. The environmental impact is also significant: When construction makes traffic worse, it adds to air pollution. Stopping and starting burns fuel at a higher rate than driving on the open highway, boosting emissions.

Moreover, with a delayed project, “you delay the benefit the project was supposed to deliver,” said Bill Reinhardt, editor of a monthly newsletter called Public Works Financing. “If the project was supposed to be delivered in 2012 and it isn’t delivered until 2022, then you delay all that economic benefit, the lifestyle benefit and the employment benefit. If you don’t deliver the public good, the public suffers.”

Some states are pursuing various strategies to avoid such pitfalls. One is simply to require that transportation officials provide regular — and public — progress reports.

The Florida Transportation Commission produces quarterly reviews of Transportation Department spending and annual progress reports on ongoing projects. The commission has been overseeing the transportation agency since the late 1980s, but advances in information technology have allowed it to sharpen its focus. In the late 1990s, Florida transportation projects took on average 34 percent longer than expected to complete. By 2015, the average delay was down to 7 percent.

Virginia also has been aggressive about tracking projects and making the progress reports public. The state began doing so in 2000, after it became clear it would cost more — much more — than was projected in 1994 ($350 million) to widen lanes and add new bridges and ramps to a heavily traveled interchange in Fairfax County, about 15 miles from Washington, D.C. The state increased the project budget to about $676 million in 2003, and it was completed on budget in 2007.

Many states now reward or penalize contractors depending on whether they complete a project within a set number of days. California, for example, has used incentives and penalties to accelerate the completion of projects and minimize traffic delays.

“I may pay a slight premium and that’s transparent in the contract. The time component translates to a dollar amount and that determines the working days. If they go over, there’s a penalty,” said Malcolm Dougherty, the state’s transportation chief.

A.J. de Moya, vice president of the Florida-based de Moya Group, a highway and bridge design and construction firm, has worked on many state jobs that included incentives or penalties. He says they are effective — as long as they are substantial. “The bonus has to be large enough to make it worthwhile.”

Porcari was deputy secretary of transportation during President Barack Obama’s first term and headed Maryland’s transportation agency under two governors. He said incentives are attractive to both transportation officials and contractors.

Construction creates “huge disruptions to the traveling public, and every day you can avoid that closure means less impact on people,” he said. For contractors, “if there is a significant incentive for delivering early, they’ll do all kinds of things to get that incentive payment.”

Other states are withholding any payments until the project is close to completion.

The Port Authority of New York and New Jersey will not start paying NYNJ Link Developer LLC until its $1.5 billion Goethals Bridge reconstruction project is 70 percent complete, so the firm has a clear financial interest in keeping the work on schedule. Project completion is scheduled for late 2018, and the payout to the firm will continue for the next 35 years, during which time the private company will also take care of capital maintenance.

Many states are beginning to contract with a single entity to handle both the design and construction of a project. “There’s an overlap and that’s one way to compress the schedule,” Porcari said, adding that many contractors like the strategy, which increases their risk but also their profits.

Some state officials like design-build because it eliminates strife between contractors. “Instead of everyone shooting at each other, they’re all sitting around a table,” said Dougherty of California.

In 2005, the Missouri Legislature approved design-build contracting for a road reconstruction project on 12 miles of Interstate 64 near St. Louis. Without a design-build approach, it was once estimated that the project could take up to 16 years and $675 million to complete, according to the state Department of Transportation.

A flexible and innovative design-build contract contributed to the success of the project, according to King Gee, a director at the American Association of State Highway and Transportation Officials.

In 2006, a contractor signed on to design and build the road in four years. Its fee was $420 million of the final $535 million cost of the project. The construction phase took three and a half years and it was completed for $11 million less than was budgeted.