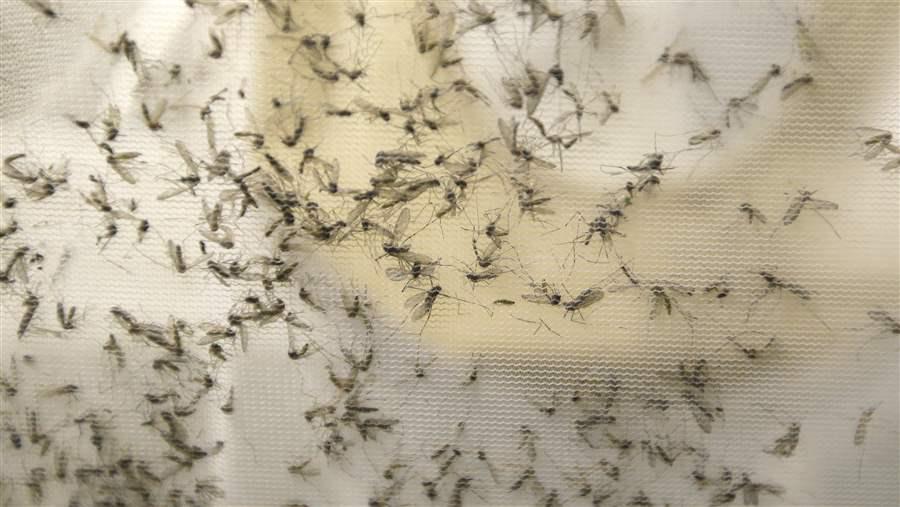 A trap holds mosquitoes at the Dallas County mosquito lab set up near the location of a confirmed Zika virus infection. Zika is the latest public health threat facing an undermanned public health system.

State health officials were heartened when President Barack Obama this month asked Congress for $1.8 billion to combat the spread of the Zika virus because they fear they don’t have the resources to fight the potentially debilitating disease on their own.

Budget cuts have left state and local health departments seriously understaffed and, officials say, in a precariously dangerous situation if the country has to face outbreaks of two or more infectious diseases — such as Zika, new strains of flu, or the West Nile and Ebola viruses — at the same time.

“We have been lucky,” said James Blumenstock of the Association of State and Territorial Health Officials, of states’ and localities’ ability to contain the flu, West Nile and Ebola threats of the last five years.

“Not only have the last major threats not been as severe as they might have been, they have also been sequential,” Blumenstock said. “The issue is: What if the next pandemic is not as mild as the last ones? What if more than one of them happens at once?”

And the trend didn’t end as the economy improved. Sixteen states reduced spending between fiscal 2013 and 2015, the two organizations said in another report. Those were the same years the nation faced Ebola, a new outbreak of West Nile, and, in 2014, widespread cases of the H3N2 flu strain.

Local health departments have suffered, too. They lost nearly 52,000 staff positions as a result of hiring freezes and budget cuts between 2008 and 2014, the National Association of County and City Health Officials reports.

“The steady reduction in public health funding has resulted in a progressive erosion of manpower and the capacity to do the kind of work that would be optimal,” said Jeff Duchin, chief medical officer in Seattle and King County. “Quite frankly, we just don’t have the staff we need.”

Health officials are confident they could contain an outbreak of the Zika virus if Congress approves the president’s request for money, which would go to eradicating the mosquitoes that spread it, research into vaccines to inoculate people against it, and public education about prevention.

As of last week, the Centers for Disease Control and Prevention reported 92 confirmed cases in the United States, including the U.S. territories. In almost every case, the patients are believed to have been infected by mosquitoes, either abroad or at home in Puerto Rico.

The mosquito that transmits the virus, the Aedes aegypti, breeds in the United States and the rest of the Americas, and is also a carrier of dengue, chikungunya and yellow fever. Scientists say that with international travel and Zika outbreaks in more than two dozen Latin American countries, it is inevitable that mosquitoes carrying Zika will surface here.

Zika poses little threat to most people, but it is potentially very dangerous for pregnant women. There is increasing evidence in Brazil — which had a virulent outbreak of Zika last spring — that the virus causes a birth defect, known as microcephaly, in which children are born with unusually small heads and brains.

A 2014 report by the Council of State and Territorial Epidemiologists found that state and local health departments are less prepared to track and contain mosquito-borne infections than at any time since the early 2000s, when they ramped up to deal with the first outbreak of another mosquito-borne illness, the West Nile virus.

Surveillance for mosquito-borne viruses other than West Nile runs from patchy to absent in the states, the report said. “In particular,” it said, “public health laboratory capacity for proactive surveillance is poor to nonexistent in most states.”

Even with West Nile, declining mosquito surveillance contributed to a new spike in cases in 2012, particularly in the Dallas area, said Jeff Engel, director of the Council of State and Territorial Epidemiologists. “We let our guard down.”

More than mosquito surveillance has suffered in the budget cuts. The Association of State and Territorial Health Officials reports that since 2008, 20 state health agencies have cut programs for sexually transmitted diseases, including AIDS, and 15 have cut laboratory services.

“Funding has been reduced for public health activities at the same time that public health threats are coming more often and more vigorously and with more intensity,” Blumenstock said.

When a new infectious disease such as Zika emerges, state and local health departments face a multitude of tasks: isolating and containing the threat; identifying people who are infected and assuring they are treated; reporting cases to the CDC; coordinating responses with hospitals and other agencies; performing necessary laboratory work; and educating the public and the medical community.

So the public may not see the effect of the budget cuts when a crisis strikes. But public health officials do.

“We found responding to Ebola [in 2014] really taxed our ability to respond to other outbreaks because we needed to pull all the staff” from other tasks, said Sharfstein, now an associate dean at the Johns Hopkins Bloomberg School of Public Health.

The same thing is starting to happen now across the country, Blumenstock said.

The cuts result in other problems, often hidden from the public eye. They deprive health departments of needed expertise and trained personnel, which is difficult to replenish in a crisis. The networks of relationships that health departments have with other agencies, hospitals and doctors are often neglected and must be rebuilt every time there is an emergency. All that can lead to slow response times.

The biggest fear remains that more than one dangerous and quickly spreading disease break out simultaneously.

“We’ve been lucky so far, and you don’t want to hope for a different scenario so you can prove your point,” Blumenstock said. “But there are tipping points, and there were times when we were close to those tipping points.”