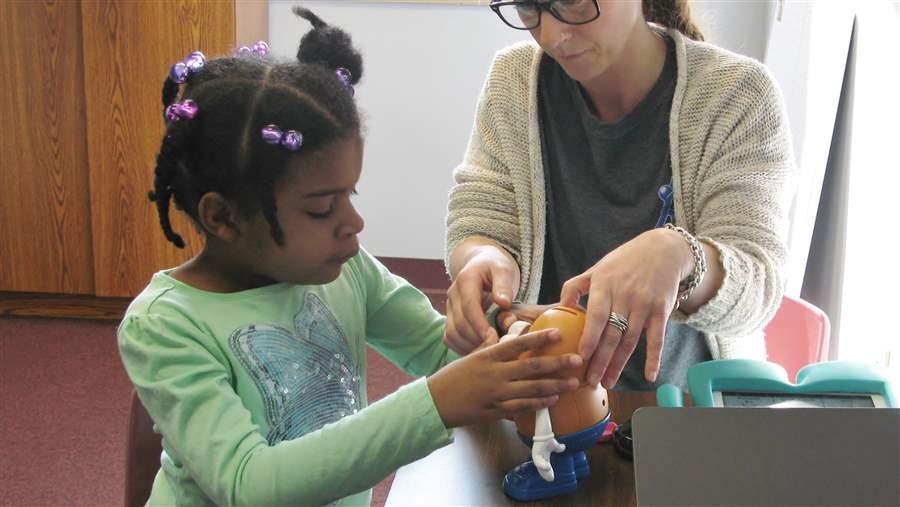 At the Autism Academy of South Carolina in Columbia, Kristen Bettencourt helps 6-year-old Brooke Sharpe assemble a Mr. Potato Head. Health insurance coverage for behavior analysis treatment is hit or miss across the country, despite requirements in 44 states.

This story has been updated throughout.

COLUMBIA, South Carolina — All morning at the Autism Academy of South Carolina, 6-year-old Brooke Sharpe has been doing what her therapist tells her to do: build a Mr. Potato Head; put together a four-piece puzzle of farm animals; roll a tennis ball.

Now it’s Brooke’s turn to choose. She touches an icon of Elsa from the movie “Frozen” on her iPad. When “Let It Go” begins to play, she swings her braids to the music. For Brooke, who has a severe form of autism and doesn’t speak, this is progress: Last year, unable to express a preference, she might have just flailed to the floor in tears, said Kristen Bettencourt, her therapist.

The treatment Brooke is receiving, “applied behavior analysis,” has been proven to help children with autism learn new skills, develop good behaviors and stop bad ones. It is the method known to work best for treating autism, but health insurance doesn’t always cover it.

Since 2001, 44 states have begun requiring some insurance plans to cover ABA for children diagnosed with autism spectrum disorder. But the rules are all different, making for uneven coverage across states. Autism Speaks, a national nonprofit, estimates that 36 percent of Americans have access to autism coverage.

The mandates don’t apply to those companies, often large, that insure their own workers. In some states, small businesses are not required to offer coverage. Depending on the state, coverage may be available to state employees, Medicaid recipients and people purchasing insurance in the marketplaces created under the Affordable Care Act.

The highest annual cap was set at $50,000. That’s the cap in South Carolina, where coverage is required until age 16. Only California, Indiana, Massachusetts and Minnesota require the plans to cover the therapy without any limits on age, cost or frequency.

The disparities among states have sent families, such as Brooke’s, packing. Her parents, Alicia and Edwin Sharpe, sold their “gorgeous house” in Florida, left their jobs, and took $30,000 pay cuts to come to South Carolina, knowing that the state requires some employers to cover the Autism Academy’s full-time treatment program.

After the move, Alicia had to switch jobs twice to find coverage. Without insurance, Brooke’s program, which is full-day, five days a week, costs $50,000 a year.

State lawmakers who want to require insurers to cover the treatment say doing so will save their states money in the long run. The lifetime costs of each person with autism is estimated to be $3.2 million, including medical and treatment costs for families, and costs to society, such as loss of productivity. ABA therapy can reduce those costs, as children who receive the treatment early have less trouble adapting, allowing them to potentially hold a job and pay taxes in the future.

Autism is the fastest-growing developmental disability in children in the nation, according to the Centers for Disease Control and Prevention. About one in 68 children was reported to have autism spectrum disorder in 2010, up from 1 in 150 in 2002, according to the CDC.

Autism advocates say the national movement to expand coverage really started with one boy: Ryan Unumb. Ryan was diagnosed with autism in 2003, just before his second birthday.

His parents, Lorri and Dan Unumb, are attorneys. They pushed South Carolina to become the second state (Indiana was the first, in 2001) to require coverage of the therapy. Autism Speaks hired the couple to push for similar laws in other states. The Unumbs also are the founders of the Autism Academy.

In ABA, board certified behavior analysts and other therapists teach children using requests, repetition and rewards. Brooke knows activities by their one-word prompts, such as “building,” “standing” and “rolling.”

Ryan, now 14, is learning prepositions. At the academy, his therapist, Courtney Lindler, tells him to stand behind something, or on top of it. This way, he will know how to stand in a line somewhere else. The two do push-ups, lunges and squats together — physical activity lessens his aggression.

The laws have come as more people have started to recognize the benefits of ABA therapy for autism, said David Mandell, director of the Center for Mental Health Policy and Services Research at the University of Pennsylvania. He said there is often resistance to covering conditions that doctors diagnose based on behavior, such as autism. Mandell expects mandates to be an easier sell once researchers can find biological markers for autism.

“If we were talking about pediatric cancer, we wouldn’t be having this discussion,” he said.

The six states that do not require that insurers cover the therapy are Alabama, Idaho, North Dakota, Oklahoma, Tennessee and Wyoming. Oklahoma and Alabama are considering bills that would mandate coverage.

Of the 44 states with requirements, 42 passed laws mandating the coverage; in Washington, coverage is required as a result of litigation; and in Ohio it is required because of an executive order from Republican Gov. John Kasich. In both Ohio and Iowa, the rules only apply to health plans for state employees.

Since 2012, 10 states with coverage requirements have expanded them, and Iowa, Nebraska, Ohio and South Carolina are considering doing so this year.

In Ohio, Republican state Rep. Cheryl Grossman has introduced a bill that would expand the coverage requirement to private employers. She said she knows the children who get treatment have a better chance of entering public schools, and achieving independence.

“I’m looking at it as an investment on behalf of these children, and a very meaningful way to help them succeed in their lives,” Grossman said.

But her bill is facing opposition from business groups and insurers.

In Ohio, plans offered on the Affordable Care Act marketplace cover the treatment, so people not happy with their employer’s coverage have the option of getting an individual plan there, said Keith Lake of the Ohio Chamber of Commerce.

Lake said his organization is sympathetic to the plight of families with autistic children. But, he said, Grossman’s bill would increase insurance premiums for small businesses that can ill afford it — especially as the Legislature weighs similar coverage requirements for hearing aids and contraception.

“Anything that the Legislature does that further increases those premiums is a problem,” Lake said.

But premiums have increased less than expected.

In Missouri, where the coverage for treatment was capped at $40,000 a year until age 19, the state found that, in 2015, the mandate cost 30 cents per member per month. That’s at the lower end of the expected cost, said John Huff, director of the Missouri Department of Insurance.

The department estimated the mandate would increase claim payments by 0.2 to 0.5 percent. In 2015, 32,997 claims were filed and the mandate had raised premiums by 0.25 percent, on the low end of expectations.

“As much as anything it is an educational process” for lawmakers, Grossman said, “because we aren’t talking huge numbers here, but we are talking huge successes.”

But even in states that require coverage, families can have a hard time getting it.

After the law passed in New York in 2011, families couldn’t get the coverage for two years due to a licensing problem. The state Department of Financial Services was telling therapists they needed to get an ABA license in order to receive insurance reimbursement, yet the state had no ABA license available. In 2014, the Legislature amended the law, creating a licensing procedure.

In states such as New Jersey, some families have trouble finding therapists who will take their insurance, said Peter Bell, CEO of Eden Autism Services, a nonprofit there. Bell said some insurers’ plans reimburse therapists so little for the therapy that Eden cannot afford to accept them.

Medicaid reimbursement rates also are low in some states. In South Carolina, for example, Medicaid pays up to $15 an hour for therapists who normally charge $50 an hour and $58 for board certified behavior analysts who typically charge $125, Unumb said.

In a handful of states, such as Massachusetts, there is better access to coverage. The Massachusetts mandate includes small businesses and individual plans, and there are no caps. In addition, 62 percent of people working for companies that insure their own workers, which aren’t subject to the mandate, have coverage because their employers have chosen to offer it, according to Amy Weinstock, director of the Autism Insurance Resource Center at the University of Massachusetts, which helps families find coverage.

While the state hasn’t released information about the cost of the mandates, Weinstock said premiums have not gone up much. The law allows insurers to opt out if premiums increase more than 1 percent, and that isn’t happening, she said.

Brooke’s parents said the sacrifices they made to find coverage were worth it. Before they came here, autism had put their only daughter into a “zombie mode” — she wouldn’t even acknowledge them. Now, when they pick her up from the academy, she runs up to shower them with hugs and kisses.

“In the end, you have to do what you need to do for your child,” Edwin Sharpe said. “Because no one is going to care for your child the way you are.”