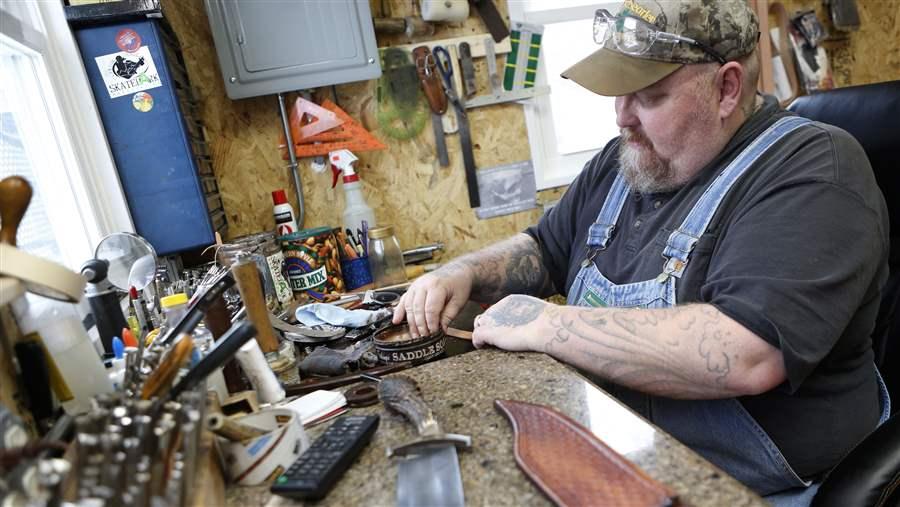 Michael O’Machearley, who makes custom knives in Wilmington, Ohio, earns half what he did before he was laid off from a shipping job in 2008. The loss of blue-collar jobs has helped hollow out the middle class in Ohio and almost every other state.

This story was updated to clarify that Stateline based its definition of “middle class” on a standard developed by the Pew Research Center, but does not consider household size, as the Center does, and does not adjust for differences in the cost of living across states.

Since the turn of the century, the middle class has shrunk in every state but Hawaii. But in 42 states, more people have moved up than down, according to a new Stateline analysis.

The upward movement, however, comes with a huge caveat: Families that have risen above the middle class may still be doing worse than they were in 2000 because the inflation-adjusted median income has declined in all but four states — North Dakota, Oklahoma, South Dakota and Wyoming.

“People are shifting out of that middle category to a higher category, but whether they're better off or not is not as clear,” said Harry Holzer, a Georgetown University professor and the chief economist at the U.S. Department of Labor during the Clinton administration.

To many economists, the shrinking middle class is worrisome regardless of whether more people are rising above that category or falling below it. Either way, the result is more income inequality, which may reduce intergenerational mobility — the ability of children from low-income families to do better than their parents.

These economists argue that rising inequality dampens the demand for goods and services — and harms the overall economy — as affluent households save more and spend less. It also prompts lower-income families to borrow more to sustain their own consumer spending.

In another indicator of growing inequality, the Stateline analysis found that in 44 states, income has grown fastest for households in the top 20 percent of earners — whether at the 80th, 90th or 95th percentile.

But Scott Winship, an economist at the conservative Manhattan Institute, argues that no matter where American families stand on the income ladder, more of them enjoy middle-class living standards than ever before, thanks to technology and more choices for all kinds of goods and services.

“What people really care about is whether fewer people have middle-class living standards over time, and whether they are falling out of the middle class into the lower group,” Winship said.

If any states are in trouble, Winship said, it’s the eight where more people are falling out of the middle class than rising above it. But even in those states, he said, focusing exclusively on income ignores other measures of financial well-being, such as health insurance and investments.

Ohio, one of the 42 states where more people rose above the middle class than fell below it, illustrates the dark side of that seemingly sunny statistic.

Even those Ohio families that have risen above the middle class are feeling the pinch.

Consider an Ohio household that increased its income from $75,000 in 2000 to $100,000 in 2014. That 33 percent increase enabled the family to rise above the middle class, according to the Stateline definition. But because inflation was 41 percent, the household had less purchasing power despite the higher income.

The state’s economy has made progress in recent years, according to Will Cooley, a history professor at Walsh University in Ohio who specializes in labor relations and social mobility. But the loss of manufacturing jobs has had a huge impact on middle-class incomes.

“We’re at the epicenter of the decline,” Cooley said.

Many of the Ohio manufacturing jobs that disappeared were union jobs. The share of household income going to the middle class in Ohio has dropped at about the same rate as union membership since the 1970s, said David Madland, who published a book last year on the hollowing out of the American middle class.

“Unions are central to rebuilding the middle class,” said Madland, a fellow at the liberal Center for American Progress. “The system is only working for people at the top.”

The disappearance of union jobs also may be a factor in some of the states where more people fell out of the middle class than rose above it.

Historically, poverty rates have been high in West Virginia, but the loss of mining jobs has exacerbated the problem. Competition from cheap natural gas, which employs fewer people, has “kicked the bottom out” of the state’s coal market, said economist Roger Congleton of West Virginia University.

“When people are used to those unionized, pretty-well-paying coal mining jobs and they disappear, they don’t know what to do,” Congleton said.

Jobs of any kind are relatively scarce in New Mexico, which has the country’s highest unemployment rate (6.7 percent) and a poverty rate (21.3 percent) second only to Mississippi’s. As other parts of the country have recovered from the recession, many New Mexicans have left the state for opportunities elsewhere, according to Adelamar Alcantara, a senior demographer at the University of New Mexico.

“When they start hearing that the economy is good, that’s when people start leaving,” Alcantara said.

Delaware has struggled to bounce back from the loss of jobs in manufacturing and finance — more people are working in lower-paying retail and health care. Delaware’s biotech industry also is in a slump, said James Butkiewicz, an economics professor at the University of Delaware.