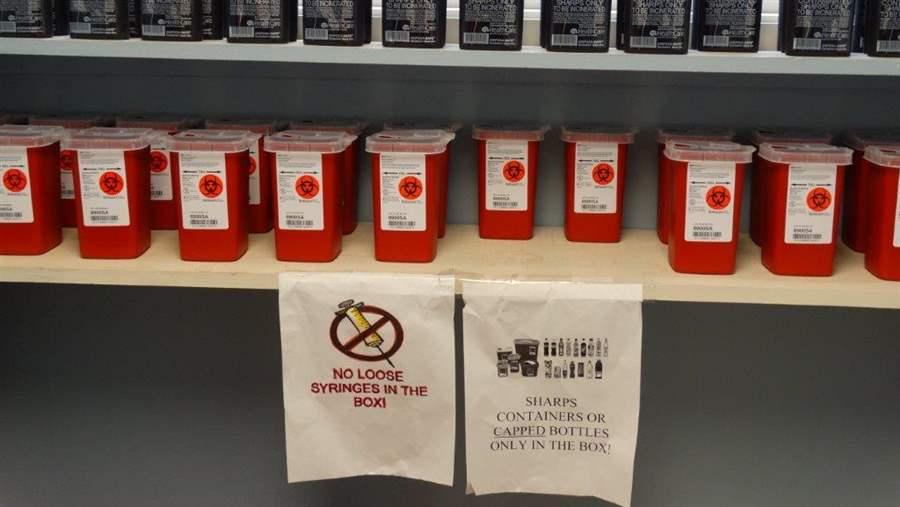 A self-serve supply of needles and containers for their disposal at a Burlington, Vermont, needle exchange center that distributes more than 2,500 needles every day. As the opioid epidemic mushrooms, the demand for treatment is outpacing capacity.

The graphic in this story has been updated to show that buprenorphine is only potentially available.

BURLINGTON, Vermont — After more than a decade of getting high on illicit opioid painkillers and heroin every day, Christopher Dezotelle decided to quit. He saw too many people overdose and die. “I couldn’t do that to my mom or my children,” he said.

He also got tired of having to commit crimes to pay for his habit — or at least the consequences of those crimes. At 33, he has spent more than 11 of his last 17 years incarcerated. The oldest of seven children, he started using marijuana and alcohol when he was 12.

It’s been five years since Dezotelle started treatment the first time, and he still hustles for drugs every day. Only now, instead of heroin or OxyContin, he’s trying to score buprenorphine, one of three federally approved opioid-addiction medications. He says heroin is much easier to find, and it’s less than half the price of buprenorphine on the streets and parking lots of this college town.

Vermont Gov. Peter Shumlin, a Democrat, was among the first in the nation to address the opioid epidemic. He devoted his entire State of the State address to the crisis in 2014. Since then, his administration and many of Vermont’s private practice doctors have made treatment more available than it is in most of the country.

But it’s not enough.

In this state of about 626,000, almost 500 addicts are on waiting lists to receive medication for opioid dependence. More than half will wait close to a year.

Nationwide, a shortage of doctors willing to prescribe buprenorphine, which reduces drug cravings, and a federal limit on the number of patients they can treat, prevents many who could benefit from the addiction medication from getting it.

Less than half of the 2.2 million people who need treatment for opioid addiction are receiving it, U.S. Health and Human Services Secretary Sylvia Burwell said this month, previewing President Barack Obama’s new budget, which was released Tuesday and proposes $1.1 billion to expand the availability of buprenorphine and other opioid-addiction medications.

Where are the Doctors?

More than 900,000 U.S. physicians can write prescriptions for opioid painkillers such as OxyContin, Percocet and Vicodin by simply signing on to a federal registry. Nurse practitioners and physician assistants can also prescribe opioids.

But to prescribe buprenorphine to people who become addicted to opioids and heroin, doctors must take an eight-hour course and apply for a special license. So far, fewer than 32,000 doctors have received the license and the vast majority who have one seldom, if ever, use it.

Vermont has 248 doctors licensed to prescribe buprenorphine, according to the U.S. Substance Abuse and Mental Health Services Administration. All but a few treat only their existing patients who have opioid dependence.

But many who work in the field of addiction question whether allowing licensed doctors to treat more patients will do much to alleviate the shortage. As in Vermont, very few doctors across the country come anywhere close to maxing out on the number of patients they are allowed to have.

The solution, they say, is for more doctors to prescribe the medication. But that’s a long-term solution that involves teaching newly minted doctors about addiction during their residencies and trying to change the hearts and minds of physicians already in private practices, said Dr. John Brooklyn, the medical director of the Howard Center’s opioid treatment program here in Chittenden County. “We’re making progress,” he said. “But it will take time.”

Advocates for greater access to buprenorphine also support a bipartisan bill in Congress — the Recovery Enhancement for Addiction Treatment or TREAT Act — that would allow nurse practitioners and physician assistants to prescribe it.

Without legislation, HHS only has authority to adjust the patient limit and licensing rules for physicians. Melinda Campopiano, chief medical officer at HHS’ Center for Substance Abuse Treatment, agreed that patients with opioid addiction would be better served if more doctors offered addiction screening and treatment.

“What is a concern to me is that more physicians don’t feel the responsibility to step up” and get a license to provide buprenorphine, she said.

When it was approved in 2002, buprenorphine was the first opioid-addiction medication that could be prescribed by doctors. The only other medicine available for addicts at the time was methadone, which had to be dispensed daily at highly regulated clinics. (A third addiction medication, a 30-day injectable form of naltrexone, which has been used to treat opioid addiction since 1984, has since been approved by the U.S. Food and Drug Administration [FDA], but it is expensive and not widely used for opioid addiction in much of the country.)

Although buprenorphine does not produce the euphoric effects of heroin or OxyContin, many drug users purchase it on the street to tide themselves over until they can score the real thing. Some, like Dezotelle, use it to self-medicate.

Clinical research shows that all three opioid-addiction medicines offer a far greater chance of recovery than treatments that do not involve medication, such as 12-step programs and residential stays. Staying in recovery and avoiding relapse for at least a year is more than twice as likely with medications as without them. Medications also lower the risk of a fatal overdose.

Buprenorphine was developed with the idea that family doctors could assess patients presenting with an opioid addiction to make sure the daily oral medication was appropriate and prescribe a monthly supply to be picked up at a local drugstore.

Like methadone, buprenorphine is a long-acting opioid that relieves drug cravings and physical withdrawal symptoms with fewer of the side effects of other opioids. It presents a very low risk of overdose unless taken in combination with benzodiazepines such as Valium or Xanax.

The National Institute on Drug Abuse, which funded buprenorphine’s development, has urged doctors everywhere to start prescribing it to their patients with opioid addiction. That way, people who respond well would no longer have to travel to a methadone clinic every morning. They could get help the same way people with other diseases do — at their local doctor’s office.

So far, that hasn’t happened.

In anticipation of buprenorphine’s approval by the FDA, a 2000 federal law required doctors to seek a special license from the U.S. Drug Enforcement Administration to prescribe it. Without that law, a 1914 federal narcotics law would have precluded doctors from prescribing buprenorphine, and it would have been subject to the same kind of regulation as methadone.

Because buprenorphine is much safer than methadone, Congress wanted to make sure patients didn’t have to disrupt their lives by traveling to one of only 1,200 methadone clinics sparsely scattered across the country to take the daily medication under strict supervision.

In addition to requiring training, the law limited licensed doctors to 30 patients in the first year and 100 patients in subsequent years. The restriction was meant to limit so-called pill mills, in which doctors prescribe addiction medications for a cash fee without ensuring that patients are actually using it to recover and not selling it on the street.

Since then, the law has been criticized for contributing to a shortage of prescribers and unfairly singling out addicts and the doctors who treat them. No other medication requires a special license, and no other disease is subject to a patient limit, argued Dr. Kelly J. Clark, president-elect of the American Society of Addiction Medicine. She said the rules are symptomatic of the nation’s longstanding prejudice against the disease of addiction.

But others argue the rules are warranted to keep buprenorphine off the streets and to ensure quality treatment.

“Treating opioid addiction with medications has to be more than just medication management,” said Mark Parrino, president of the American Association for the Treatment of Opioid Dependence Inc., which represents methadone clinic operators.

If buprenorphine were deregulated, Parrino says there would be no guarantee patients would get the counseling and toxicology exams major medical associations agree they should have. Under current rules, the DEA regularly audits physicians to make sure they are keeping records as required and providing adequate treatment.

Forced to ‘Score’ on the Street

Here in Burlington, at a publicly funded needle exchange center, director Tom Dalton says he’s not worried about diversion of buprenorphine. He said most people who buy it illicitly, like Dezotelle does, are forced to because they can’t get a prescription for it.

Dezotelle is convinced he could stay clean and become productive if he could get and keep a prescription for a daily dose. The first time he took buprenorphine, he said, he started to feel “normal” again. “I was able to start working on some of my emotional issues.”

But after two years on the medication, Dezotelle relapsed. He missed two appointments, and his doctor refused to keep prescribing buprenorphine to him. He said the doctor told him he had other patients on his waiting list who were just as deserving and might do a better job of showing up.

After that, Dezotelle said he searched for another doctor for nearly two years and got on a waiting list here at the Howard Center for a treatment program that provides both methadone and buprenorphine. He stayed in treatment for five months until a parole violation caught up with him and he was sent back to jail.

Waiting lists are tragic, Dalton said. When people make the decision to get clean, they should be able to get into treatment immediately. Otherwise, there’s a good chance they will disappear, die of an overdose, or get arrested. At a minimum, their addiction will escalate, he said. Many who are smoking or snorting opioids start injecting, which spreads diseases such as hepatitis and HIV.

In October, the average wait time to get into the opioid treatment program here in Chittenden County was 358 days. But because the number includes pregnant women who by law must be treated within 48 hours and intravenous drug users who must be treated within 14 days, the wait is much longer for everyone else.

Dezotelle left his most recent incarceration right before Christmas. He signed up for treatment at the Howard Center again and was told the wait could be two years. Desperate to get clean and stay out of jail, he sought advice from Dalton. If he participated in a federal grant aimed at tracking people’s recovery outcomes, he would be given priority on the waitlist.

On Feb. 17, Dezotelle can quit trying to score buprenorphine on the street. He starts treatment.