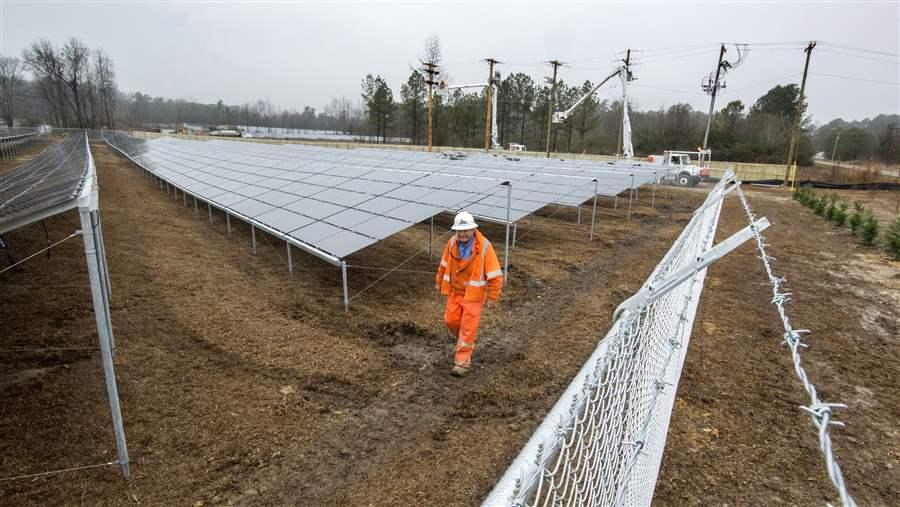 North Carolina’s Ecoplexus solar farm will gather power from acres of solar panels. Although the state has many utility-scale projects, few people have a solar panel at home.

The Rev. Nelson Johnson knows regulators don’t like the $20,000 solar panel system on the roof of his Faith Community Church in Greensboro, North Carolina. But the minister says he’s willing to go to court to protect it.

“This is something that just makes moral sense, spiritual sense and financial sense,” Johnson said. The sun, which God has given everybody, shouldn’t just enrich powerful utility companies, he said.

Sunny Southern states have plenty of solar energy potential, and utilities across the region have begun to build large solar projects as the technology’s price has dropped. But few homes and businesses sport solar panel systems largely because states in the region haven’t embraced policies that support a residential market.

Utility companies say residential solar systems like Johnson’s cost them money because solar owners pay less in monthly electricity bills yet expect their utility to step in and deliver power whenever their system doesn’t. Solar advocates, on the other hand, say residential solar systems save utilities money by taking pressure off the electrical grid.

The solar system on the broad, flat roof of the nondenominational Faith Community Church was put there by NC WARN, an environmental advocacy group, to challenge state regulators. The group owns the system and charges the church for the electricity it produces — an ownership structure that is popular in other states but illegal in North Carolina.

Advocates like Johnson are pushing policymakers to create a friendlier environment for solar power, and several states have begun to do so. But utilities, worried that they may be crowded out, are pushing back.

“It’s not really about solar at all,” Duke Energy Corp. spokesman Randy Wheeless said of the partnership between Faith Community Church and NC WARN. “It’s more about someone trying to set themselves up to be an electric utility when they’re not.”

Up and Coming Sector

Less than half a percent of the U.S.’s electricity comes from solar power. However, the sector is growing rapidly. Two-thirds of all solar photovoltaic installations in the country went online in the past three years, according to the latest data from the Solar Energy Industries Association and GTM Research, a firm that analyzes the electricity industry.

Utility-scale solar farms and solar thermal projects comprise about 60 percent of the nation’s solar capacity. But small-scale solar is also catching on. By the end of 2014, some 600,000 U.S. homes and businesses had a solar system, according to GTM Research.

And the South is a good place for solar. Thanks to close proximity to the equator and lack of cloud and snow cover, more radiation from the sun hits states like North Carolina and Georgia than, say, upstate New York (although less than the desert Southwest). The U.S. Department of Energy calculates that both states receive 5-5.5 kilowatt hours of solar energy per meter per day, compared to upstate New York’s 4-4.5.

Solar power only recently became low-cost enough to compete with other energy sources in the South, said Lauren “Bubba” McDonald, a member of the Georgia Public Service Commission. “What’s making it happen is the technological advancement in solar energy — the panels, the price. That’s what’s making the difference."

Nationwide, policymakers have used financial incentives and regulation to propel utility-scale construction and create a rooftop solar market. Federal and state tax credits, for instance, have made solar investments attractive.

As of October, 29 states required utilities to generate a certain share of their electricity from renewable sources such as solar power, hydropower and biomass, according to the NC State clean energy center. North Carolina is the only Southern state to have such a requirement, excluding Texas in the Southwest. It requires that by calendar year 2018 at least 0.2 percent of electricity sales to retail customers must come from solar.

Small systems remain too expensive for most homeowners and businesses. Cheap electricity from fossil fuels and nuclear power gives property owners less reason to buy a system, and state laws haven’t opened the door to the kinds of third-party ownership arrangements offered by companies like SolarCity Corp. and Sunrun Inc.

An analysis of data from solar panels representing four-fifths of U.S. solar capacity in 2014 found that almost two-thirds of residential solar systems were owned by a third party.

SolarCity’s most popular option is called a power purchase agreement, and it works like this: The company installs a solar system on a customer’s property, for no money down, and commits to maintaining the system over the length of the 20-year contract.

The company pockets tax credits for the installation, sells the customer the electricity (usually at a lower rate than she’d pay her utility) and sells excess electricity back to the grid. If all goes well, the customer saves money and the company makes money.

“It’s the kind of business that people in business school dream about,” said Richard Sedano of the Regulatory Assistance Project, a nonprofit that advises public officials on the power sector.

But no Southern state has lined up all the incentives and regulations needed for the model to work, said SolarCity spokeswoman Suzanne Merkelson. “It all has to be economically efficient. So you sort of have to have the right recipe to get the meal cooking,” she said.

Florida also raises property taxes on buildings that install solar systems, making it harder for property owners to justify the investment, according to SolarCity.

The Fight Over Rooftop Solar

A small but vocal set of advocates — including pastors, environmental activists and tea party conservatives — are calling on lawmakers to let residential solar systems proliferate.

“I believe solar equals freedom. I believe that the [utility] monopolies in Georgia violate the U.S. Constitution,” said Debbie Dooley, a tea party activist who championed Georgia’s third-party ownership law. Ideally, she said, she’d like homeowners to be able to sell electricity to each other.

But utilities often have the upper hand in policy conflicts across the South.

Last year, a coalition of environmental and libertarian groups, Floridians for Solar Choice, launched a ballot initiative that would have lifted all kinds of restrictions on rooftop solar. It would have allowed third-party ownership and prevented utilities from charging system owners additional fees.

Utilities, in response, backed a rival ballot initiative that emphasized the right to own or lease a solar panel but also the right governments have to regulate solar ownership.

Screven Watson, a Democratic political consultant working on behalf of the utility-backed initiative, says it would allow regulators to protect consumers from solar installation scams. “We have seen evidence of unscrupulous practices in the solar industry already in Florida.”

The coalition’s initiative didn’t gather enough signatures to qualify for the ballot this year. The utilities’ did, though it faces a challenge from the pro-solar group before the state Supreme Court.

Last spring, North Carolina state Rep. John Szoka, a Republican, tried to legalize third-party ownership through his Energy Freedom Act. “If you can generate some of your own energy, why not?” he said.

Szoka tried to convince his colleagues that residential solar could introduce beneficial competition into markets currently monopolized by companies like Duke Energy. But he had little success, he said. The bill never made it out of committee, and he doesn’t think it will move forward this session.

Asked about the company’s position on his bill, Szoka said: “Duke is like any other corporation. They need to maximize profits for shareholders.”

Wheeless, the Duke spokesman, said the company would have been more likely to back Szoka’s bill if it had addressed several related issues, such as the state’s expired renewable energy tax credit, or how utilities would interact with a rooftop solar market.

The company supported South Carolina’s comprehensive 2014 solar legislation, Wheeless noted. And he pointed to Duke’s new small-scale solar programs in the Palmetto State, which include customer rebates for homeowners who buy solar systems.

Now it’s up to regulators to decide whether Faith Community Church’s solar panel system breaks state law. Regardless of the North Carolina Utilities Commission’s decision, Johnson is bracing for competing lawsuits from Duke and NC WARN. “We’re happy to be an advocate for this,” he said.

In the meantime, he’ll keep talking about solar and its benefits. In a few weeks, he’ll meet with about 20 other area faith leaders who are interested in building a solar farm.