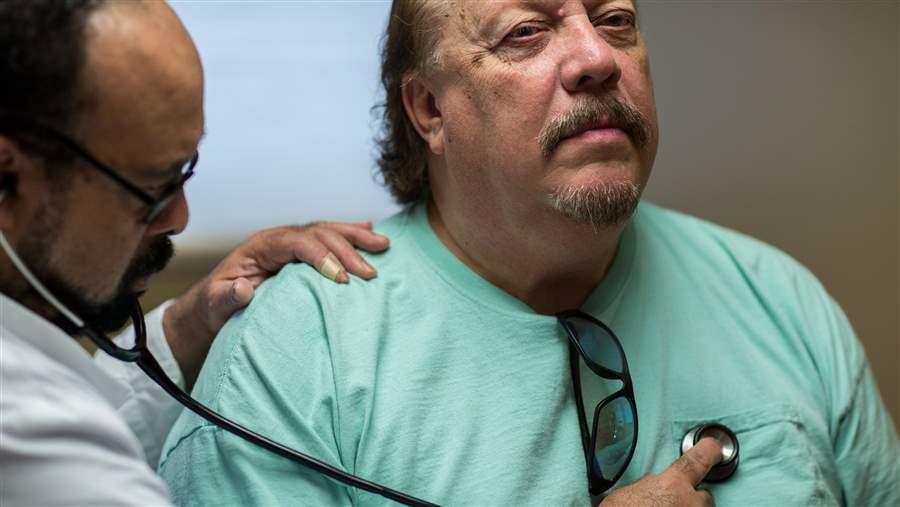 Health care spending by state and local governments changed by the second smallest rate on record in 2014, a year in which millions of Americans gained health insurance through the Affordable Care Act’s expansion of state Medicaid programs.

State and local health care spending rose by just 1.8 percent to $515 billion, according to the latest data from the Centers for Medicare & Medicaid Services (CMS), a unit of the U.S. Department of Health and Human Services. By comparison, the country’s total health bill—public and private—increased by 5.3 percent, breaking a five-year string of historically slow national growth of 4 percent or less.

The state and local deceleration, second only to a 1.4 percent drop in 2009, occurred across spending categories, but was principally driven by especially slow growth in the two largest: state Medicaid payments (0.9 percent) and public employee health insurance premiums (3.7 percent).

Even with coverage expansion, state Medicaid spending levels off

One element that slowed the growth of state Medicaid expenditures was modest but steady economic recovery. The rolls of beneficiaries who were eligible prior to the ACA’s coverage changes expanded marginally, as all 50 states and the District of Columbia saw their annual average unemployment rate fall in 2014. (Analysis of state employment—not unemployment—trends can be found here). As a result, state Medicaid spending ticked up by just 0.9 percent, only the fourth time it has grown by less than 1 percent since 1987, the earliest year for which data are available.

The division of state and federal responsibility for financing the cost of newly eligible enrollees, as outlined in the ACA, also helped to contain state Medicaid spending growth. Beginning Jan. 1, 2014, the jointly funded federal-state health care program for low-income children, parents, people with disabilities, and the elderly became available to all individuals who earn up to 138 percent of the federal poverty level ($16,105 for a single adult in 2014). The federal government, which covered 58 percent of total Medicaid costs in 2013, committed to covering 100 percent of the bill for newly eligible enrollees (in those states that opted for expansion under the ACA) from 2014 to 2016, phasing down to 90 percent in 2020 and thereafter.

The new CMS spending data show that the federal government shielded states from the costs of the ACA Medicaid expansion during the first year of implementation. In contrast to the unusually low spending growth at the state level, federal Medicaid expenditures rose by 18.4 percent, up from 6.1 percent in 2013.

Medicaid is states’ biggest expense after K-12 education. The share of states’ own money spent on Medicaid coverage grew from fiscal 2000 to 2012 but leveled off in 2013, according to an analysis by Pew’s Fiscal 50 resource. The latest CMS data point to a similar trend for 2014.

The 3.7 percent uptick in spending on health insurance premiums for state and local government employees was the fourth consecutive year of growth at or below 4 percent. By way of comparison, the constant annual growth rate from 2000 to 2010 was 9.8 percent. In the wake of the Great Recession, insurance costs have been held down as state and local governments reduced their workforces—and thus likely the numbers of those covered—and employer-sponsored insurance premiums rose moderately nationwide. (More information on state employee health plan spending can be found here.)

Despite the recent slowdown in spending growth, health care has long posed a fiscal challenge for states and localities that must balance competing priorities and align spending with revenue and reserves each year.

State and local government health care expenditures as a share of revenue totaled 30 percent in 2014, up from 16 percent in 1987, according to Pew’s analysis of data from CMS and the Bureau of Economic Analysis. (See Figure 1.) But their fiscal footprint has remained stable since 2011 and actually fell slightly in 2013 and 2014, the first reductions since 2006. 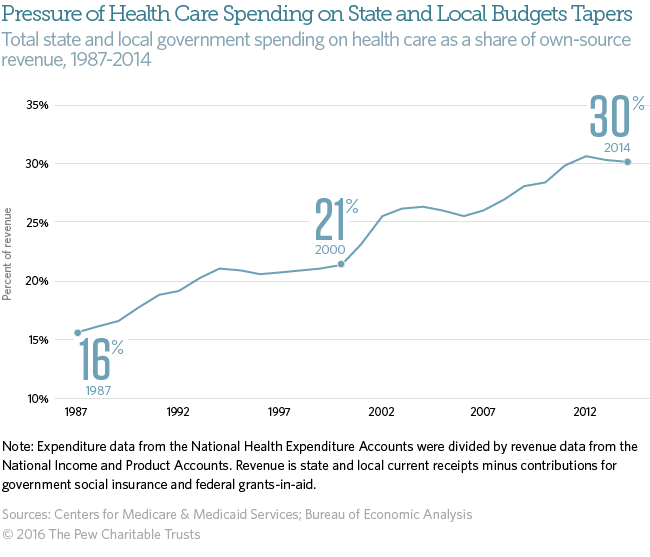 Combined health care expenditures by state and local governments, in inflation-adjusted dollars, increased by 265 percent from 1987 to 2014, according to Pew’s calculations. The most significant elements of this expansion were state and local contributions to Medicaid and to public employee health insurance premiums, which experienced real increases of 367 percent and 495 percent, respectively. (See Figure 2.) Over this period, the total number of Americans covered by Medicaid throughout the year rose by 46 million.

CMS projects that state and local government spending will rise by 56 percent in inflation-adjusted dollars from 2014 to 2024. However, if recent history is a guide, this may overstate future growth. For example, as recently as 2012, CMS projected that state and local spending would rise to $569 billion in 2014—10 percent higher than reality. CMS economists pin the overestimate on, among other factors, sluggish economic growth that lagged expectations and constrained spending, as well as lower-than-anticipated medical price inflation, which held costs down for payors across all sectors in recent years. The agency later adjusted its projections down in each of the three subsequent years. 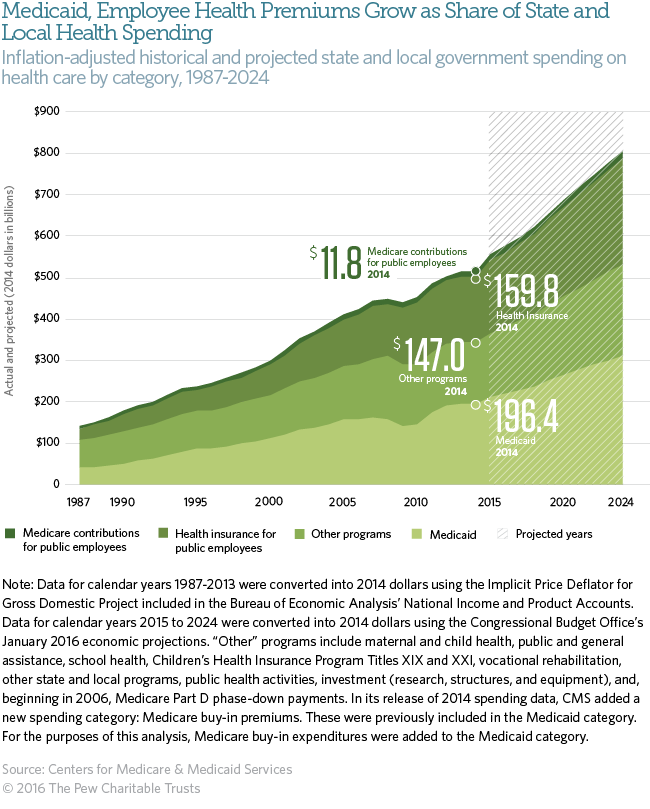 Looking further ahead, the Government Accountability Office (GAO)—the nonpartisan investigative arm of Congress—warns that, based on current law, health care spending is a primary driver of the long-term fiscal challenges ahead for state and local governments. According to the agency’s simulation, state and local health-related expenditures are on track to nearly match all other program spending by the middle of this century (See Figure 3.). However, as with the CMS projections, GAO has recently made downward adjustments to its long-term projection of state and local health spending. 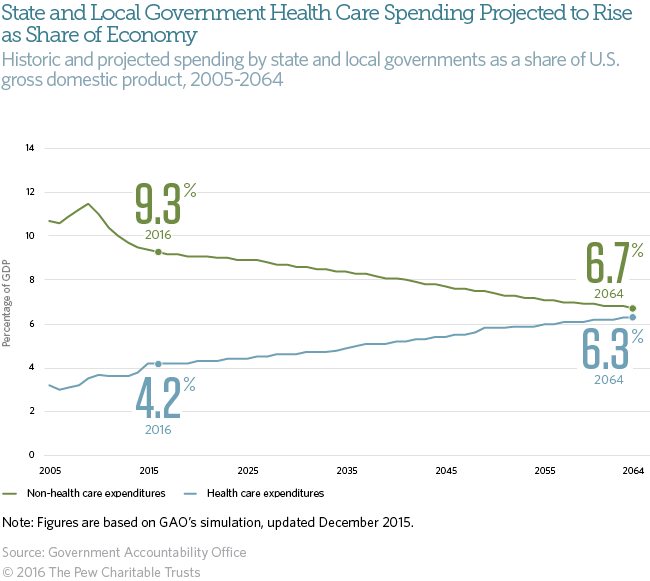