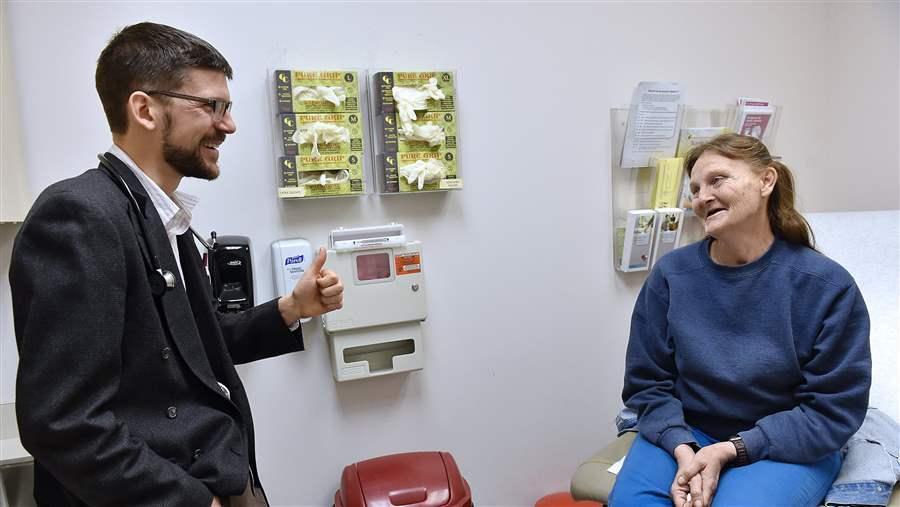 A doctor at a Kansas City, Missouri, clinic tells a patient she has been cured of the hepatitis C virus. Several federal lawsuits are testing whether states must bear the cost of providing expensive hepatitis C drugs to Medicaid beneficiaries and prisoners.

A handful of federal lawsuits against states that have denied highly effective but costly hepatitis C drugs to Medicaid patients and prisoners could cost states hundreds of millions of dollars.

The drugs boast cure rates of 95 percent or better, compared to 40 percent for previous treatments. But they cost between $83,000 and $95,000 for a single course of treatment.

The class actions, all filed in the last eight months in federal courts in Indiana, Massachusetts, Minnesota and Pennsylvania, present a series of extremes: a deadly epidemic, a treatment that can stop the disease in its tracks, and an enormous price tag.

At least 3.5 million Americans have hepatitis C, a virus spread through blood-to-blood contact that is usually contracted through the sharing of needles or other equipment to inject drugs. Left untreated, hepatitis C slowly destroys the liver. Medicaid beneficiaries, a low-income population, have a slightly higher rate of hepatitis C infection than the privately insured, and the rate among prisoners is 30 times higher than in the general population.

The U.S. Food and Drug Administration approved the first of the new drugs, Sovaldi, in 2013. Since then, the FDA has also approved two other drugs, Viekira Pak and Harvoni.

But because the drugs are so expensive, state Medicaid programs and prisons have been restricting them to people in the advanced stages of the disease.

While they are waiting to meet that standard, patients with less advanced hepatitis C may develop cirrhosis, liver cancer or liver failure, which may necessitate a liver transplant. According to the U.S. Centers for Disease Control and Prevention, 60 to 70 percent of those with hepatitis C will develop chronic liver disease; 5 to 20 percent will develop cirrhosis; and 1 to 5 percent will die of liver failure or liver cancer.

The plaintiffs in the lawsuits argue that by denying the drugs to hepatitis C patients, states are violating the law. Under federal law, states can exclude a drug from Medicaid coverage only if its prescribed use “is not for a medically accepted indication” as determined by the FDA.

Federal court cases have established a lower standard for prison health care. Prisons must provide health care to inmates, but can deliver it as they see fit, as long as they don’t demonstrate “a deliberate indifference to serious medical need.”

“The restrictions states are using are not based on medical evidence,” said Lynn Taylor, an infectious disease doctor in Rhode Island who co-authored a study finding that a large majority of state Medicaid agencies are restricting access to the new drugs. “They make these rules up out of thin air, and they are discriminatory.”

But Matt Salo, executive director of the National Association of State Medicaid Directors, said making the drugs available to all those infected with hepatitis C “would blow up state budgets.”

“We would be spending more on this one drug than all other drugs combined,” Salo said. “There isn’t the capacity to do that.”

At a recent meeting on infectious diseases, Scott Holmberg, chief of the Epidemiology and Surveillance Branch at CDC’s Division of Viral Hepatitis, reported that in 2013, more Americans died of hepatitis C than from 59 other infectious diseases combined, including HIV and tuberculosis.

But in December, the U.S. Senate Finance Committee, which investigated the impact of the high price of Sovaldi, found that in 2014, only about 2.4 percent of Medicaid beneficiaries with hepatitis C had received the drug.

Vincent Lo Re, an epidemiologist and infectious disease doctor at the University of Pennsylvania, reported in November that in Medicaid agencies in four states — Delaware, Maryland, New Jersey and Pennsylvania — nearly half of all claims for the new hepatitis C drugs had been rejected. Lo Re found a 5 percent denial rate for Medicare beneficiaries and 10 percent for policyholders with private insurance in those same states.

Lo Re said he undertook the study because so many of his patients were being turned down for the new drugs despite his insistence that they needed them. Many of those patients, he said, are advancing to more serious stages of liver disease.

Taylor’s study, published last summer, examined how state Medicaid agencies decide who will get Sovaldi, which is manufactured by the pharmaceutical company Gilead.

At least 34 states restricted treatment to patients who had reached an advanced stage of liver disease, as determined by the level of scarring on the liver. Thirty-seven states permitted their Medicaid agencies to determine whether the potential recipient was abusing alcohol or drugs, and some required some period of abstinence. And 29 states would only consider approval if the prescriber was a specialist in gastroenterology, hepatology, infectious diseases or liver transplantation.

Some state Medicaid agencies, such as Pennsylvania’s, have recently lifted the restrictions. A spokesperson for the state Medicaid office acknowledged that the policy change would result in a “significant fiscal challenge” and the state was pressing hard for any discounts that might be available.

Separate from the lawsuits, Massachusetts Attorney General Maura Healey, a Democrat, late last month threatened Gilead with an investigation of its possible “unfair trade practice in violation of Massachusetts law” if it doesn’t lower its prices for Sovaldi and Harvoni, which it also manufactures.

The drugmaker, which has consistently said that its hepatitis C drugs are worth the price because of their effectiveness, has asked to meet with Healey.

Taylor said states’ restrictive practices are discriminatory because they aren’t applying the same standards to treatments for any other diseases. “We don’t withhold cancer treatment to only those with the most advanced stages of the disease,” she said. “We don’t deny smokers treatment for lung cancer.”

Many doctors point out that while the new hepatitis C drugs can arrest the disease, they cannot undo liver damage.

Advocates for universal treatment also argue that treating patients sooner rather than later spares the health system the greater costs of treating liver cancer or undertaking transplants. It also prevents the spread of the infection to others.

Several medical societies, including the Infectious Diseases Society of America and the American Association for the Study of Liver Disease, recommend early treatment for hepatitis C. The American College of Correctional Physicians says that prison doctors should decide which inmates to treat based on medical evidence, not cost. It acknowledges, however, that to eradicate the virus in prisons, “We must be allocated adequate resources to implement the goal in a medically responsible way, including funding for disease surveillance, screening, medically appropriate evaluation and complete disease treatment.”

But paying for treatment for everyone now is unimaginable for states, which are required to balance their budgets every year, said Salo of the Medicaid directors group.

He said the penny wise and pound foolish argument isn’t relevant to the real world of state budget-making.

“It’s true if you take a time horizon of 30 years, but that’s not reasonable or rational or realistic in Medicaid,” he said. “We budget on a one-year or a two-year cycle.”

Several legal analysts said the plaintiffs in the Indiana lawsuit, which concerns Medicaid beneficiaries, might have a better chance than the prison plaintiffs in suits in Massachusetts, Minnesota and Pennsylvania.

“At first glance, I’d say the plaintiffs [in Indiana] have a strong case,” said Nicholas Bagley, a health law professor at the University of Michigan Law School. “I’ll be very curious to see what justification Indiana presents for their denials.”

The state said it could not comment on pending litigation.

John V. Jacobi, a professor at Seton Hall Law School who specializes in health policy, said the medical necessity standard does not apply to prisoners. The question in the prison cases, Jacobi said, will be whether the denial of the drugs qualifies as “deliberate indifference.”

Joel Thompson, an attorney with Prisoners’ Legal Services, who is representing prisoners in the Massachusetts case, said he thinks it does.

“People knew for years these new drugs were coming,” he said. “Prisoners were counseled for years away from the treatments that were then available because better stuff was coming with no side effects and a guaranteed cure. A fair amount of money got saved because of that and it got saved at the expense of our clients, who only got sicker.”