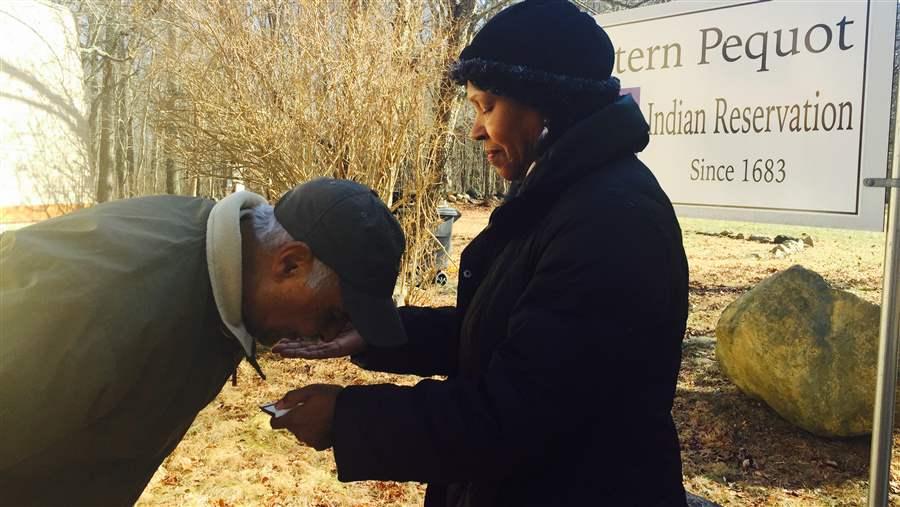 Eastern Pequot Tribal Nation leaders Joseph Perry and Katherine Sebastian perform a smudging ceremony to honor their ancestors on the powwow grounds at their reservation in Connecticut. Their tribe is one of hundreds that have applied for federal recognition since 1978.

NORTH STONINGTON, Connecticut—Call it a tale of two tribes, separated here by a few miles, connected by DNA, but with decidedly different fortunes. To the west, there is the Mashantucket Western Pequot Tribal Nation reservation: rolling lawns, tribal museum, lavish houses, casino. To the east, there is the Eastern Pequot Tribal Nation reservation: rutted roads, port-a-potties, rusted trailers. No casino.

Both are Native American tribes with ancestry dating to pre-Colonial times. Both are recognized as Indian by the state of Connecticut. But the Mashantucket have enjoyed federal recognition since 1983, while the Eastern Pequots (Pee-kwots) won recognition in 2002 after a 24-year battle — and lost it in 2005.

Connecticut Gov. Dannel Malloy, a Democrat, has fought federal recognition of the Eastern Pequots and two other Connecticut tribes, even hand-delivering a letter to President Obama. And that, the Eastern Pequots say, has made all the difference in their ability to govern themselves; provide health care, housing and educational services for their 1,165 members; or even pave their roads. Without federal support and services — and without the assistance of the state to help get them — the development and survival of their tribe is at risk, they say.

The Eastern Pequots launched their petition in 1978, a decade before tribal gaming was a legal option to help them develop economically. And at one point, they wanted to build a casino like the one that brought in hundreds of millions of dollars for their cousins, the Mashantuckets. Now, they’re ambivalent. The gambling market isn’t what it used to be. But Malloy, they say, is using an opposition to more gaming in his state as a ruse to block their other route to economic development.

(Malloy’s office did not respond to repeated requests from Stateline for comment.)

The Eastern Pequots are not alone in their quest to gain the government assistance they say they need to survive economically. There are 356 tribes that have applied to join the 567 federally recognized American Indian and Alaska Native tribes spread through 34 states.

Only 14 states have some sort of tribal recognition process in place, according to the National Conference of State Legislatures (NCSL). But what that means for American Indian tribes can vary widely, from token acknowledgement to active assistance.

On the other hand, federal recognition means a lot: It allows a tribe to act as a sovereign nation, with the right to adjudicate legal cases and levy taxes. It protects tribal land and exempts a tribe from state and local jurisdiction. And the tribe becomes eligible for federally funded services such as health care and housing assistance — and, potentially, to open a casino.

But getting there is a Catch-22: federal recognition can provide a path to financial stability. To get that recognition, though, you need deep pockets — and it helps to have state leaders on your side, tribal leaders say.

It’s a process that often pits tribes against one another. Federally recognized tribes sometimes block others because they don’t want the competition that would come with new casinos, said Mary Ann Jacobs, who chairs the American Indian studies department at the University of North Carolina at Pembroke and is a member of the Lumbee Tribe.

Jacobs points to the Eastern Band of Cherokee, which owns Harrah’s Cherokee Casino Resort in North Carolina. It opposes the Lumbee Tribe’s petition, arguing the Lumbees aren’t real Indians. Were the Lumbee Tribe to open a casino, its convenient location would pose a competitive threat. “That would make a huge difference in [the Cherokees’] bottom line,” she said.

There are three ways a tribe can be recognized: through an act of Congress, a U.S. Bureau of Indian Affairs (BIA) administrative process, or a court decision.

The key: a tribe has to prove that it is descended from the nation’s original Americans, which can be a Sisyphean task. There are birth certificates to find, marriage licenses, death certificates, census records. Tribes spend millions of dollars on genealogists, lawyers and lobbyists, which often means finding outside investors.

“It’s a ridiculous process,” said Arlinda Locklear, a Washington, D.C.-based lawyer who has worked with tribes to secure recognition. “But without recognition, you are a non-entity as far as the federal government is concerned.”

Nedra Darling, a spokeswoman in the office of the assistant secretary for Indian Affairs at the Interior Department, said petitioning tribes must meet seven criteria to be acknowledged, including: political influence or authority from 1900 to the present; a current governing document; descent from a historical tribe or tribes; proof that most members can’t claim membership in other tribes; and the tribe can’t be one that had been “terminated” by Congress.

Since 1978, the BIA has considered 120 claims at a rate of about three per year, Darling said. Of that number, acknowledgment was granted to 18 tribes and denied to 32. Once denied, a group can’t petition again, a provision the Eastern Pequots are fighting, said tribal chairwoman Katherine Sebastian.

Regulations enacted in July speed the process, Darling said, by trimming some requirements, such as allowing tribes to provide documentation of their heritage dating only to 1900.

The changes were met with opposition from critics who said they made it easier for tribes to win recognition — and potentially open casinos. Stand Up For California fought the Pamunkey petition specifically to challenge the new regulations, said Cheryl Schmit, whose community formed the group 20 years ago to combat tribal gaming in their small town of Penryn in Northern California.

Although the Pamunkeys are based in Virginia, the new rules seemed “tailor-made” to help the 81 tribes in California that are seeking federal recognition, she said. In California, where there are already 109 federally recognized tribes and 69 Indian casinos, another 33 casinos could be added in urban areas such as Los Angeles, San Diego and San Francisco, Schmit said.

The new rules “loosened the criteria,” Schmit said, adding that her group is not anti-gaming. “Will they recognize the correct tribe, or an illegitimate tribe?” Federally recognized tribes “can acquire their own land and create laws on a piece of property” and non-Indians in the community will have no say, she said.

Schmit, who is not Native American, said she is not swayed by tribes who say that their primary motivation is the survival of their communities — not gambling. “I don’t believe it for one minute.”

Casinos have changed everything for many tribes.

In 1988, President Ronald Reagan signed the Indian Gaming Regulatory Act, which authorized casino gambling on Native American reservations. Casinos provided a way for tribes to attain financial self-sufficiency. The numbers of tribes seeking recognition jumped exponentially, though not every casino is successful.

And it was at that point that Malloy stepped in to block their petition as well as those of the Schaghticokes and the Golden Hill Paugussetts, Sebastian said. When both the Eastern Pequots and the Schaghticokes won federal recognition in the last decade, the state appealed and won — and the investors pulled out.

“We’ve had an adversarial relationship with the state for a long time,” Sebastian said, adding that the tribe has not ruled out suing the state.

Besides the Mashantuckets, the state has one other federally recognized tribe, the Mohegan Tribe, which also owns a casino. If Connecticut’s other tribes who’d expressed interest in gaming were recognized, Malloy wrote President Obama in 2014, “the consequences would be devastating … causing significant economic hardship to Connecticut residents.”

As the Eastern Pequots see it, the state is hypocritical: It receives hundreds of millions of dollars in revenue-sharing payments from tribal casinos. In fiscal 2014-15, Connecticut received $117 million from the Foxwoods Casino, a sprawling multiplex owned by the Mashantucket, according to state records. In fiscal 2015-16, it has so far received about $60 million.

“It’s fundamentally an issue of fairness,” Sebastian said. “Here we are, a state-recognized tribe. By law, the state must assist us in maintaining our reservation. Instead, they have vehemently opposed us.”

The Eastern Pequots have been recognized by Connecticut since Colonial times. And having state recognition can be a first step in the process of federal recognition, said Martha Salazar, senior policy specialist for NCSL.

Some states recognize a tribe through legislation. Others do it through a state agency, or the governor issues a proclamation.

With some states, formal recognition brings certain benefits. In Alabama, Connecticut, Louisiana and North Carolina, Indian tribes can apply for programs and services, get help with navigating the bureaucracy, and in some instances the state will provide education funding, according to Salazar.

As Sebastian sees it, it’s a miracle the Eastern Pequots are not extinct. Hundreds were massacred by English settlers in 1637. Over the centuries, they intermarried with formerly enslaved Africans, European settlers and other Indian tribes, but always maintained their Eastern Pequot genealogy, she said, even as they scattered around the country. Some are lawyers and doctors — she herself is a retired attorney — but others struggle with unemployment.

As Sebastian talks, Joseph Perry, the tribal treasurer, drives across the unpaved roads of their 225-acre reservation. Just across the way, you can see the Foxwood Casinos, a turquoise colored Shangri-la.

Here, on the reservation, amid often impenetrable forest on the Rhode Island border, “life is extremely hard,” Sebastian said, pointing to the houses where her 80-year-old uncle and 30-year-old son live.

The land is rocky and hilly with no running water, sewers or electricity. Those who live there either do without or scrounge up the $10,000 needed to rig up their own power and plumbing.

Federal recognition would mean that they would have the resources to develop the infrastructure, Sebastian said. They’re looking into ways outside of gambling to provide housing and health care and ensure the longevity of their tribe: a resort, forestry and stone harvesting are ideas they are considering.

The Eastern Pequots are committed to seeing this through, so far submitting 70,000 pages of documents to the BIA to bolster their claims.

“The state is spending taxpayer money to fight us,” Sebastian said. “We’re going up against the state and big money interests. This could be a long battle.”