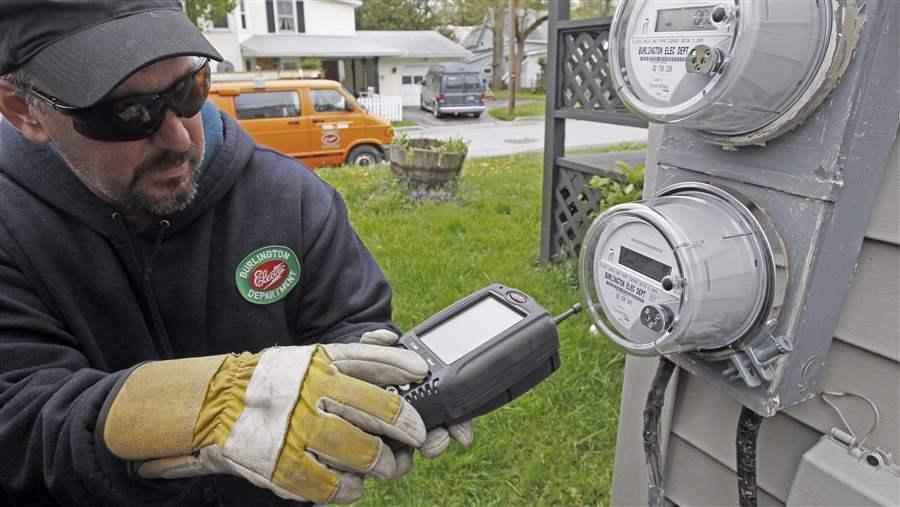 A Burlington Electric employee checks the radio frequency of a smart meter in Vermont, which in 2012 became the first state to allow electric customers to refuse smart meters at no added cost.

Shortly after Joe Davidson moved into his Cincinnati apartment, he noticed his joints were achy and he wasn’t sleeping well. Then he needed two root canals.

Davidson is among a small but outspoken group of people who say the radio frequencies coming from so-called smart meters installed in their homes are making them sick. The wireless devices — designed to measure gas and electricity consumption and help consumers save money — have other critics, such as privacy advocates who argue they could violate customers’ privacy and consumer advocates who complain they could lead to higher utility bills.

Driven by these concerns, legislators in several states have moved to give consumers options when it comes to installing smart meters in their homes.

According to the National Conference of State Legislatures, at least 15 states allow customers to opt out of smart meter installation, although many permit utility companies to impose a fee on customers who don’t want the meters.

This year, lawmakers in Maryland, Massachusetts, Ohio, Pennsylvania and Texas are expected to consider bills that would allow consumers to keep their existing analog meters; require customers to opt in to smart meter programs; or allow them to refuse the devices, sometimes at no cost.

Smart meters measure the consumption of energy as customers use it and submit that information to utility companies, eliminating the need to estimate bills and to visit homes and businesses to read meters.

The meters also allow consumers to track their own energy use. And energy industry representatives say the devices make it easier to pinpoint and respond to power outages, and could lead to more accurate pricing that reflects how gas and electricity costs fluctuate throughout the day.

The meters are touted as a way to cut energy use and save customers money by allowing better monitoring of consumption so utilities can adjust production and consumers can change their habits.

Buoyed by $200 million in federal funding in 2009, utilities had installed nearly 52 million smart meters by 2013, according to the U.S. Energy Information Administration (EIA). Eighty-nine percent of those were installed in homes.

But opponents say the meters have been forced upon consumers who don’t want the digital devices and the fees many utility companies charge those customers are unjust.

“There’s no reason to charge someone for something they don’t want,” said Del. Glen Glass, a Republican from Maryland who plans to introduce legislation that would prevent utility companies from charging extra to customers who refuse smart meters.

Maryland residents who reject smart meters pay a $75 one-time fee and an additional $5.50 each month. But few people actually choose to opt out of smart meters, said Marc Harnish, an analyst with the EIA.

Because smart meters convey information over wireless networks, some opponents worry the data they transmit could be stolen and used by criminals to target individual homes. For example, by looking at when power is being used, a thief could determine when a house is empty, said Bradley Shear, a Maryland-based privacy lawyer.

“I don’t see these issues going away. In fact I see them becoming more complex as more utility companies install these technologies,” said Shear, who also worries that hackers could steal customers’ personal and financial information.

But advocates for smart meters — such as the nonprofit Smart Grid Consumer Collaborative, which is supported by utility companies, and consumer and conservation groups — say those worries are misplaced.

Patty Durand, the group’s director, said the meters don’t transmit that kind of data and only send information about how much electricity is being used. She said utility companies have had no data breaches, and though she expects they will eventually, she says consumers are at very little risk because the meters aren’t transmitting personal financial information such as credit card numbers.

And, proponents say, criminals looking to rob a home are much more likely to lurk outside someone’s house than they are to hack their network.

Eventually more people will have appliances that hook into a home’s smart meter to use power more efficiently, saving them money on utility bills, Harnish said. For example, a refrigerator could use information from a smart meter to cool down at a point in the day when energy is relatively cheap.

But bringing appliances online will just give utility companies and potential hackers a more intimate portrait of what’s going on in a person’s home, Shear said. This detailed data could be sold to outside companies for marketing or other purposes, he said.

“I don’t expect the minutiae of what I did in my house to be fair game,” Shear said.

To avoid that, Pennsylvania state Rep. Mike Reese, a Republican, has introduced legislation that would reverse a state smart meter mandate and limit how and when utility companies can share information gleaned from the meters.

“This gives a level of confidence to our customers that their information is private,” Reese said.

Utility companies like smart meters because they save money in multiple ways, Harnish said.

Because the devices are on wireless networks, a power company can see exactly where a power outage occurs instead of relying on customer phone calls and dispatching people to look for the outage, he said.

“They’re able to get electricity back up quicker,” Harnish said. “That’s a big revenue saver.”

The price of energy also changes throughout the day as demand rises and falls, and smart meters allow utility companies to adjust what they charge customers for energy as they use it.

But most utilities are not using this kind of pricing yet, APPA officials said. Some offer rebates for people who use less energy during times of high demand, but most bill consumers at a flat rate.

Davidson is convinced the smart meters made him sick and the wireless radiation they emit continues to make other people sick.

A doctor certified that Davidson was sensitive to the radio frequency of the meter and it was removed by his power company after he lobbied the Ohio Public Utilities Commission. Slowly, he started to feel better.

Now an Ohio state senator is pushing legislation that would require that utility companies get permission from property owners before installing smart meters.

Based on surveys from the Smart Grid Consumer Collaborative, worries about safety and health are the biggest consumer qualm about smart meters, director Durand said.

Kate Kheel, the director of Maryland Smart Meter Awareness, a group that opposes smart meters, points to surveys in which people in the U.S. and Australia say they have had headaches, dizziness and fatigue after being exposed to the meters.

“It’s not right to force this kind of exposure 24/7 on someone’s home without knowledge of the science,” Kheel said.

The International Agency for Research on Cancer reports that the kind of radio frequency given off by the meters may be carcinogenic to humans. But the American Cancer Society says it is unclear if smart meters put people at risk for developing cancer.

Durand’s group says the meters emit much weaker radio frequencies than other common devices such as cellphones, baby monitors and microwaves.

“We’re confident there is no health risk associated with electrical pulses that smart meters are sending,” she said.