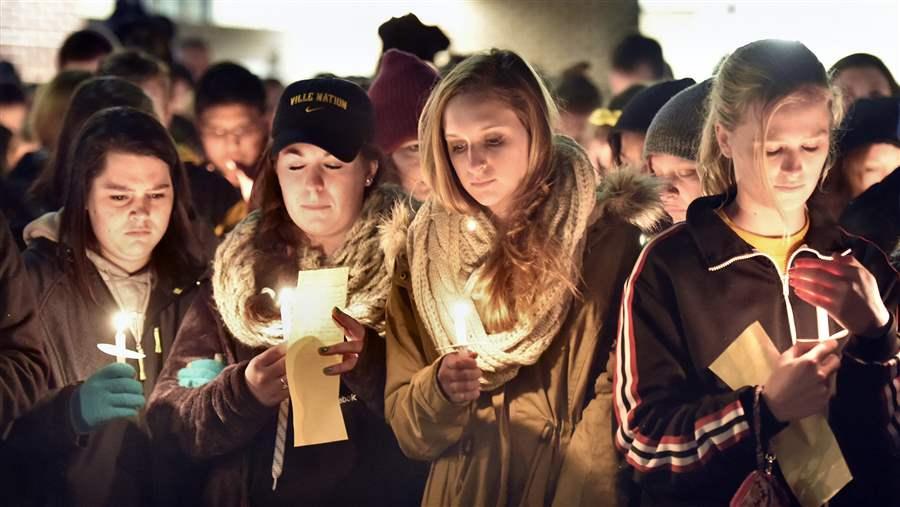 At a school in poverty-stricken East Oakland, California, Emilio Ortega asks the teenage boys he counsels how it would feel to see their mother, or sister, abused by a husband or boyfriend.

He knows they see people they admire on TV, in rap songs, and sometimes even at home channel their anger into aggression. Some of the boys, he said, have come to think that hitting or verbally abusing a romantic partner is normal — even funny.

In middle and high schools across the country, counselors and teachers like Ortega are quickly becoming the front line of defense for state officials looking to prevent teen dating violence, and the cycle of violence that follows.

Research shows that teenagers who experience violence — either as victims or as abusers — are more likely to be involved in it later in their lives, which leads to more people in hospitals, behind bars and receiving welfare. States hope that investing in education programs now will help prevent those negative, and expensive, outcomes down the road.

About one in 10 high school students who dated in 2013 reported being physically or sexually abused by a partner during the past year, according to the most recent survey of high school students by the Centers for Disease Control and Prevention. The percentages have fluctuated over time, but the 2013 figure is the highest ever recorded.

In recent years, sexual abuse incidents on high school and college campuses and heated debates over sexual consent policies have heightened public awareness of the issue. In addition, the Obama administration has emphasized that under Title IX, all schools — from elementary schools to colleges — that receive public funding are obligated to take steps to prevent sexual violence. Last week, the president called teen dating violence “a serious violation that can affect a young person’s safety, development, and sense of comfort” and called for support for programs that help young people develop healthy relationships.

This year, lawmakers in at least five states — Massachusetts, New York, Oklahoma, Pennsylvania and South Carolina — are considering bills that would encourage or require schools to discuss dating violence prevention with students in middle school or high school. Georgia approved the first such law in 2003, and since then 21 states have followed suit.

Education dollars are tight in most states. But Laila Leigh, managing attorney with Break the Cycle, a national nonprofit focused on the issue, said spending money on classes designed to prevent dating violence is much less expensive than paying for its aftermath.

Domestic violence costs the nation more than $8.3 billion every year, including medical care, mental health services and lost productivity, according to a 2004 study, the most recent available. In comparison, schools can find free class materials online, pay a couple of hundred dollars for curricula, or pay a few thousand dollars for training sessions for teachers.

But research on the effectiveness of prevention programs is spotty, and some state lawmakers are wary of placing another burden on schools.

“I agree with the concept,” he said. “But we are putting so much on our schools.”

Dr. Phyllis Niolon, a CDC behavioral scientist, said the devastating impact — and the prevalence — of violence among romantically involved teens should concern every state.

Teenagers who are abused in romantic relationships are more likely to become heavy smokers or drinkers, be depressed or have suicidal thoughts, and to experience domestic violence as adults, according to a 2013 study. In a survey of adults who had experienced stalking or dating violence as adults, the CDC found that about one in four women and about one in seven men first experienced such violence between 11 and 17 years of age.

When Ortega teaches about dating violence, he tries to knock down gender stereotypes, telling students that men don’t have to be aggressive. And he makes them understand that the abusive behavior they often see dramatized on television could land them in jail.

The Madison Park Business & Art Academy is one of 10 Oakland-area schools involved in “Dating Matters,” a CDC program that teaches students how to detect a troubled relationship — their own or somebody else’s — as well as how to prevent violence, and how to help somebody who has been abused. Students are taught to recognize behavior that is demeaning, controlling, overly jealous, isolating or possessive, such as repeatedly pressuring someone to have sex or checking cellphones, emails or social media accounts without permission.

Ortega and other educators are trained to recognize and understand potentially dangerous teenage relationships. They learn how to listen to and respond to troubled teens, and how to connect the students with help.

The CDC also has helped local health departments to create policies for education programs and has created student-run communications campaigns in which students set up Instagram accounts with messages about healthy relationships and organize events, such as a themed skating event.

It’s very unlikely children are having these conversations at home, Leigh said, so “there is space for educators to step in and offer the prevention education.”

In states such as Pennsylvania and Rhode Island, the grieving parents of teenage girls killed by ex-boyfriends pushed lawmakers to take action.

Many states have modeled their policies on the Lindsay Ann Burke Act in Rhode Island, which passed in 2007 and was the first to require the education in middle and high schools.

Lindsay was killed by her ex-boyfriend in 2005 after repeatedly trying to end their relationship. Her mother Ann, a middle school health teacher at the time, helped the state craft its law. If it had been in place in 2005, she believes it could have saved her daughter’s life.

Rhode Island schools use the “Safe Dates” curriculum, which was created by the Hazelden Foundation using CDC funding and has been proven to help reduce abuse. In the 10-session course, students dramatize dating scenarios and create posters and T-shirts designed to raise awareness. Rhode Island schools also send educational materials home to parents.

“Is it going to change every single kid? Of course not,” Burke said. “But I think, overall, we are making progress.”

But in other states, opposition to dating violence hasn’t translated into similar legislation.

In South Carolina, Alexander is reluctant to impose yet another curriculum requirement on teachers. To earn his support, he said, teen dating violence prevention lessons would have to be integrated into what’s already being taught.

In California, Democratic state Sen. Connie M. Leyva proposed a measure requiring dating violence education in schools. It was eventually altered to encourage such programs, but failed to become law. While focused on teens, the bill would have had far-reaching benefits, she said.