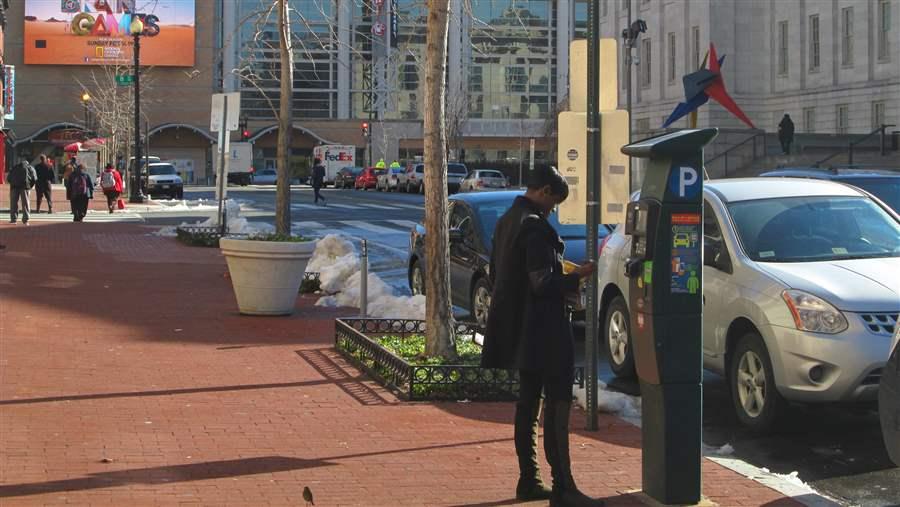 A woman pays for parking in Chinatown, where Washington, D.C., plans to start demand-price parking. A handful of major cities are charging differing hourly rates for street parking in hopes of reducing congestion and spurring the economy.

A handful of major cities across the U.S. are changing how they charge for some of the most valuable property they manage — on-street parking spaces.

Parking spaces haven’t always been seen as valuable by cities, though motorists seeking them in popular commercial areas do. Many cities charge just a few dollars an hour, while motorists circle looking for the spaces, adding to congestion, pollution, and angry and distracted driving.

Now, some major cities are seeking to take advantage of their supply and motorists’ demand with so-called demand-price parking. Rather than charge a flat rate for each spot in every area of the city, they are demanding motorists pay $4, $6 or up to $8 an hour for a spot on a busy street, close to shops and restaurants, while keeping hourly prices lower on less busy streets just a few blocks over.

The cities — Los Angeles, New York, San Francisco and Seattle among them — also can adjust their rates by time of day, cheaper in the morning and higher in the evening, when people are more likely to be shopping and dining. The model is similar to surge pricing used by ride-hailing services like Uber.

Proponents say the goal isn’t to boost parking revenue. It’s designed to encourage turnover, thereby easing congestion and boosting the economy, by having a price that’s high enough on busy streets so that one or two spaces are always available and low enough on nearby streets to entice drivers to park a little farther away and walk a block or two.

In most instances, motorists don’t need to worry about having to carry rolls of quarters with them to plug parking meters. Existing smart meters allow people to pay using their credit cards or smartphones and some systems alert a user’s phone when their time in a space is close to running out. Many cities with demand-price parking also have mobile apps to tell drivers where parking is cheapest and which blocks have spots open.

The switch to demand-price parking doesn’t come without some sticker shock for motorists.

Washington, D.C., is instituting a pilot program this year that would charge as much as $8 an hour in a popular downtown area near its sports arena — a sharp increase over the $2 an hour the city currently charges there.

“The people who can ill afford it are going to be the ones paying $8,” said AAA Mid-Atlantic’s John Townsend, of Washington’s planned pricing.

People who have to work after the city’s subway and bus system shuts down will be the ones hurt by making on-street parking a luxury afforded by few, he said.

Shoup of UCLA does not see it that way. Poor people can save money by parking farther away at lower rates, he said. “Right now, they can’t do that. This will really help low-income people.”

To achieve their ends, cities set various rates. And they can adjust them.

Los Angeles and San Francisco have a maximum hourly rate of $6. Seattle caps it at $4. Washington is authorized to go as high as $8, but has yet to set a top rate. In cities with programs, the hourly parking price may be as low as 50 cents or a dollar on less busy streets.

“The pilot program is to see if there’s price sensitivity,” said Sam Zimbabwe, associate director of planning for the District of Columbia’s Department of Transportation. “It’s not to trap people into paying more than they want to pay.”

The goal is more or less the same in each city: to make sure street parking stays within a certain occupancy rate, usually about 80 percent.

Although some streets will always have occupancy rates above that level, it can be used as a benchmark to help cities decide whether to raise or lower the price, which they can do block by block.

In San Francisco, for example, over two years the prices on busy Chestnut Street increased 75 percent to $3.50 an hour, while one block over on Lombard, prices decreased by 50 percent, to $1 an hour.

“You don’t have to discourage many, just one or two,” said Peer Ghent, with the Los Angeles Department of Transportation. If a few educated consumers head toward cheaper spots and pass on the close ones, “now someone who is willing to pay that can just park instead of cruising.”

Los Angeles and San Francisco review their data every couple of months to set prices to achieve the occupancy rate they seek. Washington plans to assess its pricing quarterly. Seattle does so once a year.

The differing approaches are largely a result of technology. Los Angeles relies on in-ground sensors to assess turnover, and San Francisco uses data from smart meters. Seattle sends people out to count by hand.

“Our program is kind of the low-tech way to achieve similar goals to San Francisco and L.A.,” said Mary Catherine Snyder, parking strategist with the Seattle Department of Transportation. The city places green “value” signs on blocks to direct drivers to a better deal.

The cities that have used demand-price parking have seen a slight drop in the average price of parking within the designated areas and an increase in citywide parking revenue, a change some city parking officials attributed to the improving economy.

In San Francisco, parking revenue went up 7 percentage points higher in the program area than in the rest of the city. Los Angeles also had a slight increase in revenue while the average price of parking went from $1.95 an hour to $1.81 an hour in the designated areas.

Whether demand-price parking has reduced congestion and pollution is still open to question.

Shoup of UCLA said searching for a parking spot can add to pollution. He pointed to a study of a 15-block area on the Upper West Side of Manhattan that found people looking for a street parking spot drove an average of more than a third of a mile before finding one. Within a year that would add up to 366,000 miles and 325 tons of carbon dioxide.

Demand-price parking can reduce unnecessary driving and pollution, he said.

Ghent from Los Angeles said congestion is influenced by so many factors, it’s hard to tell what effect demand-price parking has had in his city.

Other factors, such as placards that allow disabled drivers to park for free, often with no time limit, can make it difficult for the pricing model to achieve its goals.

While many of the placards are used legitimately, some states have turned to various methods of policing who gets the placards to prevent abuse. Michigan, for example, created a two-tier placard system in which only people with severe mobility disabilities would get placards that allow them to park for free.

Shoup said he hopes that more states will follow Michigan’s lead and crack down on handicapped parking abuse — a move he said would allow demand parking systems to work better. “It’s a terrific sand in the gears of the program,” he said.

California Steps Up Efforts to Protect and Restore Eelgrass