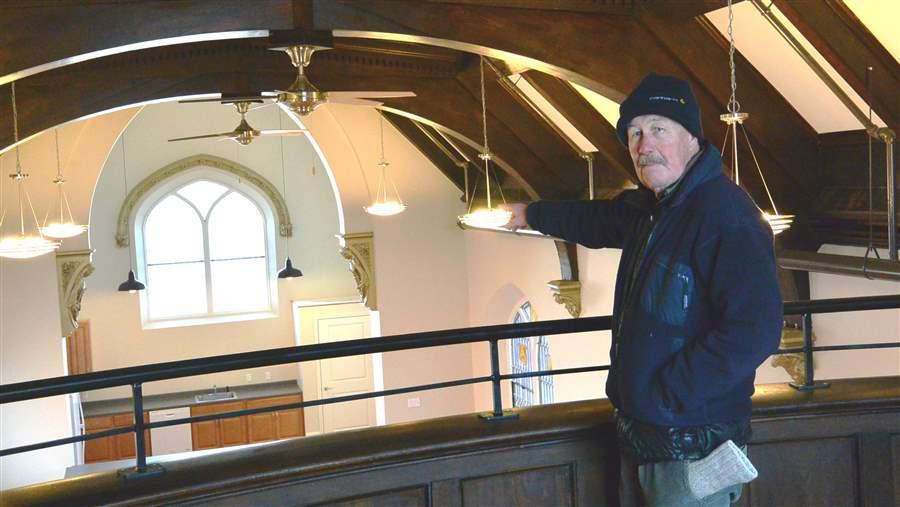 Dave Moore of Holyoke, Massachusetts, who works for a development company reclaiming an old Catholic school, points to the kitchen in a loft apartment created in what was a chapel. Many states are using tax credits to spur the conversion of old churches and schools to commercial use.

HOLYOKE, Massachusetts—In 2002, the regional Catholic diocese decreed that Holyoke Catholic High School, which had operated downtown in this old industrial city for 40 years, would be closed, saying the buildings were unsafe and renovations too costly. Decades of high school alumni, football teams and families wept and railed, but the deed was done.

The school buildings, including a jewel of a chapel, sat vacant and moldering for more than a decade. But now, with the help of the Massachusetts Historic Rehabilitation Tax Credit, federal tax credits and low-income housing tax incentives, the buildings are being turned into sparkling new apartments, with restored stained glass windows, arches and ornate carvings.

“We labored for years trying to find the right use” for the buildings, said Dave Moore, a Holyoke native who works for Weld Management Company, which now owns the buildings. “The [rehabilitation] tax credit put it over the top; we wouldn’t have done it without tax credits.”

The Massachusetts tax credit is similar to programs in 33 other states. The state credits for historic restoration, along with federal credits for historic preservation of up to 20 percent of the cost of the rehabilitation, are bringing once vacant hulks back to life and boosting property values — and tax revenues.

The Massachusetts credit is also 20 percent, allowing developers to subtract 20 percent of the cost of rehabilitating qualified buildings from what they pay in state taxes.

The credits have been used for years, particularly in the Northeast, to repurpose old mills and manufacturing plants into new, income-producing housing or businesses. But the latest trend is to restore and renovate elegant old churches and other religious properties, which often have sat vacant as congregations move, change demographically or — particularly in Roman Catholic dioceses — consolidate.

The lovely buildings present difficulties for architects, however. Turning a chapel into an energy-efficient apartment is tricky and expensive. That’s where the tax credits come in.

States have found that by encouraging developers to restore the old churches, they revive neighborhoods and spur economic growth. While the churches themselves were never on the tax rolls, they give way to new apartments, condos and businesses that pay property or business taxes to cities and towns.

A cost-benefit analysis done for Massachusetts in 2012 by the Urban Land Institute, a nonprofit real estate and land use research organization, found that for every dollar in historic tax credit, the state got an additional $1.20 in tax revenue.

Opponents sometimes argue that turning churches into commercial enterprises is blasphemous, and they worry about limited parking and traffic jams in the old neighborhoods, as well as the number of low-income tenants who might move in. But in almost all cases, redevelopment plans win the approval of city and town authorities and historical commissions.

“These buildings represented Catholic education and all that goes with it — high school friends, memories, the Sisters of St. Joseph who dedicated their lives to the kids,” said the Rev. William Lunney from his office at St. Jerome’s Catholic Church, across the street from the former school.

“People in Holyoke reacted in shock and anger” when the school closed, the priest said. But over time, he said, the buildings deteriorated, there were “stray cats living in there,” and residents were ready for something new at the site. Now, he said, “I’m absolutely delighted [with the rehabilitation]. It’s good for the city, good for the state and good for the parish.”

The Massachusetts credit, renewed in 2014, is part of a trend toward extending and increasing the credits in the states, according to Renee Kuhlman, a public policy specialist at the National Trust for Historic Preservation.

“They have really grown by leaps and bounds,” said Kuhlman, who has tracked state incentives for historic preservation since the 1990s. “There were probably eight [states] in 2000; now it’s up to 34 states.”

Rehabilitating churches has become popular, Kuhlman said, because they are sturdy, architecturally beautiful buildings; are often located in popular core neighborhoods; and can be turned into attractive apartments or restaurants — but only if the tax credits make the restoration and conversion feasible financially.

Texas is indicative of the popularity of the tax breaks. It approved a state historic tax credit in 2013, which spurred interest in the federal credit even before the Texas credit took effect. In 2013, there were 11 Texas applicants for the federal credit, according to Valerie Magolan, tax credit program specialist of the Texas Historical Commission. By 2014, as word of the pending Texas credit spread, 26 federal applications were made by Texas entities, and in 2015, there were 36 applications.

She said Texas is one of several states whose credit is particularly generous because it allows the 25 percent credit to be taken by nonprofits, including churches. Because nonprofits don’t pay taxes, they can sell the credits earned by rehabbing a building to a for-profit entity. “That increases the flexibility of the program,” Magolan said.

Kansas is another state that allows credits for buildings that aren’t turned into income-producing enterprises. The generous Kansas credit of up to 30 percent is available to nonprofit organizations to restore their buildings and may be carried over for 10 years and transferred to another entity.

To qualify for the credits in nearly all the states, buildings must be certified as historic by the National Register of Historic Places or by a state preservation agency or authority. Some states require that the building be of a certain age or be located in a designated historic district. Historical commissions often also require that the renovation plans respect the original architecture.

The Massachusetts program does not allow a developer to get the tax credit if the building is to be turned into individually owned condominiums. But a project in Boston is seeking the credits for turning the St. John the Evangelist Episcopal Church, on historic Beacon Hill, near the State House, into office space and two rental apartments — which would qualify.

“We are big supporters of the [tax credit] act,” said Jim Alexander, a partner in Finegold Alexander Architects, a Boston firm, which is working on the St. John project. “A number of projects have benefitted; otherwise they didn’t make economic sense. That’s particularly true of historic buildings that have been neglected for a while.”

St. John the Evangelist was built in 1831 and is thought to have been designed by Solomon Willard, also the architect of the Bunker Hill Monument in Boston. Preserving the graceful lines and slate gray blocks of the building is important to developers and the state’s historical commissioners, who will decide if the planned building design is allowed.

“The big issue is: how much change can you make in order to make these projects viable and not violate historic guidelines?” Alexander said, noting that his firm would like to put skylights in the roof of the church so that the upper level apartment gets natural light.

While most states have instituted the historic tax credits with little fuss, North Carolina is an exception. As part of a massive tax overhaul in 2014, the state scrapped all tax credits, and allowed the Historic Restoration Tax Credits to sunset at the end of that year.

Republican Gov. Pat McCrory was a defender of the credits, as he had seen them work in Charlotte, where he had been mayor. He asked Susan Kluttz, his secretary of Natural and Cultural Resources, to see about reinstating them.

Kluttz said everywhere she turned, lawmakers said no, because they were determined to eliminate all tax credits and make no exceptions.

She embarked on a six-month tour of the state, visiting every city and town where the tax credits had been used, and got mayors, town managers, preservationists and businesses on her side.

The governor’s office authorized a study to see if there was a better way to encourage restoration of old buildings. But the study found nothing would work as well as the tax credit, Kluttz said.

Most opposition came from conservatives, including the John Locke Foundation, based in North Carolina, which argued that, “There is no justification for compelling state taxpayers to subsidize the preservation of historic properties in particular cities or towns. … Our state government should strive to keep the tax code clean.”

Sarah Curry, director of fiscal policy for the Locke Foundation, said the group doesn’t think the credits should be a state function because cities and towns benefit more than the state, especially from property taxes on the converted structures. “We think it’s more of a local responsibility.”

But Kluttz countered with a report showing that the credits generated $1.6 billion in economic activity, all of which benefitted the state, directly or indirectly.

The North Carolina House late last year passed a bill that reinstates the credits but modifies and caps them. The old law allowed a 20 percent credit on annual state franchise or income taxes. The bill offered a 15 percent tax credit for up to $10 million in qualified expenses. The credit would drop to 10 percent of any additional expenses up to $20 million in total expenditures.

Although the Senate never acted on the bill, the credits as revised by the House were folded into the fiscal 2016 budget bill. McCrory signed the budget and the credits took effect Jan. 1.