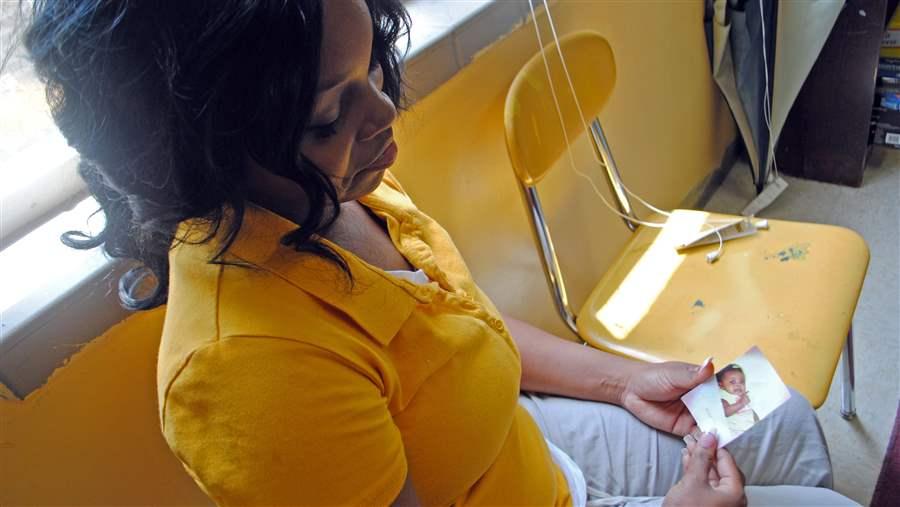 Donyell Hollins, 18, holds a picture of her daughter. Mississippi’s teen birth rate is highest among 18- and 19-year-olds, and the state wants colleges to address it.

JACKSON, Miss. — At 10 a.m. on Wednesday, the 11 students in Carol Jussely’s “Essential College Skills” class were talking about sex.

Crammed into school chairs and clustered in groups of three or four, they leaned together to confer and then shouted out answers to trivia questions like, “Fact or fiction: You can’t get pregnant from having sex in a hot tub.”

Mississippi has among the highest teen-pregnancy rates in the country, and the teens most likely to get pregnant are college-age. So in 2014, the state passed a law that requires public colleges like Hinds Community College here to teach students how to avoid unplanned pregnancies. Arkansas passed a similar law last year.

Lawmakers in both conservative, Bible Belt states have fought for years over whether and how high schools should teach students about sex. Yet the new laws, which affect legal adults, were surprisingly uncontroversial.

And amid a national push to increase the share of Americans who have a postsecondary certificate or degree, other states and college systems are paying attention. Seven percent of community college dropouts leave because of an unplanned pregnancy, according to the American Association of Community Colleges.

Like most community colleges, Hinds doesn’t collect data on why students stop showing up for class, and it’s not clear if unplanned pregnancies are widespread or a major risk factor for dropping out.

But young mothers can be found all over Hinds’ six campuses. As students settled into their seats in Jussely’s classroom, a pony-tailed 21-year-old stood up and grimaced. “He’s kicking,” she said apologetically, putting her hand on her belly.

Doty, also a Republican, joined Bryant’s teen pregnancy task force and started doing research. “I realized that 70 percent of our [teen] pregnancies were 18- and 19-year-olds,” she said. “They may not even think of themselves as teenagers.”

There were 5,644 teen pregnancies in Mississippi in 2012, according to state records, and 3,913 were among older teens. Although the state’s teen pregnancy and birth rates have fallen steeply over the past 20 years, Mississippi’s rates were among the highest in the nation in 2014, according to the nonprofit National Campaign to Prevent Teen and Unplanned Pregnancy.

When teenagers have kids, they and their children often struggle. Teen mothers are less likely to pursue further education and get good jobs, and the children of teenage mothers are more likely to drop out of high school, experience health problems, go to jail and face unemployment as adults, according to the Centers for Disease Control and Prevention.

Yet Mississippi lawmakers have been reluctant to require public schools to teach comprehensive sex education.

“Any time that you talk about sex ed, it seems to be a volatile issue,” Doty said. Mississippi only started requiring high schools to teach such classes in 2011, with a focus on abstinence.

With advice from the National Campaign and the Women’s Foundation of Mississippi, Doty wrote a bill to require colleges to come up with a plan for addressing “the prevention of unintended and unmarried pregnancies among older teens.”

The measure, which Bryant signed into law in March 2014, describes steps colleges could take, from giving students unplanned pregnancy prevention information to working with community health centers. And it suggests that colleges identify barriers single parents face, such as lack of access to child care.

Although Mississippi’s law doesn’t limit the discussion to abstinence, it didn’t ruffle many feathers.

Arkansas — which also has a high pregnancy rate among older teens — passed a similar law in 2015, and it didn’t stir much controversy there, either.

Doty noted that a lot of college students, particularly at community colleges, can be in their late 20s or 30s.

And many lawmakers consider unplanned pregnancy, at the college level, to be a workforce issue. “This is all about college retention,” said Republican state Rep. Robin Lundstrum, a co-sponsor of the Arkansas bill.

Most governors, including Arkansas Gov. Asa Hutchinson, a Republican, want more residents to earn postsecondary credentials that will prepare them for high-skilled jobs.

“We’ve got to get students to stay in school and finish their degree or certificate or whatever program they’re in, because we want them to be contributing members of society, we want them to be successful, we want the incomes in Arkansas to go up,” said Angela Lasiter of the Arkansas Department of Higher Education.

Delen Lee Jr., a 28-year-old who attends Hinds’ Jackson campus, knows how hard it is to stay in school when you have a new baby at home. “I want to be there for the mother of my child,” Lee said. For a while that meant nights spent filling bottles for his son, on top of working as a dishwasher and going to class. Overwhelmed, he took last semester off.

In a way, the Mississippi and Arkansas laws extend services public colleges and universities already provide, like teaching students about sexual harassment.

Community colleges have historically paid less attention to students’ health than residential four-year colleges. At the University of Mississippi, for example, students can head to the campus health center to be tested for sexually transmitted diseases and get birth control prescriptions. Hinds can’t afford that kind of on-campus amenity.

Hinds began working on its pregnancy prevention and sexual health initiative before Mississippi passed its law, thanks to a small grant from the National Campaign. The initiative, branded “Back Off Baby, I’m in School,” uses materials and strategies developed by the nonprofit.

Mississippi lawmakers appropriated $250,000 for college unplanned pregnancy prevention efforts in 2015. Hinds has mostly spent its portion of the state funds on promotional materials and faculty stipends, according to Mary Lee McDaniel, the head of counseling and testing.

McDaniel arrived in Jussely’s cinderblock-walled classroom last week with a PowerPoint presentation full of trivia questions and a basket of chocolate chip cookies decorated with Back Off Baby tags. The trivia contest’s winning team got pens emblazoned with the Back Off Baby logo.

Teachers like Jussely have received $250 stipends to come up with lessons that incorporate family planning. The ideas range from the obvious — using teen pregnancy statistics in a statistics class — to the creative, such as teaching the scientific method by asking students to test the strength of different brands of condoms.

Hinds also requires students to take online lessons on unplanned pregnancy prevention during orientation; includes Back off Baby information at campus health fairs; and invites officials from the Health Department to campus to talk about safe use of contraceptives. Hinds’ rural Utica, Mississippi, campus is planning seminars this month on healthy relationships and communicating with someone you’re dating.

Daphine Ndishabandi, an 18-year-old freshman at the Utica campus, said she’s learned pretty much everything she knows about sex and its dangers from the Bible and Back off Baby.

“I think it’s really cool,” she said of the initiative. “Because being away from home, you don’t really have that mother to give you advice.” (Unlike most community colleges, Utica is a residential campus; about 80 percent of its students live in dorms, according to McDaniel.)

What Do Students Need?

Although Hinds has partnered with the state Health Department, access to health care remains a challenge. To buy condoms, students on the Utica campus would have to drive to the Dollar General store, 3 miles away.

Mississippi didn’t expand Medicaid under the Affordable Care Act, so many community college students across the state lack health insurance. Mississippi does offer family planning services to low-income residents, but many people don’t know that, said Jamie Bardwell, deputy director of the Women’s Foundation of Mississippi.

And while a focus on colleges helps further state workforce goals, colleges may not be the best place to reach 18- and 19-year-olds at risk of an accidental pregnancy. “For sure, the most high-risk population, most likely in the deepest poverty, are not going to be in college,” Bardwell said.

That said, community colleges like Hinds serve a range of students, including high school students earning college credits and young adults studying for their GED. And the Mississippi and Arkansas laws encourage colleges and student groups to reach out to local K-12 schools.

Jussely said that in her remedial class, it’s not unusual for her to teach students who dropped out of high school because of a pregnancy.

After the trivia contest, McDaniel and a visiting Stateline reporter got the students talking. Of the 11 students — all African-American — two were pregnant. One had a baby at home. (The mother and soon-to-be mothers were all on the winning trivia team.)

An older student said some women get pregnant to prevent their partners from leaving. A pregnant 22-year-old said most people in exclusive relationships don’t use condoms because they trust each other.

Everyone seemed to know someone who had dropped out of high school or college because of a baby. The 22-year-old said she planned to stay enrolled once she’d had her child. After her first baby was born prematurely and died, she and her husband spent a year trying to conceive again, she said.

About 10 percent of female community college students in Mississippi plan to have a child while they’re in college, according to a 2014 survey of about 550 women commissioned by the Women’s Foundation. Forty-six percent don’t use birth control or contraception.

After the students took their cookies and trooped out, Jussely and McDaniel talked about the Back off Baby exercise. Jussely said, emphatically: “You need the program in the high school.”