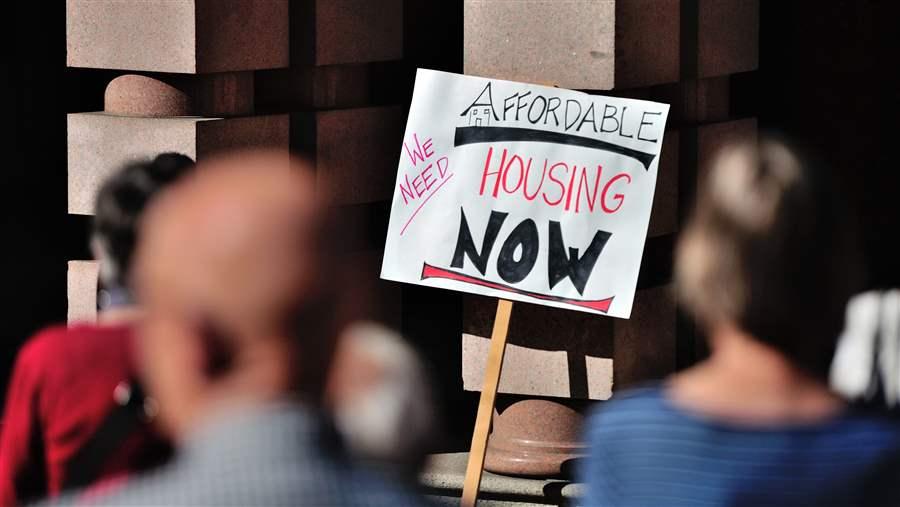 A group rallies for affordable housing outside City Hall in Portland, Oregon. States and cities are looking for ways to ease the housing crunch.

This story was updated to reflect the proper name of the Minnesota Housing Partnership.

In Roseau, Minnesota, there are good-paying jobs at the Polaris snowmobile factory. But a dearth of moderately priced housing means there are few places for the company’s managers and engineers to live.

Without more affordable housing, Polaris will have trouble growing in this northern Minnesota city of 2,600. The company won’t disappear, said Todd Peterson, a community development coordinator in Roseau, but it cannot add new jobs without more housing, and is likely to expand elsewhere.

“We’re competing as a community to say we’re a viable place for Polaris to do business, but we can’t provide housing for the people they need to work,” he said. “That’s a hard sell.”

As affordable housing vanishes for low- and middle-income Americans, lawmakers in Minnesota and other states are being forced to look for ways to encourage new construction and ease a housing crunch that increasingly eats up more of people’s income.

Legislation in California would impose a fee on real estate transactions that could generate between $300 million and $500 million annually to support the state’s affordable housing, redevelopment and homeownership programs. And in Minnesota, lawmakers are being urged to authorize state income tax credits that could be used by developers in places like Roseau.

The country’s lowest earners are increasingly at risk because the private sector cannot meet their need for housing without government aid, said Chris Herbert, director for Harvard’s Joint Center for Housing Studies.

On top of that, he said, a housing shortage for people with moderate salaries threatens to drive the middle class from cities and dampen local economies.

“Where can any private developer build, own and operate and charge only $500 in rent and be able to make a go of it?” Herbert said. “We have to think of ways that public subsidies can close the gaps.”

Cause of the Crisis

Stagnant federal funding for low-income housing programs; the lingering effects of the Great Recession, when millions lost their homes to foreclosure; and growing income disparity have left many states and cities with an influx of people in search of affordable homes.

Rents rose by as much as 7 percent between 2001 and 2014, according to the Harvard Center’s study on rental housing. In that time, wages also fell by as much as 9 percent, squeezing Americans’ budgets.

This has affected the three-quarters of low-income people who qualify for — but do not receive — most types of federal housing assistance, as well as middle-class Americans.

Herbert’s team found that more than 80 percent of renters who earn $15,000 or less spend over 30 percent of their income on housing and are considered “cost burdened.” More than two-thirds of renters in that income range spend more than half.

Sixteen states give tax credits to developers who build affordable housing; most have some sort of housing trust fund for low-income housing supported by real estate taxes.

But housing advocates say states and cities need to do more to ease the housing crunch, such as finding new ways to finance construction or demanding that developers price some of their new apartment units below market value.

Some have been responding in novel ways. In Portland, Oregon, where the mayor declared a housing state of emergency in the fall, the city has gone to a source of the housing scarcity to help finance new housing: the sharing economy.

Kurt Creager, director of the city’s housing bureau, estimates between 800 and 1,000 units of affordable housing have been taken out of the Portland rental market because owners are using homes and apartments for short-term, hotel-style rentals through websites like Airbnb.

So the city established a transient lodging tax that charges 11.5 percent per Airbnb reservation and funnels that money into a housing trust fund that can be used for land acquisition and other capital costs. The tax has raised $1.2 million for housing projects since 2014, he said.

In October, the city also increased the share of certain property taxes that goes to affordable housing programs. The move is expected to generate $68 million.

Some cities and states, such as New Jersey and Massachusetts, require developers to price some new units below market rates through inclusionary zoning policies.

But others, such as Oregon and Texas, prohibit the practice, although lawmakers in Oregon plan to introduce legislation this year to reverse that state’s law.

In Tennessee, state lawmakers similarly want to block officials in Nashville and other cities from passing inclusionary zoning measures. One of them, Republican Rep. Glen Casada, said that if there is a need for affordable housing, it will naturally be met as a result of market forces.

“I have found that any time the government mandates anything, it drives up the price and makes that resource more scarce,” he said.

Instead, he said, local governments should lower taxes, fees and requirements on homebuilders to ensure affordable housing stays on the market, he said.

But officials in Montgomery County, Maryland, say inclusionary zoning programs work. The county has the country’s oldest inclusionary zoning law, which was established in 1974 and requires that 12.5 percent of new housing developments be affordable.

The county, home to about a million people just outside Washington, D.C., has established 12,500 affordable housing units since the program was created. Most of the units are no longer covered by the zoning law, but about 5,000 are still required to be priced affordably, said Stephanie Killian, who manages the program.

“It prevents concentrations of poverty,” she said. “It allows access to housing for people who work here and live here.”

Some cities, such as Seattle, have sought rent controls that prevent landlords from raising rents in exorbitant fashion. But those efforts ran up against opposition at the state level and have gone nowhere.

Housing hardship is commonly found in big cities with high costs of living. But rural Minnesota has experienced a crisis in towns like Roseau, with big manufacturers in place and little investment in housing.

The towns have grown with businesses, hospitals and schools, but the rental housing markets have not responded with homes for people making enough money to afford middle-priced units, said Chip Halbach, director of the Minnesota Housing Partnership, an advocacy group.

Developers are unwilling to commit to these towns, Halbach said. “They’re saying this is just too risky, even though the company can show these people wanting to move in.”

Housing advocates worry these small towns will suffer economically because companies will eventually want to relocate to bigger markets where workers can secure housing, he said.

Last year, the Minnesota Legislature created a workforce housing grant program to pay for housing for workers in rural areas. To make sure the homes serve moderate-income earners, the lawmakers stipulated that the money could not be put toward projects required to have low-cost units.

There’s also a push for the Legislature to create a state tax credit to support building more housing for workers in towns like Roseau.

The proposal, spearheaded by the nonprofit Greater Minnesota Partnership, would authorize state income tax credits that could be used by developers who build housing in those towns. The idea, Halbach said, is that companies will buy into housing projects to guarantee homes for their employees and get the tax credits.