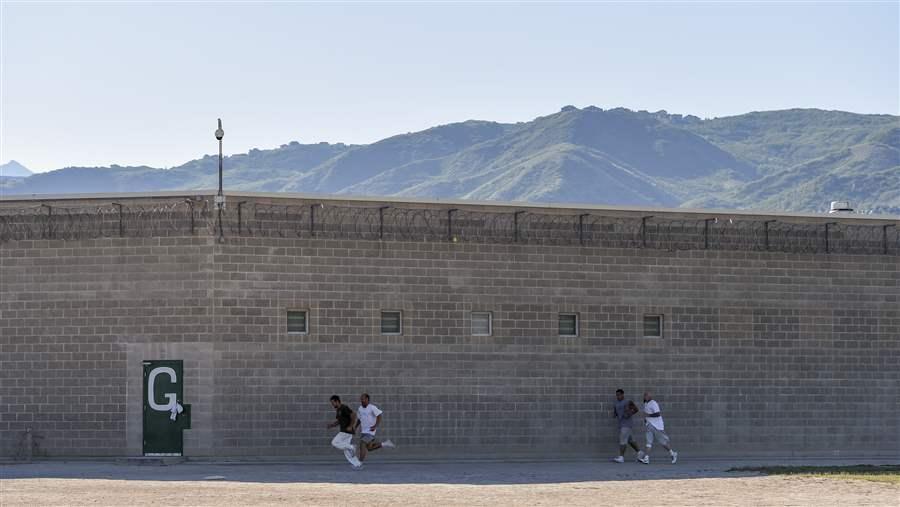 Prisoners run for exercise at a state prison in Utah. Many states are looking at new ways to reduce their prison population.

After two decades of “tough on crime” policies, many states are taking a hard look at the way people are charged, how much time they serve, and what happens when they are released from prison.

While bills governing the use of body cameras and other police-related measures are likely to be considered this year, many states are looking at growing prison populations, obstacles to drug treatment, and high recidivism rates as reasons to re-evaluate their criminal justice systems.

The U.S. has the highest incarceration rate in the world, and many states are at a crossroads, weighing whether to build new prisons or change how they sentence people as well as how they guide them through parole and probation.

Several states, including Alaska, Maryland and Rhode Island, are considering sweeping criminal justice changes that would ease some of the punitive policies of the 1980s and ’90s, especially when it comes to drug offenders. In some places, lawmakers will consider recommendations made by criminal justice task forces, often with the guidance of outside groups such as the Council of State Governments (CSG) and The Pew Charitable Trusts (Pew also funds Stateline).

“If there’s a theme or common denominator, it is policymakers asking what the science says will work,” said Michael Thompson, director of the CSG’s Justice Center. “The question they’re asking is, ‘Can we get a better return on our investment?’ ”

States that want to decrease the number of people going to prison often turn to reducing sentences, either by scrapping mandatory minimums or reclassifying some felonies as misdemeanors. They may also divert people into treatment for drug addiction or mental illness.

Nicole Porter with the Sentencing Project, which advocates for shorter sentences, said when states do reclassify crimes, it tends to be lower level felonies, such as drug possession and property crimes like theft under a certain dollar value.

Porter said some states may be inspired by what California voters did in 2014, approving Proposition 47, which reduced some felonies, such as nonviolent property theft and drug crimes, to misdemeanors.

Not only did the state decrease the number of people going into prison, but thousands of inmates were eligible to be released early under the new law. As of September, nearly 4,500 people were released under Prop. 47. And the state’s Department of Corrections estimates 3,300 fewer people will be incarcerated each year.

Holly Harris with U.S. Justice Action Network, a coalition of liberal and conservative groups pushing for criminal justice changes, said reducing felonies to misdemeanors could have a big impact on women. Though they are the fastest growing segment of prison population, many women are nonviolent offenders or are serving time for drug crimes that might be reclassified.

In Alaska, the state’s Criminal Justice Commission in December called for limiting prison beds to serious and violent offenders, reclassifying many of the lowest level misdemeanors as violations punishable by a fine, and shortening jail time for more serious misdemeanors to no more than 30 days. The panel also called for changing simple possession of heroin, methamphetamine and cocaine to a misdemeanor.

But states that are adjusting sentences aren’t just shortening them. Last year, Maine legislators reduced sentences for some drug possession crimes, but increased them for cocaine and fentanyl powder, one of the opioids that have concerned state leaders as they battle heroin addiction.

“The dichotomy feels like legislators have a split personality,” said Alison Holcomb, director of the American Civil Liberties Union’s Campaign for Smart Justice, which lobbied against the increased sentences in Maine. Holcomb said while attitudes around some drugs have relaxed, some states that are trying to crack down on the abuse of opiates have imposed harsher sentences.

But reducing sentences could have unintended consequences. In Utah, state Rep. Eric Hutchings, a Republican, said the reclassification of some crimes as misdemeanors blocked some people from drug courts and treatment programs meant only for felons — something he said the state will fix this year.

Many states may also consider ending some mandatory minimum sentences, which have helped to swell prison populations in several states. Iowa Attorney General Tom Miller, a Democrat, said he wants the Legislature to eliminate mandatory minimums for less serious crimes, which under current law can land someone behind bars for decades.

Bills in several states, including Florida, Massachusetts and Virginia, would either scrap mandatory minimums or give judges more power to depart from them when issuing sentences. Last year, Maryland, North Dakota and Oklahoma gave judges more discretion to exempt some people from mandatory minimums, according to Alison Lawrence with the National Conference of State Legislatures.

Changes to Parole and Probation

States are also looking to get people who are already in the criminal justice system out faster and to help them transition back into society while on parole.

One option is “presumptive parole,” which means presuming that inmates are eligible for parole, rather than requiring them to convince the parole board they should be released, an approach Mississippi adopted in 2015. Michigan’s House is currently weighing the policy, something the state’s Department of Corrections estimates will free up enough beds to save the state $82 million a year.

“It puts the burden on the state to show a compelling reason why you should not be released on parole,” Harris said.

Some states are trying to make their parole process more responsive to parolees’ behavior.

Several states, including Alabama and Utah, have adopted “swift, certain, fair” approaches, which aim to provide an immediate response to parolees’ behavior, whether it’s jail time after a failed drug test or a reduced parole term if someone has been following the rules and  making a lot of progress in post-prison life.

Hutchings said Utah legislators passed such a measure last year after examining the recidivism rates of parolees. One-third were back in prison because they had committed new crimes, but two-thirds were there for parole violations.

People need a quick, clear response when they do something wrong in order to change their behavior, Hutchings said, but the state was taking too long to get people in front of a judge when they violated parole — and they were often sent back to prison for too long.

“These are not people we’re afraid of. They’re just people who are not doing what they said they were going to do,” he said. “It’s kind of like the game Chutes and Ladders. You get your stuff together but then one slip-up and you’re back at the beginning. Even if you just get sent back to jail for 60 days, you don’t show up for work so you lose your job. You can’t make your car payments so it gets repo’ed. You go all the way back to zero.”

The state adapted one of its facilities to include a special section for parolees and probationers, giving them access to drug treatment, therapy, and their parole or probation officer. Officers can also order parolees and probationers to sleep at the center for a few nights, to make sure they stay out of trouble, or to be locked up for up to five days — or even longer with a judge’s approval.

Michigan state Sen. John Proos, a Republican, said he wants to expand his state’s “swift and certain” program, which now operates only in some counties. He’d also like the state to open it up to probationers.

But he also wants to understand why prison doesn’t better prepare inmates for parole. “Do we need more education? Do we need more resources?” he asked.

Several states already provide some resources, including substance abuse and mental health treatment, before people even go to prison.

Maryland’s working group on criminal justice reform found the state spends about $26 a day to incarcerate one person, versus $4.55 per person for probation and parole. To reduce the number of people entering prison, the group proposed starting a grant program to cover the county costs of specialty courts and re-entry programs.

Some states are likely to consider ways to remove some of the barriers that make it difficult for people to make a life for themselves once they get out of prison.

Each year, several states take up “ban the box” legislation, which blocks employers from asking on job applications whether someone has served time. The idea is that if employers have a chance to get to know applicants before finding out about a criminal past, they are more likely to give them a second chance.

While 19 states have some sort of ban the box policy, sometimes it only applies to the state or its contractors, but not private employers. Arkansas state Sen. Jeremy Hutchinson, a Republican and the chairman of the Senate Judiciary Committee, said he expects the state to consider such a policy this year, but he’s not sure how far he wants to go.

“There’s a lot of hesitancy, even on my part, to dictate to employers what should be on their job application, but the state can be a model,” he said.

States are also likely to consider laws that allow for the expungement or sealing of records, or certificates of rehabilitation, which allow a state to vouch for the good reputation of people who have been convicted of crimes and served their time.

This month, the Kentucky House voted to let people convicted of most Class D felonies — the lowest level of felony, punishable by one to five years in prison — erase their criminal records and get a second chance at jobs, housing and other opportunities sometimes denied felons.

Some states are also reevaluating their juvenile justice systems and trying to open them to an older population, prompted in part by new brain science which suggests cognitive abilities are not fully formed until age 25.

In New York, after failing to change the state’s status as one of the few where 16- and 17-year-olds are automatically tried as adults, Democratic Gov. Andrew Cuomo issued an executive order in December requiring that young prisoners be housed separately from older inmates — an idea that has been talked about in other states as well.