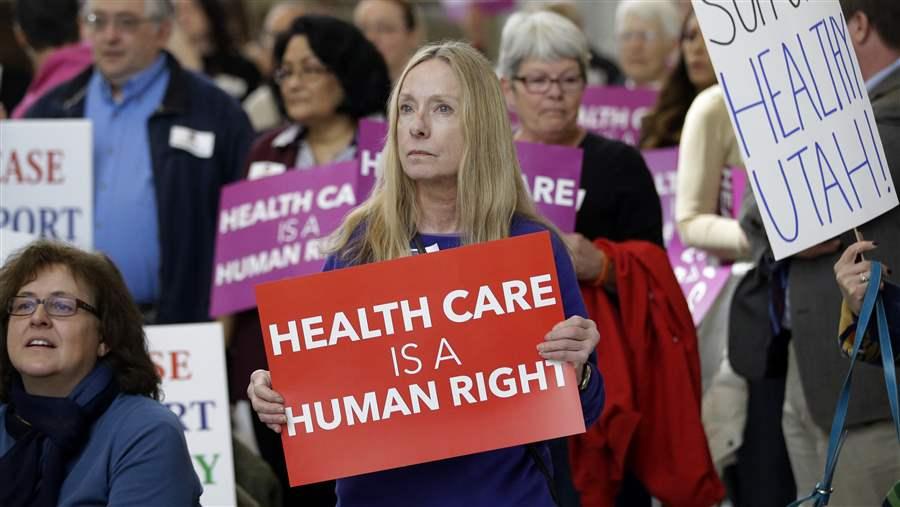 Supporters of Republican Gov. Gary Herbert's Medicaid expansion plan rally at the Utah State Capitol. Legislators rejected his plan last year. This year, Herbert and other proponents of expansion may wait out the presidential election before pushing the issue again.

The map, Medicaid Expansion 2016, has been corrected to reflect Wisconsin as a "Not Expanding Medicaid" state.

Louisiana this month became the first state in the Deep South to make the politically charged decision to expand Medicaid health insurance to low-income adults under the Affordable Care Act.

At least one other state — South Dakota — is expected to extend Medicaid coverage this year. But in the lead up to the November presidential election, supporters of the ACA aren’t holding out much hope that more states will join in extending Medicaid coverage to more people — although the governors of Alabama, Virginia and Wyoming say they want to, as do key legislators in Maine and Nebraska.

Meanwhile, newly elected Republican Gov. Matt Bevin in Kentucky and Republican lawmakers in Arkansas are threatening to roll back or modify their states’ existing expansion programs.

After a new president is elected, the situation could change and more states could join in expanding coverage, predicted Joan Alker, executive director of Georgetown University’s Center for Children and Families, which advocates for greater health care coverage for the poor.

Ever since the Supreme Court’s 2012 decision making Medicaid expansion a state option, the issue has been more political than practical. Many Republican governors and lawmakers have rejected the deal, fearing they would lose their jobs if they were seen cooperating with President Barack Obama on a law most conservatives abhor.

With Obama out of office, that could change. “The ideological opposition to the president will have to start fading when he’s out of office,” Alker said. “At that point, the facts and the evidence will start to matter more.”

Matt Salo, executive director of the National Association of Medicaid Directors, agrees. If a Democrat is elected president, the new administration could be expected to continue the Obama administration’s approach of approving proposals from Republican-governed states to shape expanded Medicaid programs to fit their individual state needs and politics.

Even greater flexibility could come if a Republican is elected president, Salo said. In that case, the GOP-led states that have so far shunned expansion would likely seek authority to revamp their programs more radically than the Obama administration has allowed. Until then, Salo said, “Governors are probably thinking, ‘Maybe I’ll just keep my powder dry.’ ”

Congress voted 60 times on repealing the ACA before successfully passing legislation earlier this month to undermine the law and phase out Medicaid expansion. Obama vetoed it. Would a newly elected Republican president instead sign it and eliminate health coverage now extended to millions more poor people? Most analysts doubt it and predict expansion will endure, even if other parts of the ACA are changed.

Hard to Take Back

So far, 31 states and the District of Columbia have taken the federal government up on its offer to fund all but a fraction of the cost of providing health care to about 8 million low-income adults not previously eligible for the federal-state program. Of them, 10 states were run by Republican governors at the time of expansion. 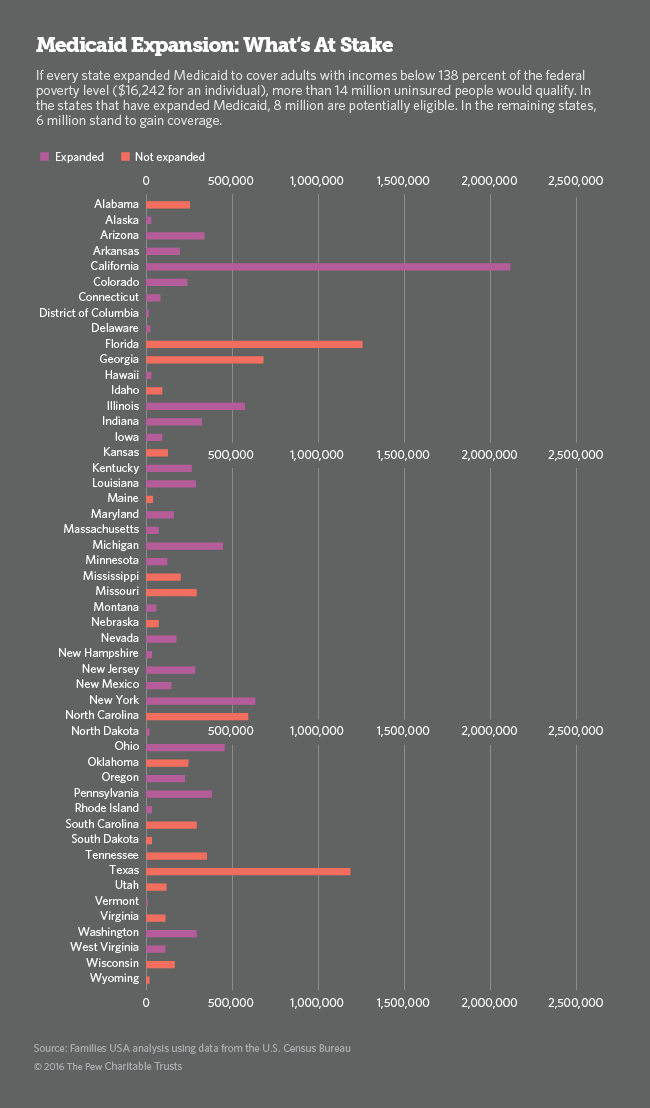 Defunding or eliminating Medicaid expansion would mean taking away billions of federal dollars from the states and their ability to provide health care for their residents. It also would mean cancelling health coverage for millions of people, many of whom could be sick and in need of immediate care. That’s not something any administration is likely to do, Salo said.

For similar reasons, it will be difficult for Arkansas and Kentucky to roll back their Medicaid coverage. Kentucky’s Bevin promised during his fall campaign to dismantle the state’s Medicaid expansion, which is among the nation’s most successful at reducing the uninsured rate and cutting state health care costs.

But in December, Bevin changed his mind and announced he would not eliminate the expansion, but instead transform the way Medicaid is delivered. Without providing details, Bevin said a new system would be in place by the beginning of 2017.

In Arkansas, Republican Gov. Asa Hutchinson, who was elected in 2014, has supported the state’s expansion, but said he was willing to make changes to the program to satisfy critics in the GOP-dominated Legislature. Because of Arkansas unique requirement that at least 75 percent of lawmakers must approve any appropriation and its conservative legislative majority, the future of the state’s Medicaid expansion has been shaky from the start.

Under the Medicaid expansion, the federal government pays the full price of covering newly eligible adults with incomes up to 138 percent of the federal poverty level ($16,242) through 2016 and then gradually lowers its share to 90 percent in 2020 and beyond. 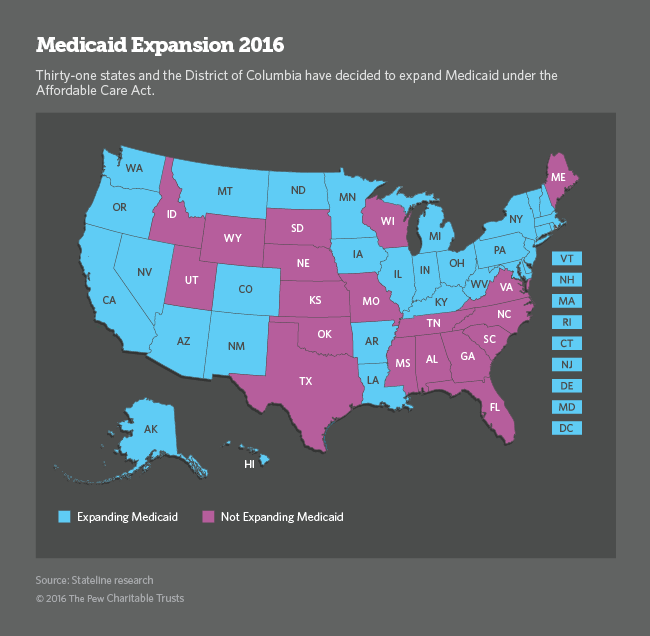 Opponents of expansion in the states say they fear the 10 percent share states will have to pay will burden their budgets over the long run and force them to neglect other priorities. They also argue the federal government can’t afford higher Medicaid costs and could eventually renege on its promise to pay 90 percent of the bill.

To entice more states to expand, President Obama asked Congress in his 2017 budget proposal this month to allow states to get a full three years of 100 percent federal funding if they take up the option this year or next. The Republican-controlled Congress is not expected to approve the proposal.

The states have sought approval for a combination of changes that would allow Medicaid enrollees to purchase private policies on a state exchange, while requiring them to pay small copayments and premiums, engage in healthy behavior, seek employment and, in Indiana’s case, contribute to a health savings account. The federal government has approved most requests, but has drawn a line at allowing states to cancel a Medicaid enrollee’s policy for failure to meet any of the requirements.

Some Republican-led states want to go further. Salo predicted that Texas, for example, might ask a Republican president’s administration for permission to operate an expanded Medicaid program much like a block grant, in which the federal government provides the money and the state sets most of the rules.

The Issue Won’t Go Away

After replacing Republican Bobby Jindal this month as governor of Louisiana, Democrat John Bel Edwards signed an executive order extending Medicaid to nearly 300,000 poor residents effective July 1. So far, the Republican-led Legislature has not pushed back.

Governors in four other states — Alaska, Kentucky, Ohio and West Virginia — have approved Medicaid expansion without legislative consent. In Ohio it was Republican Gov. John Kasich, a presidential candidate.

In South Dakota, second-term Republican Gov. Dennis Daugaard is asking the GOP Legislature to approve extending Medicaid to as many as 55,000 poor residents, including Native Americans. His proposal, which is contingent on federal approval, would for the first time allow Medicaid coverage for Indian health services both on and off the reservation.

In Virginia, Democratic Gov. Terry McAuliffe is seeking expansion. So is Republican Gov. Matt Mead in Wyoming. But their Republican legislatures have rejected it before and are likely to again. Alabama Republican Gov. Robert Bentley has declared support for expansion but is not expected to push the GOP-dominated Legislature to approve it this year.

Republican Govs. Gary Herbert of Utah and Bill Haslam of Tennessee pushed for it last year but ran into opposition from their Republican legislatures — an obstacle that remains this year.

In some states, the opposition shoe is on the other foot. In Nebraska, a bipartisan bill was introduced last week that would expand Medicaid using the so-called “private option” pioneered by Arkansas, in which newly eligible beneficiaries would receive private insurance on the exchange rather than under the existing Medicaid plan. So far, Republican Gov. Pete Ricketts has opposed expansion.

In Maine, two Republican senators — Roger Katz and Tom Saviello — have sponsored a bill to extend Medicaid. But Republican Gov. Paul LePage, who already has already vetoed five attempts to enact Medicaid expansion, vowed to do it again.

Research shows that major fiscal and health benefits have accrued to states that have expanded Medicaid, and contrary to claims from opponents, job losses have not occurred. Hospitals also reported fewer unreimbursed expenses.

A study published in the journal Health Affairs this month concluded that more patients got care for chronic illnesses and fewer residents said they skipped medications or had problems paying medical bills in states that expanded, compared to nearby non-expansion states.

More than 6 million more people would become eligible to receive coverage under the health law’s Medicaid expansion if all remaining states opt in to the program, according to an analysis by Families USA, which advocates for expansion. But states like Florida and Texas, with the highest uninsured rates and the most to gain, continue to reject federal funding.

Historically, health care has been a bipartisan issue, George Mason University professor of health economics Len Nichols said. And it could be again.

“Once Obama is gone, it’s not ‘Obamacare’ anymore,” Nichols said. “It’s American law.” At that point, he said, it will be hard for any state to reject a deal that is “good for their budget, good for their economy and good for the health of their residents.”