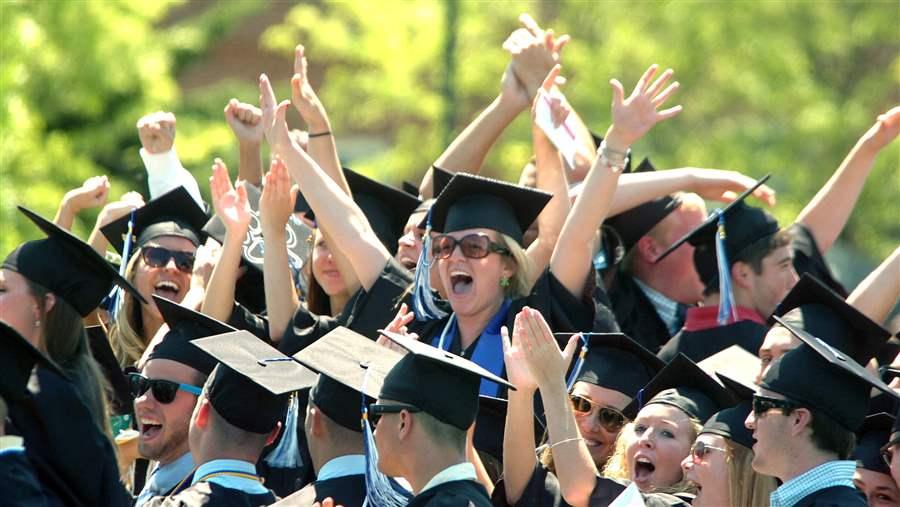 University of New Hampshire graduates cheer at commencement. Tuition at public universities like UNH has risen beyond the reach of many middle-class families.

Students who applied early to the University of New Hampshire will know by the end of the month if they were accepted. Then many would-be Wildcats will start biting their nails, waiting for their financial aid letter. Four years’ tuition and fees at UNH can put families back over $67,000 — roughly what the typical New Hampshire household earns in a year.

The university’s high prices are an extreme example of rising college costs that have affected students in every state. Paying for college has become a financial strain on middle-class families across the country, and a source of anxiety for recent graduates saddled with student debt.

This election year, Democrats, in particular, want to rally voters behind their plans to make college more affordable. UNH — a flagship university in a state that votes early in the presidential primaries — has become a key stop on the campaign trail. “No student should have to borrow to pay tuition at a public college or university,” Hillary Clinton said at an event there in the fall.

But while the presidential candidates debate major new investments in public higher education, states will spend 2016 pursuing a more modest agenda. States only have limited funds to work with, even as many lawmakers say they want college to be more affordable and states aim to increase the share of residents who hold a postsecondary degree or certificate.

“The pressure on higher ed budgets is going to continue. So the question is, how do states navigate that?” said Andrew Kelly, director of the Center on Higher Education Reform at the American Enterprise Institute (AEI), a right-leaning think tank in Washington, D.C.

Rather than blockbuster new investments, expect 2016 to bring tuition freezes, tweaks to scholarship programs, and policies that push institutions to do more with existing funding. Even ambitious-sounding changes, such as eliminating tuition for community college students, likely will be targeted to limit state spending.

One way for states to bring down tuition is simply to spend more money on colleges and universities.

Public colleges are still a bargain compared to private alternatives, thanks to state subsidies. In-state tuition and fees at four-year publics averaged $9,139 in 2014, according to the nonprofit College Board. Combined tuition, fees, room and board charges were less than half the price of the average private nonprofit college. And students who receive federal, state or institution grants pay less.

But since the 1980s, states have steadily cut per-student higher education funding and institutions have steadily raised tuition to compensate. New Hampshire’s cuts have been particularly severe. In 2015, state funding comprised 9 percent of the university system’s budget, down from 16 percent in 2003, according to UNH data.

Now, few students nationwide can afford college without help from grants and loans. Eighty-three percent of full-time students at public four-year colleges received financial aid in 2012, according to the most recent data from the National Center for Education Statistics.

Washington state proved last year that tuition can go down if states spend enough money. The state increased higher education funding so much that tuition at public institutions dropped by 5 percent. As Stateline has reported, Washington’s public universities will reduce tuition even more this year.

But few other states have the money — or the inclination — to make that kind of investment.

“My guess is that with other compelling needs, it’s going to be hard to make the case for higher education to get more money” in 2016, Burton said, just as it was during the 2015 session.

Neighboring Massachusetts also faces a tight budget. There, Democratic state Sen. Michael Moore would like to increase higher education and scholarship funding by $137 million over five years. But, he said, “It’s going to be very difficult.” Massachusetts officials expect state tax revenue to grow by about 4 percent in the next fiscal year and Moore’s proposal will have to compete with rising health care and labor costs, he said.

States have been reinvesting in higher education since the recession ended. But states still spent less per student in 2014 than they did in 2008, according to the most recent data from the State Higher Education Executive Officers Association. That’s partly because enrollment shot up during the recession, when many people struggled to find work.

Many states committed to spending additional money in the current fiscal year, said Tom Harnisch of the American Association of State Colleges and Universities. Often, he said, the money was conditional on colleges freezing tuition or limiting tuition growth.

Wisconsin was a notable exception. There, Republican Gov. Scott Walker signed a budget that froze in-state tuition at the University of Wisconsin even as the state cut funding.

In Idaho, Republican Gov. C.L. “Butch” Otter has proposed a variation on the tuition freeze: A guarantee that students at four-year colleges and universities would pay a fixed tuition rate each year for four years. Otter has indicated that students would have to study full-time; additional qualifying criteria may emerge as lawmakers discuss the idea this session, according to Jon Hanian, Otter’s press secretary.

States also can make college more affordable by targeting their spending at students, rather than institutions. States are likely to focus on need-based scholarships in 2016, said Kristin Conklin of HCM Strategists, a consulting firm that works with states on higher education issues.

By investing more in scholarships and tweaking them so they reach different kinds of students, states can further their workforce goals, Conklin said.

Take Arkansas. Last fall, Republican Gov. Asa Hutchinson announced that he wants 60 percent of state residents to hold a postsecondary credential by 2020. Officials say jobs in the state will increasingly require advanced technical training. Arkansas is one of 33 states that have partnered with Complete College America, a high-profile nonprofit that’s working with states to raise college completion rates.

To reach Hutchinson’s goal, Arkansas will have to educate more people from demographics that currently don’t enroll and finish college at high rates: working adults, low-income students, and African-American and Hispanic students. The state’s plan includes shifting scholarship money away from merit-based aid (which typically rewards middle-class students) and toward financial need.

Tennessee, which has set a similar workforce goal, has created scholarships that make community college tuition-free for recent high school grads and some adults who want to go to technical college. Both programs pay tuition not covered by other federal and state grants (some students who receive federal Pell grants can already go to community college for free).

Oregon followed Tennessee’s lead and established a free community college scholarship for recent high school grads last year. There, Democratic state Sen. Mark Hass said he pitched the program as a way for the state to save money over the long run, because education can help young people find good jobs and escape poverty.

“I think there’s probably a dozen, at least, states that are looking at some sort of legislation to do exactly what Oregon and Tennessee are doing,” Hass said. He should know: he sits on a national advisory board President Barack Obama established last fall to spread the free community college idea.

But as existing programs show, states aren’t likely to make community college free for everybody. Both Oregon and Tennessee limited their costs by targeting certain students. Oregon’s legislators budgeted $10 million for the program’s first year and $20 million for its second, Hass said. But the funding may not be enough to meet demand.

Moore said it would cost Massachusetts $127 million to make community college free for all students, citing a report from the nonprofit Massachusetts Budget and Policy Center.

“For us to even think about doing this, we would definitely need federal support,” Moore said. President Obama proposed creating a federally funded free community college program last January, and promoted the idea again during his 2016 State of the Union address, but the proposal hasn’t gotten much traction in Congress.

The third — and most difficult — way states can make college more affordable is by bringing down the cost of educating students.

AEI’s Kelly said he worries that upping state spending just shifts the cost of college from families to the government, without forcing institutions to become more efficient.

Tuition freezes, after all, don’t hold tuition down over the long term. They only tend to last for a year or two, and they don’t address the forces that push up the cost of running a university — from inflation to administration costs to labor costs to students’ demand for expensive amenities.

The California Legislative Analyst’s Office argued against a tuition freeze that Democratic Gov. Jerry Brown proposed in his 2013-14 budget by explaining that extended tuition freezes at the state’s colleges and universities have been followed by periods of steep tuition increases.

“The proposal also would have the limited near-term effect of reducing the incentive students and their families have to hold higher education institutions accountable for keeping costs low and maintaining quality,” the report said. (The University of California and California State University systems froze tuition in 2013-14, but in 2014 UC announced a plan to raise tuition).

To hold down costs and further their workforce goals, a growing number of states are changing the way they distribute higher education funding. Twenty-six states now at least partly fund colleges and universities based on performance measures, such as whether students graduated on time, and 10 more states are developing such funding formulas, according to an HCM Strategists report.

Massachusetts, Oregon and Tennessee have embraced outcomes-based funding, and Arkansas plans to implement the approach.

Wisconsin’s Gov. Walker said in his State of the State address this month that he plans to talk to the University of Wisconsin system about creating three-year bachelor’s degrees, and expanding an online university degree option that lets students proceed at their own pace. He also wants to increase grant money for technical college students, and provide students with more information about the loans they’re accruing.

New Hampshire’s Burton said he hopes workforce concerns and demographic change will persuade his colleagues in the General Court to focus on the high cost of higher education.

New Hampshire announced a partnership with Complete College America last month. A business group, the New Hampshire Coalition of Business and Education, is pushing for the state to set a college completion goal. And the University of Maine has begun competing with other New England institutions on price, by announcing that it will charge area students the same tuition and fees they’d pay in their home states, rather than the higher rate usually charged to out-of-state students.

All these factors — plus the election-year spotlight — should create space for a debate about college affordability, Burton said, even in New Hampshire’s tough budget environment. “It’s going to be a much more serious discussion.”