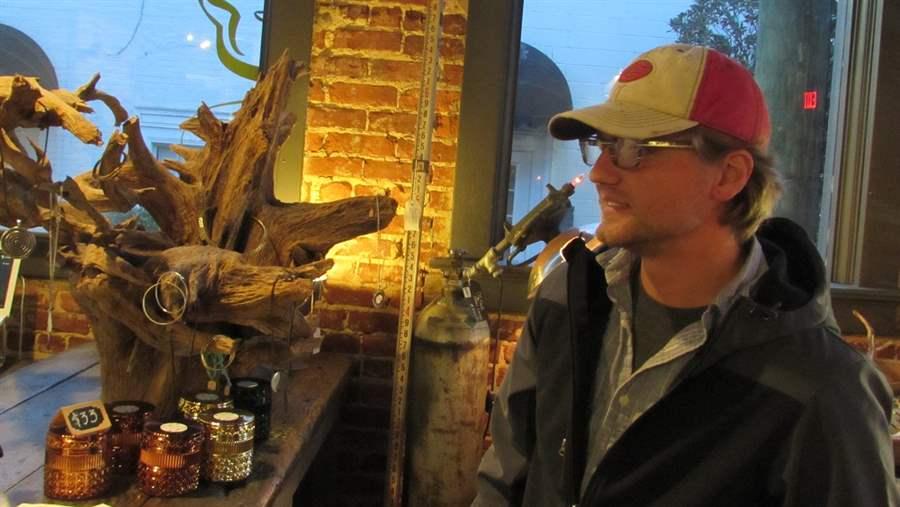 Joseph Roberts at the salon and spa he runs with his wife in Conyers, Georgia. Conyers is in Rockdale County, which has had the nation’s largest drop in median income since 2000.

ROCKDALE COUNTY — This Georgia suburb, about 23 miles southeast of downtown Atlanta, has been buffeted by the broader economic troubles the U.S. has experienced since 2000.

Rockdale County businesses produce disposable cups and pizza boxes, walk-in coolers and pre-fabricated gas stations. But since the turn of the century, the number of manufacturing jobs in the county has declined by 27 percent, according to the latest County Business Patterns report produced by the U.S. Census Bureau. Now more Rockdale residents have lower-paying jobs in health care, retail, hotels and restaurants — and they are falling behind.

At first, the housing boom of the early to mid-2000s prevented the manufacturing losses from having a major impact on Rockdale’s median household income. Then the housing bubble burst. By 2014, median income in Rockdale was $48,287, a third less than it was in 2000 after adjusting for inflation.

Rockdale’s troubles have been extreme — no other U.S. county has experienced such a steep income drop since 2000 — but it isn’t alone in its travails. In more than one-third of the nation’s counties, the inflation-adjusted median income has dropped by 10 percent or more since 2000, according to a Stateline analysis of the Small Area Income and Poverty Estimates from the Census Bureau.

In many of them, the drop in income can be traced to the disappearance of manufacturing jobs. In 57 percent of the U.S. counties classified as “manufacturing-dependent” in 2000 by the U.S. Department of Agriculture, median income dropped by 10 percent or more. Just 25 percent of other counties experienced a decline that dramatic.

More than three-quarters of the counties in Michigan, Indiana, Georgia and South Carolina experienced median income declines of 10 percent or more. In Hawaii, North Dakota, Rhode Island and Wyoming, there were no counties in that category.

The 10 counties with the biggest drops include many known for manufacturing, including counties around Detroit and Flint in Michigan, and North Carolina’s Wilkes County, which lost textile and furniture manufacturing jobs. Five of the 10 counties are in Georgia, around Atlanta and Macon.

Nine of the 10 counties where income increased the most — 45 percent or more in inflation-adjusted dollars — are in North Dakota, beneficiary of an oil boom. (The data don’t reflect changes after oil prices started dropping in 2014.) Six more in the top 20 were in oil-rich regions of Texas, such as Midland County, and neighboring New Mexico.

Statewide, Georgia has lost more than a third of its manufacturing jobs since 2000, when that sector was the largest employer. Today more people work for lower average pay in stores, health care, hotels and restaurants — sectors that now employ more Georgia residents than manufacturing.

Despite the loss of manufacturing jobs, Rockdale County’s median income grew between 2000 and 2008, thanks in large part to the housing boom, which supported high-paying jobs in construction and banking and in factories making building materials. Rockdale also benefited from an influx of commuters priced out of closer suburbs.

The housing boom helped many areas of the country that lost manufacturing jobs, according to a 2013 study by the National Bureau of Economic Research.

Georgia as a whole did especially well during the housing boom because much of its manufacturing was housing-related, according to Jeff Humphreys, director of the Selig Center for Economic Growth at the University of Georgia. During the boom the state’s factories were busy churning out windows, flooring and carpets.

The bursting of the housing bubble devastated those industries. It also left Rockdale and counties like it littered with foreclosed houses and vacant lots. Even now, many houses in Rockdale are selling for less than what it cost to build them, and new construction has ceased.

The developer of one subdivision laid out streets and sidewalks, but there are no houses on the hundreds of small lots — just pipes for water and sewer service. Marty Jones, Rockdale County’s director of economic development, calls such subdivisions “pipe farms.”

Jones said another developer had borrowed money, but nobody ever bought anything from him. “He was going to sell lots for $100,000 and people were going to build $800,000 houses. He didn’t sell a single lot. The crash happened and he didn’t have a chance.”

Other Rockdale homes have been turned into rental units for Atlanta-area residents seeking better schools and a more serene lifestyle than they can find nearer the city. Many of the newcomers have relatively low incomes, another reason why the county’s median income has declined. Since 2000, the county’s poverty rate has doubled to 17 percent.

The decline in household income and property values has had a substantial impact on Rockdale’s schools and city and county governments. Public employees have not received raises for years. School enrollment is up, as more families with children have moved in, and class sizes have increased. Police are responding to more 911 calls than ever, and have had to cancel community programs to get more officers on the street.

County government, the city of Conyers, and schools are all “trying to do more with less,” Jones said. “For these governments, everything they buy is costing them more and they’re trying to run everything on the same revenue stream they had.”

Gerald Sanders, chief of staff for the Rockdale County Board of Commissioners, said property values are creeping up again, which should bring in more property tax revenue. But it will be years before they return to pre-bust levels.

But Rockdale boosters see signs of hope. Many of the local factories have remained open, even as they have trimmed their workforces. The county’s unemployment rate, which peaked at 11 percent in 2010, is down to about 7 percent (in 2000 it was 3 percent). Georgia has used tax incentives to attract new employers and retain existing ones, and manufacturing jobs in Rockdale and Georgia as a whole have rebounded from 2010 lows.

“Across the board everybody is hiring or trying to hire right now,” Jones said. “They all cut back to the bone in 2007, 2008. Now they’re coming back, they say the demand is there, they’re at 100 percent capacity, and they just need more space.”

Competition Clutch, a high-end automotive parts maker, just bought three buildings on Old Covington Highway, the old highway to Atlanta. And Acuity Brands, which manufactures commercial lighting, recently moved into a new complex and plans to hire 500 more people in the next five years in Rockdale.

But Rockdale County is hedging its bets by working to attract other kinds of employers, such as television and movie producers who use old factory space for set construction. They’re also trying to lure Atlanta millennials and entrepreneurs like Joseph and Alli Roberts, who came to Conyers to start a family and now employ 20 people in their Main Street salon. The county helped them find a larger building.

“I always say I’m not moving any further out and I’m not living any further in,” Joseph Roberts said. “I can live here, and if I want to go to dinner or a concert in Atlanta, I can drive 22 minutes and then drive right back here and leave my front door unlocked.”