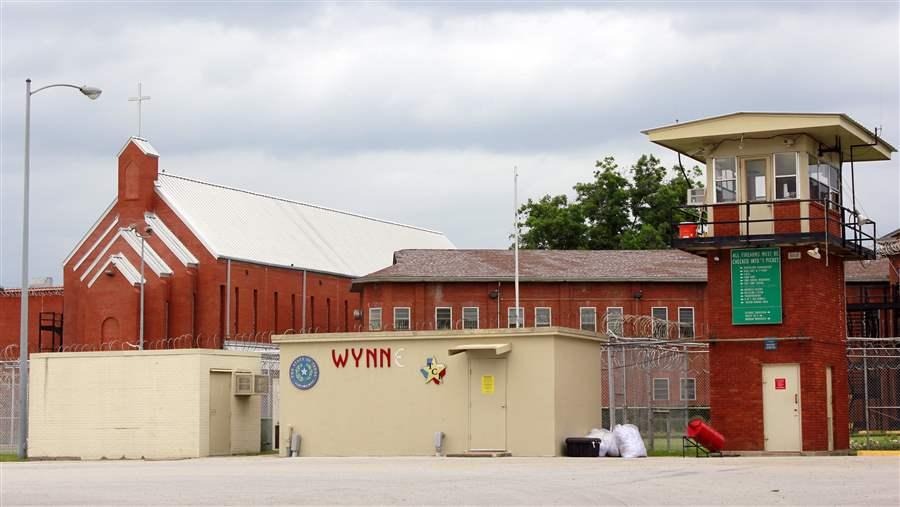 The John M. Wynne Unit in Huntsville is one of many Texas correctional facilities that use telemedicine to treat inmates. States increasingly have adopted telemedicine in prisons to save money, improve inmates’ health, and lessen the risk of taking prisoners to outside hospitals.

CONROE, Texas — Texas prison psychiatrist Pradan Nathan recalls an unsettling face-to-face session with a dissatisfied patient about a dozen years ago at a maximum security prison in East Texas. The large man, a member of a notorious prison gang, insisted Nathan prescribe him a particular medication. Nathan said he didn’t need it.

“I’m going to stab you to death the next time you come in here,” the prisoner growled.

Nathan feels a lot safer these days. He sees up to 16 patients a day from a suburban Houston office here, using an audio console, a camera and a monitor to treat inmates at two state prisons — including one with a death row — at least 30 miles from where he sits. He’s still threatened occasionally, but now it’s from a comforting distance. Needless to say, he’s a big fan of telemedicine.

He’s not the only one. Most states have turned to telemedicine to some extent for treating prisoners — often in remote areas, where many prisons are located — because it allows doctors to examine them from a safe distance. It enables corrections officers keep potentially dangerous inmates behind bars for treatment rather than bearing the cost and security risk of transporting them to hospitals. And because more doctors are willing to participate, it makes health care more available for inmates.

Though some prisons used telemedicine as early as the 1980s, its use has dramatically increased with the arrival of vastly improved technology, electronic medical records, and pressure to control ever rising medical costs.

“Telemedicine is perfectly designed for prisons,” said Marc Stern, a former assistant secretary for health services for the Washington State Department of Corrections who now consults with corrections systems on telemedicine.

How much telemedicine saves states is hard to tell because it’s difficult to calculate the costs of transportation and extra security if prisoners have to be sent outside prison walls for medical care.

Texas has the nation’s largest prison population, with about 153,000 inmates, and, according to a Pew Charitable Trusts report, spent $3,805 per prisoner on medical care in 2011, compared to a national average $6,047. (Pew also funds Stateline.)

And few states use telemedicine as much as Texas. UTMB’s prisoner health operation conducts 127,000 telemedicine visits a year with inmates in the 83 Texas correctional facilities it tends to. About three-quarters of the visits are for mental health or primary care. (All behavioral health care is handled via telemedicine, as is about 20 percent of primary care appointments, and between 5 and 10 percent of specialist visits.)

Texas lawmakers support telemedicine in prisons, Murray said, even though the financial savings are hard to pinpoint. In addition to adding to public safety, he said, telemedicine speeds inmates’ care, which in turn helps improve their health. It also helps apply the same standard of care over a wide geographic expanse.

Despite its growth, telemedicine faces the same hurdle to widespread use in prisons as it does in the general population: All states still require that doctors treating a patient in a particular state be licensed in that state, including those practicing digitally from elsewhere.

Advocates for prisoners have mixed views of the use of telemedicine in corrections. Bradley Brockman, director of the nonprofit Center for Prisoner Health and Human Rights, called it “a godsend and a real gift because prisoners are getting care from providers or specialists that they would have far less chance of getting otherwise.”

But David Fathi, director of the American Civil Liberties Union’s National Prison Project, said that while telemedicine can improve health access, too often it is used to cover over inadequate medical staffing in prisons. “Because telemedicine is less expensive, there is a tendency to use it excessively and inappropriately,” Fathi said. “It is used not as a supplement for on-site staff but as a substitute for on-site staff.”

Florida was the first to experiment with telemedicine in prison, introducing it in state prisons in the late 1980s. But the technology was primitive.

When Texas started using it in prisons in the early 1990s, for example, the audiovisual equipment and slow frame speeds produced poor visuals that doctors found insufficient for diagnosis and treatment. Ear, nose and throat doctors would say, “I can’t see anything; just send the patient to the hospital,” Murray recalled.

Young doctors in the correctional system, however, saw its potential, Murray said. And since then, the equipment has improved dramatically and its price has come down.

A standard telemedicine unit — including a small audio console, a camera that can zoom in and out, and a monitor — costs less than $2,000, Murray said. The UTMB prison health operation has about 200 units, about three-quarters of which have a stethoscope and an otoscope for looking inside ears, and can transmit images and readings. That capability adds about $8,000 to a unit’s price.

During telemedicine exams, a nurse or aide is often on hand at the prisoner’s end. Sometimes there is a primary care doctor who can confer with sub-specialists and other doctors working from Galveston, site of a regional prison hospital.

Because Texas prisons have electronic medical records, doctors are able to see a patient’s record on one side of the screen and the patient on the other.

A few doors down from Murray’s UTMB office in Conroe, which is about 30 miles north of Houston, is Michelle Munch, a pharmacist. She confers with as many as 30 patients a day in prisons across the state about their medication. If they are suffering any side effects, she can modify their prescriptions.

“I can see a patient in Huntsville and then in a matter of minutes, another patient in San Antonio,” she said. Those cities are nearly a four-hour drive apart.

Nathan, the psychiatrist, is downstairs from Munch. In his sessions with patients, he routinely has to determine how inmates are handling their psychiatric medications, including antipsychotic drugs. He watches a patient’s expression, and looks for signs of involuntary motor movement or evidence that the patient is responding to stimuli that aren’t there. In the early days of Texas’s telemedicine experiment, he said, the equipment provided blurry, herky-jerky images, which were useless for his purposes.

Not anymore. The imaging is now perfect, Nathan said — better, in fact, than being in the same room because of the cameras’ zoom capability. “Plus, I don’t feel threatened at all.” He seldom sees patients face-to-face these days.

About 30 miles up Interstate 45 from Conroe is the Estelle Unit, home to about 2,600 prisoners. There, Dave Khurana works as a nephrologist, specializing in kidney care. He sees dialysis patients or those who soon will need dialysis. He has face-to-face sessions with patients at Estelle and meets remotely with inmates at distant prisons.

Sometimes Khurana uses telemedicine to see patients from his home, or when he has to be in Conroe for meetings, or even from his car. Last year, he did medical rounds while in Australia with his wife to attend a wedding.

A few months ago, Khurana said, he was in Conroe when a nurse back at Estelle spotted something suspicious on the arm of a patient about to have his dialysis treatment. From 30 miles away, Khurana was able to zoom in a camera on the patient’s bicep and identify a dime-sized ulcer. Proceeding with the dialysis, Khurana realized, could have ruptured a blood vessel.

“We could have had a bloodbath right there,” Khurana said. Instead, he ordered the patient transferred to a hospital, where an infection was discovered beneath the ulcer. He needed surgery before he could safely undergo another round of dialysis. “We avoided possible death, stroke or heart attack.”

Without telemedicine, inmates might have to travel long distances to see doctors. Many doctors — particularly specialists and sub-specialists — often do not want to live in isolated areas; many have little interest in venturing to faraway prisons. That’s why in Texas and other states, correctional health officials often locate telemedicine facilities in or near cities, where doctors prefer to live.

Overcoming distance was Wyoming’s primary motivation for adopting telemedicine in the late 2000s, particularly for mental health. “We started because we couldn’t find psychiatrists to fill our part-time jobs,” said Laura McKinnon, the Wyoming mental health director for Corizon, a private contractor that handles correctional health for the state. A lone psychiatrist often had to travel from one prison to another as far as five hours apart. During winter that often was along treacherous roads.

Today, Wyoming officials say, the state conducts about 440 telemedicine appointments with prisoners a year, with about half of them for behavioral health issues. All five state prisons are equipped with telemedicine equipment.

Louisiana officials say they conduct about 3,500 telemedicine visits a year in 9 state facilities and 14 local jails. Raman Singh, medical and mental health director of the state’s Department of Corrections, credits telemedicine with opening the pipeline to specialists once out of reach for prisons. “Telemedicine opens a whole world to you because it helps recruit specialists who don’t want to travel, let alone walk into a prison,” Singh said.

Many prisoners also appreciate telemedicine, said Liz Mestas, support services manager for clinical services in the Colorado Department of Corrections, which uses telemedicine at nine of its prisons.

Prisoners also appreciate not waiting for medical appointments, she said. The department said it doesn’t quantify the number of telemedicine appointments.

But Brockman, of the Center for Prisoner Health and Human Rights, said telemedicine doesn’t solve what he says are frequent problems in prisons of not responding to inmates’ requests for medical attention in the first place or providing adequate follow-up care. “The hope and prayer is that the savings realized from telemedicine will be spent for better diagnostic care, better access to medication, better therapeutic services,” Brockman said.

Fathi, of the ACLU, said too often, doctors practicing telemedicine on inmates don’t have their full medical histories. That was a federal court’s finding in a recent lawsuit concerning prison health care in Arizona penitentiaries. One provision of the court-approved settlement in the case requires that mental health providers practicing telemedicine on prisoners be provided with their recent medical records, including laboratory results.

“Telemedicine does offer some positives but it is never going to be as good as having an on-site physician who can perform hands-on diagnosis and treatment,” Fathi said.

Stern, of Washington state, said it is important that doctors who use telemedicine make occasional visits to prisons — if for no other reason than to develop an appreciation for the unique world occupied by their patients.

“You have to get a flavor for how a prison operates, what is the food like, what is the noise level, how attentive is the staff, how high or low are the bunks,” Stern said. “Occasionally, you have to walk through in order to understand that peculiar environment.”