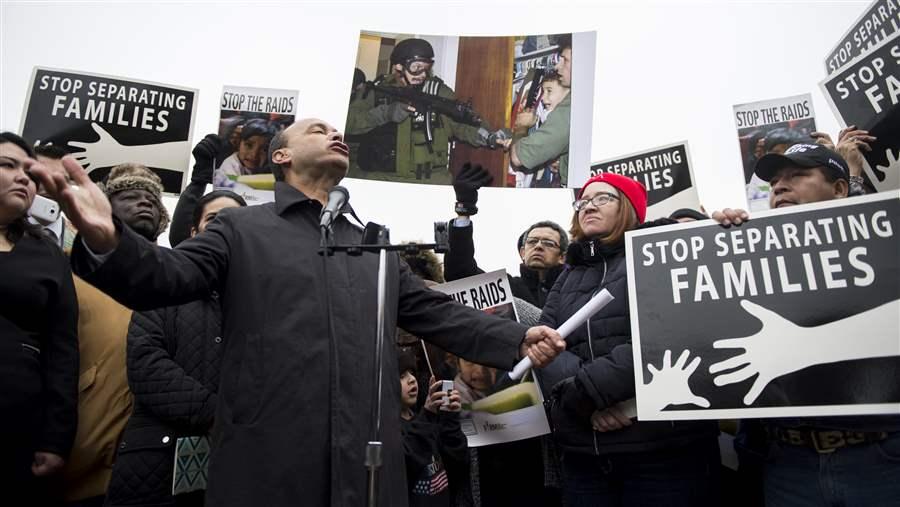 U.S. Rep. Luis Gutiérrez, D-Ill., holds a news conference in front of the White House to voice opposition to the recent immigration raids by the Obama administration.

Carmen was sleeping when they came for her and her two children. It was early Saturday morning, Jan. 2, and about a dozen federal immigration officials banged on her parents’ door in Atlanta. The 27-year-old single mother from El Salvador said she had just enough time to throw on some clothes over her pajamas.

Carmen, who illegally crossed the Mexico-Texas border with her children in June 2014, was shocked when the officials said they were deporting her right away. She was in the midst of an appeals process — and even had a court appointment for that Monday — in a bid to stay.

“I asked them, ‘Why are you sending me back to my country where it’s so dangerous? I could be killed,’ ” she said from a detention center in Dilley, Texas, where she is being held with her children, ages 6 and 8. (She asked that her real name not be used for fear of compromising her case.)

The mother and her two children are among 121 people — mostly women and children from Guatemala, Honduras and Mexico — who were rounded up early this month, in raids primarily in Georgia, North Carolina and Texas amid growing fears that the U.S. faces a surge of illegal unaccompanied minors fleeing violence in Central America comparable to 2014. So far 77 have been deported.

The deportation raids have sparked fear in U.S. immigrant communities and highlight the wide confusion and political division among federal, state and local authorities on how the nation should deal with as many as 11 million undocumented immigrants, most of whom entered the country illegally across the southern border.

The Democratic mayors of Philadelphia and New Haven, Connecticut, last week said they would not cooperate with the deportation efforts. The Democratic New York City Council announced that city agencies would not report undocumented people to federal authorities.

In Maryland, the Democratic executive in Montgomery County said local police wouldn’t cooperate in any raids. And Prince George’s County urged federal officials not to round up children in schools or people in stores, social service agencies or county buildings.

Meanwhile, in Texas, Republican Gov. Greg Abbott last month extended the 18-month mission of National Guard troops along the border in response to a rise in the number of unaccompanied minors crossing the Rio Bravo.

And the U.S. Supreme Court said Tuesday it will hear a case involving President Barack Obama’s 2014 order that would have provided protection to as many as 4.9 million undocumented immigrants — an order that has been stayed while a lawsuit works its way through the courts.

Texas and 25 other mostly Republican states filed the suit against the order, while dozens of mostly Democratic cities, the National League of Cities and the U.S. Conference of Mayors have backed the order in court briefs.

At the same time U.S. Immigration and Customs Enforcement (ICE) agents are carrying out the raids, the Obama administration is building temporary shelters to house unaccompanied immigrant children in Colorado, Florida and New Mexico.

The shelters will house up to 2,200 children for on average 32 days each and will provide schooling for them until they are placed with sponsor families. Under federal law, unaccompanied children must be transferred out of detention centers within 72 hours.

The federal government “doesn’t want to get caught the way they did in 2014,” said Marc Rosenblum, who is leaving his position at the Migration Policy Institute to become deputy assistant secretary of Homeland Security and director of the Office of Immigration Statistics. “They want to give relief to people who have valid claims while enforcing their borders.”

Either way, he said, it’s a dilemma with no easy solutions. “It’s a tough policy problem.”

White House spokesman Josh Earnest said the raids begun last month are intended as deterrence, by discouraging people from attempting “the dangerous journey from Central America to the southwest border.”

They have targeted families who had illegally crossed the border after May 1, 2014, and who had exhausted their legal options for staying, ICE said. The families will be held in detention centers for processing and then flown back to their home countries.

But some defiant local officials say the raids have created a public safety crisis. Parents, they say, are keeping their children home from school and skipping doctor’s appointments. Whole families, they say, are hiding out in their homes, too frightened to go to the grocery store — or to talk to the police.

“This is having a severe impact on the immigrant community itself,” said Maryland state Del. Ana Sol-Gutiérrez, a Democrat. “They are very much afraid of what ICE raids can do to their families. The community is panicked.”

In announcing local police wouldn’t cooperate in the deportation effort, Montgomery County Executive Ike Leggett said, “We want all of our community members to know that they are free to go about their daily life, to go to schools and work, social service agencies, hospitals and medical clinics.

“If you have reason to need help from our police, do not be afraid to call on them.”

The raids come amid a rise in illegal crossings at the border, where last fall thousands of families and unaccompanied children fleeing gang violence, drought and poverty in El Salvador, Guatemala and Honduras, slipped under the fence.

The rise — more than 17,000 between October and December, compared to nearly 8,000 during the same period the previous year — has stoked fears that the nation will experience a surge like the one it witnessed in 2014, when roughly 69,000 children swarmed the border, creating a crisis in U.S. detention facilities and overwhelming states and municipalities.

“Right now, we’re on pace to have more families and unaccompanied minors arrive in fiscal year 2016 than in 2014,” Rosenblum said.

Once they cross, they end up in every state. How they are treated can depend on which one they go to.

California, Florida, New York, Texas and the Washington, D.C., region that includes Maryland and Virginia have the largest numbers of unaccompanied children.

California threw open its doors. In 2014, Gov. Jerry Brown, a Democrat, signed into law a bill allocating $3 million in legal aid for Central American children. That same year, then-Maryland Gov. Martin O’Malley, a Democrat, sought to house the children in foster homes rather than in group shelters and pushed to have them treated as refugees.

But other states made it clear the children were not welcome. Iowa Gov. Terry Branstad, a Republican, said in 2014 he did not want the children sent to his state because it would encourage others to cross the border illegally. Meanwhile, then-Nebraska Gov. Dave Heineman, a Republican, protested that the federal government had sent 200 children to his state without consulting him.

Today, the raids are happening in cities and states that have some of the toughest immigration courts, said Amy Fischer, policy director for RAICES, a Texas-based organization that is providing pro bono legal aid to immigrants in the deportation centers.

For example, she said, “very, very few people get granted asylum in Atlanta.”

Other regions, such as the Washington, D.C., area, have courts that tend to be more immigrant-friendly, Fischer said. It’s also easier for immigrants there to find a lawyer, she said.

U.S. Justice Department statistics back that up. In Atlanta, only 1 percent of asylum requests were granted in 2014, compared to 71 percent in Arlington, Virginia, and 84 percent in New York City.

As Carmen found out, Atlanta wasn’t the best place to arrive undocumented, after fleeing her home and job as a cosmetologist in El Salvador in the face of gang violence in the summer of 2014.

She was apprehended at the Texas border, where she applied for asylum and was ordered to wear an ankle bracelet to track her whereabouts. From there, she went to Atlanta, to be with her parents and brothers and sisters. She said she never missed a court appearance. But in October, a judge ordered her deported.

Carmen was awaiting a decision on her appeal when ICE knocked on her door and hauled her off. Now, she said, she is working with her pro bono lawyers and praying for good news. “I hope God lets me stay,” she said.