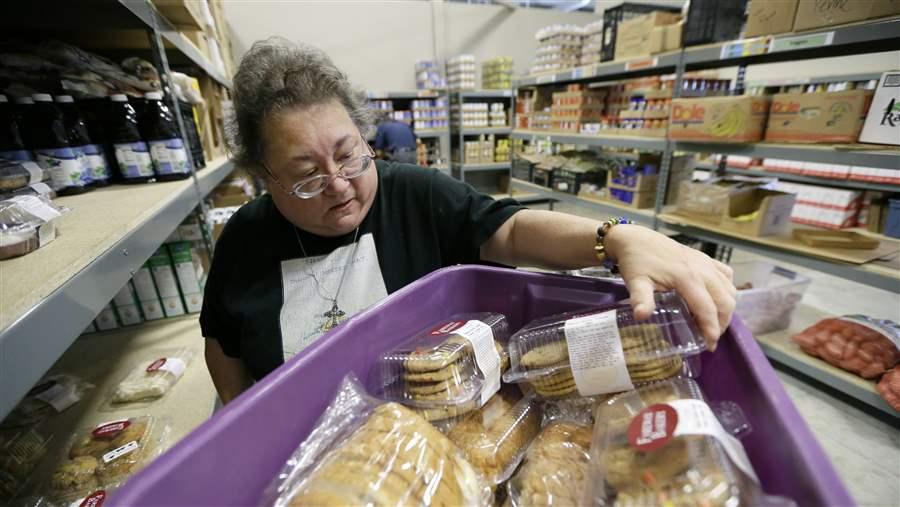 When Milwaukee resident Linda Hopgood found out last summer she was about to lose her food stamp benefits, she immediately started looking for work. But she said she quickly became discouraged by employers telling her she did not have the skills they were looking for.

The 48-year-old former nursing aide has been out of work for four years. She lives in her son’s house and spends her days watching her daughter’s three children. Without the $187 in food stamps she had received each month for the last seven years, she’s now walking to church every day for free meals.

Hopgood lost her benefits when Wisconsin reinstated work requirements for food stamps. With 22 new states reinstating the requirements as of Jan. 1, another 500,000 or more people could find themselves in her situation by spring.

The reinstated requirements are only for able-bodied adults between the ages of 18 and 49 who have no young children living with them. If they do not work 80 hours per month, or take part in 80 hours of a qualified job-training or educational program, they can only receive food stamp benefits for three months out of every three years.

The federal government suspended the work requirements on those food stamp recipients nationwide in 2009, when jobs disappeared and unemployment rates shot up during the Great Recession. Over time, as their economies have improved, states have had to reinstate the work requirements.

Now, all but seven states — California, Illinois, Louisiana, Michigan, Nevada, Rhode Island and South Carolina — and the District of Columbia have work requirements for able-bodied adults without dependents in at least part of the state. For work requirements to be waived, unemployment must be higher than 10 percent, or states must prove a lack of jobs.

Some governors have not sought permission to forgo the requirements, despite high unemployment rates. For instance, this year, Mississippi (6.6 percent), New Mexico (6.2 percent) and West Virginia (7 percent) could have applied but didn’t, said Ed Bolen, senior policy analyst at the left-leaning Center on Budget and Policy Priorities (CBPP).

And South Carolina (6.7 percent) only sought permission to forgo the requirements until March.

States also can seek federal permission to waive the requirements only in areas that continue to lack jobs. But many of them haven’t.

Wisconsin, for instance, could have sought to forgo work requirements in Milwaukee, where jobs are harder to come by. But Republican Gov. Scott Walker chose not to, saying that the requirements would boost the workforce.

“We aren’t making it harder to get benefits — we are making it easier to get a job,” said Laurel Patrick, Walker’s press secretary.

Others, however, say reinstating the requirements makes life harder for people like Hopgood who already face barriers to employment. And, they say, few states have taken the time or money to set up programs that would help people find jobs or get trained.

“If the state doesn’t provide any of these [programs], you’re out of luck,” Bolen said. “And that model doesn’t lead people to get jobs — it makes them desperate.”

About one in 10 food stamp recipients, or about 4.7 million, fall into the category of being able to work and having no dependent children, according to new data from the U.S. Department of Agriculture, which oversees the Supplemental Nutrition Assistance Program, or SNAP, better known as food stamps. On average, their households receive about $191 a month in food stamp benefits.

They are poor, with an average household income of about $3,768 a year. And they are uneducated — one in four didn’t graduate high school, and two in four only earned a high school diploma, according to a January report by the CBPP.

The federal government offers more than $90 million a year for employment and training programs, and requires states to offer them to this population.

But the programs can be as basic or comprehensive as the state wants — from offering advice on resumes and job searching, to providing individualized case management that matches a person with a relevant job skills training program. USDA strongly encourages states to move toward the latter.

If any state offers a model for providing education and job skills to this population, it may be Washington.

The state’s program started small in 2005, in one community center serving just its immediate area, and now serves the entire state in all community colleges and 29 community-based organizations, said David Kaz, director of policy and communications at the nonprofit Seattle Jobs Initiative.

With work requirements back in place in Seattle and surrounding areas starting this month, Kaz said the programs — which include job search instruction, job training, GED prep, English language classes, vocational education and job retention services — should have the capacity to serve anyone who needs it.

Washington is one of a few states that make use of federal matching funds available for establishing programs in community colleges or in contracting with nonprofits to provide job skills and training.

One nonprofit, FareStart, offers a 16-week, hands-on culinary and life skills training program that prepares students to work in the food services industry. The program has more than doubled with the state funding, now serving about 300 people each year, according to Molly Hancock, vice president of programs.

Of the people who enroll, 55 percent graduate, and of those who graduate, 93 percent find jobs within three months, Hancock said.

State data show that, overall, about 70 percent of people who use the state’s programs become employed, Kaz said.

Washington is also one of 10 states that received grants from the federal government in 2014 to test different kinds of employment and training strategies, which could serve as models in the future. The others were California, Delaware, Georgia, Illinois, Kansas, Kentucky, Mississippi, Vermont and Virginia.

While there is evidence in Washington that education and training programs help people rejoin the workforce, there is little data or research that has shown that cutting food stamps motivates people to work.

When the CBPP, for example, looked at food stamp data in 2013, it concluded that receiving food stamps does not create disincentives to work. Yet when looking at public benefits offered during the recession, including additional food stamp benefits, Casey Mulligan, a professor of economics at the University of Chicago, came to the opposite conclusion.

New data available from Kansas, which restored work requirements in 2013, show that work requirements do get people working, said Jonathan Ingram, vice president of research at the conservative Foundation for Government Accountability. The state tracked employment and earnings of adults subject to the requirement, and the foundation is planning on releasing a report with details this winter.

The data show that of the 25,913 who faced the work requirement, 12,807 left the program, Ingram said. Of those, about half found employment within three months. Among those who continued to be enrolled in food stamps, the work participation rate rose from 13 to 35 percent and average income more than doubled, from $1,867 to $4,346 annually.

“That’s the whole point of the work requirement is you want to get these able-bodied adults working,” he said. “What they really need is a good-paying job, not more welfare.”

After Walker reinstated the work requirement in Wisconsin, in April, about 15,000 adults like Hopgood lost their benefits between July and September when they didn’t meet the requirements. In that same period, about 3,200 people who were enrolled in the state’s employment and training program found new employment.

Some look at those numbers and see success, while others see failure. Milwaukee Hunger Task Force Director Sherrie Tussler said she doesn’t think the state is providing adequate support.

With all the need in the community, Tussler said she fears her organization — which is also the area’s food bank — will run out of food.

But Patrick, Walker’s press secretary, said the state is committed to helping people re-enter the workforce, and has spent $50 million on comprehensive employment and training programs.

The state is one of five this year, along with Colorado, Delaware, South Dakota and Texas, that have pledged to provide employment and training programs to anyone who wants them.

Republican state Rep. Mark Born, chairman of Wisconsin’s Public Benefit Reform Committee, said the number of people who found work is impressive. And, he said, the fact that thousands chose not to participate in the state’s program was their own decision.

“If you are an able-bodied adult and you choose not do anything to help yourself, you shouldn’t expect the state government or federal government to provide benefits for you,” he said.

Yet sometimes, states have trouble simply finding people to let them know their benefits are expiring.

Hopgood, in Milwaukee, said it took the state two months to track her down, as she is technically considered homeless. That means she had 30 days to meet the requirement.

“I would think that before they just give you a three-month notice about your life they could explain everything,” she said. “And give people a chance to see if they could find work, or not.”