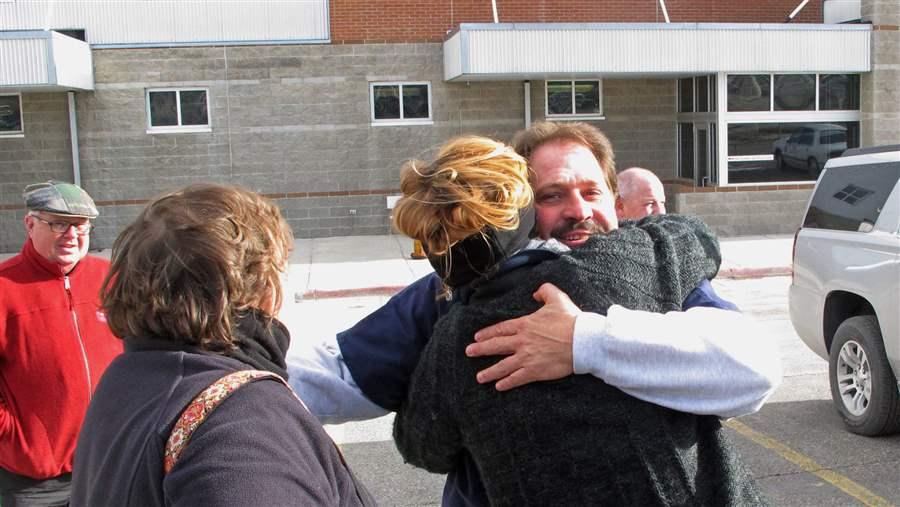 Barry Beach in Montana got one. Gabrielle Cecil in Louisville got one. And actor Robert Downey Jr. in California got one.

They won the holiday-time clemency lottery and, in the past two months, had their sentences commuted or pardoned.

Beach’s 100-year sentence for murder was shortened to time served, 30 years. Cecil’s life sentence for killing her abusive partner was forgiven. And “Iron Man” actor Downey, whose felony drug conviction in the 1990s led to nearly a year in jail, got a pardon for good behavior.

They’re the lucky ones.

Only 15 states, including Arkansas and California, grant frequent and regular pardons, to more than 30 percent of applicants, according to the Collateral Consequences Resource Center, a nonprofit that promotes public discussion of the lasting effects of conviction. The largest group — 21 states, including Kansas, Kentucky and Tennessee, as well as the District of Columbia —provided few or no pardons in the past 20 years. Nine states have a regular pardon process but grant clemency to just a small percentage of those who ask for it, and five states — Louisiana, Maine, New Mexico, Ohio and Wisconsin — grant pardons only infrequently, depending on the governor.

But several governors and state legislatures have moved in recent months to make the clemency process easier and pardons more frequent, reflecting a growing consensus that harsh mandatory minimum sentences have left too many Americans behind bars.

“I do see a wave of mercy rolling across the country,” said P.S. Ruckman Jr., who teaches political science and runs a clemency blog, pardonpower.com. “Over the last 10 years, governors erred on the side of caution, and did nothing” to grant clemency or pardons, Ruckman said. “Increasingly that mindset is changing.”

There is change at the federal level, too.

President Barack Obama, who until November had been relatively stingy with clemency, gave clemency or pardons to 97 people in December before leaving for his Christmas vacation in Hawaii. And in 2014 the Justice Department announced an initiative to encourage people convicted of nonviolent federal crimes to petition to have their sentences commuted by the president. Some 4,000 private lawyers are helping.

Yet despite the flurry of activity, the use of clemency and pardons by governors to ease long sentences or restore civil rights to people who have served their time remains largely a matter of chance.

Your odds of getting a pardon or having your sentence commuted to, for example, time served, depend completely on what state you’re convicted in and, most importantly, on who the governor is.

“It’s wholly dependent on what the governor wants to do, who the governor is, and how safe, politically, the governor feels,” said former Maryland Gov. Bob Ehrlich, a Republican who granted 228 pardons during his time in office.

Ehrlich now campaigns for regular clemency through a partnership with the law school at Catholic University in Washington, D.C., where students help inmates prepare clemency petitions to governors or the president. “It’s all subjective factors. They should not play into it, but they do,” Ehrlich said.

Clemency is the overriding term for several steps a governor or president can take, such as the commutation — or shortening — of a sentence, a reprieve or temporary suspension of a sentence, such as in a death penalty case, or a pardon, which forgives the crime and restores civil rights like voting rights. To get clemency, an inmate, former inmate or family member must petition the state or the federal government for clemency.

In the states, sporadic changes in legislation have begun to streamline the process for getting clemency, and some high-profile governors are starting to address the issue:

Some states like Arkansas, Connecticut and Delaware have a “culture of clemency,” said Margaret Love, the U.S. pardon attorney under Presidents George H.W. Bush and Bill Clinton. “Some states have a pretty good system, but most rely on the character of the particular governor.”

For instance, former Arkansas Gov. Mike Huckabee, a Southern Baptist minister and a Republican presidential candidate, granted more than 1,000 clemencies during his 10 years in office. Arkansas governors have given clemency regularly, Love said.

In contrast, some governors brag that they don’t give pardons, including former Massachusetts Gov. Mitt Romney and Wisconsin Gov. Scott Walker, both Republicans who also ran for president. Walker has said he won't grant pardons to ex-offenders because it undermines judges and juries.

Some governors do grant clemency, but in a dramatic fashion — on Christmas Eve, or during their last days on the job. These last-minute dramas hurt the image of clemency as a fair and structured process, Ruckman said.

For instance, in Kentucky, where governors often grant clemency as they leave office, outgoing Gov. Steve Beshear, a Democrat, granted 201 pardons and six commutations Dec. 7, his last day on the job.

Among those receiving pardons were several women who were victims of years of domestic abuse, including Cecil, who was convicted of killing her partner in 1992 and said that domestic violence led her to do it. She served 16 years before receiving early parole and being let out of jail. Beshear then pardoned her, and said she and nine other women “deserve a second chance at life with a clean record.”

“For eight years, [Beshear] sat on 3,400 applications and did nothing, and right before he left office, he dumps a bunch of them. It casts a cloud of suspicion and makes pardons look like stunts,” Ruckman said. “When did he decide those women deserved clemency? Was it literally the last minute before he left office? Or was it a month ago, or a year ago? How did he let them sit in jail? It’s despicable.”

In California, Democratic Gov. Jerry Brown has regularly granted clemency, although earlier California governors were not so generous. Actor Downey was among 91 people granted pardons after they had been out of prison for at least 10 years and demonstrated they had rehabilitated themselves, Brown said.

There’s a growing bipartisan recognition that the harsh mandatory sentences of the “war on drugs” launched during the 1970s have led to mass incarceration — and mass expense.

Nearly 1.6 million Americans were in federal and state prisons as of Dec. 31, 2014, according to the U.S. Bureau of Justice Statistics (that figure didn’t include those held in county and local jails). While the U.S. represents just 5 percent of the world’s population, the country holds 25 percent of the world’s inmates, according to the American Civil Liberties Union.

That’s why high-profile conservatives such as Charles Koch, the libertarian billionaire industrialist, are in accord with Obama in supporting rare bipartisan legislation in Congress that would overhaul some federal mandatory minimum sentences, give judges more leeway in sentencing and help prisoners re-enter society.

To be eligible for the Obama administration’s clemency initiative, inmates must be nonviolent offenders who have spent 10 years in prison and would receive shorter prison terms if they were convicted under today’s laws. Some have criticized Obama and the clemency effort, which relies on private attorneys, for essentially outsourcing work that lawyers in the U.S. Justice Department would normally do.

“It’s scandalous what’s happened,” said Love, the former pardon attorney. “If this president wants to do it, and he didn’t have anyone on his staff to oversee what’s going on, that’s ridiculous.”

But Mary Price, general counsel of Families Against Mandatory Minimums, is hopeful the clemency effort will lead to more mercy. “There’s no doubt the president has breathed new life into this power that has become quite moribund in the past 20 years,” she said. “There’s definitely a great deal of hope, a great deal of interest and a great deal of prayers.

Dennis Cauchon, editor of The Clemency Report, which works to identify prisoners to be considered for clemency, said the federal initiative, and President Obama’s support for it, will have the greatest effect if it spreads to the states.

Thirty-five governors have “close to unlimited clemency power,” he said, but they don’t use it in a systematic fashion. Cauchon backs a nationwide effort to change state laws to reduce sentences and make clemency a regular duty of governors, rather than one that is subject to the whims of individuals.

The federal effort “sets the pace and frame and what can be done at state level,” Cauchon said. “Governors like to think their hands are tied, but their hands aren’t tied.

“All they need is the cost of a pen.”