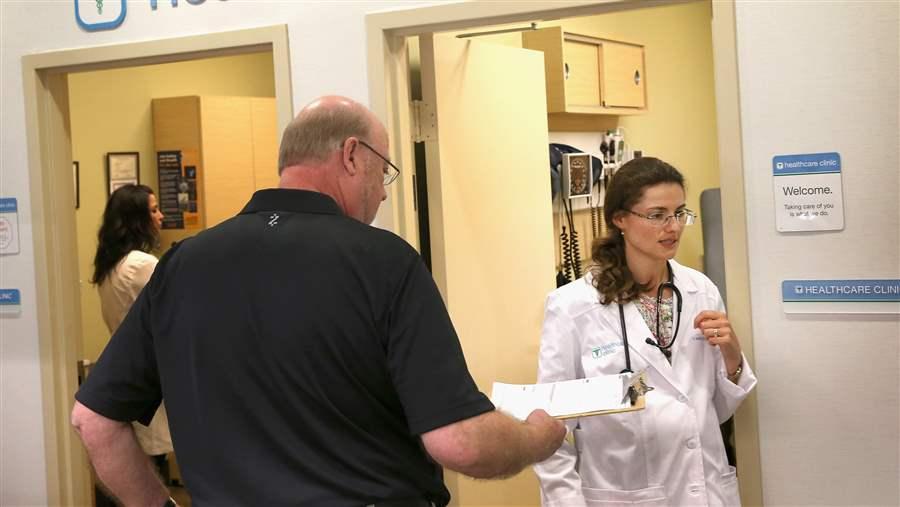 A patient gives a nurse practitioner his health information at a Walgreens Healthcare Clinic in Wheeling, Illinois. As commercial health clinics have spread, states have largely allowed them to operate without regulation.

When walk-in health clinics started spreading rapidly in the mid-2000s, the nation’s biggest and most prestigious medical organizations voiced objections. They raised concerns about patient safety, gaps in patients’ medical records, conflicts of interest and disruptions of the relationship between patients and their doctors.

Doctors also worried that increased competition from the clinics would hurt their practices, which seldom could match the clinics’ convenient operating hours.

Some state medical societies urged state legislators to impose broad regulations on the clinics, including restricting which medical conditions they could treat and setting the composition of their staffs.

With some exceptions — notably Massachusetts — little restrictive legislation has passed. And as the number of commercial urgent care and retail health clinics has multiplied over the past decade to provide care for millions of Americans, much of the institutional opposition to them by physician groups has softened.

“People want what they want and they want it now,” said John Meigs, a family practitioner in Centreville, Alabama, and president-elect of the American Academy of Family Physicians.

Today, there are more than 6,900 urgent care clinics and at least 2,000 retail health clinics, usually wedged inside large retailers such as CVS, Walgreens and Wal-Mart. And they are increasingly providing basic care such as flu shots, and treating patients with colds and broken fingers, many of whom don’t have a primary doctor.

Some studies have found the clinics deliver good care. In Minnesota, for instance, the MN Community Measurement, a nonprofit health research firm, ranked clinics highly in primary care in 2013.

Patient visits to retail clinics grew nationally from 1.5 million in 2006 to 10.5 million in 2014, according to a Robert Wood Johnson Foundation report. As much as 2 percent of primary care visits are to commercial clinics rather than doctors’ offices.

And with the exception of licensing the nurses, pharmacists and doctors, most states have tended to regard the clinics much as they do doctors’ offices and leave them largely unregulated.

“So far, the states have been willing to allow the clinics to run with minimal regulation,” said Katie Witgert, a senior program director at the National Academy for State Health Policy.

Urgent care clinics frequently are free-standing facilities, where doctors treat acute, but not life-threatening, conditions, such as sprains and broken fingers or toes, urinary tract infections, and fevers or the flu.

Retail health clinics provide basic primary care treatment, screening and diagnostic services. In most states, retail clinics are manned by nurse practitioners. In some states, the nurses work under the often remote supervision of a doctor.

Retail and urgent care clinics by definition receive walk-in business. No weeks of waiting for appointments. And typically, they stay open weekends and evenings, when private practices are often closed. Many are located in areas with few doctors’ offices nearby.

The commercial clinics, which emerged in the 1990s and spread rapidly in the 2000s, reflect consumers’ desire for convenience in receiving medical care that conforms to their busy lives. The 2010 Affordable Care Act, which has extended health insurance to 17 million Americans, created an even greater business opportunity for the clinics.

In their early years, most clinics only accepted cash payment, even from patients with health insurance. Today, most retail clinics take private insurance as well as Medicare and Medicaid, according to the Robert Wood Johnson Foundation report.

The rise in the number of clinics didn’t go unnoticed by the nation’s medical establishment. The American Medical Association and its state chapters, the American Academy of Pediatrics and the American Academy of Family Physicians sounded alarms about the clinics: Would they perform procedures beyond their capabilities? Would the clinics detract from patients’ continuity of care, with doctors left in the dark about patients’ medical histories and treatments?

In 2007, the American Academy of Pediatrics urged parents not to use retail clinics to care for their children. That same year, the AMA called on states and the federal government to examine the operation of the clinics to determine if they were putting patients at risk and, in the case of pharmacies, if they were involved in conflicts of interests.

Massachusetts reacted with the most comprehensive laws regarding the commercial clinics, in 2008, specifying which treatments they may provide and prohibiting the clinics from treating children younger than 18 months. The state also requires clinics to develop methods to limit the number of repeat visits to clinics.

A handful of states — Arizona, Florida, Nebraska, New Hampshire and Rhode Island — require licensing for urgent care centers, retail health clinics or both. Licensing subjects the clinic to state health inspections. Florida also requires the clinics to make patients aware of the cost of services ahead of time.

Vermont requires the clinics to see patients regardless of whether they have health insurance. And in New York, the state Department of Health is weighing whether to impose new regulations on the industry to assure fair competition and patient safety.

In 2014, a department planning agency recommended that the state define what urgent and retail health clinics are and what treatments they can give. It also recommended requiring the clinics to use electronic health records. It also expressed concern about the use of the word emergency or derivatives (such as “Emergent-Care” or “Emergi-Care”) in the name of the clinics, fearing that patients with life-threatening medical situations may think the clinics offer emergency services.

New York and the District of Columbia require the clinics to receive approval from health planning authorities before opening.

(About two-thirds of the states require approvals for hospitals, nursing homes and other medical facilities to open or expand to ensure communities do not have an overabundance and therefore unused medical centers and services.)

And 25 states, including California, New York, Pennsylvania and Texas, prohibit the “corporate practice of medicine,” which prevents corporations from employing physicians to provide medical care.

The laws are intended to prevent business interests from trumping medical concerns in treating patients and require commercial clinics to be owned by a medical professional. Typically, retail clinics are owned by medical groups operating under contract with the retail store in which they are located.

For the most part, however, the clinics otherwise operate with little regulation, and physicians’ groups have largely dropped their call for restrictive legislation.

Jim Laughlin, a Bloomington, Indiana, pediatrician who co-authored a 2014 policy statement for the American Academy of Pediatrics advising parents not to use the clinics for primary care for their children, said doctors’ groups like his have bowed to patients’ desires to have the convenience of walk-in clinics for incidental, minor treatment.

“If quality standards are adhered to, they are a safe alternative for minor issues for pediatric patients,” Laughlin said.

He said cooperation between the clinics and patients’ physicians, rather than acrimony, should prevail to ensure health care providers communicate in a way that enhances patient safety.

Meigs, of the American Academy of Family Physicians, said it was fruitless to oppose clinics, whose convenience consumers clearly favor. In response to them, he said, half the nation’s family practitioners now offer extended hours.

Today, a number of hospitals and health systems such as Beacon, in Indiana, and Geisinger, in Pennsylvania and New Jersey, have opened their own retail clinics or partnered with them. The clinics become a gateway to the larger health care system for patients. Hospitals also are able to divert patients with non-urgent problems from their emergency rooms to the clinics.

But doctors remain concerned about gaps in patients’ medical records, and that they may never learn what treatment their patients received at the clinics.

“The concern is that patients will often go to clinics for illnesses or get immunizations or a quickie sports physical and that does not allow us as their primary care doctors to be up to date on their conditions,” Laughlin said.

“Without feedback back and forth, we feel that leads to suboptimal care,” he said. “Often these kids have other health problems. That can be missed by someone not trained to take care of them.”

Many clinics keep a list of primary care doctors in the community who accept new patients, said Tine Hansen-Turton, president of the Convenient Care Association, the industry group for retail health clinics. She also said that many clinics now have electronic record systems, enabling them to communicate easily with primary care doctors.

“We ask our patients if they have been to their primary care provider, do they have a regular source of care,” she said.

And the reality is, she said, that many people simply do not engage in routine medical care. “Sixty percent of all people coming into retail care clinics do not have a primary care doctor,” Hansen-Turton said. “We’re probably the biggest referral to physician practices.”