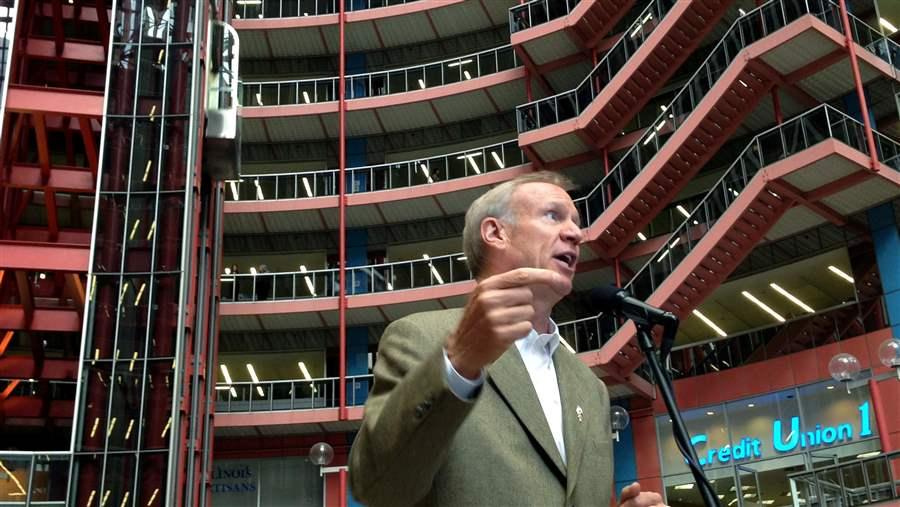 Republican Gov. Bruce Rauner of Illinois inside the 17-story, glass-paneled atrium of the state-owned James R. Thompson Center in Chicago. Rauner, who wants to sell the once iconic building, is one of several governors who think their states are stuck with bad or surplus real estate.

As commercial real estate prices rebound, some states see an opportunity to sell properties not even a governor can love.

“We’ve got a lot of money pits in South Carolina,” Republican Gov. Nikki Haley said of some state-owned buildings in the Palmetto State. “We need to get rid of them.”

She outlined a plan in December to reduce the state’s footprint and sell buildings that are high-maintenance, lack adequate parking, or are simply old and smelly.

Illinois Gov. Bruce Rauner wants to unload a state-owned office building in downtown Chicago that was once called “spectacular” but has now become a white elephant. North Carolina is selling six old houses in the state capital that have stood vacant for years.

Georgia is testing the market to sell an office tower in a prime Atlanta location that was a gift — but has gobbled up $115 million for renovation and maintenance costs. In Louisville, a historic estate is among three Kentucky-owned properties coming on the market as a result of a major bridge and tunnel construction project.

Most everyone agrees that selling surplus properties is a good idea, and states, localities and the federal government often seek to sell buildings they no longer have a use for. But the time has to be right. Many cash-strapped states talked about selling vacant or underutilized real estate during the economic downturn but found few takers at the appraised values.

The real estate market has gradually improved since then. States also have increasingly elected Republican governors and majority legislatures that entered office promising to aggressively cut budgets and reduce the size of government.

In the last four or five years, many states have compiled inventories for the first time or hired contractors to assess their real estate holdings, said Marcia Stone, director of the National Association of State Facilities Administrators.

Now, even states with a budget surplus, like North Carolina, hope to take advantage of hot local real estate markets by disposing of surplus properties.

Even Iconic Buildings Not Easy to Sell

The rules for selling state property vary, but the process is not as quick as calling an auctioneer or planting a “for sale” sign. In many states, individual agencies and universities control their own real estate. Some properties must first be offered to other state agencies or local governments.

Inventories, when they are taken, may not be kept up to date or include information on how — or whether — buildings are being used, according to the National Association of State Budget Officers.

When Haley arrived in office in 2011, she started asking about South Carolina’s state-owned real estate. “No one could tell me what we own,” she said, so she issued an executive order in 2013 to find out.

An audit by CBRE, a commercial real estate firm, uncovered 7,800 buildings with 8.1 million square feet as well as 2,500 parcels of land totaling more than half a million acres. “We don’t need to own that much space,” Haley said.

The firm recommended that the state sell eight buildings, and Haley agreed. She noted that parking is a challenge at the state Department of Education’s Rutledge Building in Columbia, which costs $4 million a year in maintenance. As for the Department of Health and Environmental Control building, also in Columbia: “It looks old. It smells old. Everything about it is not good,” she said. Employees would move to other state-owned office buildings not yet identified.

In Illinois, Rauner wants to sell the James R. Thompson Center, a 17-story state office building in Chicago that the state spent $172 million to build in the 1980s and named after former Republican Gov. “Big Jim” Thompson, who was the state’s longest-serving governor.

It was “easily the most spectacular building ever constructed in the Loop,” the Chicago Tribune’s Pulitzer Prize-winning architecture critic Paul Gapp wrote of the Thompson Center in 1985.

Thirty years later, the open-air atrium is noisy, and costly to heat and cool. State workers complain that cooking odors from the food court drift into offices, according to news reports.

Rauner didn’t comment on aesthetics — “Beauty is in the eye of the beholder,” he said — but he did say the state faces $100 million in deferred maintenance at the Thompson Center. “We can get good value for taxpayers by selling this building and moving out,” he told reporters in October.

Georgia Gov. Nathan Deal, a Republican, led the Georgia Building Authority in voting Dec. 16 to put on the market 2 Peachtree, a 41-story office tower near the Underground Atlanta shopping and entertainment district.

The building was the tallest in the Southeast when it was built, in the 1960s. A foundation gave it to the state in 1992, with the intention of keeping workers downtown at a time when companies were leaving the business district. But renovation and maintenance costs have topped $115 million.

An unsolicited inquiry from a potential buyer spurred the governor and the building authority, which owns the building, to consider a sale.

“Let’s go see what the market will do,” said Steve Stancil, a Republican and a former state legislator who heads the building authority. The market for office real estate in Atlanta is much stronger now than five or six years ago, he said.

When North Carolina Gov. Pat McCrory looks out the front door of the governor’s mansion in Raleigh, he sees the State Records Center, a windowless box that its Web page describes as “not a normal office building.”

McCrory, a Republican, has a sharper critique. He said the building is “crap” and it “looks like a prison.”

The Records Center is not yet on the market. Six vacant older homes in the area went on the market after a report by the Program Evaluation Division of the North Carolina General Assembly, in June, said selling the homes, and 11 other unneeded state-owned properties, could generate an estimated $14.3 million in one-time revenue and save an additional $2.6 million in the future.

The 17 properties identified for disposal were among 49 state-owned properties analysts visited for their report.

“By no means was that an exhaustive list,” said Sean Hamel, senior program evaluator. “That’s what was a little bit alarming.”

The report was also eye-opening for legislators.

“We all knew there were literally billions of dollars in state property assets, and we all had concerns about how they’re being managed,” said state Sen. Rick Gunn, a Republican.

Gunn’s background is in commercial real estate, and he is chairman of a joint legislative committee that was created to act on the report’s recommendations. The committee is preparing two bills aimed at tightening rules for reporting on and disposing of state-owned property.

“I would expect overwhelming bipartisan support” in the legislature, he said. But, he added, “I don’t want to mislead anybody. Agencies need to be more accountable.”

North Carolina will be taking a hard look at whether it makes sense to lease, rather than own, property and whether the state or an outside agent should handle real estate transactions, he said.

Want to Buy a Bridge?

Selling state property can be a chore. In the early 2000s, Illinois identified seven or eight campuses used by the Department of Human Services and correctional facilities to sell. Not one has yet sold, said Rick Tate, statewide facility manager at the state Department of Central Management Services.

“The fair market value appraisal may not always be the value of property,” Tate said.

In Chicago, a developer likely would demolish the Thompson Center, which occupies a city block. Under current zoning, a 60-story office tower could be constructed, Tate said. That won’t happen right away.

“The Thompson Center is currently occupied so it doesn’t at this point meet the criteria for surplus property,” Tate said. “It would have to be vacated or have legislation to allow the state to dispose of it.”

When the New Hampshire Department of Transportation sought bids on a historic bridge in Farmington, in December, there were none. The bridge came with strings.

“The good news is you can buy a bridge for $1. The bad news is you have to relocate it and promise to use it as a functioning bridge,” said Bill Boynton, the department’s spokesman.

Kentucky bought the Drumanard Estate, a 53-acre estate in Louisville listed on the National Register of Historic Places, for $8.3 million in 2012 as part of the Ohio River Bridges Project linking Kentucky and Indiana.

The estate, which includes a mansion built in 1929 and landscaping by Olmsted Associates, which designed New York City’s Central Park, is on the approach to one of the bridges, so a tunnel is being built 80 feet beneath the property.

The Transportation Cabinet planned to sell Grocers’ Ice first, but the only bid came in at a fraction of the appraised value, an agency spokesman said. The agency plans to try again to sell the commercial building before putting the estates on the market.

In South Carolina, Haley said agencies need to focus on their government work, not real estate.

“We just don’t need to be in the real estate business,” she said. Getting rid of the state’s money pits will be “a win-win for everybody across the board.”