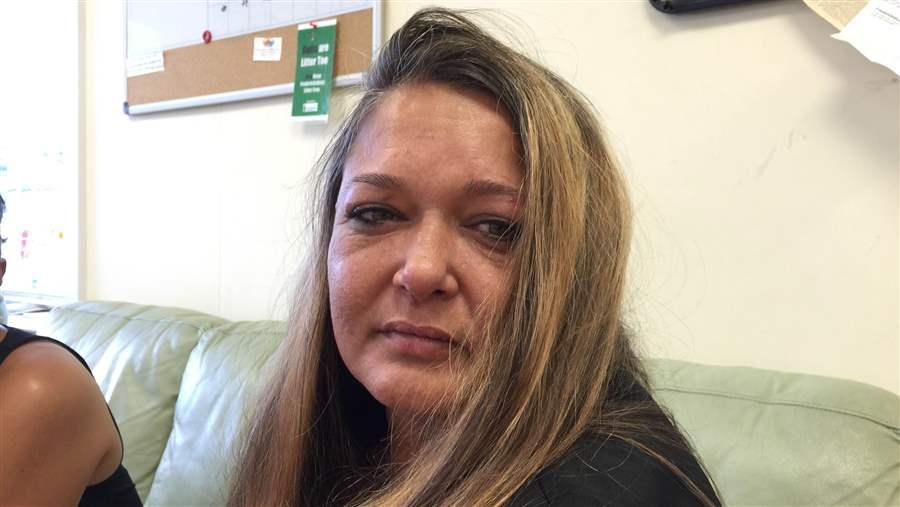 Stella Dempsey lives in a tent in Fredericksburg, Virginia. She says she’s been homeless for years because of physical and mental health issues. States struggle to help people like Dempsey. (Rollie Hudson)

FREDERICKSBURG, Virginia—At the Micah Ecumenical Ministries, in the center of this quaint colonial town, Stella Dempsey sits in the waiting room, looking dejected. Ministry staffers offered her a bed at a shelter, but she says she can’t bear to go back. Still, she’s feeling desperate.

She is homeless and jobless and sleeps in a tent in the woods. She’s got cirrhosis of the liver, high blood pressure, diabetes and a bad back. Two months ago, she said, she almost died. Now, she’s run out of all her medications, from her bipolar meds to her insulin. She is not eligible for Medicaid under Virginia law.

“I have nothing until they give me disability,” the former waitress said, her eyes welling. “I’m hoping for help. I need food stamps, a clinic for my meds. … People look down on people who are homeless. They think we’re nasty and no good. But some of us can’t help it. If I could help it, trust me, I would.”

At first blush, Dempsey, 43, doesn’t fit the stereotype of the chronically homeless. She’s neatly dressed in flowered capris, her hazel eyes rimmed with eyeliner. But in Fredericksburg, as in other small towns, suburbs and rural corners of the country, the homeless are often hidden, out of sight and mind, hard to reach and hard to help, say people who work with the homeless.

This poses a challenge for states. The causes of homelessness in small towns are the same as in big cities: poverty, mental illness, inadequate housing, domestic violence and the psychological wounds of war, according to the United States Interagency Council on Homelessness. But rural areas are more likely to be poor, with limited transportation, making it that much harder for the homeless to get to a center that can provide counseling, a housing voucher or medical care.

A handful of states are making strides toward tackling the issue, although most of the work is done by nonprofits. Advocates say most states are not doing enough and that a different approach is needed to solve the problem of rural homelessness.

In big cities, you see the homeless virtually everywhere, sleeping under a bridge or in the park, pushing around overflowing shopping carts. The rural homeless live in the woods, in tents or in campers, in barns and ice sheds. They crash on a friend’s couch. Or they’re living in a shack with no heat, electricity or running water—usually not far from where they were born and raised. Many of them are employed or underemployed.

“There’s a lot of poverty in rural areas—and there are a lot of families that don’t have their own homes,” said Wendy Kinnear, regional coordinator for the state of Pennsylvania’s Education for Children and Youth Experiencing Homelessness program (ECYEH).

“My frustration is that this isn’t something that people talk about,” said Kinnear, who works with 10 rural counties in northwestern Pennsylvania to identify and assist homeless children and their families. “We don’t get the same funding and support. People are being undercounted—which means they’re not getting the services and funding that they can be tapping into.”

Some states have tried to find innovative ways to combat rural homelessness.

This July, Virginia, which has a large rural population of nearly 2 million, will launch its Housing Trust Fund to encourage affordable housing. The $8 million fund (for 2015 and 2016) allocates $1 million for a competitive homeless reduction grant, according to Kathy Robertson, associate director of homeless and special needs housing for the state.

In North Dakota, where homelessness has skyrocketed after the oil boom created a housing shortage, legislators created a Housing Incentive Fund, allocating $35 million in 2013 to encourage the development of affordable housing. But that fund was depleted within five months.

“We need market forces to drive housing costs down,” said Michael Carbone, executive director for the North Dakota Coalition for Homeless People. “But there’s a reluctance on the part of legislators to put money into affordable housing. They’re afraid it’ll overdevelop. But there’s no reason why a small town here should have Manhattan-level rents. It’s crazy.”

Most help for the homeless is funded by the U.S. Department of Housing and Urban Development (HUD), which goes to the states and then is distributed to local agencies. Population determines where funds are allocated. In rural areas, there are fewer continuums of care (CoC), local, community-based organizations that are responsible for coordinating aid for the homeless, usually with federal funding distributed by the states. Fewer CoCs means fewer homeless people are being served, Kinnear said.

HUD set aside $30 million for a competitive grant to tackle rural homelessness. But the agency didn’t get enough applicants to send money to rural areas, according to Ann Oliva, director of HUD’s Office of Special Needs Assistance Programs.

Most big cities have a well-developed infrastructure for helping the homeless, with dedicated funding for programs and an extensive network of providers, said Steve Berg, vice president for programs and policy for the National Alliance to End Homelessness. In more rural areas, there might be a program in town or a couple of shelters run by a church. One CoC could be responsible for handling vast swaths of a state, Berg said.

“There’s not really a system for dealing with rural homelessness,” Berg said. “The person at the local food bank might be trying to figure out what to do about homeless people. In some places there are shelters; in others, there are none.”

The bulk of state funding for its homeless populations goes to big cities, advocates say. Andrea Sheesley, of Pennsylvania’s ECYEH program, says that funding for homeless children in the region she serves as coordinator was cut by 75 percent last year, while funding in the big cities like Erie and Pittsburgh increased.

Many homeless people say that even when services are to be had, they are tough to access.

The local homeless agencies haven’t been much help, said “Alan,” who asked not to be identified for fear of being ostracized by the agencies in Fredericksburg. “They only help some people,” Alan said. “They have their favorites.”

He said he’s been homeless for two years, after a judge slapped him with $7,000 in court fees because he failed to make full child support payments after construction jobs dried up. He said he sold his truck and got rid of his apartment to pay the court fees. It was that or jail. “I told the judge, ‘You’ve now made me homeless.’ He said, ‘At least you’ve paid your child support. Don’t ever be late again.’ ”

Alan, 46, who has his own handyman business, said he has worked the whole while, paying $1,049 in child support each month. Because of that, he said, he’s had a hard time saving enough to cobble together the first month’s rent and security deposit needed for an apartment.

For now, he works during the day and sleeps under a church’s stairs at night. The pastor doesn’t mind, he said, as long as he’s gone by morning. “It’s amazing what you get used to,” he said.

It’s hard to get a handle on just how many homeless people live outside big urban areas. Counting the homeless has always been tricky, and tracking methods vary among federal agencies.

When it comes to counting non-urban homeless populations, HUD bundles suburban and rural populations. By that count, roughly 28 percent of the nation’s homeless live outside big cities, according to HUD’s Oliva. Meanwhile, the National Alliance to End Homelessness places the rural homeless population at 7 percent. It estimates that 14 out of every 10,000 people experiencing homelessness live in the country, compared with 29 out of 10,000 living in the city.

The rural homeless are more likely to be white. More women in rural areas are homeless, about 42 percent of the homeless population compared with 35 percent in cities, according to Oliva. In the country, you’ll see more homeless families than singles, and more youth under 18, she said.

For some of the homeless in the nation’s small towns and suburbs, it’s hard to find a shelter. But once they do, shelters can provide a way out.

Michael sits in the basement of St. George’s Episcopal Church in Fredericksburg, where, every Monday, the doors are thrown open for a “community dinner” where any and all are welcomed to get a hot bite to eat. Other days of the week, other churches in town return the favor.

“I am a disabled vet,” said Michael, 61, who preferred that only his first name be used because of his circumstances.

There was a time when Michael, who said he served in Vietnam, was doing just fine. He said he went back to school on the GI Bill, worked for years as a welder and a mechanic. He even bought a house. But somewhere along the way, he lost the house. He hurt his back, suffered from post-traumatic stress disorder and depression, and fell behind in his child support. His paycheck was garnished and suddenly he didn’t have the money for rent.

“I didn’t sleep under a bridge, in a bus station or in the woods,” Michael said. “I had places to stay.”

But to get the help he needed, to get on disability, he decided to enter the system. First, he signed up to stay at the local shelter so that he could be classified as “chronically homeless” and be eligible for housing assistance. The Micah center in Fredericksburg helped him find an apartment and a landlord who didn’t mind tenants with a history of homelessness, and it paid his first month’s rent and security deposit. Now, he volunteers at Micah, giving back what was given to him.

“Since I was able to establish my own place, I don’t have to be in that [homeless] clique anymore,” Michael said. “But I don’t forget where I come from.”